Do you ever have one of those days where you think, “This is the worst day ever. It can’t possibly get any worse. This sucks.”
But later, in reflection of the events of the day, it just doesn’t seem that bad. As it turns out,  you see it as an adventure and you’ve forgotten all about the horrors, just like women supposedly forget the pain of childbirth (otherwise why the hell would anyone ever do that again?).

We had one of those days while we were in Cambodia.

It started out innocently enough, just a “quick 5 hour boat trip from Siem Reap to Battambang on a private boat.” That sounds nice and relaxing, doesn’t it?
I’d heard horror stories about the Boat to Battambang before but those were all in the dry season when the water was low. Here we were at the end of the rainy season and the water was still plenty high.

The short version is that our five hour tour turned into a 12 hour ordeal which included the captain getting us lost and the boat breaking down. Twice. Oh and did I mention there was no toilet on this luxury cruise?

Before someone gets their panties in a bunch about my whining here, let me refer you back to the top paragraph. It’s all good now, and even in the moment I was contemplating peeing in the Happy Cooler out of desperation, it really was a fascinating experience and dare I say it, fun.

Come along now on our 12 hour journey…

6:30 AM-We are all up early and ready to head to Chong Kneas fishing village where we are to meet our boat. There are seven of us along for the trip; my mother, Lori, Nora and Mark (recent collage grads who are living in the guesthouse and volunteering for 3 months with the foundation), and Jessica and Steve (transplanted Vermonters volunteering in Siem Reap this year). 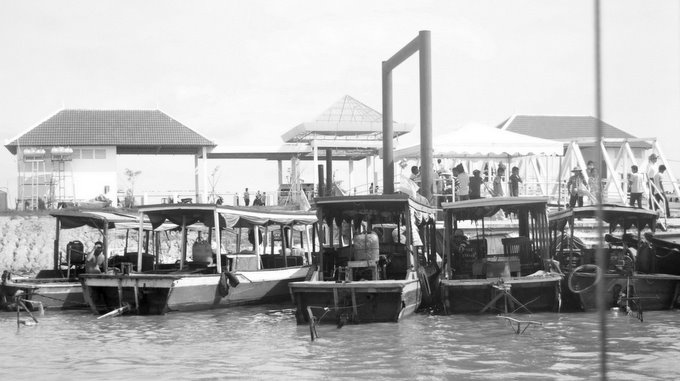 8:00 AM-We arrive at the docks at Chong Kneas and are enveloped by the chaos there. This used to be a sleepy fishing village until a Korean company took over and built a new dock for tourist boats to take busloads of tourists out onto the Tonle Sap lake. We had to pay a “fee” of $2 per person just so our private boat (not part of the local boat mafia) could dock there to pick us up.

Our boat was not exactly as I’d expected. I thought it would be larger, with a lounging platform and a toilet. Instead, we barely had enough room for the eight folding wood chairs with cushions (two rows of four) and our bags underneath a wooden roof. Our captain’s name is Sophean and he’s a skinny little dude in a striped dress shirt with an open, bright smile.  He’s got a first mate who is older, a bit more rough around the edges and who never smiles or takes off his hat. 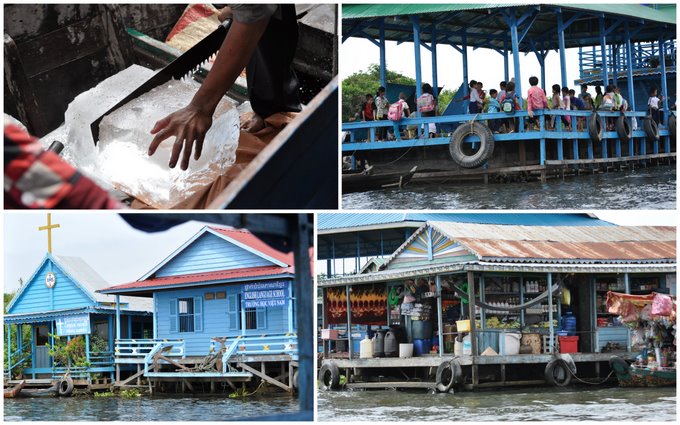 We got going and headed out quickly. It’s a scenic half hour trip out to where the lake opens up and along the way we were able to see the regular village life along the water including homes, schools and businesses all floating. We stopped once to buy some block ice for the boat’s huge chest cooler and the smaller “Happy Cooler” Lori had brought along. 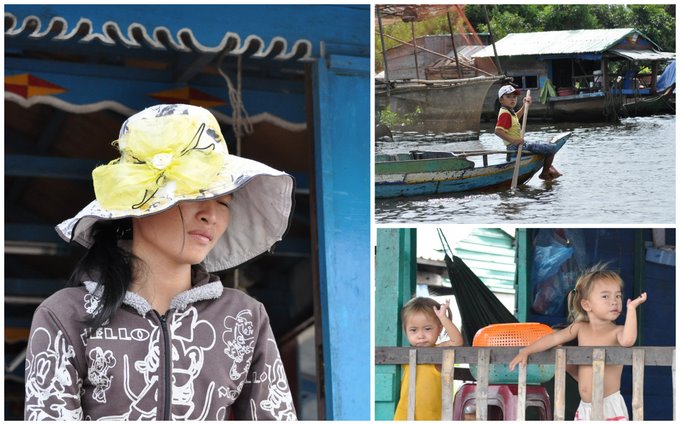 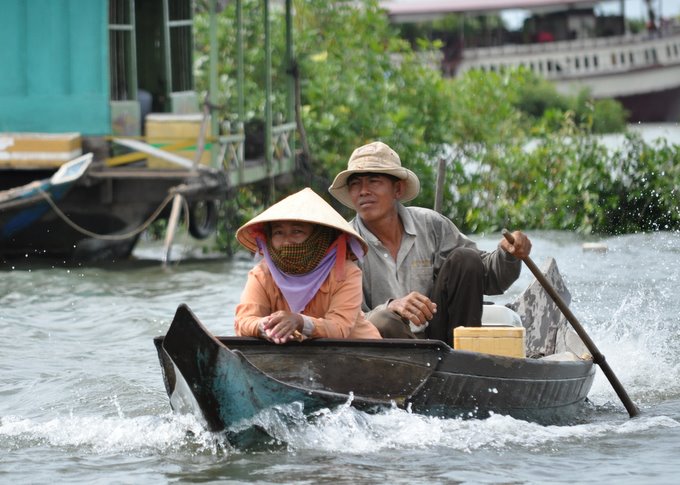 9:45 AM-We’re out in the middle of the lake and the boat suddenly stops. The captain asks a local fisherman something and the guy replies with what we can only assume is something along the lines of “Do you know where you’re going?” and “Are you crazy dude?” It takes a couple of tries but the captain and his assistant finally get the boat restarted. We motor though some tall reeds, occasionally stopping to untangle the propeller. 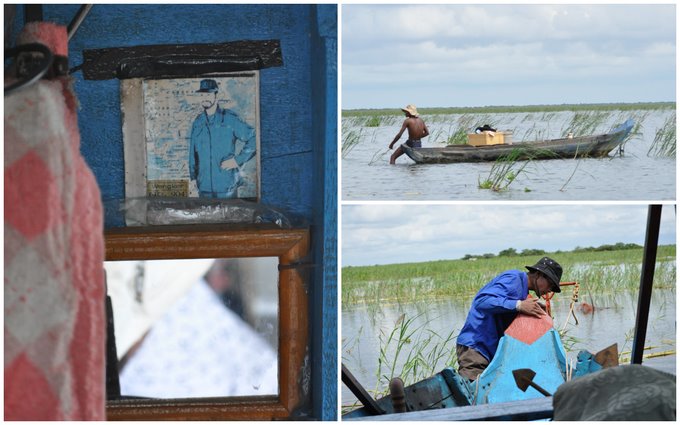 10:30 AM- We come across another floating village where we stop for about 15 minutes so everyone can use the toilet in some sort of public official building. Soon we’re off again and we get about 100 yards outside the village when the boat stops dead in the water. There we sit for an hour and a half while the boat floats in a circle, a monsoonal rainstorm moves in, and the captain strips down to his underwear (Calvin Klains) to jump in the water to fix the propeller with little more than spit and tape.
We’re prepared and everyone tries to remain unconcerned by the delay. There is plenty of food (peanut butter and jelly sandwiches, fruit, Pringles), water, and beer. I have my Kindle, so I’m happy. Lori does some work on her laptop, others read or just watch life float by.

Noon-Finally, we’re moving again and shortly we get to another village where we stop and pick up a new propeller (the captain has called ahead). There’s a party going on nearby, with raucous Khmer pop music and obviously lots of alcohol. This is a holiday weekend after all. The partygoers wave to us and motion us to stop and join them but we stay in the boat. Check out the guy’s dance moves in the short video below!

2:15 PM- We’re stopped by impassable vegetation in the water. The locals tell Sophean to go back and go around another way. We do and we spend about 45 minutes going up another river tributary only to get to a point where he has to stop again and ask for directions. Something is clearly wrong and due to the lack of communication all we know is we are headed back the way we came.

3:45 PM- Apparently, Sophean missed the canal turn back at the last village and we had to turn around and go back. Finally we are headed though the “canal” which goes though a floating forest of submerged trees. It’s only wide enough for the boat and stray branches whip inside at so we all have to lean toward the middle to avoid being hit. Still, everyone get slapped at some point, including me, right in the face. At this point we’re starting to become aware how late it is and that it’s unlikely we’ll make it to Battambang before dark.

4:30 PM- We come out of the floating forest and the sun is starting to go down. It looks like the captain isn’t exactly clear which direction he needs to go next. He picks a direction and goes for it.

4:50 PM- The boat dies again and the sun is setting rapidly. We tie up to a tree and Sophean goes back in the water. Steve stands at the back of the boat with a flashlight to help out. Jessica calls her daughter who is waiting for us in Battambang with her Khmer boyfriend. They are all supposed to go out to his village for the holiday, but it looks like we may be spending the night on the boat at this point. It’s a bit ironic that we are out in the middle of nowhere, but everyone with a local phone can get a signal.

Lori calls her Battambang tuk tuk guy, Mr Kim, and asks him to talk to the boat assistant, who at first refuses to speak on the phone. Finally he’s convinced to talk to Mr Kim and tell him where we are (after asking another local fisherman). Mr Kim relays that we are still at least another hour and a half outside Battambang.

5:00 PM- By now it’s almost full dark and the mosquitoes are coming out in force. Everyone douses themselves with repellent and tries to cover up as much as possible. I have nothing with me with long sleeves so I wrap my arms as best I can with my krama (Khmer scarf) We’ve eaten most of the food we’d brought with us and we start to discuss the possibility of having to spend the night on the boat. At this point, I don’t care, but I’d really like to pee and am envious of the men who can stand off the back platform and let fly without showing all to the world.

5:30 PM- The new propeller is on and we’re moving again, albeit slowly. It’s getting darker and darker, but fortunately the boat has a large and bright halogen light on the front and they turn it on and off to help guide our way. The captain turns on the inside light on the boat but we ask him to turn it off because it just attracts bugs and would allow us to see outside.

6:30 PM- The boat is limping along, but still nowhere near the city. We keep passing by small villages all floating on the water. It’s fascinating to watch the evening life unfold along the river. People are eating, bathing, and some of the houses which are little more than shacks have the distinct glow of a television (hooked up to a car battery) coming from inside.

7:30 PM- We’re getting closer to the city now, but we keep heading up river. There’s some concern we’ve missed the dock and/or are again lost. There’s not much we can do but wait and see.

8:00 PM-There’s a shout from the river bank to our right! We’d almost missed the small dock but now we are here, 12 hours after leaving the dock in Chong Kneas. We’re exhausted, hungry, and after having been on the small boat for so long, walking like drunken sailors once on dry land.

We split off from our travel companions and Mr Kim takes us by Tuk Tuk to the lovely La Villa hotel on the river where my mom, Lori and I have two rooms reserved. Our room is absolutely enormous (more on that tomorrow) but we hurry down into the hotel’s restaurant to order the last meal of the night before they close. We are simply too tired and hungry to make it to the night market as we’d planned.

8:30 PM– A nice bottle of Australian red wine, a couple of steaks, lamb chops, french fries and all is right with the world.

Just like that, it’s not so bad, and we simply shake our heads in disbelief and laugh at the experience. Tomorrow it will just be another story to tell, another adventure, another day in Cambodia.

How to Prepare Kids for First-Time Travel