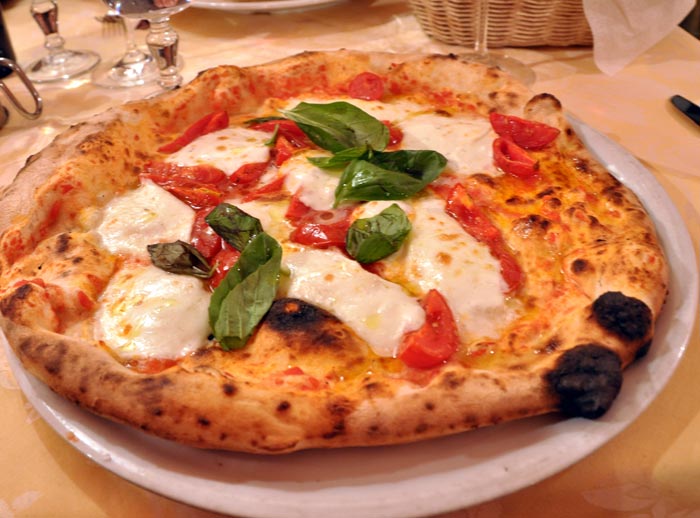 I have a personal rule regarding restaurants; I’ll never willingly wait in line to eat for more than half an hour. I simply refuse to buy into the hype that any restaurant is worth waiting an hour or more for when there are plenty other great places out there. So it’s with this rule that I now must admit that I committed foodie heresy in Naples: I did not eat pizza in one of the famous pizzerias. That’s not to say I didn’t eat pizza, just I just didn’t have any at Da Michele, Gino Sorbillo, di Matteo, or any of the other places with long lines and hour plus wait times. And I’m ok with this really, because we still ate very well in Naples as evidenced by our experiences below.

This place, located across from Piazza Bellini and underneath the archway leading to the street connecting to Piazza Dante was somewhere we ended up eating twice and having vastly different service experiences each time, though the food was consistently good. 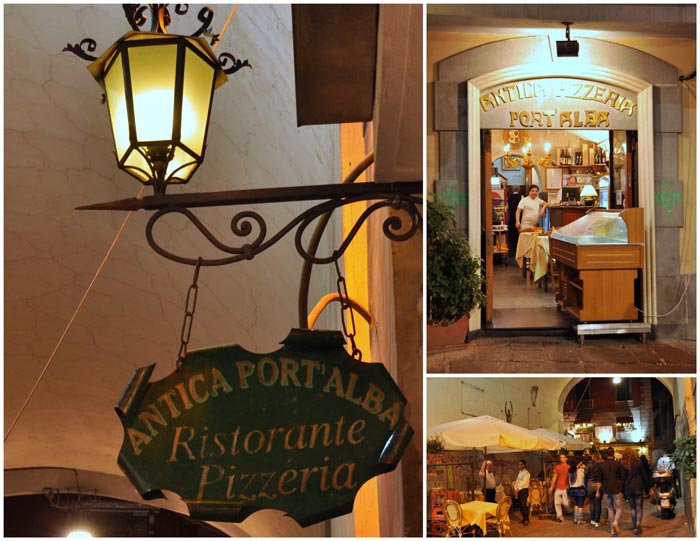 We ended up here on our first night in Naples with me, jetlagged and ticked off because I’d forgotten to print out my researched list of restaurants and no way to access the info without working internet. We wandered around the area, looking at menus, searching for something which appealed and wasn’t too touristy. Finally, we gave in and sat down in Antica Port’Alba’s patio under heat lamps. Our waiter was pleasant and brought us menus in both Italian and English. 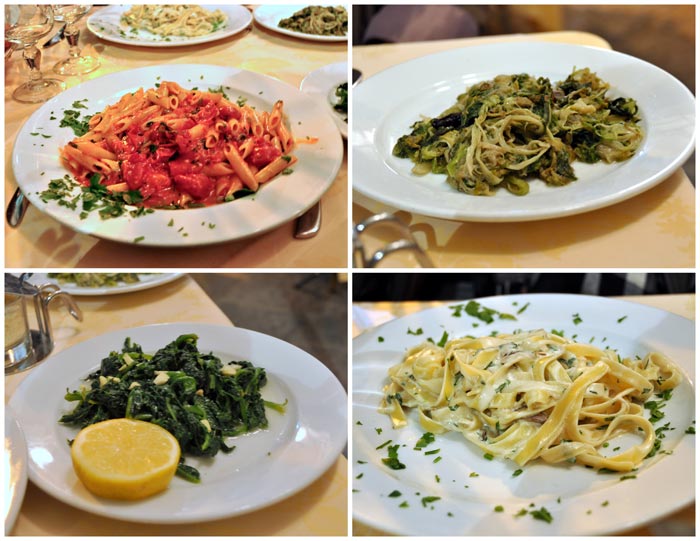 Wrecked from not sleeping for almost 30 hours by this point, I ordered my old standby, Penne alla Arribiata, pasta in a spicy tomato sauce. This is one of those classic dishes by which you can judge a restaurant. It’s simple, but they have to get it right and fortunately, they did. Mom had a very tasty Fettuccine with Porcini mushrooms in a cream sauce, but the stars of the meal were the contorni (vegetables) we ordered. The first was a side of escarole, sauteed with anchovies, capers, and black olives, served warm. This dish was absolutely fantastic, all the salty additions contrasted so nicely with the bitter greens (note to self; try this at home and post on FormerChef). We also had spinach sauteed with chunks of garlic, olive oil and lemon which, while served surprisingly cold, was still very tasty. Finally, the house red wine was shockingly good. Our meal was about 40 euro total, and when the waiter presented us with the check he made sure to say not once, not twice, but three times that service was not included and that there was “no tip for the boys” included in the check. Sigh. It’s stuff like that which can really be a turn off as a tourist. I mention this because Italians rarely tip, and if they do it’s small. A waiter would never say something like this to a local and if you don’t believe me, keep reading.

The next night we met up with the lovely Bonnie from Napoli Unplugged (an excellent resource for all things Naples, go there) and her charming husband for drinks in Piazza Bellini. Afterward, they suggested we go have dinner and Bonnie said there was a restaurant nearby she’d been meaning to try. Wouldn’t you know, it was Antica Port’Alba. This time we ate inside, upstairs, with Bonnie who has lived in Naples for 6 years, doing most of the discussion and ordering in Italian with our server. Tonight I ordered pizza “DOC” with tomatoes, basil and local buffalo mozzarella (photo top of post). It was good, but it did not rock my world. Mom had Pasta Siciliana (which is essentially alla Norma) with eggplant and we had another order of the escarole which was just as good this time. There was more food on the table and everyone seemed to enjoy it, though I can’t remember what it was (another pizza, pasta vongole, etc). We drank more of the house red wine and a fantastic grappa called Grappa 903 Barrique. I liked this grappa, and I usually think grappa tastes like gasoline. A good time was had by all, even our waiter who chatted at length with us (in Italian with Bonnie translating), regaling us with stories of his large family (12 kids?), saying when he was a kid his father “didn’t watch TV for a decade because he was too busy in bed with his mother.” Yes, really. At the end of the meal there were more complimentary rounds of grappa and there was no mention of tipping or service charge. The meal was about 90 euro for 4 people.

Sunday lunches are big in Italy. Both in restaurants and at home, families gather to eat a big meal at Sunday lunch. This was very clear to us at Hostaria Toledo, where, as we ate, the restaurant filled to capacity with families.

We arrived around 12:30 and they were still mopping the floor. They asked us to come back at 1pm when they opened. We obliged by walking around the Spanish Quarter and checking out a few other restaurants “just in case” but ended up back at Hostaria Toledo. 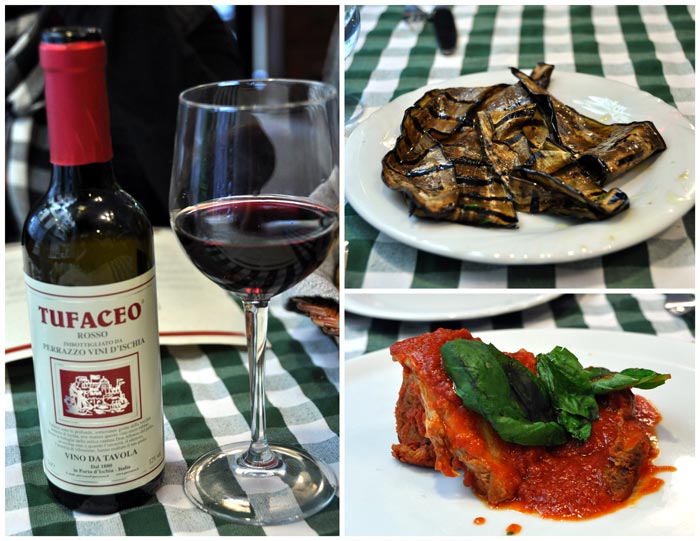 We ordered a very simple lunch to share; octopus salad, grilled eggplant, and an order of carne al ragu (similar in concept to this pork ragu recipe of mine, though not served with pasta here), plus a half bottle of Tufuceo red wine from Ischia and a bottle of sparkling water. 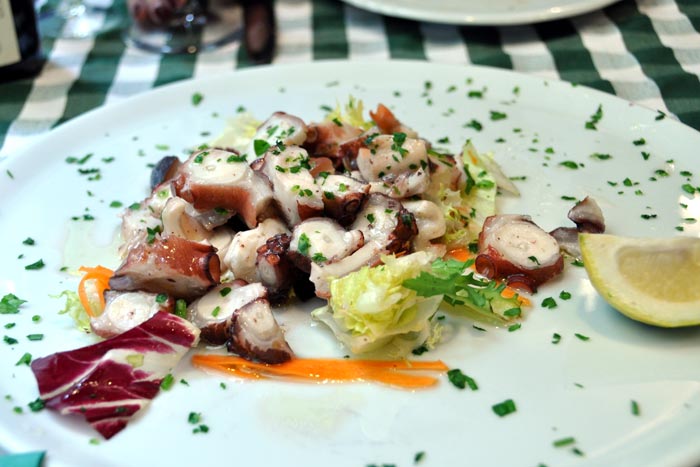 I can easily say the octopus salad was one of the best I’ve ever had. It was perfectly cooked and tender, sweet, and nicely seasoned with lemon juice and olive oil. It was a generous portion for 10 euro. The eggplant was not my favorite because it was sliced so thin, then grilled and marinated, that it was chewy and charred and almost too tough to cut, but the meat was good. I would return for the octopus salad alone. While eating out lunch, we watched big platters of fried food (mixed vegetables and seafood) go out to the tables filled with families for their Sunday meal and I’d try one of those next time because they looked amazing. Lunch was 34 euro.

This place is right on Piazza Dante and we went for lunch after visiting Herculaneum. They have a 10 euro lunch special menu which includes a pasta or soup, main course, vegetable side, wine and water. The restaurant is lovely inside with lots of light, pale yellow walls and white tablecloths. Oh, and they have free wifi too (just ask for the password)! 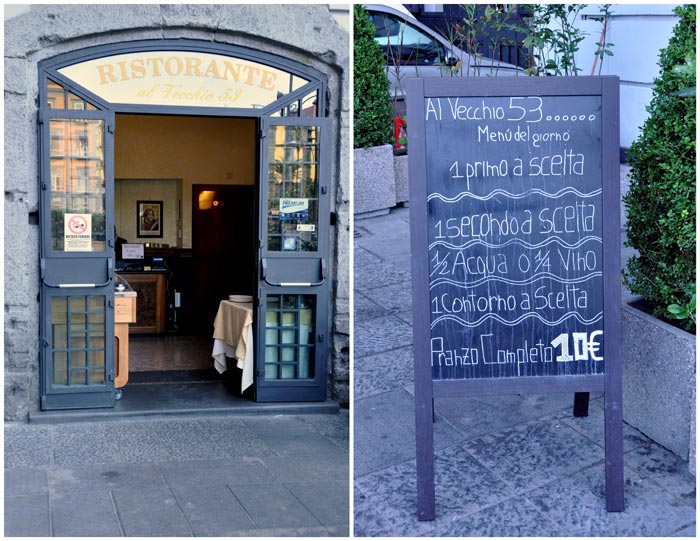 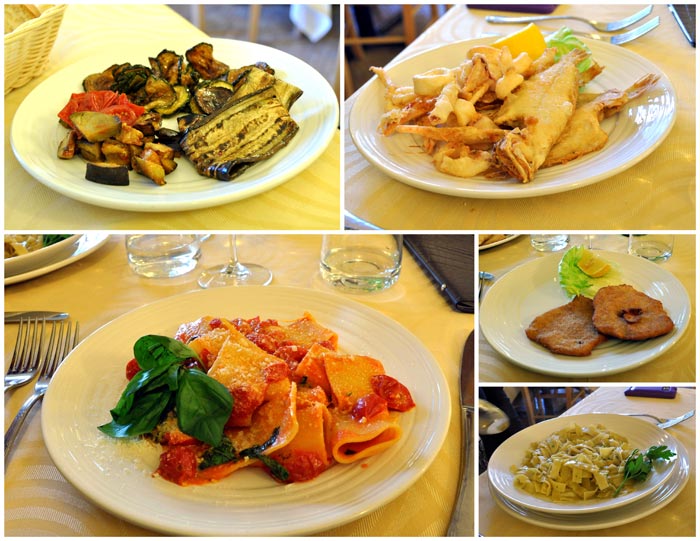 My pasta was large tubes mixed with buffalo mozzarella and tomato sauce. Heavy, but really tasty. Mom had a local speciality of pasta made with garbanzo bean flour. She liked it (I didn’t). She had a mixed fried fish plate and I had pork cutlets and with mixed marinated vegetable antipasti for our side. All together, an obcene amount of food for 10 euro each.

This place gets a lot of excellent recommendations on chowhound.com so perhaps we had high expectations. We went here for dinner on our last night in Naples. The menu is attempting modern and creative Italian food, but in the end my impression was that they were trying too hard and not able to deliver.

I ordered “breaded eggplant with ricotta and vegetables” and while the inside was ok, basically ricotta and vegetables, the outside was a hard and tasteless cornmeal crust. My mother ordered “Potato Eggplant Pie” which showed up as a brick, again coated in a hard cornmeal crust. The inside was basically just mashed potatoes with about a tablespoon of ratatouille.  It was 95% potato with essentially no eggplant. She ate about a third of it and asked for a menu, ordering a grilled vegetable plate. Our server asked if she was done, took her plate, and never asked if she was happy with the “pie” or why she did not eat all of it and was asking for something else. They brought the vegetable plate,  which I cannot even begin to describe because there were so many components, but I’ll let the photo speak for itself.

In the end, this place was a disappointment with over-wrought food and indifferent service. We should have ordered the salumi platter and wine and probably would have been happier.

Our plan had been to eat at Osteria La Chitarra that night. Using a route plotted by Google Maps, we walked from the apartment through what turned out to be some sketchy alleyways, only to find a closed restaurant. At that point, we remembered Bonnie’s husband had recommended a place which was fairly close by, Ristorante Mattozzi Europea, so we walked there. 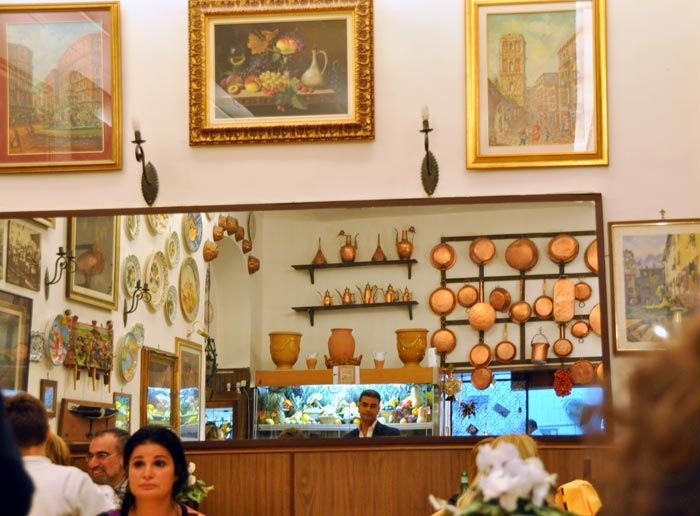 We found a warm and inviting place, walls covered with copper cookware, old paintings, ceramic dishes and a large mirror. We ordered a light meal from the man who appeared to be the owner; seafood salad, caprese salad and polpette with ragu. While we waited for our food, I eavesdropped on the two men sitting next to us. One was describing Neapolitan cuisine to the other, in Spanish, and I realized I could understand almost everything he was saying! A moment later, I figured out why; he was speaking slowly and clearly because he was Italian and Spanish wasn’t his first language (his dining companion was from Spain, by his accent).  It was odd to listen to someone speak Spanish, but with a Italian accent. 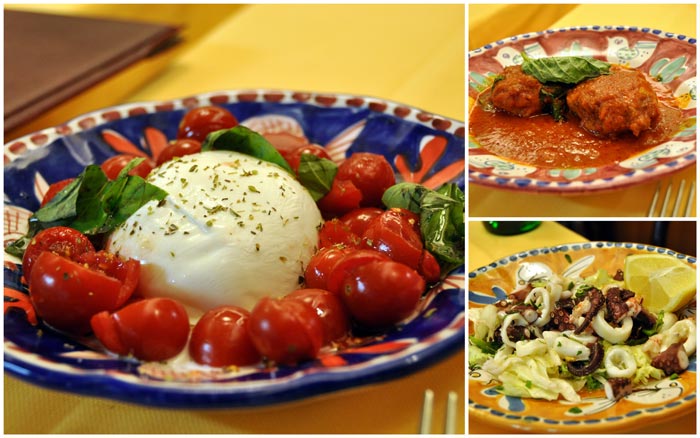 When the food came, the caprese was a single large ball of the incredible local mozzarella, ripe cherry tomatoes and fresh basil leaves. The seafood salad arrived with the squid and shrimp still warm, and while that was unexpected it was good (though not as good as Hostaria Toledo). The polpette were two large meatballs covered in ragu with a slightly smokey flavor. They were made from veal, and clearly had a fair amount of breadcrumbs and cheese mixed in (perhaps the cheese was smoked?). With a glass of wine, water and a 5 euro service charge, dinner was 43 euro.

La Cantina is popular with locals who come in for a leisurely lunch and with doctors and med students (as evidenced by the scrubs) from a nearby hospital who come in for food to go. The place is family run; the owner gave us our menus and took our order while mama stood eagle-eyed on thick ankles (I wanted to make her sit down and rest) watching both the kitchen and the dining room and dishing up items from the antipasti case. The menu is very reasonable with items starting at 3 euro and nothing over 9 euro. 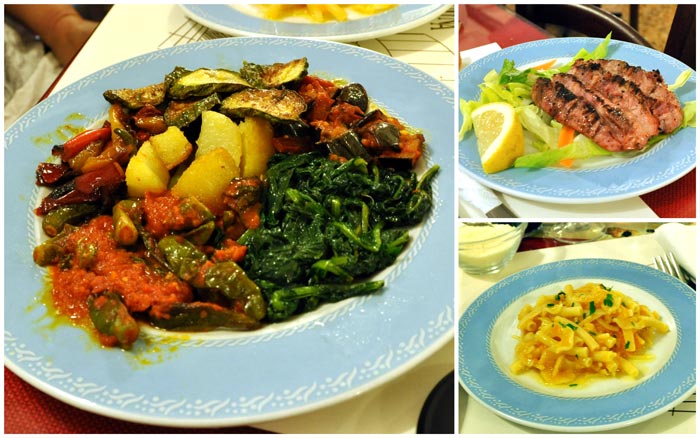 We ordered pasta e zucca (pasta with pumpkin) which arrived considerately split on two plates, grilled sausages, and a large mixed antipasti plate. The food is home style and everything we tasted was very good. The restaurant is only a few blocks from the Archaeological Museum and would be a great place for lunch before or after a visit. I would definitely return. Our lunch, with a quartino of wine and bottle of water was 22 euro.

La Cantina de Via Sapienza Via della Sapienza, 40/41, 80138 Naples, www.cantinadiviasapienza.it I’ve read they are only open for lunch but neither their website nor menu confirms this. Free wifi! 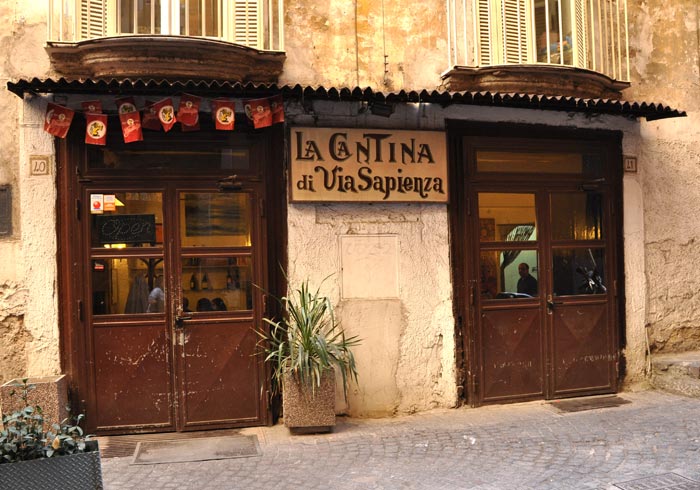