Have you ever been standing in an endless immigration line after a long international flight and seen the flight crews go through a special line and bypass the queue? Were you cranky and tired and more than a wee bit jealous? I know I was. That’s why when I heard about the US Customs and Border Protection’s new Global Entry program I knew this would be something we’d want.

At first I thought we might not travel enough to make the expense worth it, but then I did the math:

10 minute interview at the airport US Customs office, given by very nice guys wearing guns.

Not waiting in line at immigration or filling out customs paperwork after a 17 hour international flight?

That’s $20 a year, so you don’t have to wait in line, or $10 per trip if you do an average of 2 international trips per year as I do. If you do more than that, it’s a no-brainer, really. And if you have a Platinum AMEX card (alas, we don’t) it will reimburse you for the $100 fee.

In addition, there is a new pilot program for expedited TSA pre-screening which means if you are already approved for this program you may be able to go though a special security line at the airport. There’s been news of the expansion of the program over the next year or so.

Another advantage of being a trusted traveler is when you have to go through immigration and then catch a connecting flight. I can’t count the number of times I thought I might miss my connecting flight because I was stuck in a huge immigration line (hello Atlanta and JFK, can you hear me?). With the Global Entry program, you don’t have to worry.

On the way back from Rome, my mother and I flew through Toronto where if you are making a connection to the US, you must go through immigration and customs there, in Canada, before your flight. My mother already had Global Entry and I didn’t. We waited in line for over an hour while the kiosk was empty. At that point I knew I had to sign up before our next trip.

Our process was quick and painless:

February 5th
We filled out our online applications. Yes, the application is a little tedious, and if you’ve lived or worked in more than one place in the last 5 years, be prepared to have a list of names and addresses handy. One of the questions is to list all the countries outside the US you’ve visited (besides Canada and Mexico) in the last 5 years. I was shocked to dicover I had 10 and some of them we visited multiple times (Italy, Cambodia). There are some reasons why you could be declined and they are outlined on the Global Entry web site.

February 8th
We each got an email stating we had been conditionally approved and we needed to book interview appointments.

February 10th
We received reminder emails to book the appointment with the stern warning “To prevent your application from being denied, please schedule an interview immediately.” Yikes! Interviews are done at the airports around the country with Global Entry access points. While there are no interviews done on the weekends (at LAX) I was pleased to see that schedule times were available up to 10pm M-F. David and I got two spaces next to each other at 9:00 and 9:20 pm on a Thursday night. 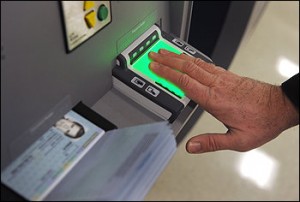 We drove to LAX and arrived early for our interviews. The office is right there in the Tom Bradly International terminal and there was no wait when we walked in so I was interviewed early. The interview was simple and included a webcam photo and fingerprint scan. We each got a sticker in our passport and were told we’d get a card in the mail. We were then given a demo of how to use the kiosk to scan our passport and fingerprints and answer a few customs questions. And that was it. We were out of there by 9:10 pm.

By the time we reached the car we had emails which said we’d been approved.

I’m looking forward to putting this to the test when we return from Istanbul in April and will report back. In the meantime, what are you waiting for?

Our cards came in the mail today, less than three weeks after we applied!

A Visit to Paestum's Temples and Archaeological Museum