Waiting to go inside.

I’m just going to say this up front; this was the last thing we did and probably my favorite experience of the trip. And it’s a little odd that it has nothing to do with food, right?

We arrived at Santa Cecilia to find it closed for a mid-day break.
My tip; get there when they open in the morning, or after mid-day break and head right for the crypt.
There were a couple of dozen people waiting, some clearly part of a tour group, when a nun in full habit arrived to open the locked doors to the church from within. We were there to see the crypt and headed there as soon as we entered the church.

How to get into the Santa Cecilia Crypt

The entrance is inside the tiny gift shop to the left as you go through the front doors. There is a small fee for seeing the crypt. I paid the nun and she handed me a heavy key and spoke to me in Italian. I didn’t quite understand what it was for, but I figured we had to unlock the door to enter and that I’d bring her the key right back.

It is said that Saint Cecilia was an aristocrat and an early Christian who was martyred in her home in AD 230. The church which stands in Trastevere today is built on top of that home, which was used in her time as a secret place of worship. The remains of a tannery can also be seen in the area beneath the church.

The first church on this site was founded in the 4th century and the present church was first built in the 9th century. Cecilia’s remains and those of her husband and his brothers were moved here from the catacombs of San Callisto. When her remains were exhumed in late 1599 during a restoration, it’s said they were perfectly preserved with clear markings from her attempted beheading. The statue of her near the altar is based on eyewitnesses of the exhumation.

When I got to the bottom of the stairs, I found the door to the crypt was open and we were the first inside. Another couple came in shortly behind us. For a few minutes, it felt like we were alone and just discovering it for the first time. It was magical.

The chapel under the church

There were lots of little niche areas to explore. Finally, at the back of the space, I found a locked gate. Through the bars, I could see marble columns and floors and gilded mosaics on the walls, all perfectly preserved.
I finally knew why the nun had given me the key.

I unlocked the gate, left the key in the padlock, and stepped inside. It was stunning. As it turns out, this part of the crypt was built in 1899 to house the “the tombs of the martyrs Cecilia, Valerian, Tibertius, and Maximus and the popes Urban I (222-30) and Lucius I (253-54)” which were moved there in the 9th century.

We had about 2 minutes before the other couple came in and about 5 minutes before a large German tour group appeared and took their seats for a quick service. We left them singing hymns and headed back upstairs.

Inside the church of Santa Cecilia in Rome

Upstairs, the church itself is quite small with a beautifully carved statue of a sleeping St Cecilia right in front of the altar.

Other resources for more on Santa Cecilia in Trastevere Church 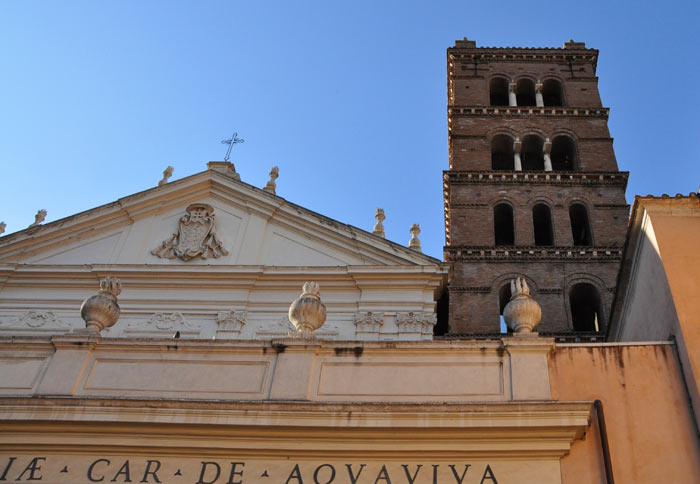 A Visit To Trajan's Market in Rome