If you’ve heard of Matera, then you’ve most likely heard of the Sassi. Matera sits on the border of Basilicata and Puglia in what would the arch of Italy’s “boot”. The word sassi translates to stones, but in this case refers to the two neighborhoods, the Sassi Caveoso and Sassi Barisano, which are comprised of caves dug into the ancient limestone cliffs in Matera. These caves have been shelter to humans since the Paleolithic age.

This region has long been one of Italy’s poorest and up until the 1950’s people lived in the caves, which had no running water or electricity, along with their children and livestock. Embarrassed by the deplorable conditions in which the sassi’s inhabitants lived, the Italian government enforced the relocation of 30,000 people to the newer part of town in the early 1950’s. In the late 1980’s they reopened the area for development (in hopes of encouraging tourism to the region) and people began to move back in, building restaurants, bed and breakfasts, and renovating homes. 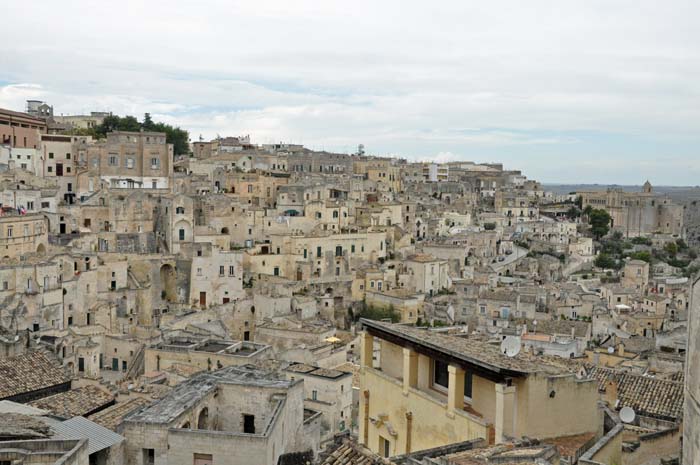 In looking at the town from a distance, it’s hard to imagine the buildings you see are all mostly caves inside because on the outside they are faced with stone and have windows and doors. But inside there are rooms carved deep into the limestone cliffs.

On our first day in Matera we took a walking tour with lifetime resident Nadia Garlatti. Nadia met us in the new town’s Piazza Vittorio Veneto and from there we walked down into the first of the two sassi neighborhoods. But first, we got a private tour of the cistern which gave the town it’s first UNESCO World Heritage status. This is the second largest man made cistern next to the one in Istanbul. The Matera cistern was closed at the time we visited, but because Nadia is a licensed guide with a key to door, in we went with the door locked behind us, the only people inside the vast damp space. The cistern was carved by hand in the 1700’s to capture water for the town and still does so today. It’s a marvel of ingenuity and engineering. 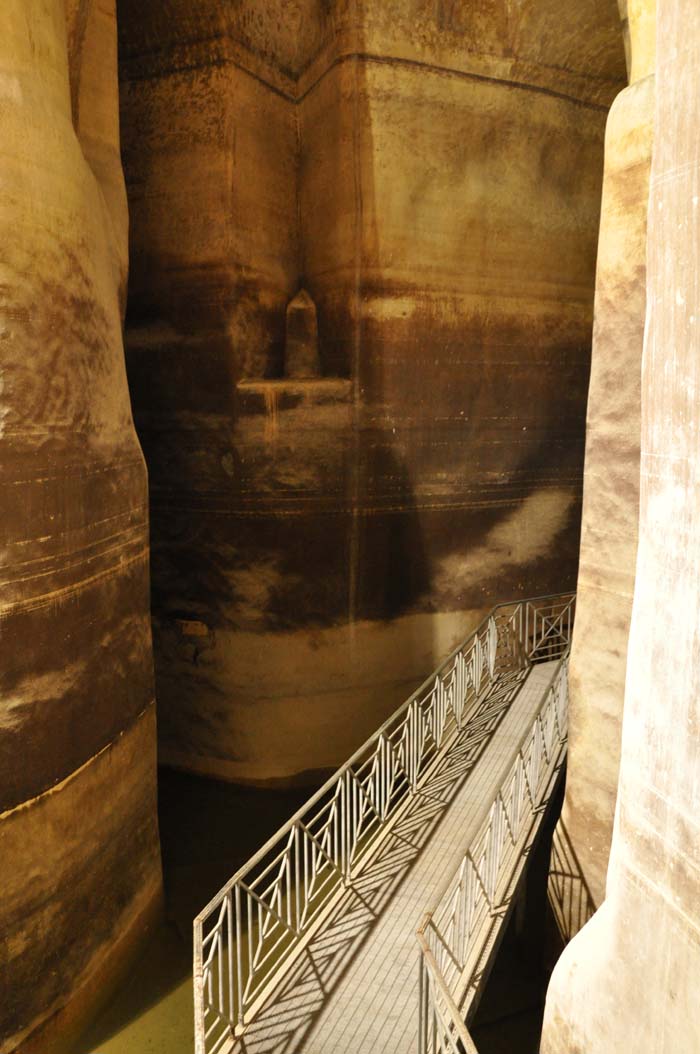 In the area above the cistern and before you walk down into the Sassi, there are the remains of an ancient church, complete with frescos. 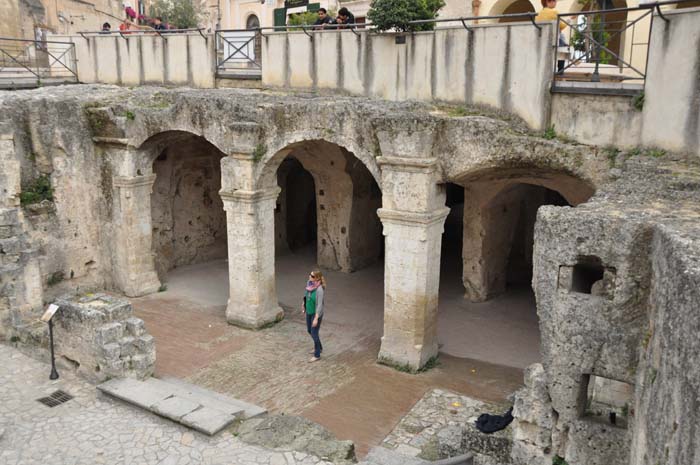 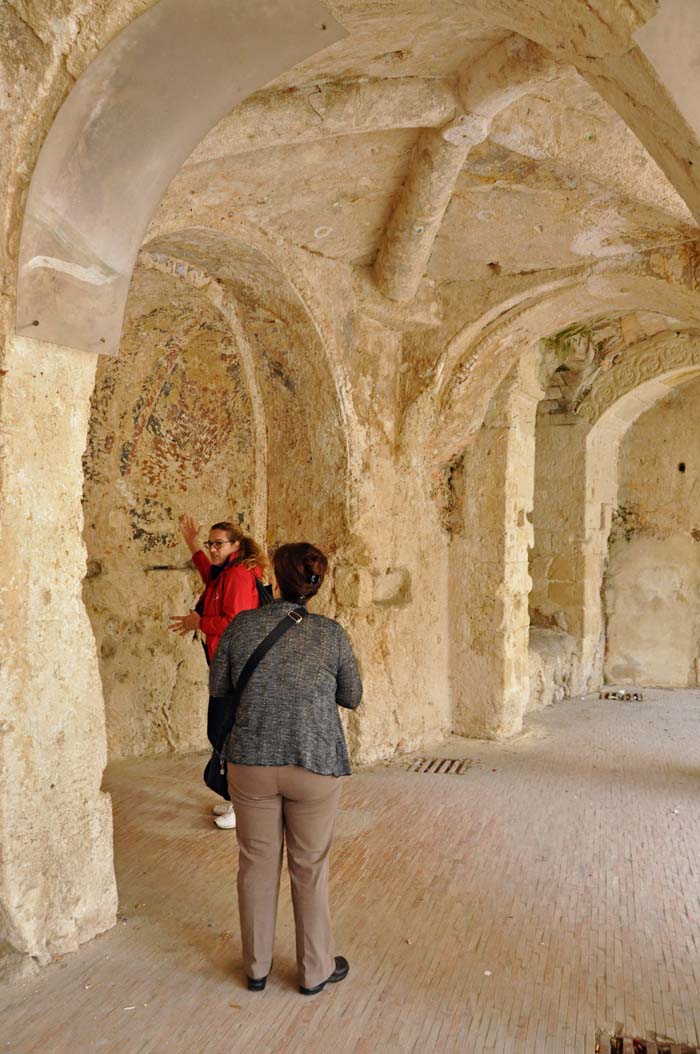 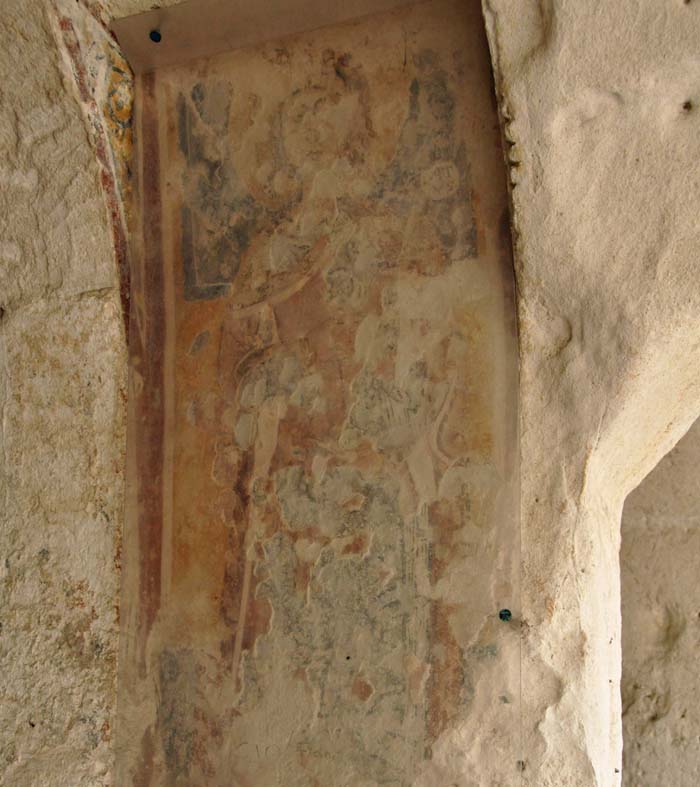 Before we walked down, Nadia explained how she grew up in Matera’s new town and was not allowed to go down into the Sassi because it was considered dangerous. When she was around eight years old, she explored the neighborhoods with her older brother and was shocked by the extreme poverty she witnessed.

Nadia shared stories about the difficulty residents faced when they moved into more modern living spaces. Many did not understand what to do with flushing toilets or bathtubs and used them for planting and growing vegetables, clogging the pipes. Some were unhappy with homes with solid doors because they were used to allowing their neighbors into their homes at any time and felt that to have a solid door was to be unsocial. Others would return to their abandoned homes during daylight hours to visit, sitting outside them in the empty streets. 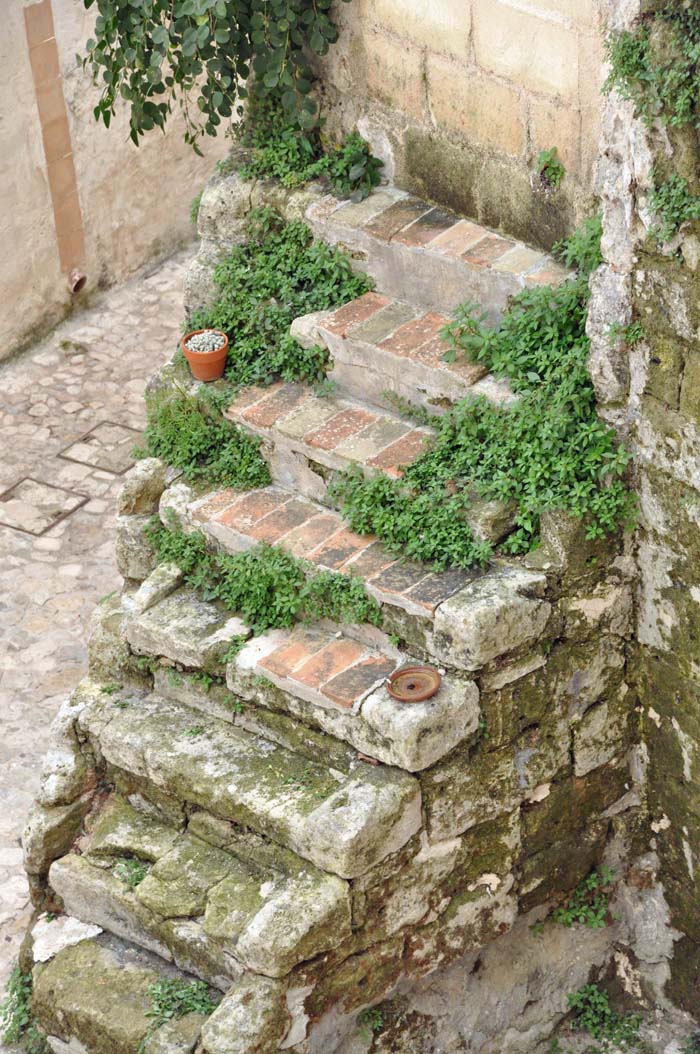 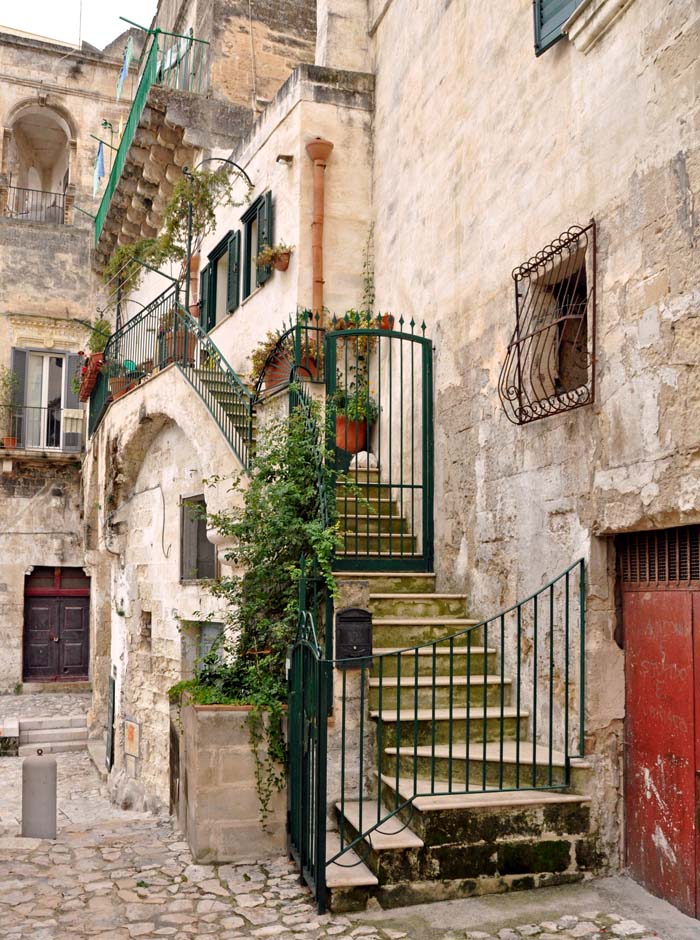 The unassuming entrance below concealed a church carved into a cave that was hundreds of years old. 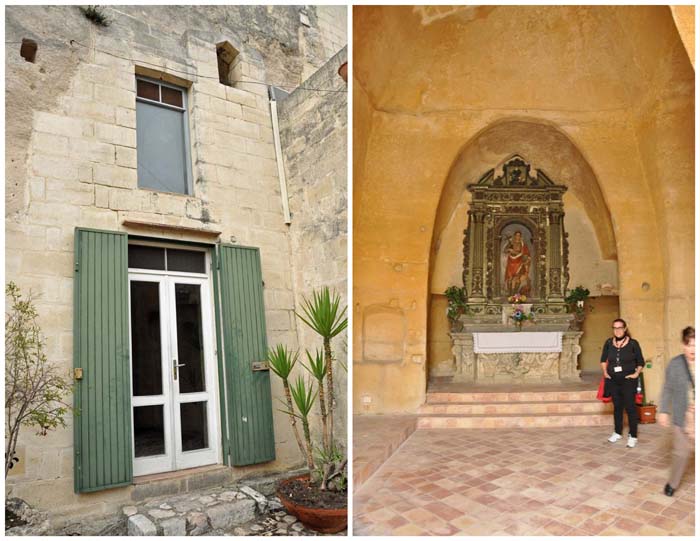 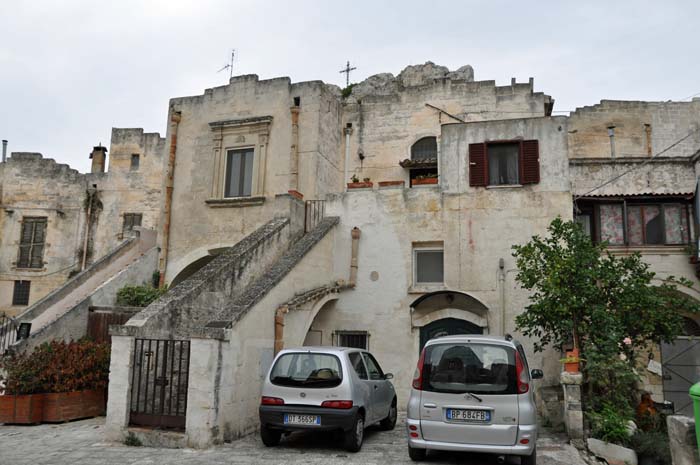 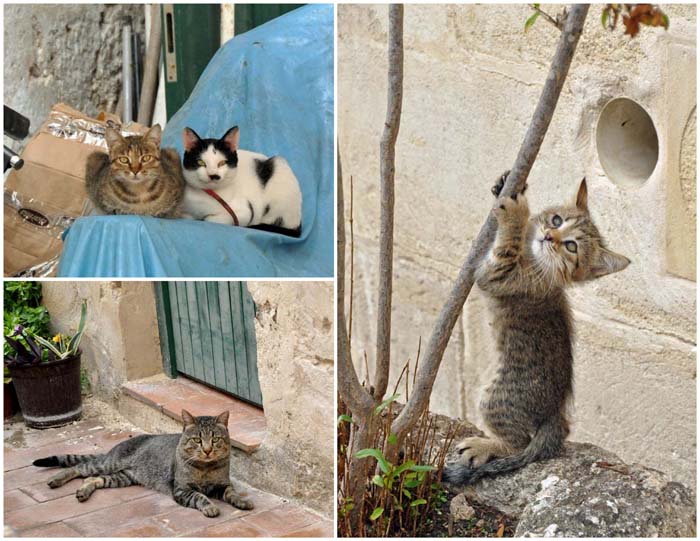 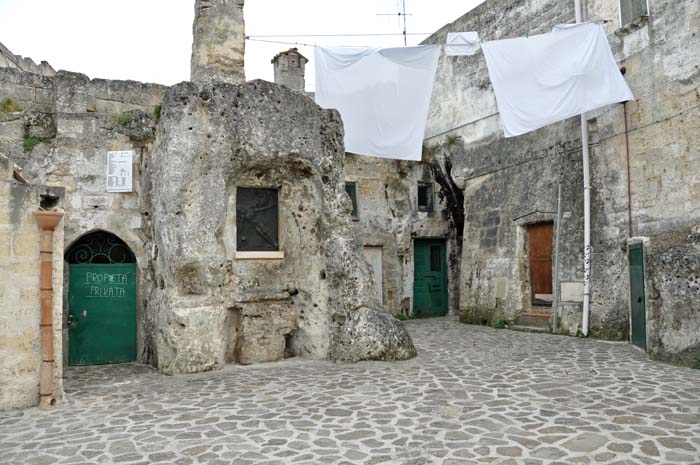 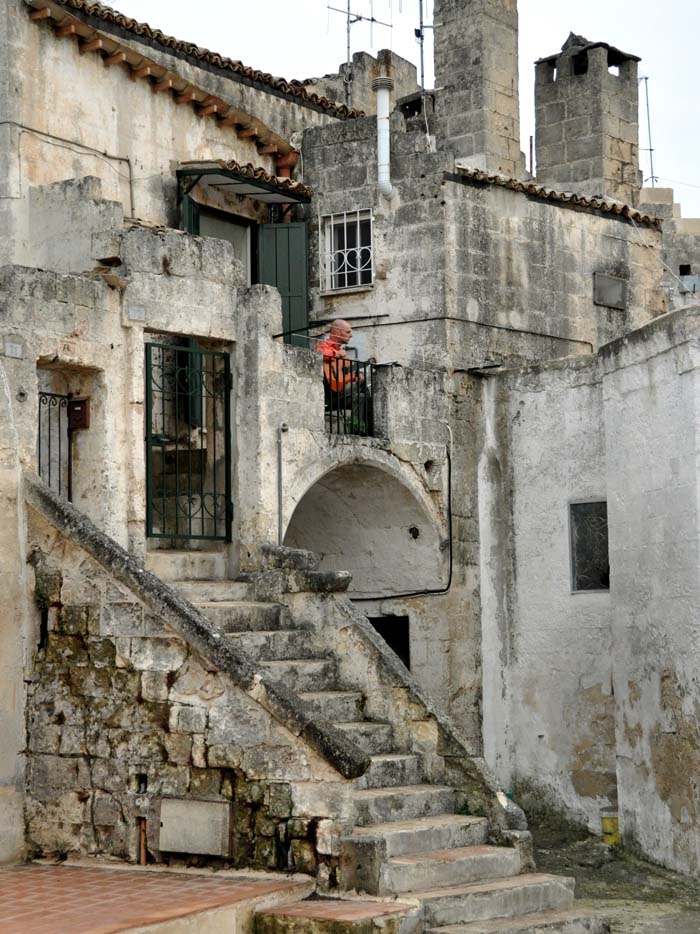 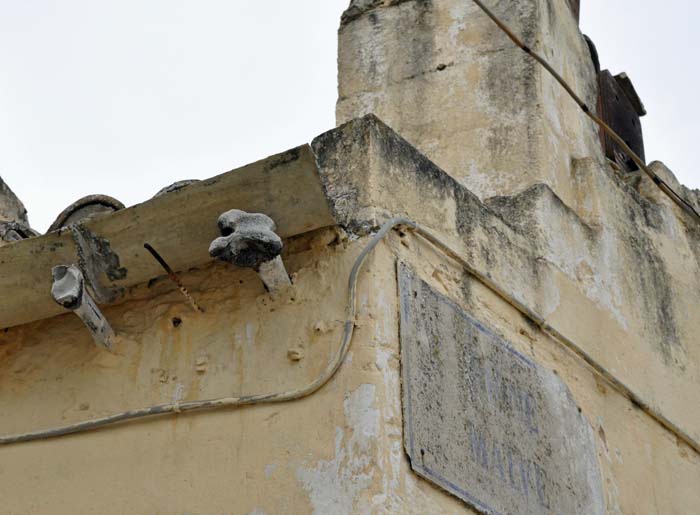 Above, sometimes the bones from animals were used to help support structures.

We paid a visit to one of the main Sassi churches complete with frescos from the 14th century. The Cheisa San Pietro Caveoso has one of the oddest frescos I’ve ever seen. I’d call this “Mother Mary of the Hand Bag” if it wasn’t so sacrilegious. Nadia said no one seems to know the significance of the painting and it really hasn’t been studied. 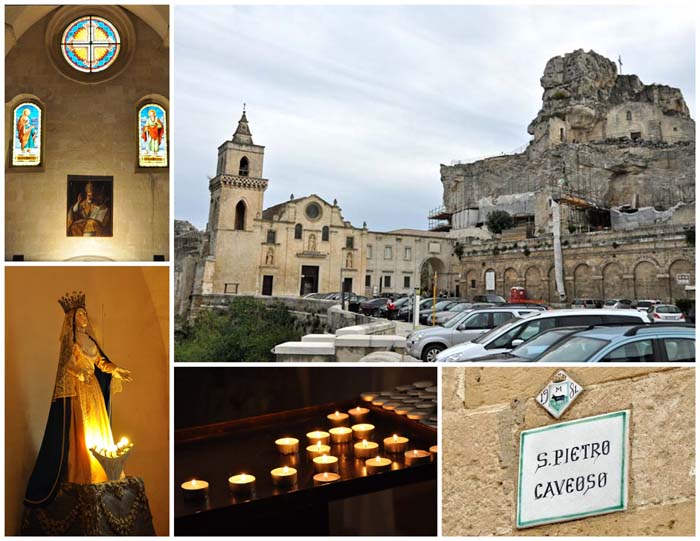 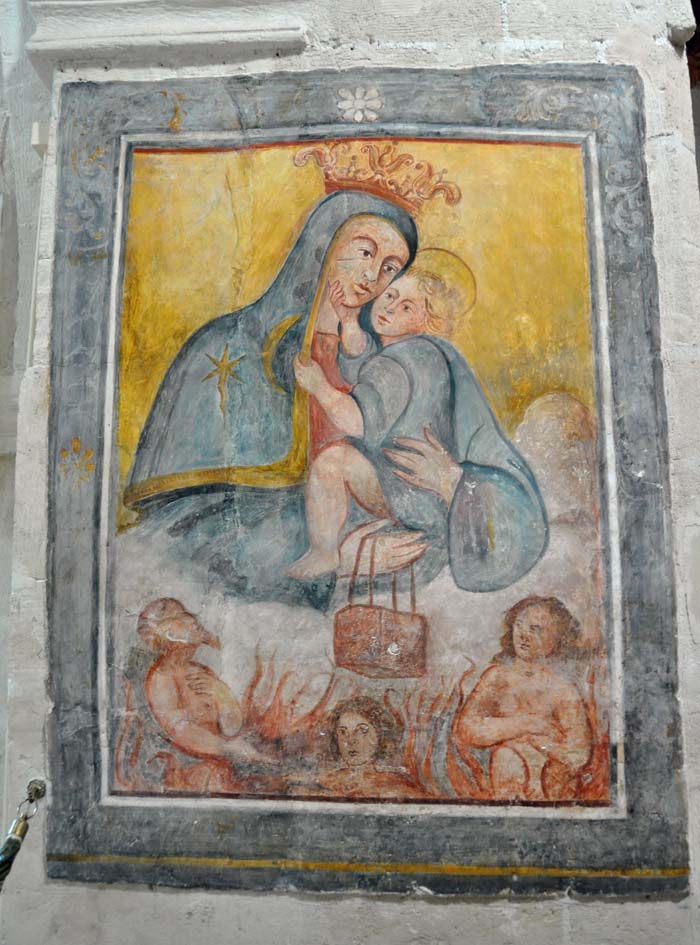 Near the end of our tour, we were given the opportunity to visit a recreation of a typical Sassi dwelling (separate entrance fee). It was illuminating. While it might have been comfortable for two people, most likely it held a very large extended family and all their animals. 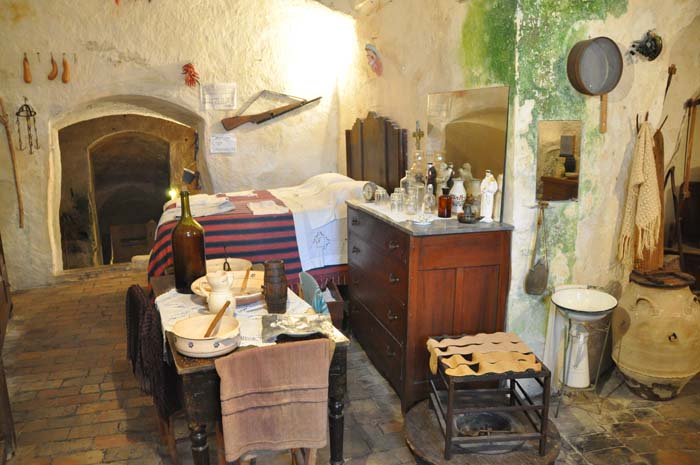 The kitchen below and the main living space above. The bed from was made from iron and was very high off the floor so that the chickens could live underneath. The archways on the left led down to cooler spaces which were used for livestock and wine and food storage. 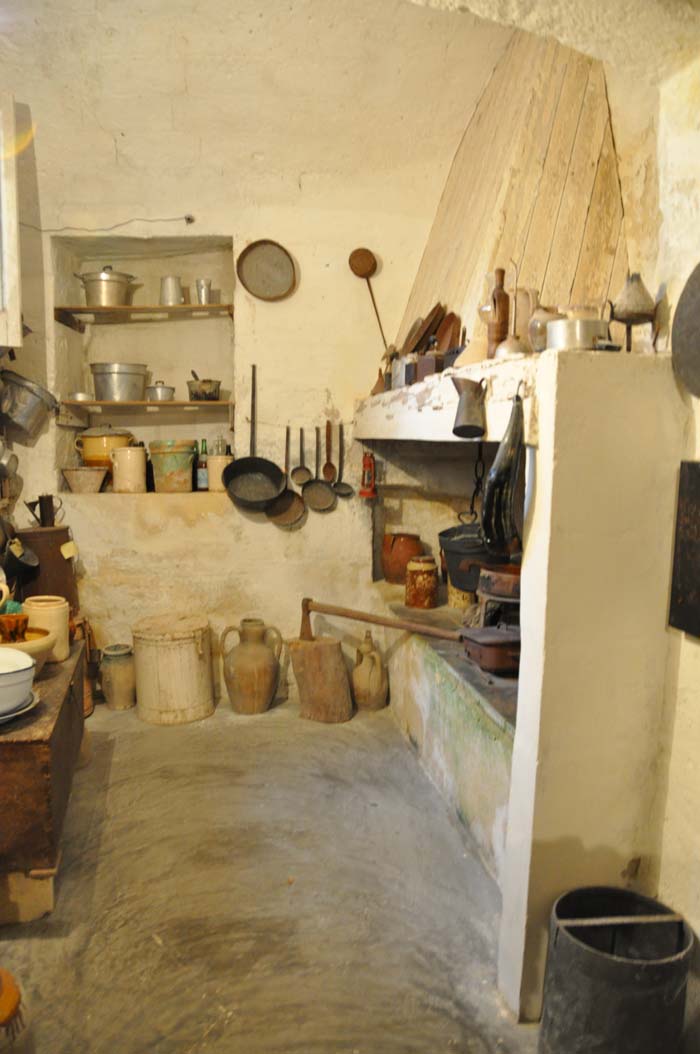 Below, where wine was made in the cave next to the house dwelling. 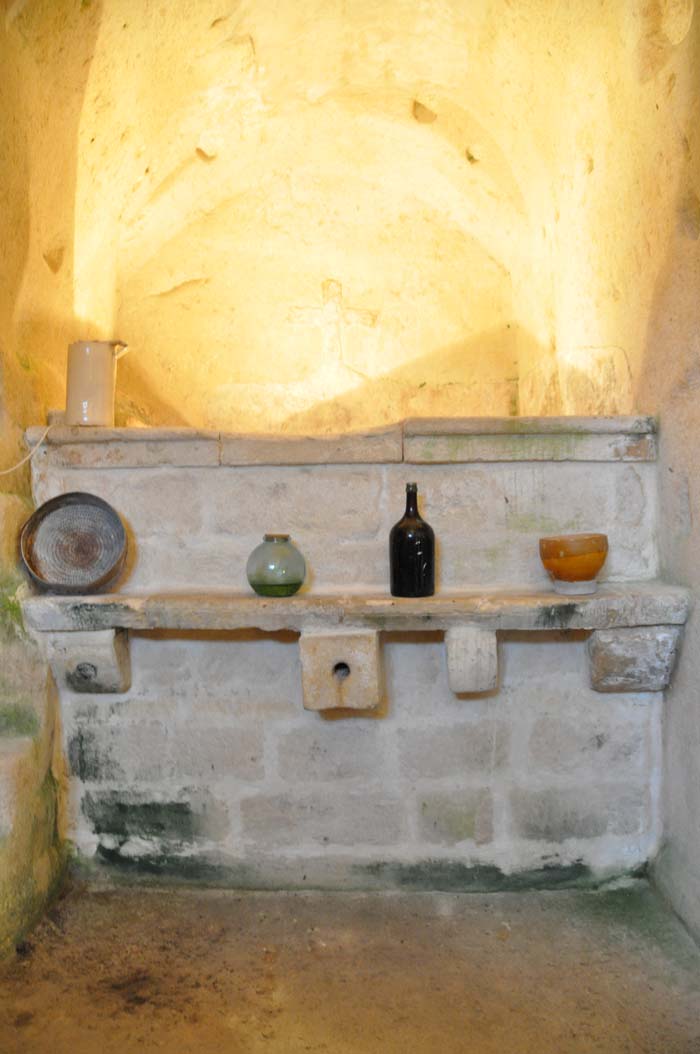 We thoroughly enjoyed our walking tour with Nadia. I’d highly recommend it if you’re interested in an insider’s view of the Sassi. Nadia can be reached at nadiagarlatti@tiscali.it

Disclaimer: As always, I received no compensation for this post and we paid for our tour ourselves.