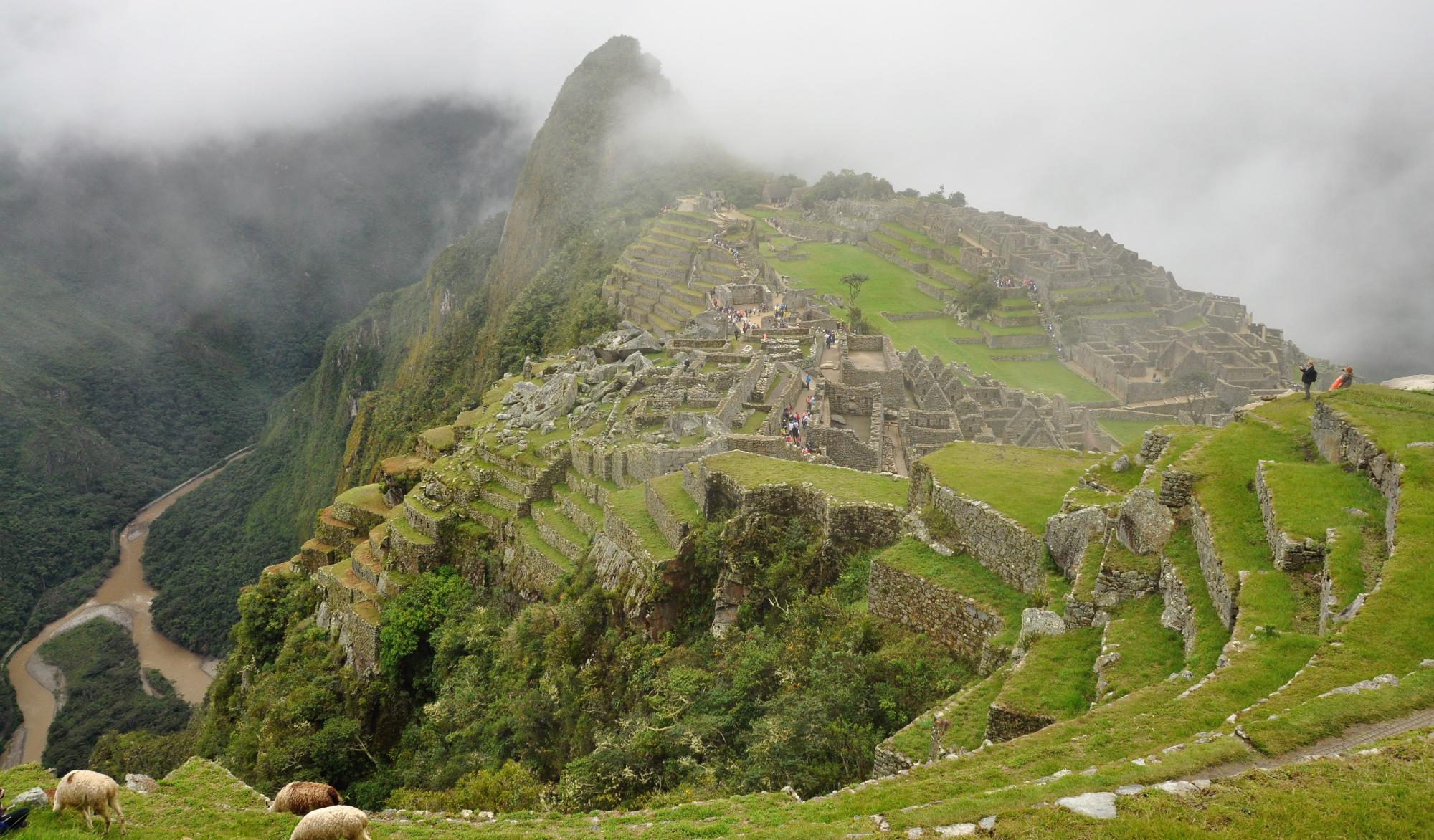 We’ve wanted to visit Peru for over a decade but while it’s always been in the top five of places-we-want-to-go, it never made the cut until now. Perhaps we thought we needed to have two full weeks so we could include the Amazon and Lake Titicaca as well as Machu Picchu. In the end, we decided we were willing to go for only nine days and stick to the Sacred Valley, Cusco, and Lima for this trip and we’re certainly happy we did.

This visit to Peru was our first time in South America and qualifies as our 6th continent, but who’s counting? 😉

Planning a Trip to Peru

One of the things which helped us decide to go on the trip was the availability of a non-stop flight from LAX to Lima on LAN Airlines. This cuts the travel time from a minimum of 12 hours with a layover somewhere like El Salvador (been there, done that) to 8.5 hours. The fact that it was a red-eye meant that we could leave after work on a Friday night and be in the Sacred Valley by Saturday afternoon after a change of planes in Lima to Cusco. Oh, the best laid plans…

While researching airfare, I learned that LAN usually does a Cyber Monday (the Monday after Thanksgiving) sale so I waited. Indeed they had a sale and this saved us 10% on our four flights which were LAX to Cusco (connecting in Lima), Cucso back to Lima, and then Lima to LAX all on LAN Peru for about $1100 per person all in. Things were made more expensive because we were traveling during Easter week. Tickets just to Lima can often be found for a few hundred less (outside of holiday periods), but tickets to Cusco rarely seem to go on sale.

On the day of our first flight I was able to check in on line and print our boarding passes all the way to Cusco. Because of this, we decided to attempt to go carry on only, even though LAN is notorious for weighing and measuring luggage. We were traveling light with only a basic roll-aboard and small backpack each. We later met people in line who had to check bags of the same size because they’d checked in at the airport.

We arrived at LAX and entered the beautifully redone Bradley International terminal. Soon we were in the shiny new terminal which reminds me a lot of both Taipei and Bangkok with fancy stores and decent new restaurant options. Even the new gates are nice with comfortable seating and lots of outlets for charging devices. Unfortunately, we weren’t able to enjoy any of the new terminal because our gate was relegated to one of the old sections, very far away, with no food or anything around.

Around 11:30 PM they announced that our 12:15 am flight would not depart until 1:10. And there we sat, in the freezing cold terminal with nothing to do but wait and eavesdrop on other passengers having loud conversations on their cell phones. In the end, the flight did not take off until almost 2 am.

On the plane, the seats were so tight that if the person in front of you reclines it is almost impossible to reach what ever you have under the seat in front of you. They served dinner at 2:30 am (oh, why did I eat the too salty chicken and rice?) and breakfast was inedible. No hard alcohol was served on the plane. I was too tired to watch, but the movie selection looked really good, with most of the 2013 Oscar nominated movies there.

Of course, because we left late, our flight arrived late, creating a snowball effect. By the time we got to the gate in the domestic terminal for our connecting flight, the plane was pulling away. Neither one of us can remember the last time we actually missed a flight in the last 25 years of traveling together. We were re-booked on a flight leaving 2 hours later, scoring some of the last seats available. In the end, we did not get to the hotel in Urubamba until around 6 PM. Remember those best laid plans…? 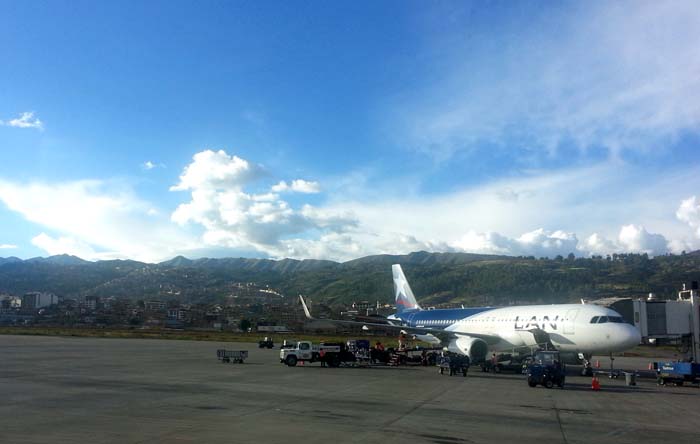 The Cusco airport, literally right in the middle of town.

When trying to check in online for our return flight from Cusco to Lima we discovered that David’s reservation was there but mine had disappeared from our record locator even though the tickets were purchased together. It took the concierge making a call to LAN to get my new reservation number and then I had to select seats all over again to check in. Apparently this is not uncommon so make sure you check in as early as possible.

The internal flights between Lima and Cusco were uneventful. The flight back to the US was on time and easy and I think I watched four movies. We were the first people though immigration because of Global Entry and we had our luggage off the baggage carousel before anyone from our flight even arrived. From plane to curb in less than 30 minutes!

With the flights out of the way it was time to plan hotels. We have SPG (Starwood) points and Gold status, so if we can ever take advantage of that, we do. Fortunately, Peru has several SPG hotels. We selected the Tambo del Inka in Urubamba for four nights and the  Four Points in Miraflores Lima for two nights both utilizing SPG cash plus points. In Cusco, we chose the Andenes al Cielo for two nights because the SPG hotel there did not have rooms available for cash plus points. Ultimately, we spent only one night at the Andenes al Cielo in Cusco and then moved to the Palacio del Inka (SPG) for the second night. Reviews of all hotels to come later.

Though many people choose to, we decided we did not need to stay in the town of Aguas Calientes (now renamed to Machu Picchu Pueblo) at the base of Machu Picchu for a night before or after visiting the ruins. One of the reasons we selected the Tambo Del Inka in Urubamba is because it has a train station on the property and one train per day leaves and comes back from Machu Picchu.

Tour guide– we contacted and hired Percy Salas (smunditur@hotmail.com) based on reviews of him I’d read online. We reserved three days of touring plus one airport transfer which turned out to two days with him, one with another guide (his coworker, a lovely woman), and one with just a driver who took us to Urubamba. We did not have a tour guide for the ruins of Machu Picchu. Percy was always on time, pleasant and well informed. We would recommend him.

Machu Picchu- Planning this day deserves its own post complete with tips on how to book it all yourself (we did) and a checklist so you don’t forget anything on the big day. See this post for all the details.

Airport Transfers-
We used Percy (above) for the 1.5 hour drive to Urubamba from Cusco ($50) and then for a half day tour which took us and our luggage to Cusco from Urubamaba, stopping to see the sights along the way.
To get to the Cusco Airport from the hotel, we used a standard taxi outside the hotel.
For Lima airport transfers, I booked online with www.taxidatum.com for $20 each way, paid in US dollars. I think this service is similar to Uber in that it uses private cars and different drivers each time. The cost was half of what was quoted by the hotel. Taxis can be booked at the airport for about the same cost but I was concerned about the negative things I’d read about rogue drivers. Also, it’s always nice to have someone waiting for you when you arrive.

Fodor’s message board for South America. The trip reports and questions/answers are extremely helpful in the planning process.

Trip Advisor message board for Peru. Also helpful and very active. This is where I learned about Taxidatum.com

Chowhound for Latin America– You have to search for Peru recommendations, but they are there. 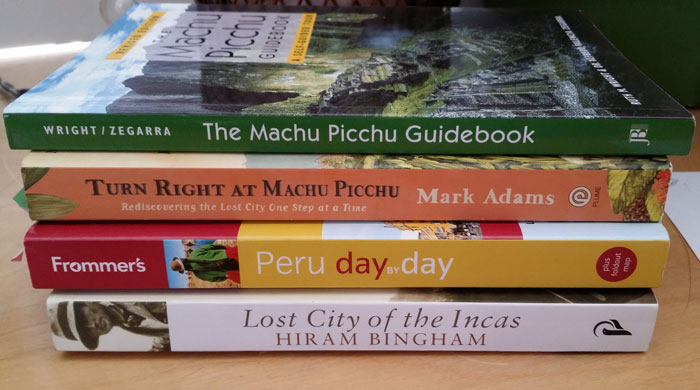 – this is the perfect book for people who are really into ruins. Tons of information, probably more than you’d ever need.

– Fun book, I didn’t finish it before the trip unfortunately.

Lost City of the Incas-By Hiram Bingham- David read this and enjoyed it.

*Links to books at Amazon are affiliate links.

Restaurants in Matera and Bernalda