Percy picked us up at 9am in his car, with just him driving his personal car. David sat in front which meant a lot of the discussion was in Spanish, but when it got too detailed for me to follow he switched to English no problem.

Our first stop was the town of Ollantaytambo, in the direction of Machu Picchu. In fact, the train from Urubamba stops there to pick up most of its passengers before heading up to Machu Picchu. Many people choose to stay there instead of Machu Picchu Pueblo because it’s more central for seeing the rest of the Sacred Valley, like Urubamba. From what we saw, it’s a cute little town, definitely geared more toward tourists than Urubamba, meaning more hotels, restaurants and souvenir shops. 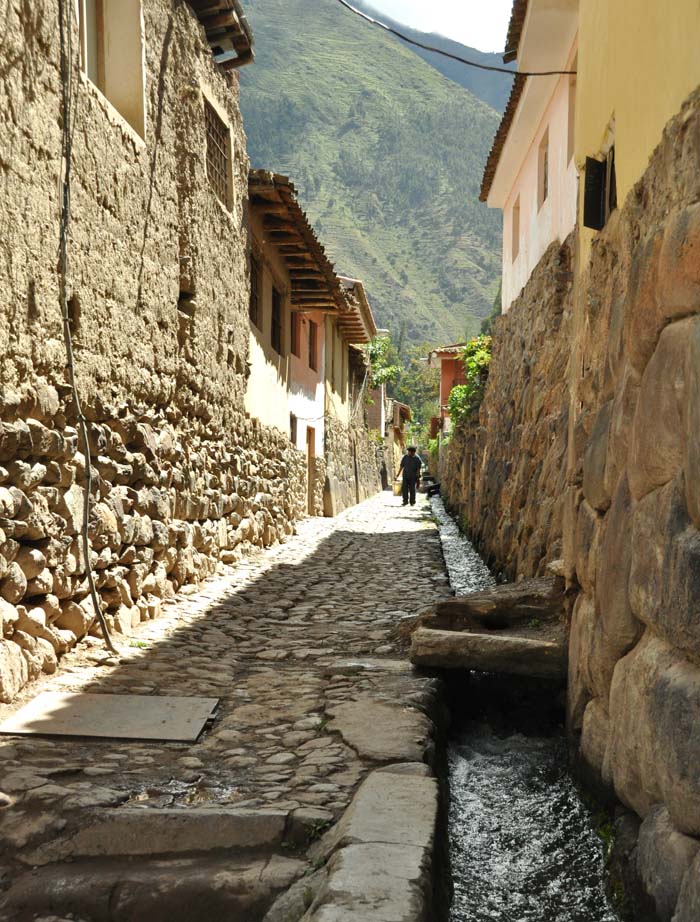 Percy drove through town and parked in a dirt car park which while big enough for several dozen tour buses, was thankfully empty. We walked a few blocks through the town which was very traditional at its center; cobblestone streets, colorful buildings, and water from mountain snow runoff flowing down open irrigation channels along one side of the street. 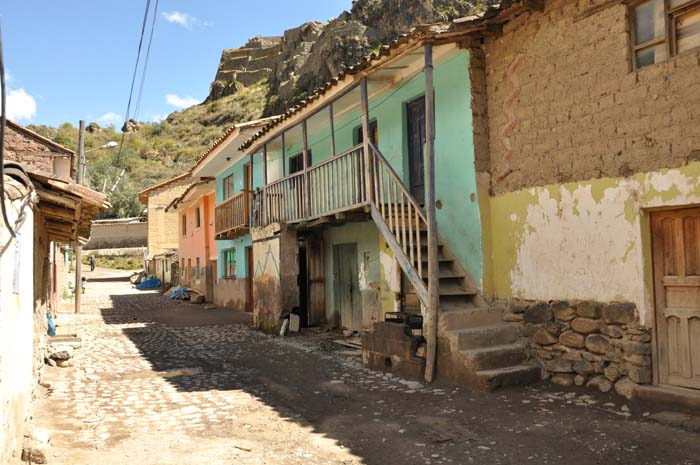 At the base of the Ollantaytambo ruins there are three or four rows of souvenir stands. On Monday we’d purchased the Bolleto Turistco and our tickets were checked at the entrance to the ruins. Then it was a long, long way up to the top. Make sure you bring water. And snacks. It’s tiring. In the photo below you can barely see the people and yes, we climbed all the way to the top. It’s worth it. The views are spectacular. 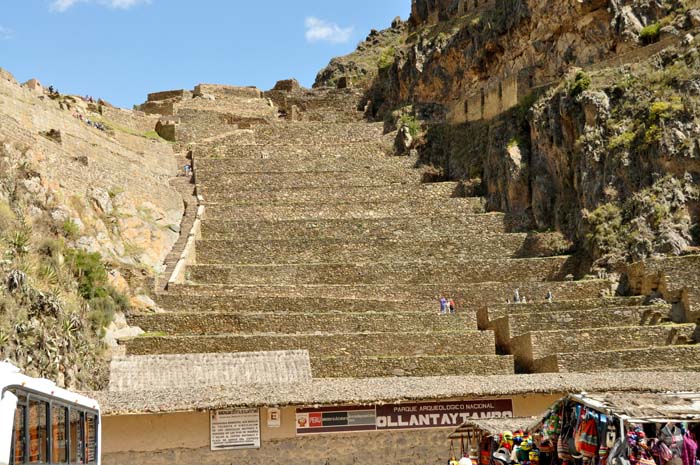 At the top of about 200 steps is the unfinished Temple of the Sun and the Temple of Ten Niches. Here it’s possible to see how the stones were moved. There are little rock nubs on the large stone faces used to help move the stones into place. Had the temple been finished, it’s thought those would have been chiseled off. You can also see how the stones are carved to fit together like a jigsaw puzzle, which makes them stronger and less prone to movement than if they’d just been straight stacked one atop the other. 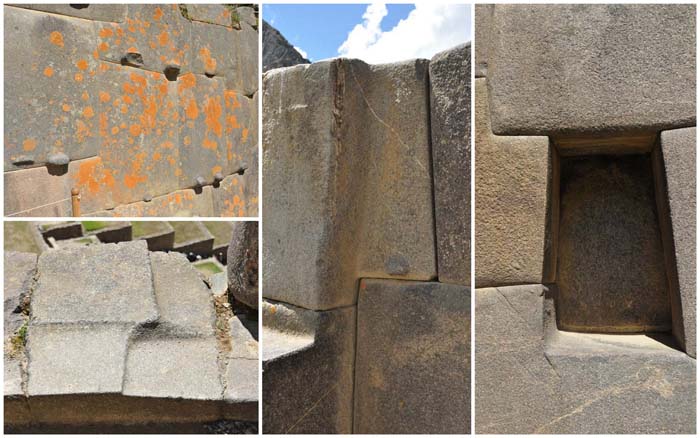 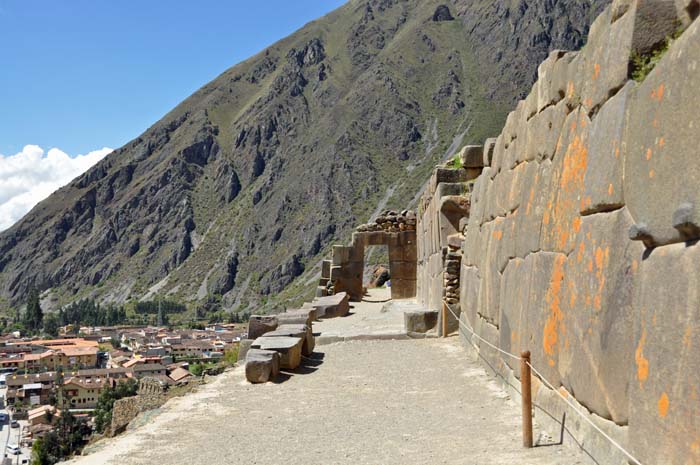 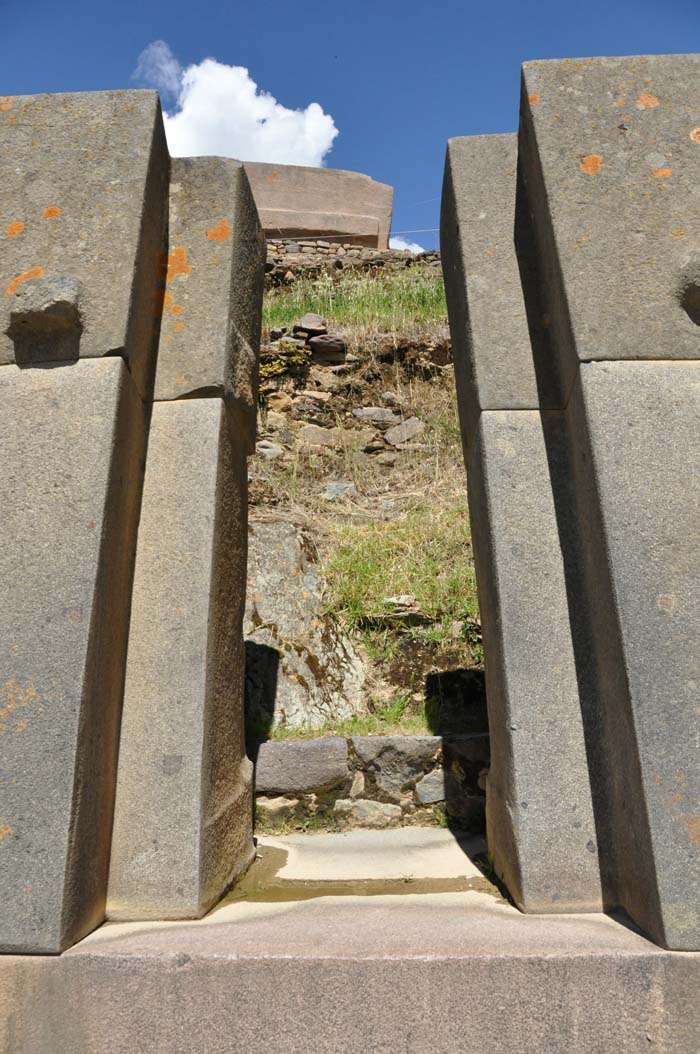 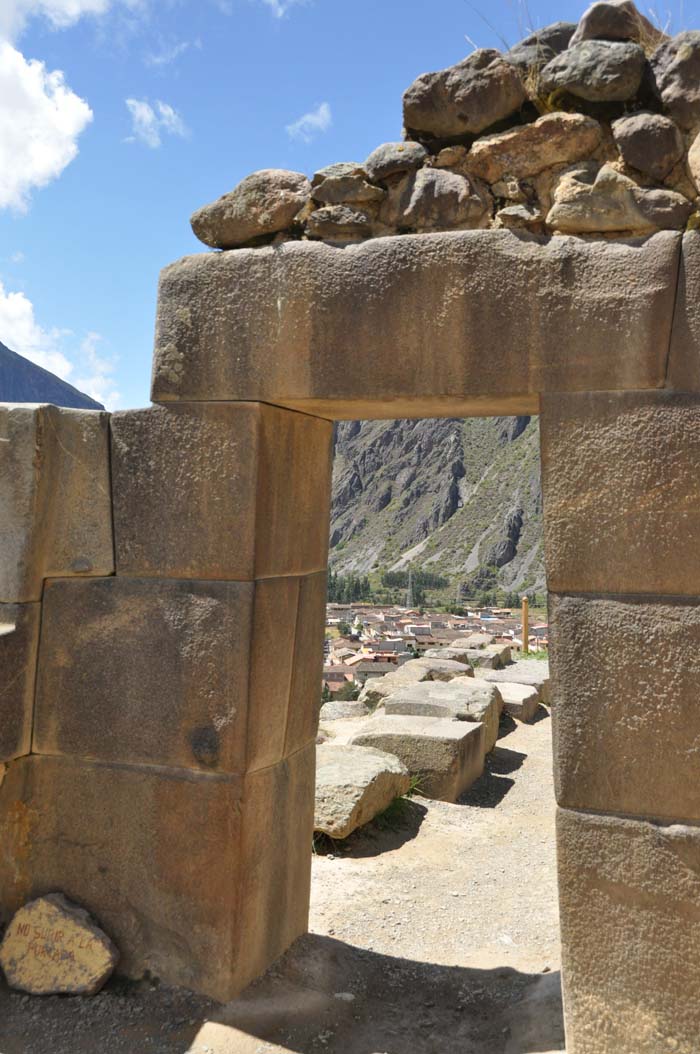 The view below is across the valley toward the river, road and train tracks at the base of the hills. 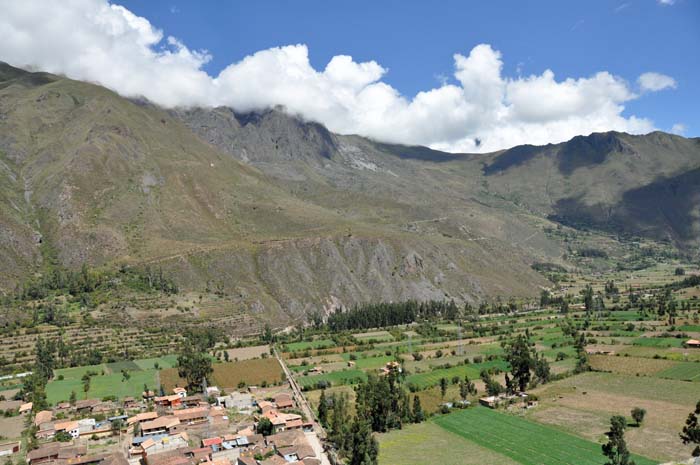 It’s thought that the giant stones for the temple of the sun (below) came from the top of the mountain across the valley (above). 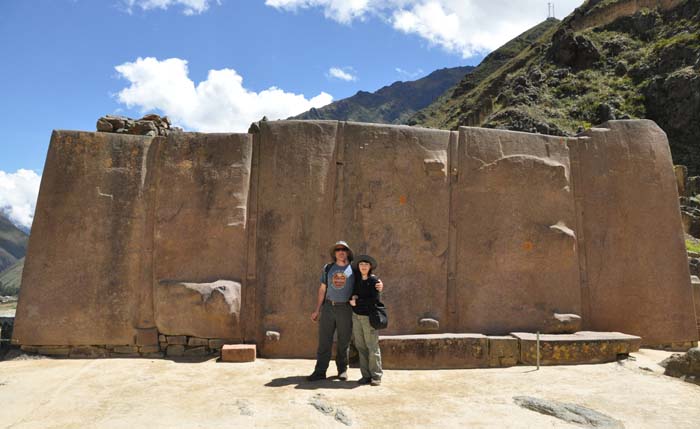 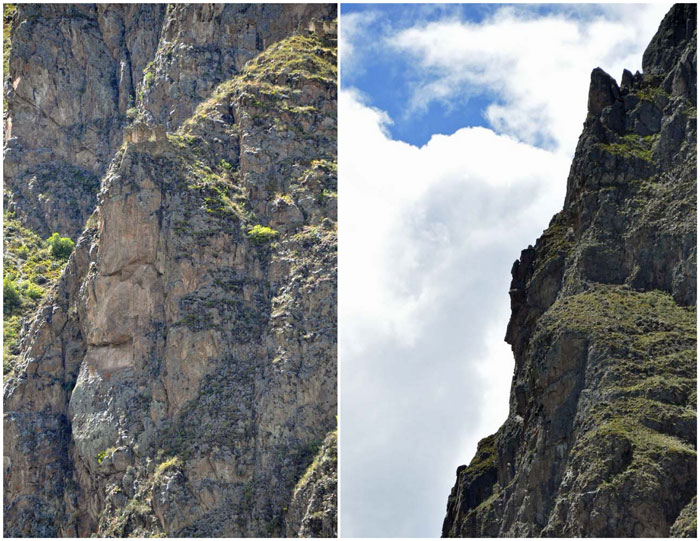 The face of the “man of the mountain”, above. 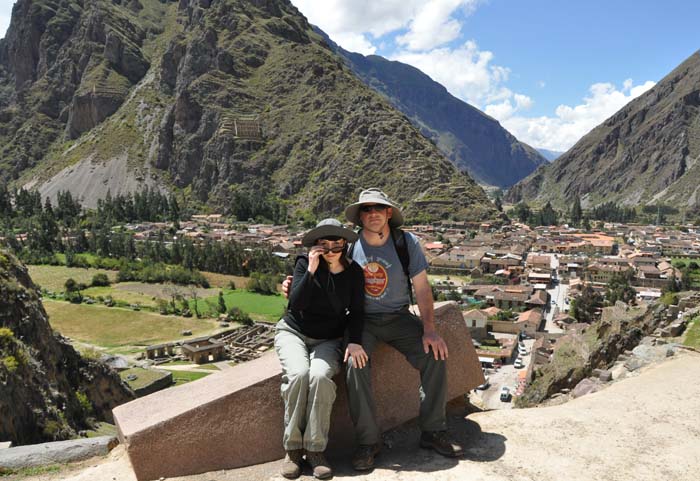 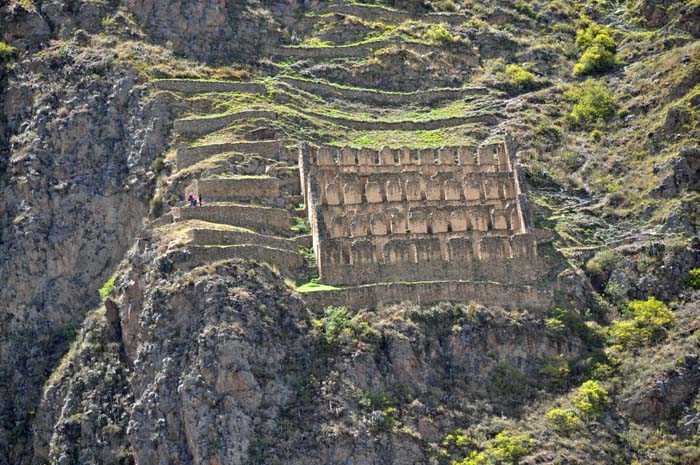 Across from the temples. It’s possible to hike up there but we didn’t have time. Thought to be for grain storage. 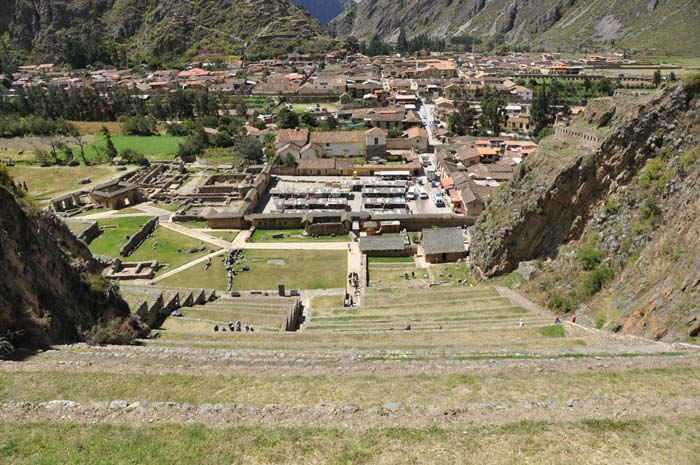 Looking down into the town of Ollantaytambo, above. 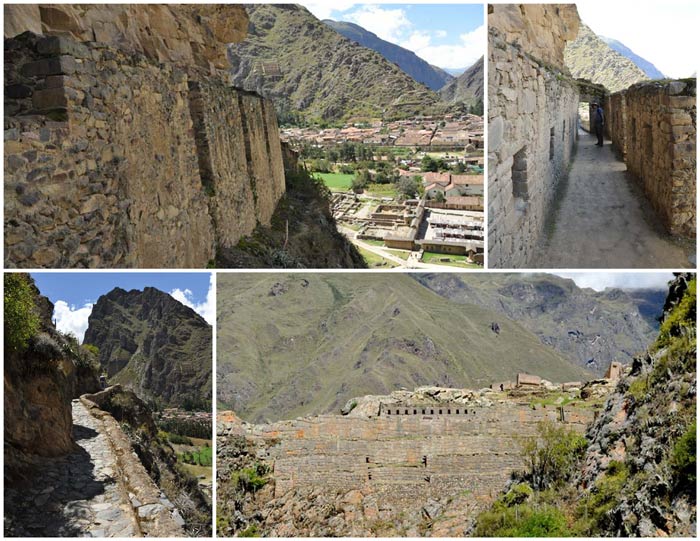 Above, a walk along the un-guardrailed top of the ruins. Photo bottom right is the Temple of the Sun as seen from a distance. 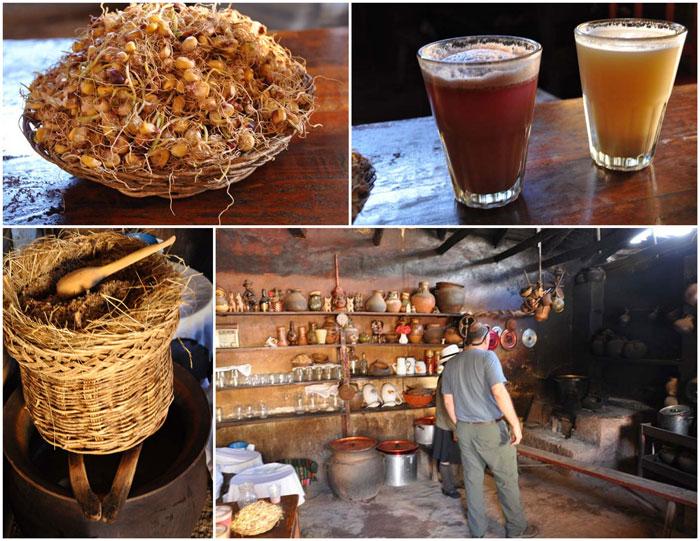 After Ollantaytambo, we stopped at a place set up so that tourists could see how chicha (fermented corn beer) is made (above). Top left; sprouting corn kernels. Top right; chicha. The beer on the left is flavored with strawberries. Let’s just say the flavor was “interesting”. Bottom right; room where the chicha is brewed. Bottom left; how the mash is poured though a hand woven basket.

We also stopped for lunch at a restaurant called Dona Clorinda. It was acceptable, but mostly set up for large tours. We did get to try Inca Kola here, a soda only made in Peru and which outsells Coke and Pepsi. It tastes like bubblegum and frankly, I’m surprised it’s not pink. I had the avocado “salad” and the soup which was made with quinoa. David had a heart-stopper plate of steak, eggs, fries, avocado and plantain. 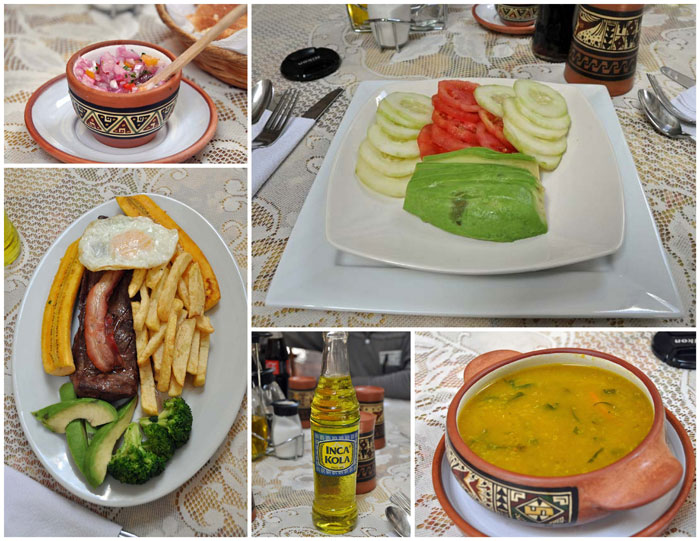 After lunch we drove back toward Urubamba, passed it, and went about an hour towards Cusco to the ruins of Pisac. Knowing what I know now, I would have arranged for us to visit here on our way to Cusco the next day because this turned out to be a long tiring day with half of it spent in the car.

It took about 15 minutes to drive from the base of the valley floor up to the entrance of Pisac. Looking down into the valley at the homes and villages dotting the mountainsides,  it reminded me very much of Switzerland, sans the window boxes filled with geraniums. 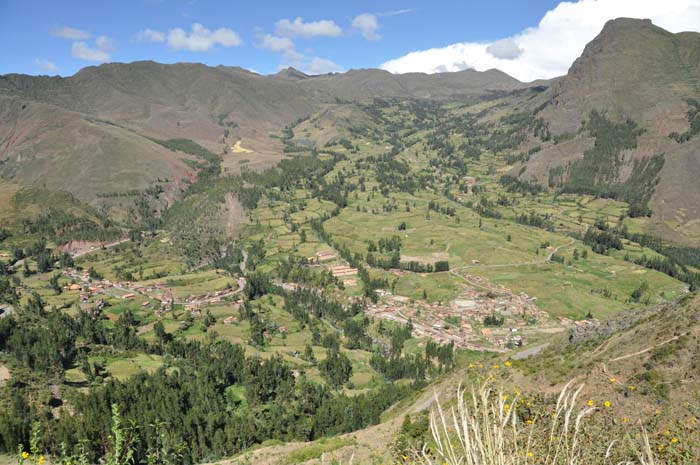 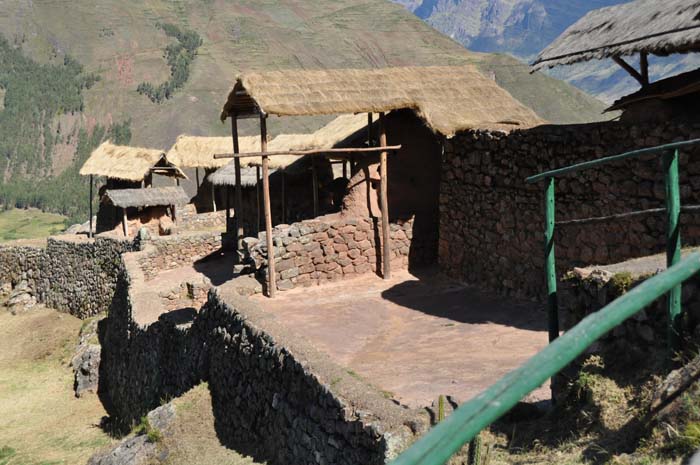 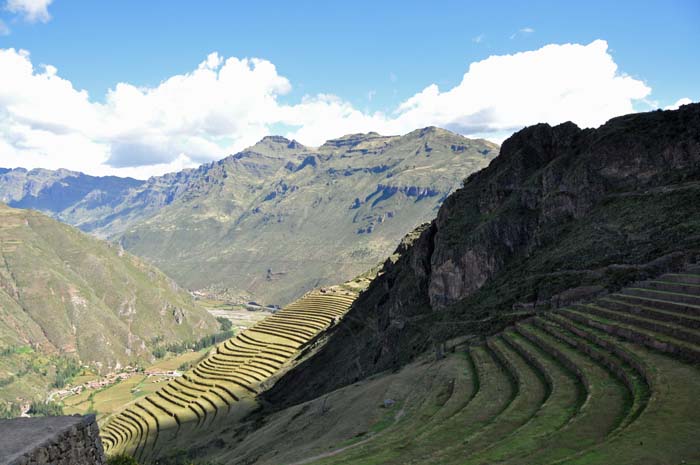 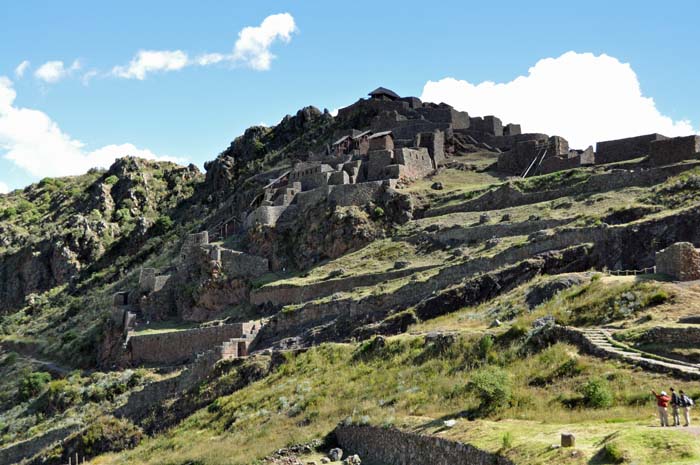 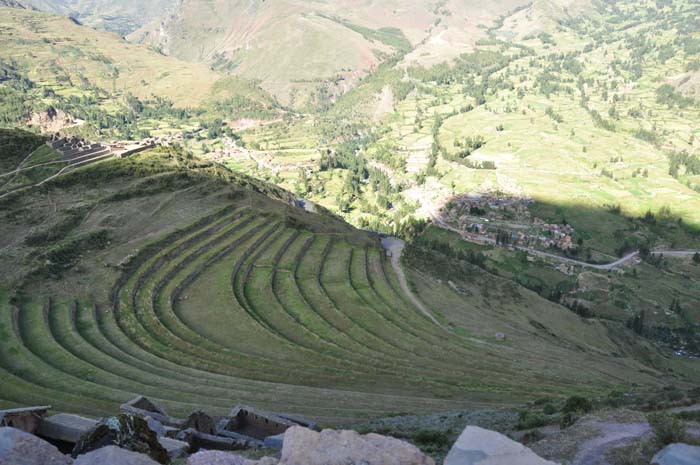 Look closely at the photo below. See all the bright blue spots? Those are all government installed outhouses (2nd photo below), complete with running water. When asked why they were all painted blue, Percy said it was so everyone would know who was responsible for putting them in. 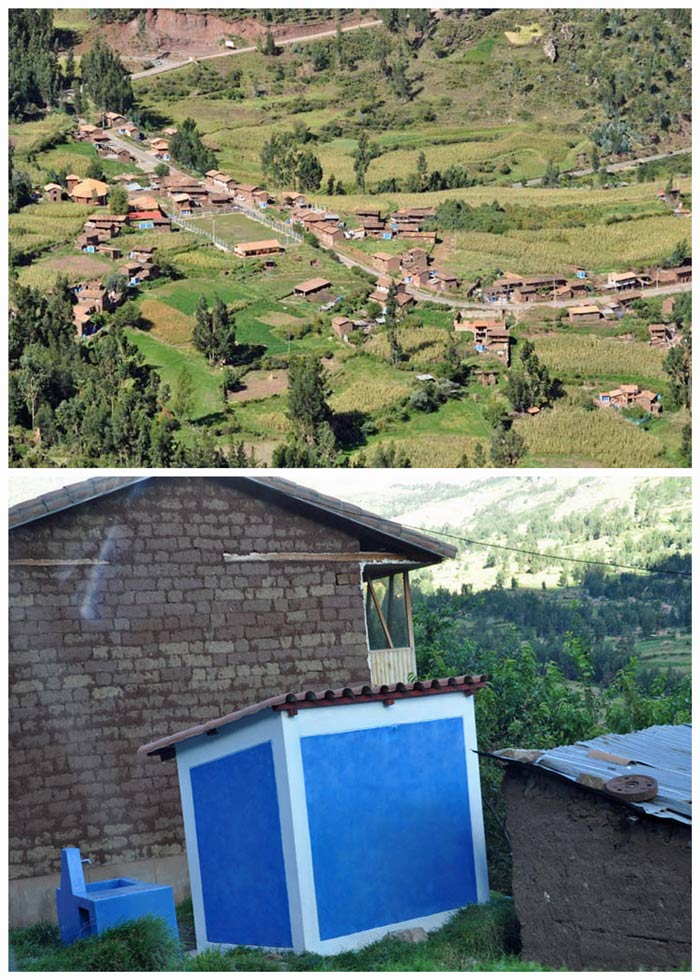 Our final stop was at the Pisac market. I had to buy a few of those little salt bowls with spoons. I also bought some beautiful alpaca scarves and a wrap, but in general the market has the same stuff we saw everywhere else. 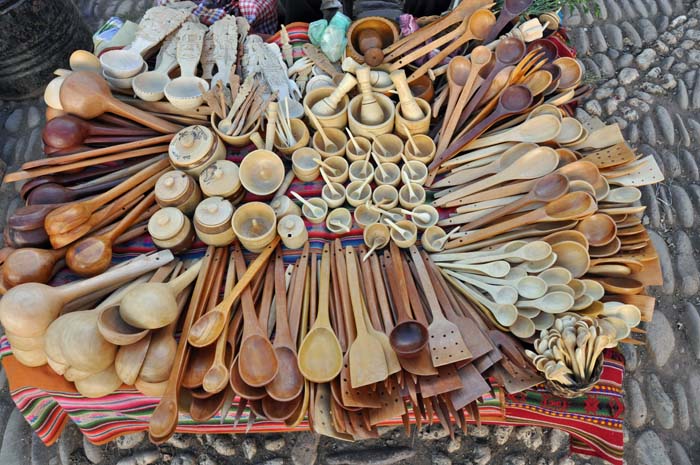 Then of course, there was this lovely little lady. She was quite the character! 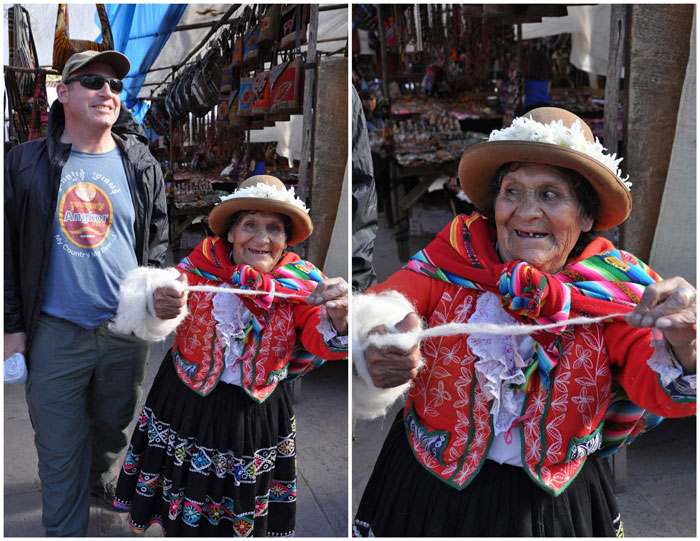 From the drive back to Urubamba, below (photos by David). 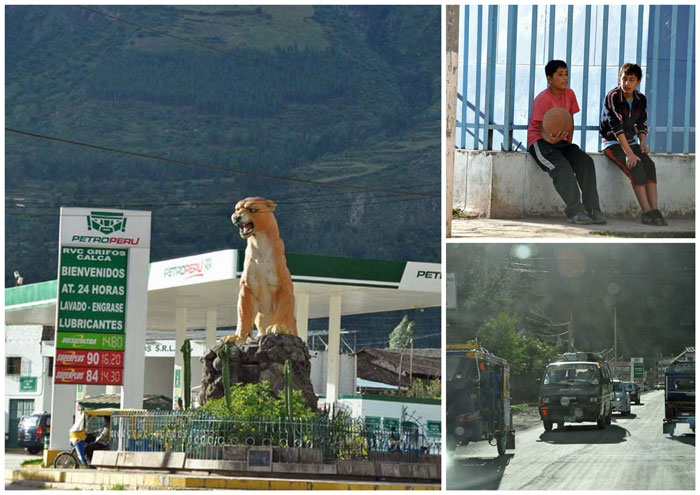 The Road from the Sacred Valley to Cusco; Llamas And Stones