Random Article
Search
July 13, 2010
Isla Contadora
Today we woke to cloudy skies and the hopes of doing a snorkel/whale watching trip with Coral Dreams. Breakfast was nice, down on the Inn’s patio, cooked to order by Elizabeth each morning with choice of omelettes or eggs, toast, fruit and coffee. The open air kitchen also has a refrigerator filled with water, beer and soda which are available to guests for sale on the honor system.

After breakfast we found out from Scott that there was an issue with Coral Dream’s boat and they would not be running their daily 10 am snorkel trip. We got in the truck in search of another option and ended up at Villa Romantica which owns a glass bottomed boat. There was some confusion as to whether or not the boat was available (it had been privately chartered) but the end we wound up with Coral Dreams whose boat was not broken, just stuck on the sand until the tide came back in. We were happy with this, preferring to go out with Guillermo, the owner of Coral Dreams, who is an ex-Argentinian navy diver with over 9000 dives under his belt. 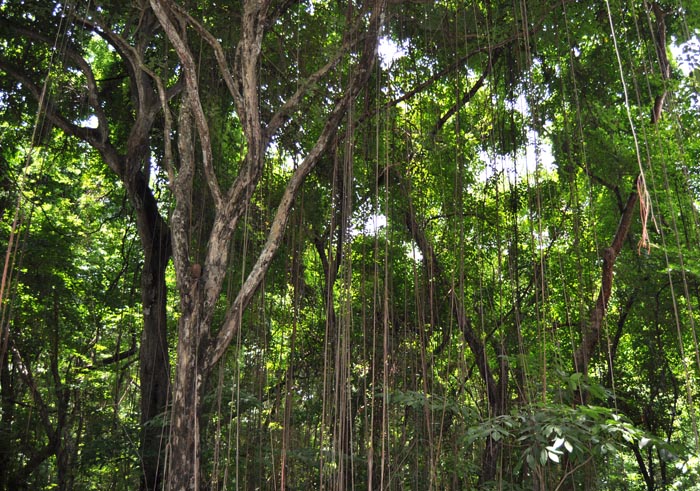 During our drives back and forth to town on the main road we passed a construction site on a driveway where there was a teeny-tiny kitten curled in a ball. We stopped to check on it and it was sleeping. We passed it a couple more times that day while walking and it was still alone, but up and awake and crying. It broke my heart and I tried to figure out how we could help it/take it, but there was no way we could do anything. I knew we could not take it home, nor could we even take it back to the hotel because I could not be sure anyone would care for it after we left and I didn’t want to abandon it. Once, we found it in the road and I moved it back onto the driveway. I hoped its mother would return if it stayed there. Later, we saw that someone had left it a bowl of milk and we had hope that someone would finally take care of it.

For lunch we walked back into town to go to Fonda Clarita. Lunch today was not as good as yesterday, with the meal being meatballs, rice, and spaghetti, but that’s the risk you take with a place which only serves one thing.

In the afternoon we went back to town to go on the snorkel trip ($40 each).  It was only us, Scott, the boat captain Guillermo, his two assistants, and a very young couple from Greenland. Yes, Greenland. I’d never been to Greenland, nor met anyone from there, so it was pretty neat to chat with them.

Our first stop was off shore of a verdant deserted tropical island. Yes, this is paradise (see the photo at the top of the page). We hopped in and there was none of that shock of “oh! the water is cold!” Not even a little bit. The water temperature was tepid, and while not good for tea, perfect for snorkeling. I wish I could list all the things we saw, but I’m not good with the names. I do know there were parrot fish chomping on coral, little angel fish and two eels fighting for territory among all the other sea creatures. Not a lot of pretty coral though. Underwater photos thanks to Scott. 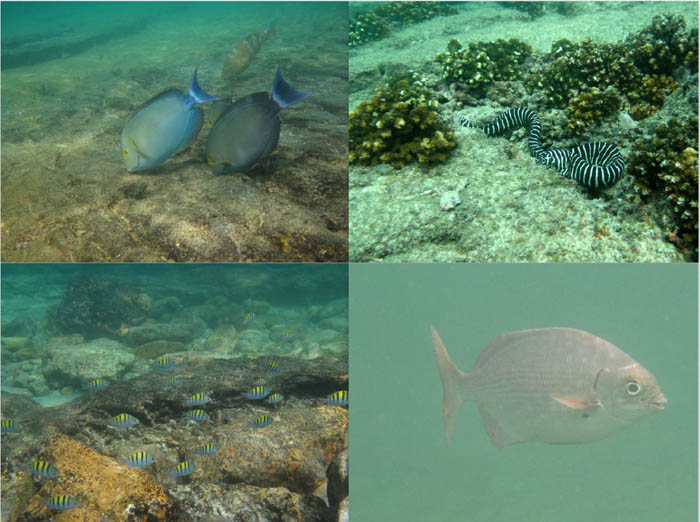 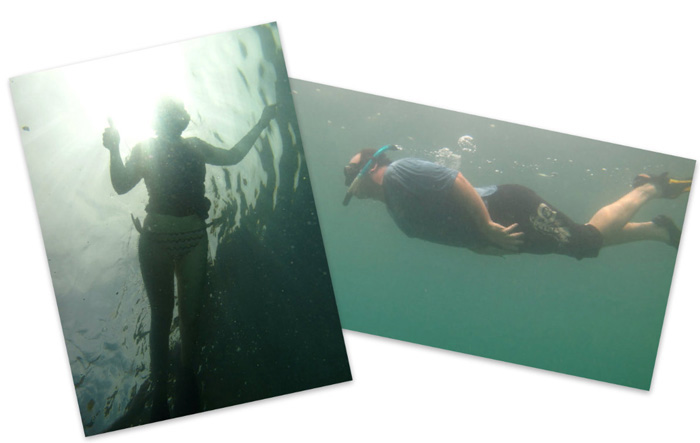 After that stop, we went to an island which was no larger than a sandbar when the tide was low and according to Guillermo, not much bigger than a car (and sometimes fully covered) when the tide is high. David found some barnacle shells and because they have holes in the center, put them over his eyes, and had a merry time making faces for the camera. For a short video of the island, see the bottom of the page.

Next stop was Mogo Mogo, or Survivor Island. As in the “you’ve been voted off the island” Survivor TV show which has been filmed here in the Pearl Islands three times. Guillermo told us a story of a family who asked to be dropped here for an overnight a la Survivor, only to call in the middle of the night via cell offering $100 to have someone bring them a case of beer. Someone did (bring them beer) and the the morning, when they were picked up, the beers had all been drunk (by 1 person, the Dad!). Here, we did not snorkel, just spent some time floating in the water.

On the way back to Isla Contadora we headed out to and area between a few islands where the whales had most recently been seen. It wasn’t long before we saw the tell-tale spouts of water and flapping flukes. This was my first experience trying to photograph whales, and it was way harder than I expected. It was so exciting to see them, I found myself torn between wanting to try and focus the lens and just wanting to watch them. Plus, focusing was hard given the movement of the boat, movement of the whales and my auto-focus lens not knowing where to focus against blue-grey sea and sky of the same hue. 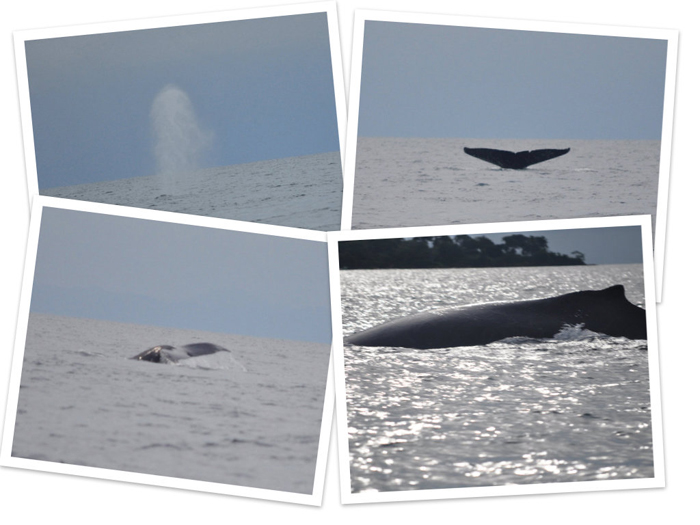 The last stop was next to Isla Bartolome where thousands of pelicans, yellow footed boobies, and other sea birds call home. 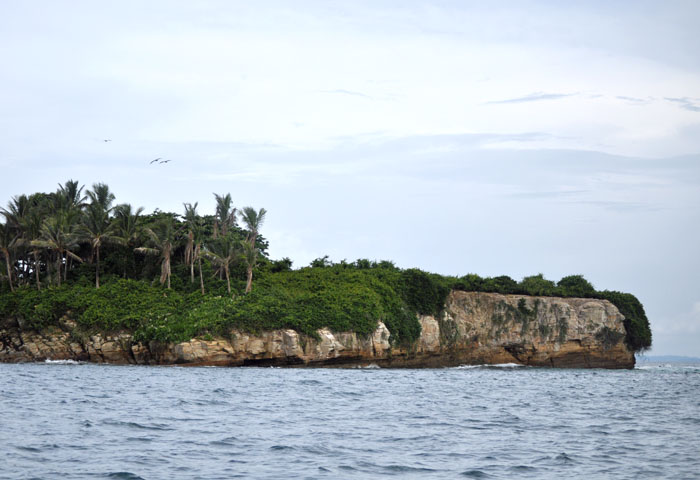 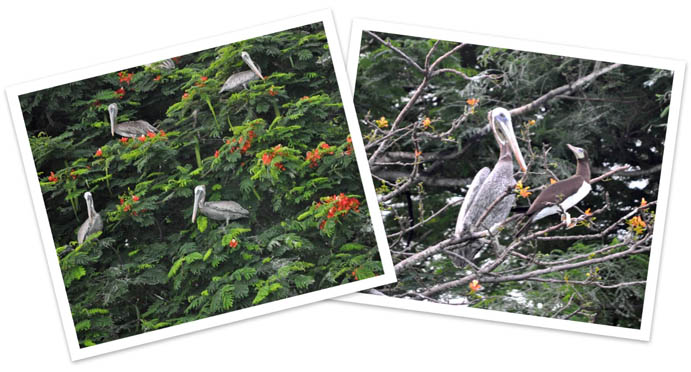 Back on shore, we were standing in front of the Coral Dive shop making plans for the next day, when the couple from Greenland were talking to each other in Greenlandic (that’s what it’s called, I had to look it up), obviously debating something.
Then the girl said, in all sincerity, “Do you ever eat the whales?” Guillermo blanched and sputtered “no” and I said, “No, they’re protected here. Do you eat them where you come from?” They both nodded and said they did eat whale meat in their culture, though now it was rare and expensive. We all chatted about it for a while, reiterating that whales are considered a protected species in most parts of the world and that it wasn’t part of the local culture to eat whale meat (they seemed to find this as curious as we did of their eating it). After they left, Guillermo was visibly shaken and said that the question made his skin crawl, but I think he handled it quite well.

Dinner was at the well known Gerald’s opposite the airport runway on the far side. It has a nice open air pavilion, but service is very slow and the food was mediocre. It’s German-owned so David ordered the schnitzel and declared it “not bad.” I had a pizza and it was just ok. I just keep telling myself, “it’s not about the food, it’s about the wildlife.” Right? Right.

Video from the tiny island: