Random Article
Search
July 15
Isla Contadora to Panama City
Today our plan was to leave Isla Contadora on the 9:30 plane, pick up a rental car at Albrook airport, and drive to the Canopy Tower to be there in time for lunch and the afternoon bird watching walk. Tomorrow we’d check out at 9am, drive to the Caribbean coast and check out the ruins of the Spanish forts at Portobello, and then make our way back to Sierra Llorona Lodge for another afternoon of wildlife watching. Alas, none of this was to happen as planned.
It was dumping rain when we woke up. The fountain in the middle of the courtyard was overflowing and turning the breakfast area into a lake. By 8am we knew our plane would not be coming at 9:30. A giant storm was sitting directly over the Bay of Panama, purple on the radar map, and moving slowly toward Panama City.

Here’s how hard it was raining:

We waited to hear news. Nothing. We waited some more. Finally, around 11am, we decided to cut our losses and reconfigure as best we could.

Fortunately, we still had intermittent internet access, going in and out with the storm. I got on the netbook and did my best at vacation damage control.

Around 2PM the word coming from the tiny airport office was that we “might” be flying some time around 5:30 PM. At 4:45 we went to the landing strip and checked in at the Aero Perlas office. They weighed our luggage and then asked us to step on the luggage scale with our carry-on bags and weighed us too. At 5pm we were told the plane was in the air and on its way.

Have you ever wondered what it’s like to fly on a tiny prop plane? Here’s a little video of the takeoff and landing of our flight from Isla Contadora to Panama City.

Once we got to Albrook airport, I turned on my phone and there was the reply from my mom; the plan had worked flawlessly and our room was booked. We decided to forgo the car rental, at least for now, and just take a taxi to the hotel and figure out later how we would get to the Canopy Tower the next morning.
We arrived at the hotel, tired and cranky from a long day of uncertainty, anxiety and waiting. But it was all made better when the gentleman behind the desk apologized for not being able to give us the room upgrade my SPG Gold Status usually offered us a different type of upgrade.  They we going to give us access to the club lounge which offered free wifi, so $13/day room internet access was not needed. Not only that, included with the lounge access was a nice cocktail hour with food and a breakfast buffet in the morning. We’d experienced this at the Sheraton Saigon and knew this was an appreciable bonus.
The room was really quite nice, on the 8th floor and looking out over the neighboring high rises. It was decorated in greens and browns and had a frosted glass wall separating the bathroom from the bedroom. This wall was shared by the walk-in shower (no tub). It had the basic Sheraton amenities; Bliss bath products, coffee maker,safe, etc. The bathroom was nicely tiled in stone. My only complaint is that the shower temperature was inconsistent both mornings I used it, two different days, two different rooms. On the other hand, David showered at night and had no problems. 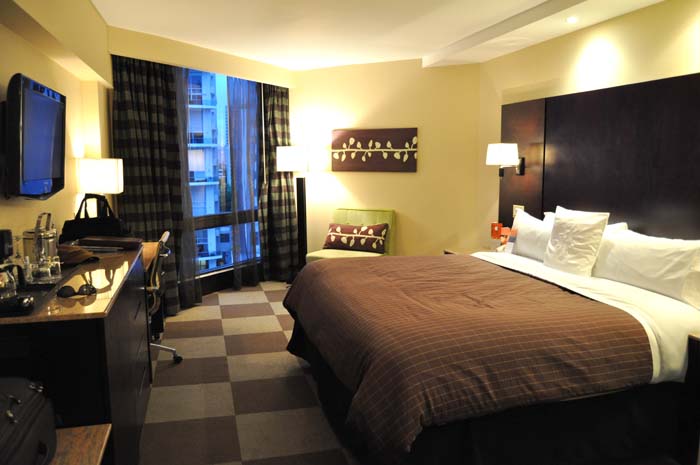 At this point we had to figure out how we were going to get to the Canopy Tower lodge which, in Soberania Park, was about 30 minutes outside the city in the same direction of the Miraflores Locks. My guidebook said a taxi there would cost $10-$15 each way. The Canopy Tower had offered transfers at $50 each way. We asked at the concierge desk what it would cost for us to set up a taxi R/T (because we would now have to return to the Sheraton after leaving the tower) and we told we could just hire one of the taxis outside the hotel (they would assist with this) and it would be $35 each way. We thought we could probably book this cheaper ourselves by going outside and speaking directly to one of the taxi drivers .

We also checked with the Budget rental car desk in the hotel and the least expensive car, a Toyota Yaris, with no extra insurance, and no GPS, would have cost us about $50, plus gas and they didn’t have a decent map. This was double the rate I had originally booked online at Thrifty.com so it’s probably best to book cars in advance from the US. We decided to wait until the morning to figure out the best thing to do, but we knew were were going to somehow go by taxi as there was no advantage to renting a car for only 1 day.
We took the netbook and the Kindle and headed up to the club lounge which is on the 15th floor. Key card access is needed in the elevator to get the room floors and to get through the door into the lounge.

The Lounge has two TVs, couch and table seating. We chose a table along the floor to ceiling windows and this would become “our” table for all of our subsequent visits to the lounge. There was finger food available, drinks, wine, and beer. We had a lovely glass of Chilean Cabernet, some snacks and decided that would work for us for the night. We were in no mood to go out in search of a meal. The downside to this hotel is location; it’s right across from the convention center in an otherwise mostly residential neighborhood. 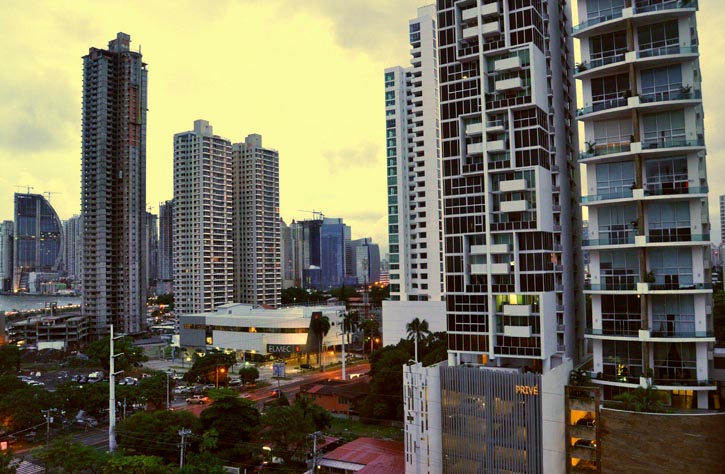