Random Article
Search
July 17
Canopy Tower to Panama City
Mornings come early at the Canopy Tower. What’s that saying? The early bird gets the worm. Here, the early riser gets the bird. 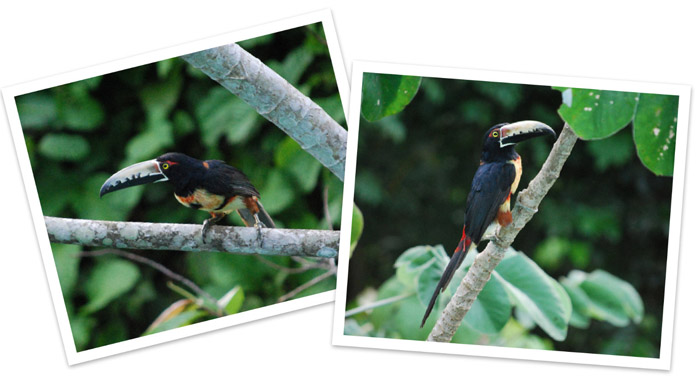 We rose by 6 am to have breakfast along with everyone else because those who were not leaving today would be going out on early morning walks. In addition we were told the early morning bird watching was good from the top of the tower from which there is a 360 degree view all the way to Panama City and of the canal and surrounding jungle area. Check out time here is 9am, though if you want to stay to do a morning (paid) tour, they gladly extend the check out time. 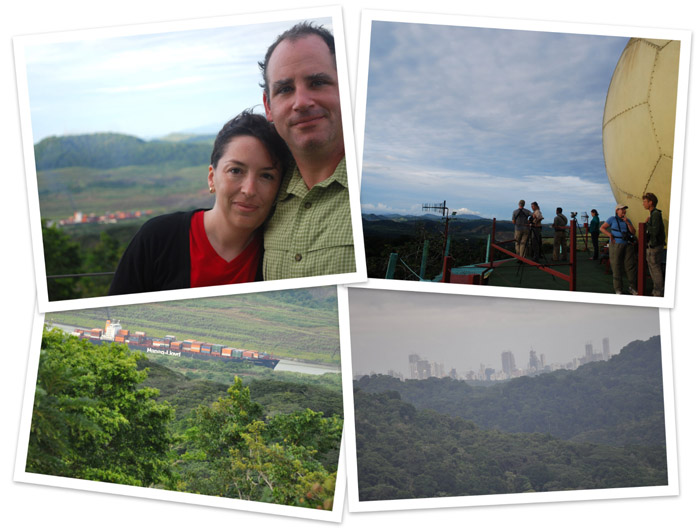 After breakfast, we spent some time taking photos up on the roof and I spent about half an hour down by the hummingbird feeders trying to capture these wee kamikaze birdies. I have to say, they are one of my favorite birds and I took over 100 photos just to get 4 decent ones. At home we only have Rufus and Anna’s hummingbirds. Here, there are at least half a dozen different kinds including a long tailed fellow in the top left photo below. 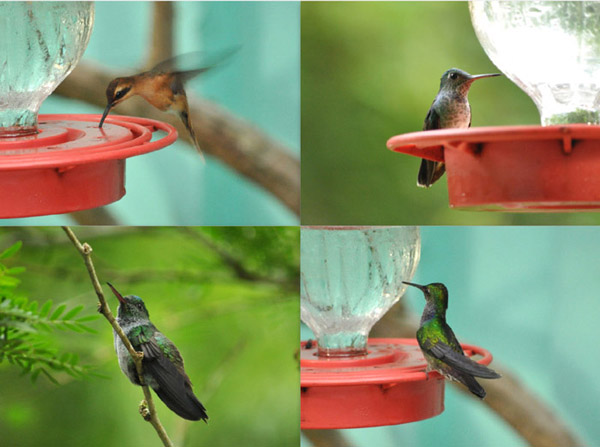 Promptly at 9am, Pedro the driver showed up. Our new friend Laurel needed to get back to her boat, so we agreed to give her a ride and drop her at a market near the Albrook airport since it was literally right on our way. The drive back to the Sheraton was quick and we were there well before by about 9:30. Fortunately, they had a room ready for us, this time with a water view, and another upgrade to include the club lounge. From our room, we could not only see the water, but the convention center directly across from the entrance to the hotel. 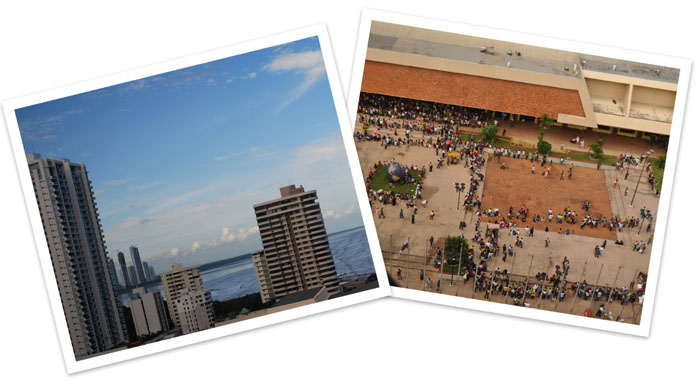 When we had been here on Thursday, we’d noticed huge lines of people waiting to get into the convention center. When we asked about it, we were told they were all trying to get their immigration papers to live legally in Panama. People waited in line overnight, and any time someone would exit the building, documentation in hand, a cheer would go up from the crowd. If it looked like anyone was trying to jump the line, the crowd would roar and one of the gun toting policia there to keep order would step in to see what was going on. There was a general carnival like atmosphere, and people were sitting under umbrellas on folding chairs though the scalding sun, the rain, and overnight. Today, the lines were still there.
I noticed a couple of booths selling food so we went down to check it out. I was hoping for something good, some version of Panamanian street food, but no such luck. What we found were grilled hamburgers and chicken sandwiches for $5 each and honestly, they did not look that good at all. At this point, we weren’t sure what we wanted to do with our last day in Panama. But it was lunch time and there was one thing left I wanted to see; the central fish market.
First, we decided to walk around the neighbood near the hotel to see if we could find someplace good to go for dinner. This was a bad idea. It was extremely hot outside, we really didn’t know where we were going, and we ending up walking in circles for about half an hour, getting overheated. Finally we decided to hail a taxi to take us to the fish market but then could not find a taxi. After more walking and more sweating, right when we were about to chuck it in and go back to the hotel, a taxi stopped, dropping someone off. For $3, the driver agreed to take us down to the market.
The fish market was smaller than I expected it to be. I’d seen it in photos and on Anthony Bourdain’s No Reservations show, but this market, built by the Japanese as a “gift” to the people of Panama, was only about 1/2 a block square. Still, the fish were beautiful and cheap. Spiny lobsters which looked to be about 3 lbs each could be had for $6. There were shrimp of every size and shape and fish and shellfish already prepped for ceviche, vendors loudly hawking their wares and very cool fish themed blue wrought iron doors. 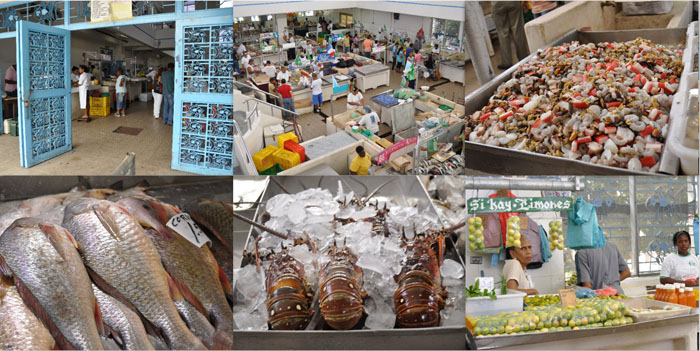 We did a quick walk through of the market and then went upstairs to the Restaurante Mercado de Mariscos which overlooks the floor below. They serve primarily fresh seafood of course, and we ordered a mixed ceviche and a corvina al ajillio. With a couple of beers and a tip, the total was $19.

After watching Anthony Bourdain’s Panama episode of No Reservations, and his visit to this market, I knew we had to try the ceviche lady so on our way out, we stopped at stall #2 and got a couple of cups of the Ceviche de Pulpo for $2 each. They were excellent and a great value compared to what we’d just had in the restaurant. 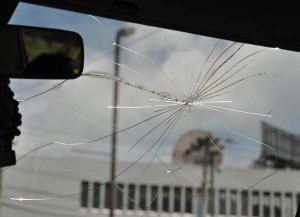 Outside the market, we grabbed a taxi which turned out to already have a customer in the front passenger seat.  I’d read that taxis in Panama are often “share taxis” so off we went. We had to stop once because the window did not roll down and the driver had to get out, go around, open the door and manually push down the window. No a/c, cracked front window is de rigueur. The other guy was dropped off along the way, and we made it back to our hotel after chatting with the driver about his time in the Panamanian military in the 1970’s. He told us the airport was located where there is now a large mall among the skyscrapers.
For dinner, we were happy to be walking some place close by. Outside the hotel, the traffic was in gridlock due to a huge wedding in the hotel and the crush of people across the street at the convention center. Someone had abandoned a car in the driveway of the hotel. The guests in their fancy clothes were getting out of their cars and walking in from blocks away.
Our dinner at Jimmy’s, two blocks from the hotel on the other side of the convention center, was one of the best ones we had in Panama. Sancocho al Pollo ($3.50), a wonderful chicken broth based soup with a piece of chicken and chunk of yucca in it. This is the unofficial national soup of Panama and I find myself wondering I haven’t been eating this all along. David ordered the “‘Angeleo” style steak ($14.50) which was a very thick cut (maybe a culotte?) stuffed with slices of garlic and served sizzling on a hot cast iron platter. It was cooked a perfect medium rare and came with a salad and fries. We even got to try yet another local beer, the Soberana, and it was fine, but reverted back to Panama beer. The wine list looked decent and had some Spanish wines on it, not just the typical Chilean and Argentinean wines one normally sees here. The restaurant is large and busy with a mural of Greece on the wall (the owner is Greek). As far as we could tell, the other patrons seemed to be mostly families of locals. 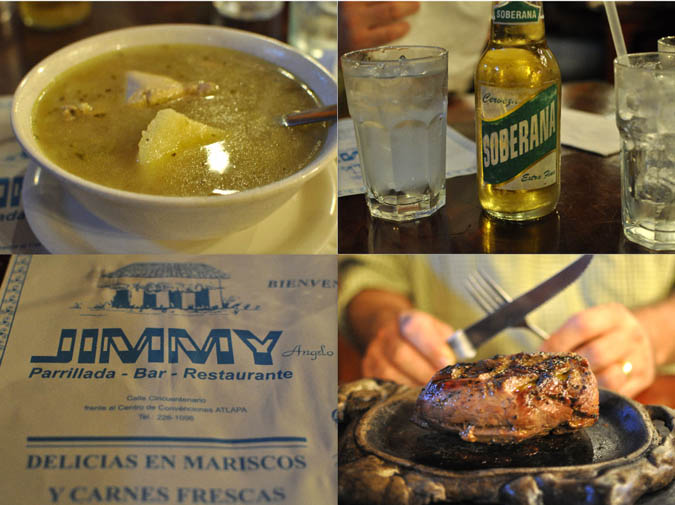 Sunday July 18th, 2010
Our flight the next day was around noon and we took a hotel taxi which cost $28 and included the toll road cost ($2.50 each way). A regular taxi would have cost the same as it seems the fare too and from the airport are fixed and even though the Sheraton is much closer than downtown, that did not seem to matter. The ride was only about 15 minutes with no traffic on a Sunday, but expect half an hour during the week.
Because we had carry on only, our bags were tagged and we were told to go through security and immigration. This was quick and they didn’t even stamp our passports. We had some time before boarding so we found the free wifi area (near gate 33, the signal is too low elsewhere) and David watched a little streaming golf of the Master’s Championship.
When it was time to board they did a secondary screening of every one’s carry-on luggage, opening every single piece. It took forever. While waiting, we discovered we had to check in again at the gate because we’d not checked in properly out front (wish they had mentioned this when they tagged our bags). The flight was easy and fast and we were home in time for dinner.
Go here to see all of our posts on Panama.