Random Article
Search
This trip was a quick 3-day weekend in San Francisco in celebration of our 15th Wedding anniversary over Labor Day weekend 2010. We’d had such a fantastic time when we went last year, we couldn’t wait to go again.
We flew Southwest Airlines, Burbank to Oakland, opting for the $10 per person each way extra fee for priority boarding. This was worth it as we were taking only carry-on luggage and we knew it was going to be a busy because of the holiday weekend. I’d booked a room at the Westin St. Francis, a Starwood property for $60 plus 4000 SPG points per night.

We arrived into Oakland Friday morning  on time after an easy flight. Like our last trip, we took the AirBart shuttle bus from the airport to the BART station ($3) and then the BART into the city, getting off at Powell street ($3.80). It was fast, about 40 min total, and very efficient. We then walked the 3 blocks to the hotel at Union Square. Before leaving the Metro station, we asked a MUNI employee about buying a MUNI transport pass and she directed us to a Walgreen’s at 4th and Market which she said she had just verified they had passes. Upstairs, there is a MUNI kiosk where you can buy the passes and cable car tickets but the line was more than a block long. 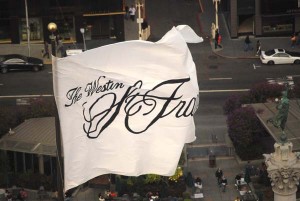 The Westin St. Francis at Union Square is a historic hotel built in 1904. It has hosted presidents and queens, sometimes both at the same time. The lobby still has some of the old fashioned grandeur along with a modern tower building behind the hotel.  I’d called after making the reservation online to request an upgraded room, given that it was our anniversary and I have SPG Gold status. When we checked in, they had assigned us a standard room, but when asked, they upgraded us to a grand deluxe in the tower.

Our room was on the 29th floor, overlooking Union Square, the city, and the bay in the distance. We could see Coit Tower and the Transamerica Building. Views on the other side of the tower might include the Golden Gate Bridge. 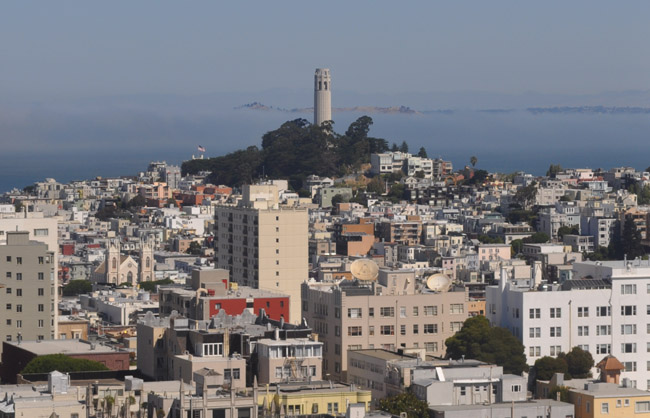 The room was spacious and probably renovated in the last few years. It had a king sized bed, desk area, large flat screen tv and plenty of room to move around. The bathroom had odd french doors instead of a single door but I think that was so they would not bang into the main door to the room. It had the usual Starwood property Bliss product amenities. 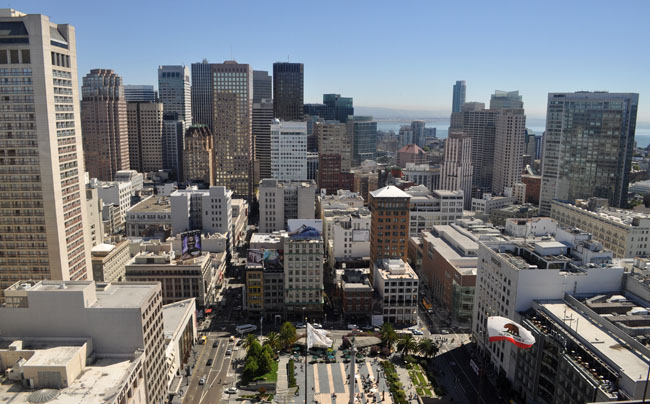 We had plans to meet David’s Aunt for lunch, but first we had to buy our 3-day Muni passes and headed to the Walgreen’s at 4th and Market as directed. There was no line and in short order, we had our 3 day passes ($20). Rides are $2 each on the bus and $5 per cable car ride so these passes can pay for themselves very quickly. I had downloaded directions the day before from the MUNI site to where we were going and had them in my Kindle which I was using to store all my itinerary information and guidebook information created from my personal Google Map of San Francisco.

Off we went to Filmore St, getting on an express bus and arriving half an hour early. After a forgettable chocolate croissant and cappuccino while waiting, we made our way to Filmore and Bush to the restaurant Out the Door, an offshoot of the popular Slanted Door restaurant in the Ferry Building. There we met up with David’s aunt, who works nearby. She’s recently written a very moving book about about “lessons for the living, from the bedsides of the dying” called Last Acts of Kindness. This is a helpful book for anyone going through hospice with a loved one. For David, this book is especially moving because it includes the story of his mother’s passing.

Out the Door is upscale Vietnamese street food and most of it was very good, albeit not exactly authentic. We started with decent spring rolls filled with shrimp, pork and vegetables and a Vietnamese crepe which gets wrapped in lettuce and dipped in sauce and was very tasty and similar to the ones we had in Hue.

I ordered the pork over rice noodles with crispy imperial rolls which was similar to one of my favorite dishes, Bun Cha. This was probably the best dish of the bunch. David got a wide noodle (which weren’t) with flank steak and Hungarian peppers which turned out to be a bit bland and David’s Aunt got a nice looking chicken salad. They didn’t have any Vietnamese beer on the menu (is it possible to get here in the US?) so David got a Belgian wheat beer. Lunch was around $65 before tax and tip. 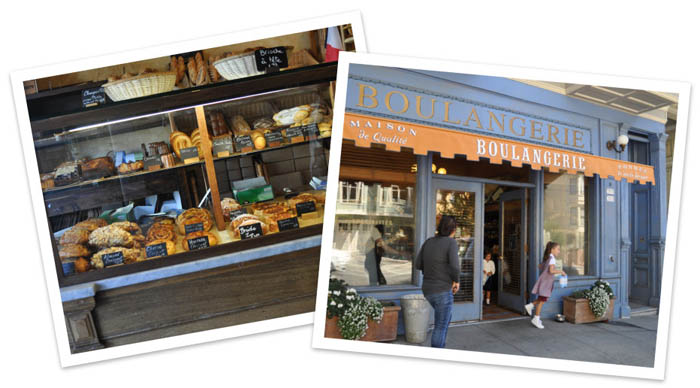 After lunch we walked up and down Filmore, checking out the shops and going into the Boulangerie Bakery. From there, we walked down Filmore, about 8 blocks and then over one, to Alamo Square where the “Painted Ladies” are. No, these are not “ladies of a certain profession” but rather the beautiful old Victorian houses which line the street around the square. The square is actually quite a lovely park on a hillside taking up about 2 square blocks. We spent about an hour there, taking photos, relaxing in the sunshine on the lawn and enjoying the view. 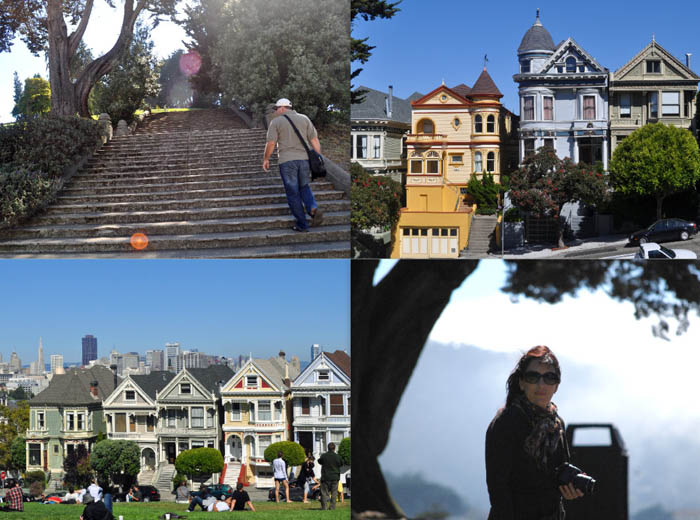 After that, we took the bus back to the hotel and just decided to take it easy until dinner. The only free wifi in the hotel is down in the main lobby area where there is a bar and coffee counter so we went down there for a few minutes to check email and look at the MUNI site to see if it would be easy to get to the restaurant by bus. David had an over-priced martini ($14++) but he enjoyed it because it was one of the hotel’s old signature drinks (a gin and vodka mixed martini) and it was made by a bartender who has been working at the hotel for 40 years. 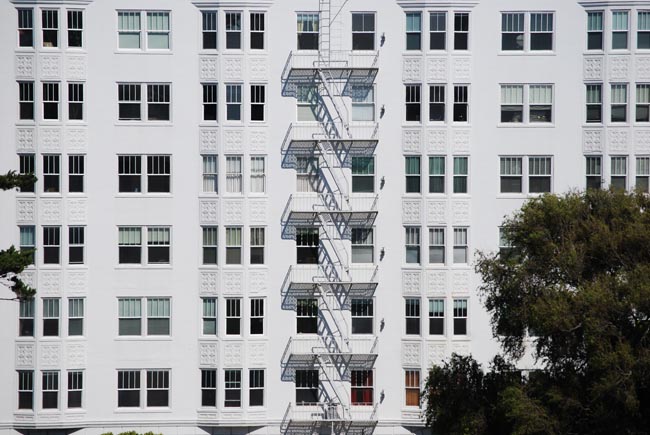 We got dressed for dinner and then waited 20 minutes for a bus which never came. Finally, we gave up and took a taxi to Perbacco. The restaurant was full but we only had to wait about 3 minutes before we were seated (we did have a reservation). Our server was wonderful; he recommended specific dishes, was able to answer questions about the menu and even brought us wine to taste. I really like that the restaurant offers many of their wines by the 1/4, 1/2 and full liter. They also offer pastas in small and large sizes

We shared an appetizer of heirloom green tomatoes, burrata cheese and fresh corn. Then we shared langaroli al brasato, a pasta filled with beef cheek, served with a velvety sauce made with quince (sugo di cugna) and a crumbled hard Italian cheese called Cusie al Castagno on top. The flavor was outstanding, really enhanced by the sharpness of the cheese.

For my entree I had a cooked-to-perfection, roasted veal loin, first cooked sous-vide, with porcini mushrooms and artichoke hearts and David had a roasted quail breast stuffed with foie gras and served with braised chard and chanterelles, also excellent, though very rich.

It’s hard to miss the cheese table when you walk though the restaurant so of course we knew what David was having for dessert; one of the three blue cheeses from Italy and a 20 year tawny. I had the burnt caramel gelato with vanilla sea salt. Heaven. Dinner was $143 before tax and tip and was an anniversary gift from my mother. Thanks Mom!

We walked back to the hotel, enjoying the night and walking off some of the meal. The view from our room at night was lovely. 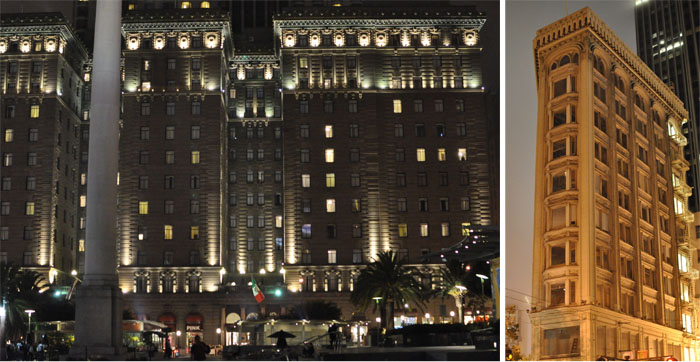