Today is the first day of school for Knar Primary school which is about an hour outside Siem Reap. This is the day the Foundation gives out uniforms and school supplies along with providing a hot lunch for all, prizes for last year’s first in class, and bicycles for those who graduated the 6th grade as well as top in class for 4th and 5th grade.

Two vans left the guesthouse at 6 am filled with supplies and food for 400 people. The cooks started prepping early for the kid’s favorite lunch, fried noodles with vegetables and chicken. We arrived about an hour later to a school yard filled with smiling children, setting up their desks outside for the day’s assembly. There were balloons and a music truck to provide entertainment as well as an audio system for the presentations. In the area behind one of the classrooms is an outdoor kitchen where lunch preparation was in full swing, along with the older students helping with the prep work. 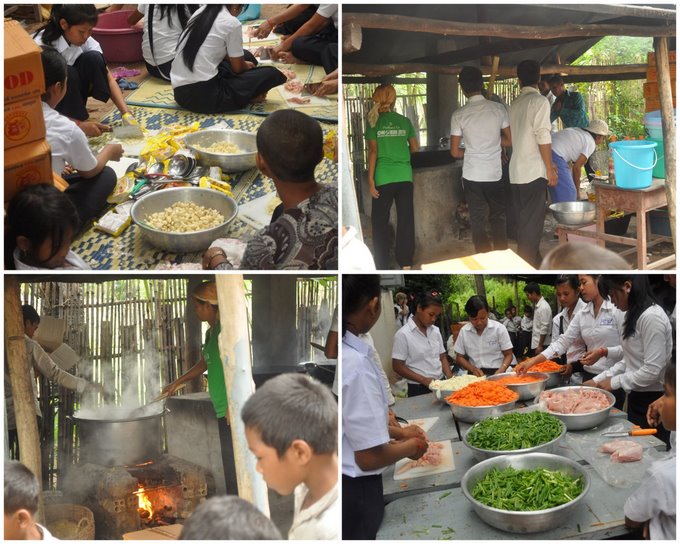 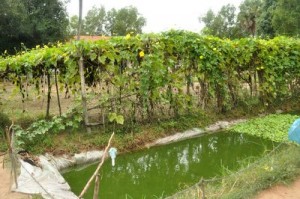 We visited this school in 2007 and while it pretty much looks the same as it did then, there are some changes. The kitchen area has been improved, there’s a new fish “farm” next to the garden and a chicken coop. However, the older classroom building looks more dilapidated now, with entire sections of walls missing. Some of the kids here have ongoing medical issues due to recurring infections and we will return later in the week to address some of those issues. 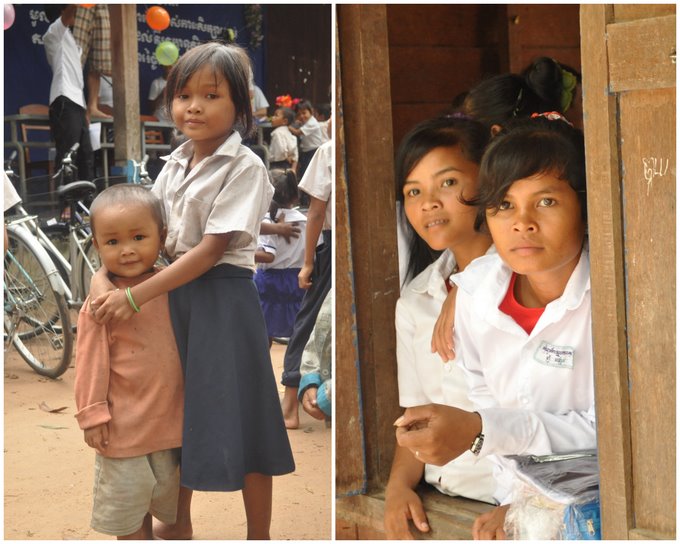 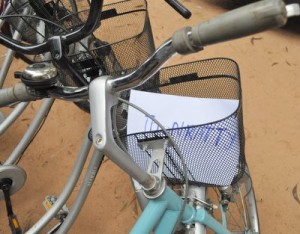 The presentation of awards for the best students is always a highlight in any school and this one was no exception. A small crowd of proud parents were on hand to see their children receive awards; some were packages of books, art supplies and a few toys and some were the coveted bicycles. As soon as the bikes arrived, those who knew they would be receiving them rushed to pick one and put their names in the bike’s basket.

The bicycles are a huge incentive to stay in school and do well because for most, they are the only transportation for an entire family. Today there were almost 30 bikes to be passed out to first in class for 4th and 5th grade and to all graduating 6th graders. I asked what happens if a child gets a bike in the 4th grade and are again top in class in 5th grade. Will they get another bike? The answer was a resounding “Hell yes! If they can be first in class every year, they can get bicycles for their whole family.”  The bicycles are used and refurbished from Japan and look almost new. They cost $40 each and are covered by donations (many people choose to donate specifically to the bike program). This incentive is given out in every school the PLF supports. 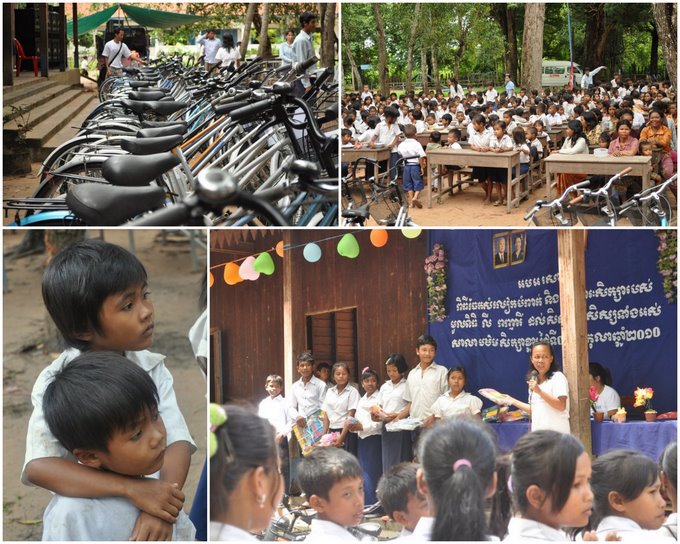 In the middle of the presentations it began to rain one of those typical South East Asian monsoonal dumpings. This delayed things for a while as everyone took cover, but it stopped quickly and things resumed. By this time lunch was ready and everyone pitched in to serve the noodles out of big buckets to each of the kids who had brought a bowl and spoon from home. I don’t have any photos because I was busy serving up seconds and thirds to tiny people who should not have been able to eat that much in one sitting!

The next step was the distribution of supplies. The children split up by class into different rooms and waited for their name to be called. Each one was given a bundle containing a uniform specific to their size (measured earlier in the month) and another bundle with school supplies (books, notebooks, filled pencil boxes, backpack, etc). The Ly family along with all the tuk tuk and van drivers spend weeks assembling these bundles (all 2400 of them!) at the guesthouse prior to the beginning of the school year. It’s a huge operation and they do it all with a sense of fun and without complaint. 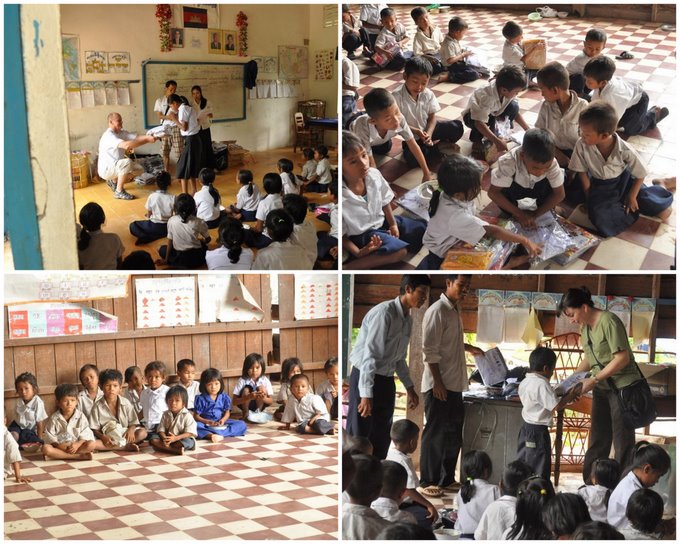 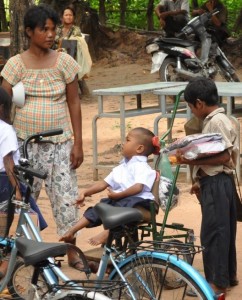 The little boy at left has cerebral palsy. In Cambodia, schools can choose whether or not they accept disabled students and usually they choose not to take them. The foundation has been encouraging Knar school to let this boy attend with his older brother because if he does not, then the older boy stays home to help care for him instead of attending school.

He’s very sweet and alert. He smiles when you speak to him and looks right at you, but he is unable to talk. He’s not able to do much with his hands, but he’s able to pick up things with his feet. In most SE Asian cultures, feet are considered unclean, and it’s thought of as “rude” to do anything with them so it took a lot to convince his family to allow him to learn to do things with his feet. Since they have stopped preventing him, he has become much more adept at using them. We will visit him again later in the week. 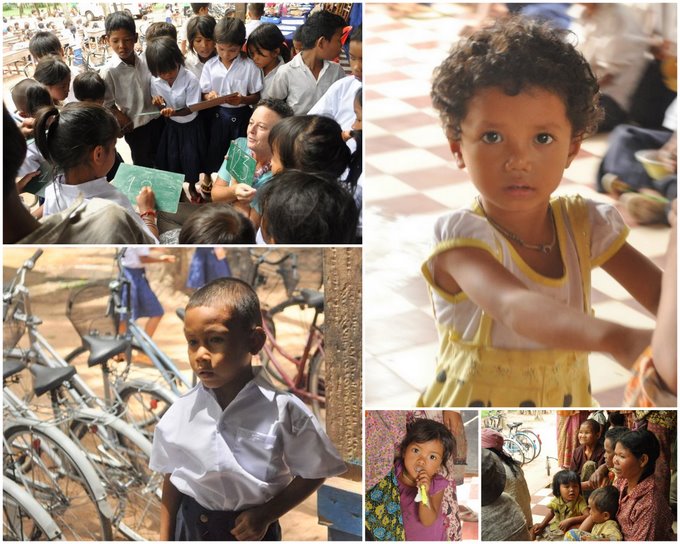 Exhausted from the day, Lori, Lynn, my mother and I went downtown to have an easy dinner at Khmer Kitchen which is right across from the old market . When we ate here in 2007, I was not at all impressed even though this place is very popular. This time, it seems like the cooking has vastly improved. Everything was very good; fresh spring rolls, chicken with sauteed morning glory, pork and eggplant, chicken with yams in custard, and “piece pumpkin with tofu” in custard. All for $5 per person including some leftovers which I took back with me. 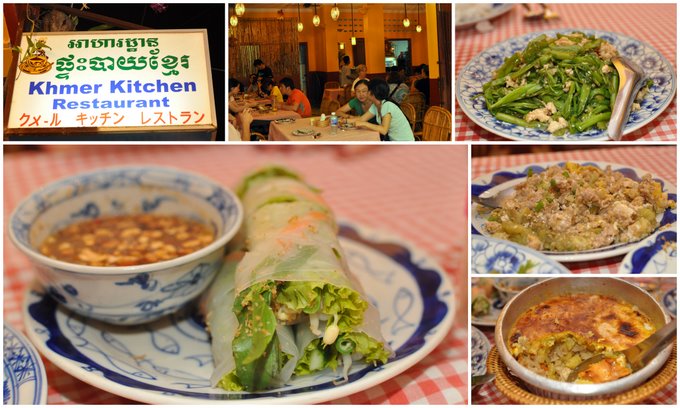 If you want to read the trip from the beginning, please see the main Cambodia page.