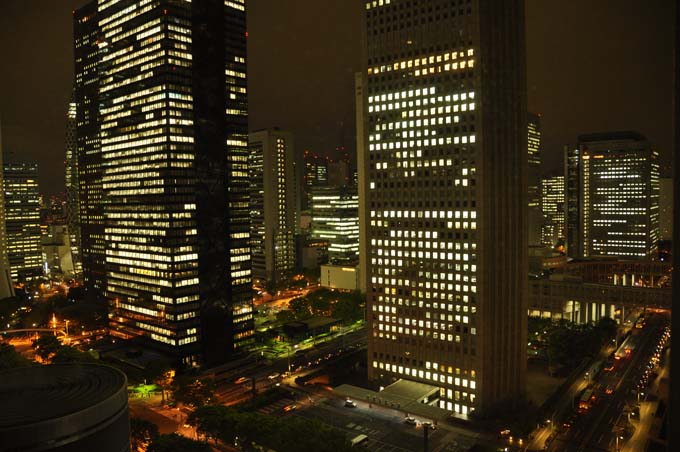 We left Los Angeles on a Friday afternoon and arrived in Tokyo on Saturday night. This flight was supposed to be on the new Airbus A380, but after the earthquake, Singapore decided to delay the launch for the new aircraft on that route. Instead it we were on a 777 both ways. Because we bought the package though a travel agent we were unable to pick our seats in advance. No amount of phone calls or emails to Singapore or the travel agent could change this. I was never able to get a reason as to why this is their policy either.

Forty eight hours in advance, we were able to check in online and selected two aisle seats in middle section with an empty seat in between. But we gambled and lost and had a guy sitting between us for the entire flight. It’s been over a decade since we’ve flown on Singapore Airlines and while they are known for Business and First, Economy is also pretty good. The seat pitch is tight, as is the recline, but there are good footrests and the food was decent (we selected the Japanese meal both directions). They even have good snacks available between meals. The wine however, was awful. The entertainment system is excellent; a 10” screen at every seat with video on demand. I watched 3 movies on the flight over and could have watched more.

We arrived around 7 PM on a Saturday night and it was very fast going through customs/immigration. There was no line at all and our bags were coming down when we arrived. As part of our package, we had tickets for the airport limobus which goes directly to the Hilton. We simply took our vouchers to one of the many “limobus” desks in the arrivals terminals and got a ticket. They told us where to go and we waited about 5 minutes for the bus to come. Our luggage was tagged and put under the bus. It took about 90 minutes to get to the hotel.

At check-in we were told we were “Upgraded” to deluxe room on 25th floor, but only seemed to be higher floor (nice view) with no extra amenities. There was no art on the walls, no robes, but it did have a very large safe, flat screen TV (the only channels in English are BBC news and CNN), and hot water kettle with teas and instant coffee (no coffee maker). The bathroom was very tight with plastic walls and decent toiletries (lots of choice) and a Toto washlet toilet (see my observations post for more about toilets in Japan).

Tip: Some mornings we used the hot water kettle to make packets of oatmeal we brought with us for breakfast because we were up so early (4:30 AM most days). The Starbucks about a block away does not open until 7:30 am. Breakfast in the hotel is 3600 yen (about $40 per person) for the buffet and was not included with our room.

Did I fly all the way to Japan to have my first meal at Denny’s?

By the time we’d checked in and were ready to go out to eat it was about 10pm. In the immediate area surrounding the Tokyo Hilton there just aren’t a lot of restaurants open very late. There are very few restaurants visible at street level, but most of the big buildings have an underground mall area with restaurants. Unfortunately, most were closing at that time. If we had known a little more, we could have walked about 8 blocks to the main Shinjuku area where there are tons of restaurants, though I doubt we would have found a lot open because many places seem to shut down around 10pm.

It’s funny how we have this image in our heads about how things should be. I wanted noodles for our first meal and was determined to get them. Who would have thought I’d find them at Denny’s? But that’s where we ended up, jet lagged and famished, unwilling to search further.

The Denny’s near the Tokyo Hilton is open 24hrs and is only about a block from the hotel (exit hotel, turn right). To our surprise, we found a restaurant which very much looks like a Denny’s, but with a completely different menu. Gone are the Grand Slams and Chicken Fried Steak, replaced by Japanese favorites including fried pork cutlets, gyoza, and a decent bowl of ramen. In addition, they serve Asahi beer! There are big plastic menus just like in the US, but (of course) they are all in Japanese. We were thankful for the photos of each menu item (point to order works!). The menus also have a calorie count for each item, like many chain restaurants now do in the US.

Like Denny’s in the US, this place had similar late night demographics. There are the teenagers crammed around a big table, eating ice cream and looking at their cell phones and video games. There’s the single guy, chain smoking, reading a magazine. There are the lovers, canoodling in a booth, oblivious to the rest of the world. We were the only dazed tourists in there.

On each table is a little bell/button. Press it and it will chime, signaling the server you are ready to order. They probably won’t come until you do. Smoking is still allowed in restaurants so it’s likely even if you sit in a non-smoking restaurant, you will still smell cigarette smoke. 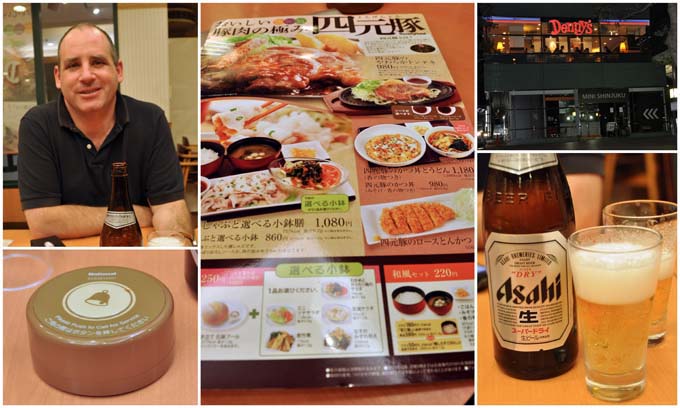 We both opted for a bowl of ramen and shared a large beer. While it wasn’t the best ramen I’ve ever had, it was tasty, filling, and hit the spot after the long flight. Satisfied, we were able to go back to the hotel and get some sleep in preparation for a big day of sightseeing to come.

Tips and Observations For A First Time Traveler To Japan

Half Day Tour of Tokyo-Can We Learn to Love the Bus and Follow the Leader?