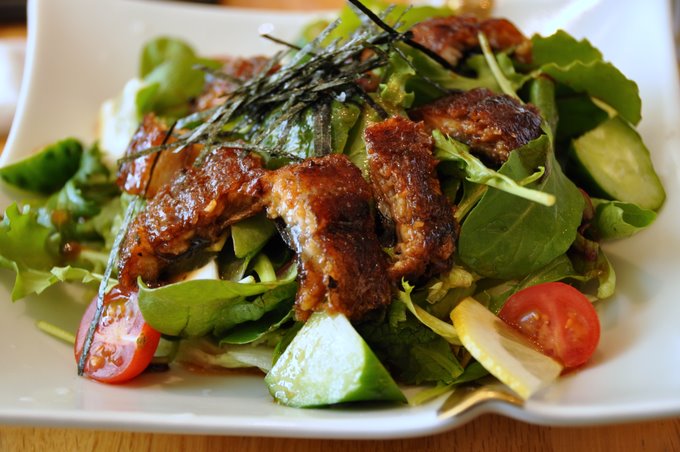 The Hitsumabushi restaurant on the 12th floor of the Ginza branch of Tokyu Hands department is the main branch of a well-known Nagoya eel restaurant. They are famous for their special Nagoya-style tamari sauce on unagi (eel) which has been grilled over bincho charcoal.

At lunch time there was a full house and people waiting on child sized plastic chairs along the wall outside the restaurant’s front door. Uncertain what to do, I took a seat on one of the chairs and David went inside to get a menu.

The wait was brief and shortly we were seated inside on the banquette against the back wall of the restaurant’s single small room. The space is quite inviting, there is a large communal table filled with zen flower arrangements in the center. 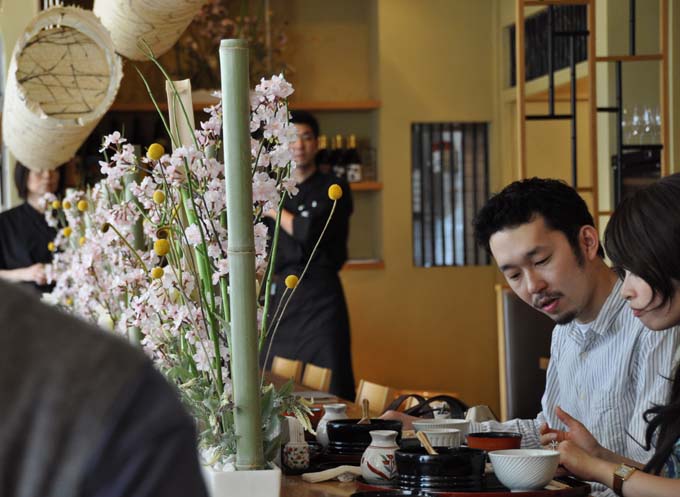 We ordered a salad with grilled eel on top and the mid-range set meal which came with eel in “sweet” sauce, rice, miso soup, pickled vegetables, and some other unidentifiable (to us) edibles. The eel on both dishes was amazing; delicate in both flavor and texture. While I very much enjoyed the salad I would have been happy to have my own set meal so I could have more of the unagi. Lunch for two, including beer was 4800 yen. 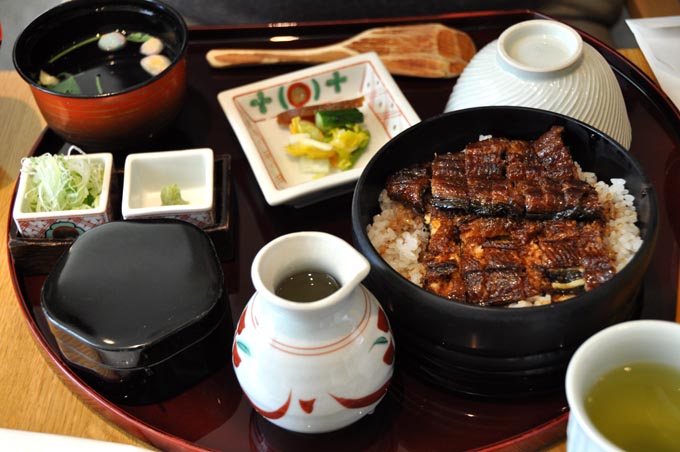 Afterward, I stood at the window which looks into the kitchen from the hallway outside, watching the one of the cooks work the charcoal grill. He saw me with my camera and was nice enough to hold up the skewered eel for me after he had dipped it in the giant vat of sauce next to the fire. 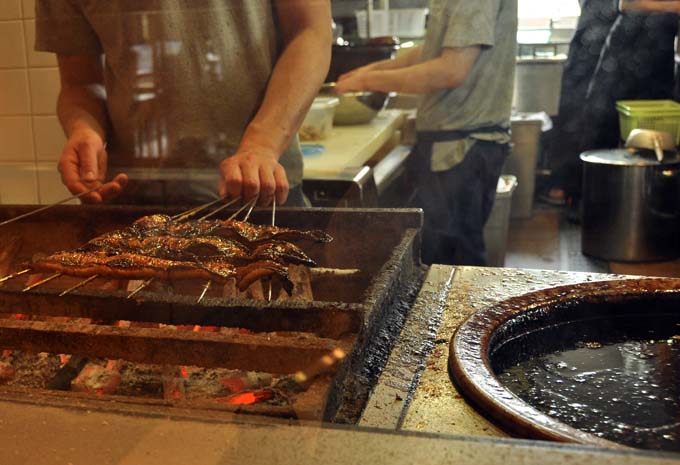 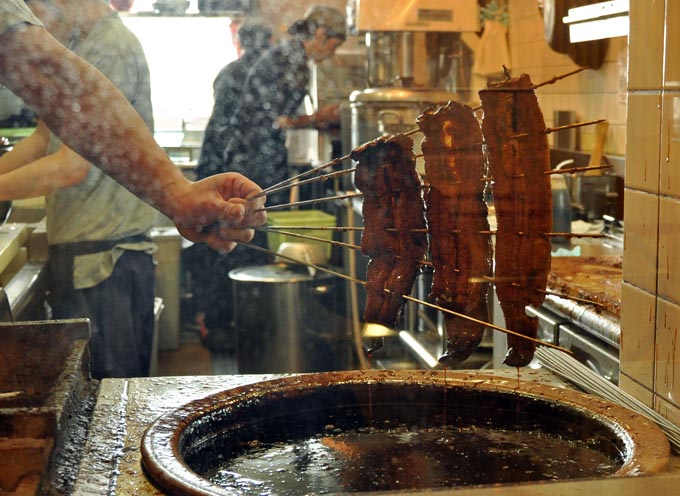 *Note about finding the restaurant; it is on the 12th floor of the Ginza branch of the Tokyu Hands department store, but we didn’t know this, we only had an address.  After our ½ day tour dropped us in the center of the Ginza neighborhood, we decided to have lunch there before going anywhere else. I had some places in my notes, but no way to find them on the map.

We turned on the Mifi and I went to www.bento.com where I searched for Hitumabushi from my notes and used the GPS function on the bento.com site to help us find it. It took a bit of trial and error, but eventually we found ourselves in front of Ginza Tokyu Hands store. This is a very cool store by the way, and warrants a bit of extra time to peruse everything from nifty kitchen gear, to art supplies, to clothing.

Our plan for dinner was to have Yakatori in an area near Shinjuku station affectionately nicknamed “piss alley.” This is actually two narrow streets packed with teeny-tiny hole-in-the-wall places. After peeking inside most of them, we finally picked one and sat down. Then we realized we didn’t have nearly enough cash on us and left to find an ATM. Unfortunately this became one of those travel experiences that can happen on any trip; the ridiculous walking in circles trying to find a machine which would take our card and give us cash. At some point it became comical and then it just became frustrating.

Inside Shinjuku station, there were ATMs, but none of the open ones worked for us. When there is usually a convenience store on every corner, tonight we could not find one 7-11 to save our lives. Finally, we gave up, looked at my notes, and decided to go to a tempura place we thought would take credit cards.

But the travel Gods were not done toying with us yet. Somehow we managed to get ourselves all turned around and lost trying to find this new place.  By now we were getting hungry and cranky with each other (as in “do you even have a clue where we are going?) when a nice man on the street offered help and pointed us in the right direction.

Along the way we found a Citibank ATM and got some cash then wandered more in search of restaurant. Addresses are pretty much useless unless you have a clue as to how they work (and we really did not, even with all I’d read about them). Street signs in English are difficult to find at times.

Right as I said, “we’re never going to find this place unless we happen to see a sign with the name on it in English” there it was, literally right next to where we were standing. 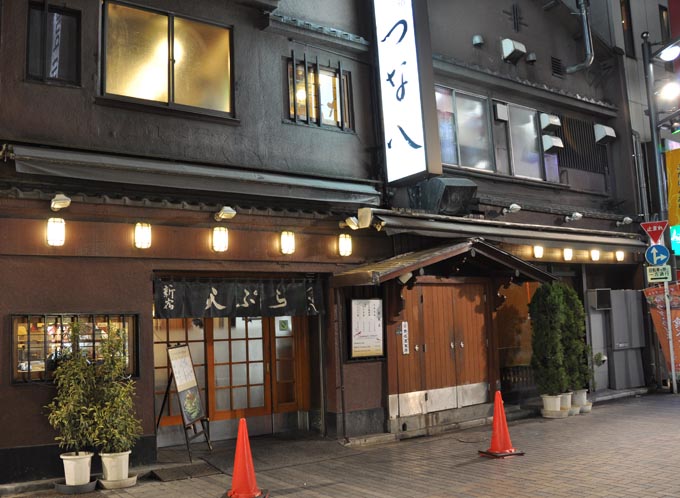 Upon entering the main branch of Tsunahachi in Shinjuku, you are greeted politely and asked if you want to sit in the smoking or non-smoking section. The restaurant has two floors, both with an identical layout of long counter, regular tables and a tatami mat room with low tables. The non-smoking section is upstairs and we were led to two seats at the counter, right next to the tatami mat room and where we could watch the two men behind the counter cook. The waitresses place a linen napkin over your coat on the back of your chair to keep the smell of the fryer off it which was a nice touch. 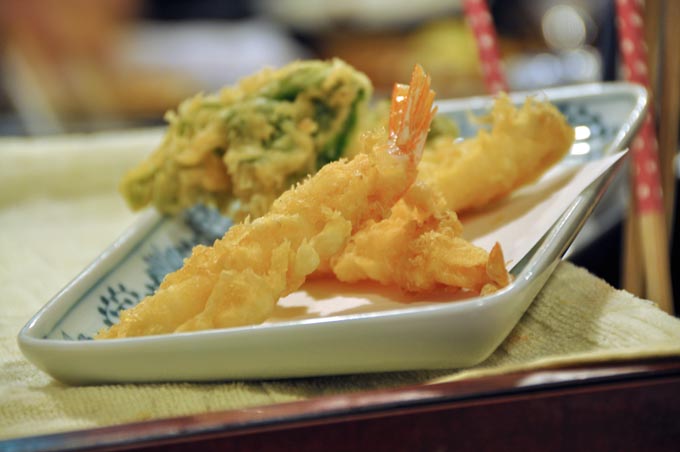 The menu is extensive and after the trials and tribulations of getting there we took the easy way out and each got a “set” which included large shrimp, squid, small shrimp, various vegetables and miso soup. Watching the cooks was a fascinating lesson in economy of motion. They are clearly professionals. The tempura was light and greaseless; absolutely sublime. The vegetables were perfectly cooked. The shrimp were so fresh they were still moving when they were cut and prepped for the batter. Our bowl of miso soup include thumbnail sized clams in the bottom. After a slightly frustrating start to the evening, we ended it very satisfied. Dinner for two, including beer was 5290 yen. 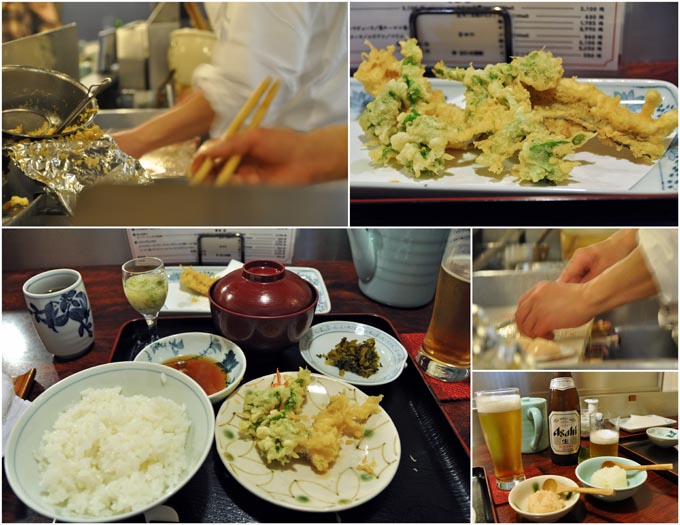 http://www.tunahachi.co.jp/en/index.html (note that is the correct spelling of the web site, even though the name of the restaurant has an “s” in it.

They have 6 branches in Tokyo and the one we went to was the original.
3-31-8 Shinjuku, Shinjuku-ku.
We later learned there is one in “Hiltopia” the mall beneath the hotel we were staying in, the Tokyo Hilton.

Half Day Tour of Tokyo-Can We Learn to Love the Bus and Follow the Leader?