Taking the Bullet Train from Tokyo to Kyoto

Our reservation is on the 8am Shinkansen train from Tokyo station to Kyoto and it’s raining. Hard. On a nice day, without luggage, it’s about a 10 minute walk from the Tokyo Hilton to the Shinjuku station where we could have used our JR passes on a JR rail commuter train to connect to the Tokyo station. But today, the thought of fighting the crowd against the tide in the rain, with luggage, is just too much.

Fortunately, the Nishi-Shinjuku subway station is connected to the hotel by an underground walkway. From there, we can take the subway to Tokyo station and connect with the Shinkansen. We allow ourselves about an hour to get from the Hilton to Tokyo station and  make it with only a few minutes to spare,  just enough time to buy a couple of chocolate croissants at a French bakery in the station, but not enough time to buy coffee.

For the experience of riding the Shinkansen train, see my Japan Tips and Observations post. The train is incredibly fast and the countryside whirrs by us at breakneck speed. Views from the train are a mix of farmland, small towns and light industry. Many of the houses in the smaller villages look very close together, almost like townhouses, but I also notice what looks like a lot of community garden spaces.

On arrival to Kyoto station, we take the hotel shuttle bus to the Westin Miyako Hotel. My full review of the hotel to come in the next post.

After getting settled in our room, it’s time for lunch and we take the hotel’s shuttle bus to the Gion stop. We wander around a bit, taking in the sights of the old town and trying to find a tofu restaurant I’d read about. We finally find it, only to discover it closed.

We walk around some more and then we accept a hand-out for a restaurant from a young man on Shijo-dori (don’t ask me why because normally we would never do this) . The yellow sheet of paper is mostly in Japanese (which we don’t read) but also has some English on it, advertising set lunches. He leads us down an impossibly narrow alleyway to the back of the building, around a corner and into a teeny-tiny restaurant, which has 4 tables and 5 counter seats. We sit at the counter and order a lunch special set which includes both tempura and sashimi, miso soup, rice (David gets the extra special red rice). This is definitely a “mom and pop” place and I think their son was the kid on the street, but the food was very fresh and nicely presented and prepared. Lunch, with tea, was about 1575 yen per person. 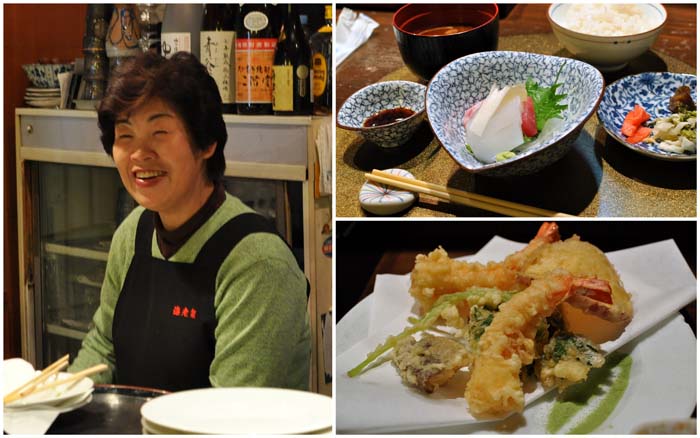 They had no cards so I have no idea of the name of this place or how to explain how to find it. Now I can see that it’s not surprising that they had someone handing out fliers on the street. Below are photos in case you’d like to try and find it.

Objects on the map may be farther than they appear

After lunch we look at the map and decide to walk toward Nijo Castle. There are some interesting old buildings with varying architectural styles near the river and when we try and take a short cut, we get sidetracked by a long covered shopping arcade (which we later figured out crosses the food market street). There are all sorts of cool shops to explore here and also little temples, squeezed in between clothing stores and food shops. By the time we exit it, the weather had started to turn cold, windy and rainy.

We push on, mini umbrellas bending backwards with the force of the wind, but finally abandon the task when we realized that objects on the map may be farther than they appear. What looked like a few blocks turned out to be more than a dozen more to go (after stopping and asking someone) and in the end, we hop on the subway back to the hotel where we arrive in time for a short nap and then a visit to the Club Lounge for cocktail hour. 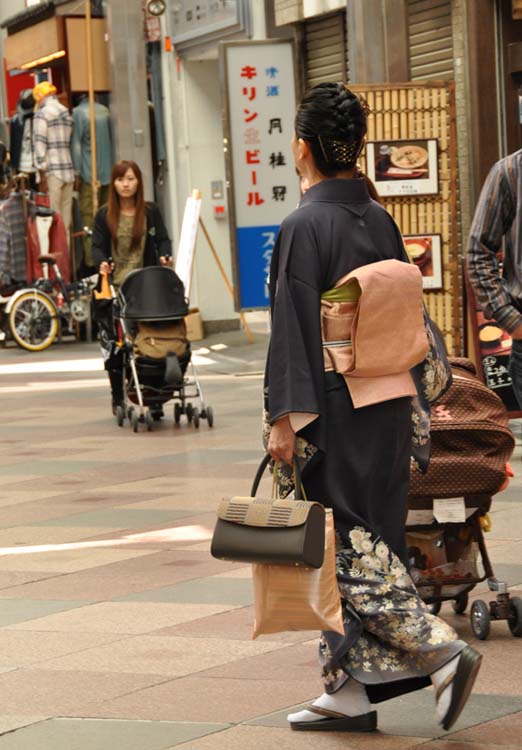 There is free wifi in the lounge, and I use the time to investigate our dinner offerings. We wanted to try Okonomiyaki, a sort of Japanese savory pancake/pizza cooked on a flat top griddle. By chance, I’d come across the mention of a place which was supposed to be near the hotel. After more googling, I was able to pin it down, and we walked about 3 blocks downhill from the hotel to find Okonomiyaki Kiraku, at the corner of Sanjo Street and Okazakimichi St. They are open for both lunch and dinner (until midnight), closed on Mondays.

The restaurant is small, 8 seats at a counter and 4 tables, but the waitress and the guys cooking behind the griddle were friendly, generous, and patient with our attempts to order. They have an English menu which was greatly appreciated, yet I think we were the only tourists in there at the time. This place  has figured out how to handle the big hotel down the street for those travelers willing to forgo the hotel restaurants in search of something different, yet maintain its own local flavor. 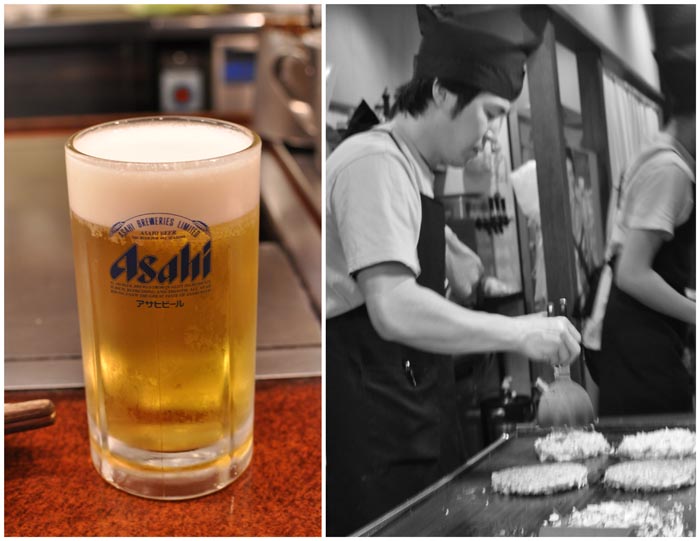 For our first experiences eating Okonomiyaki, I was very happy to have them cook it for me, but I understand that some places they give you the ingredients and you make it yourself.

We each ordered a “single”, mine with pork, shrimp and squid, and David’s with pork and shrimp. I also ordered some eggplant, which turned out to be two short Japanese eggplant, sliced in half and cooked on the griddle with some soy sauce and topped with shaved bonito. They arrived soft and perfectly cooked to the center, a little sweet from the caramelized soy sauce and nicely balanced with the saltiness of the shaved bonito. 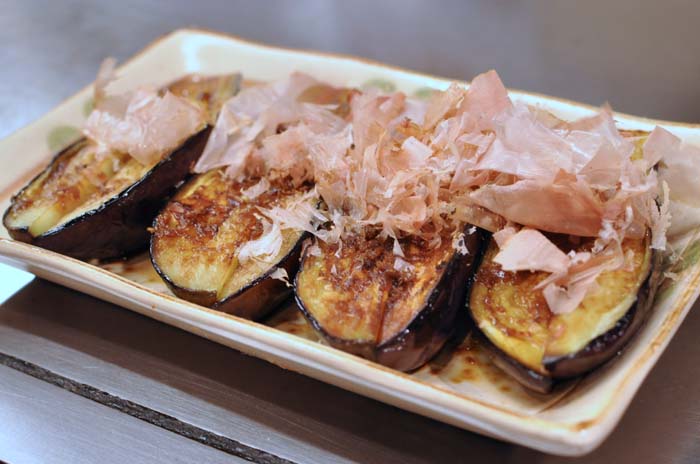 Then came the Okonomiyaki, served up on the griddle in front of us to stay warm, and with a squeeze bottles of sauce (sweet soy and a mayo) to put over it. It was surprisingly filling and I can’t imagine eating a large one.

Watching the guys cook was fun; they weighed and measured everything before  putting it on the grill. We watched as they made another dish, like a very thin crepe, covered with about 2 cups of sliced green onions or small leeks, and when they cooked down, covered with another crepe. This was served up to the guy at the counter next to us, who offered us a taste of his meal (it was excellent) and the line cook pointed out what it was on the menu (some sort of vegetarian dish).  Along with 2 beers, 2 Okonomiyaki and the eggplant, dinner was about 3000 yen. 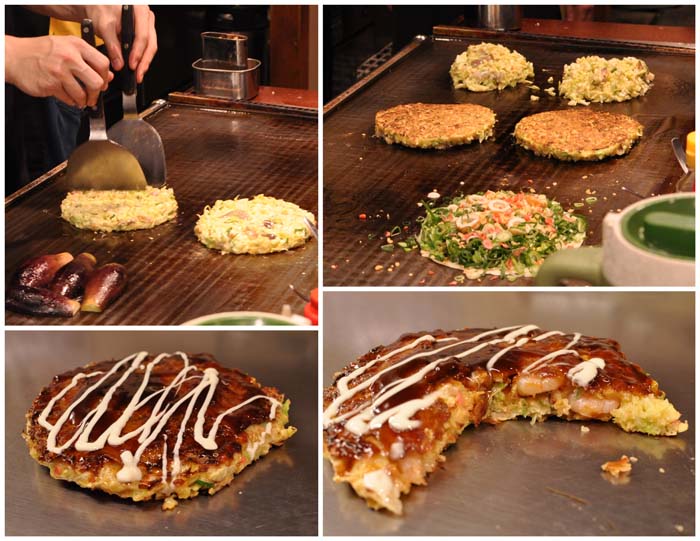 Like food and travel? Want more? Make sure you check out the Wanderfood Wednesdays round up.

A Visit to Senso-ji Temple in Tokyo