Our trip back to Tokyo from Kyoto was easy and quick. We bought bento boxes in the station for lunch on the 10 am train and had an uneventful and fast ride back to Tokyo. 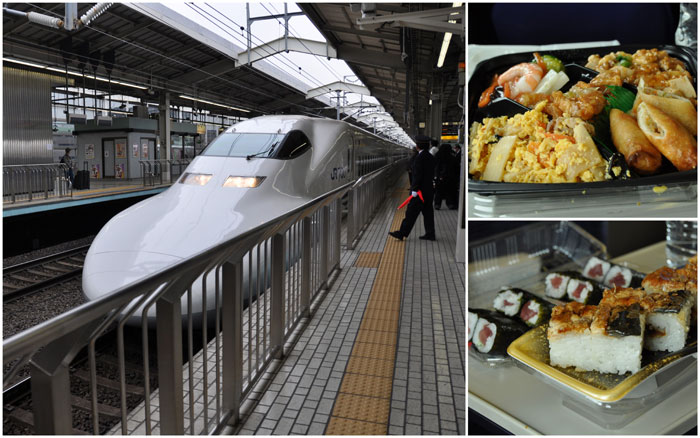 When we arrived back at the Hilton around 1:15, our room was not ready. This was especially frustrating because clearly the hotel was not even close to full. We waited at the nearby Starbucks until 2pm. The room was essentially the same as the one we’d had earlier in the week, also on the 25th floor. We were told we had been “upgraded to deluxe” but both of us felt this was a stretch. Show me the “deluxe” I say.

Our plan for dinner was to find a noodle place I had in my notes. The address was not much more than the name of a building and a vague description of a place which is known for its hand made udon noodles. By looking up the building, I found the street and an approximate location on a map, about three blocks north of Shinjuku station. We set to find the place, but have a really difficult time.

Finally, we find what we think is the building, and yes, there’s a noodle place, crowded and with a ticket machine as described. There is no English in the signage, no English on the menu and essentially no English spoken. Inside, there is one U shaped counter with two tiny tables in back. 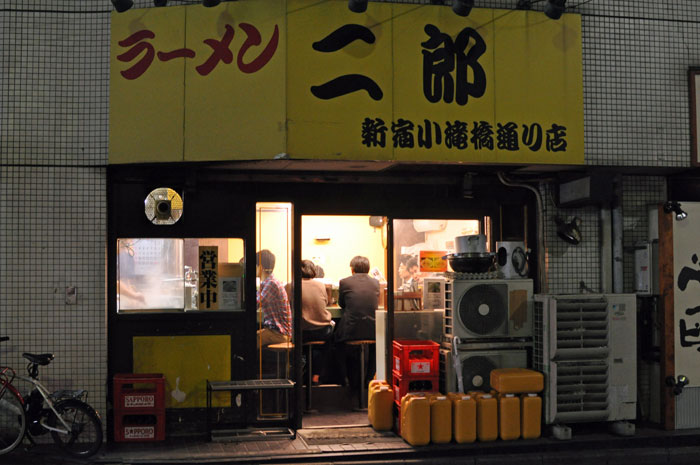 We stand outside and hesitate for a while, but it’s clearly popular (there was a wait for seats) and it smells incredible, so we venture in. This is the type of place where one pays and orders from a ticket machine and gives a ticket to the guy behind the counter. Unfortunately, there were no photos on the buttons, only Japanese characters, so we have no idea what to order. After a few minutes, the guy cooking the noodles comes out from the back and pantomimes with a few words in English “noodles/soup”, “noodles (separate from) soup” and “small, medium, large” on the buttons. There were a few other options probably involving the amount of garnish put on top, but we just pick two buttons and order. 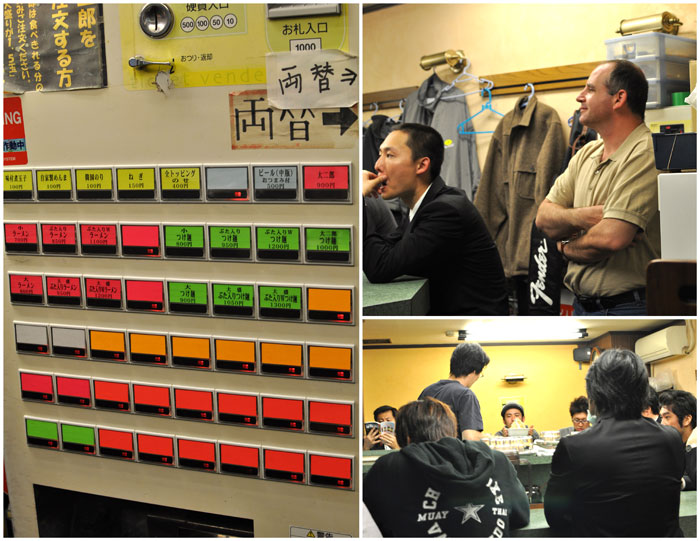 I get the smallest “noodle/soup” option for 700 yen and David gets the largest for 1100 yen. They ask if we wanted garlic and we say yes. This turns out to be a heaping spoonful of raw (maybe blanched) roughly chopped garlic put on top of the steaming bowl of soup before it is presented. 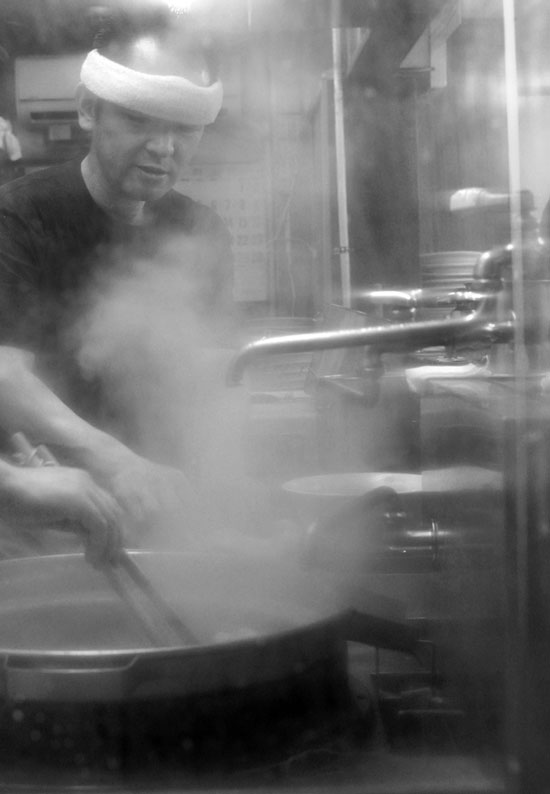 We finally get two seats at the counter and have the opportunity to sit and observe a bit while we wait for our food. Most of the clientele are men and they are dining alone. They sell beer here, yet no one is drinking it. Instead, everyone is drinking iced tap water placed in jugs on the counter so we do the same. When people finish eating, they put their bowl up on the counter with their glass, and then wipe down the counter in front of them with a damp towel provided at each place before departing.

There’s a refrigerator out in the dining area of the restaurant and through its glass doors I can see big bags of pork fat. I take this to be a good sign of things to come. The noodle cook puts out six bowls at a time and that’s when the last six people who have ordered get their food. The place is fairly quiet except for the sound of slurping.

When our noodles finally arrive, and I remember thinking “hmmm…these don’t really seem like udon.” And as it turns out, they weren’t udon, but instead were a fairly thick ramen, but we would not figure out where we were until much later. It’s funny how our expectations can be so strong that they can color our actual experience. We just assumed we were in the right place because all the clues matched. At the time, neither one of us said “Hey, wait a minute, this isn’t udon!” We were too busy slurping to give it much thought. 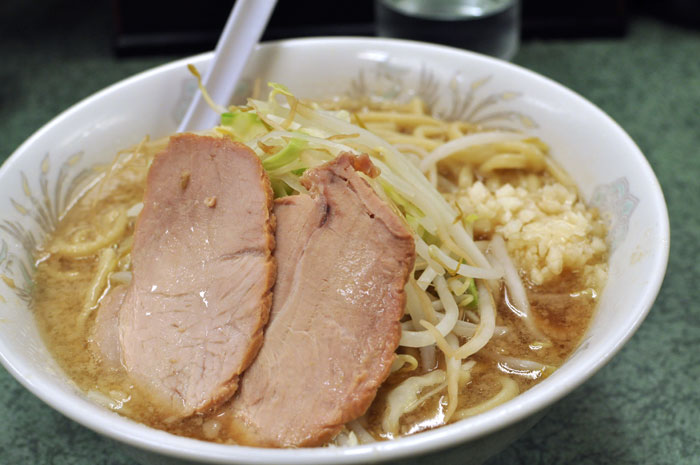 Both of our bowls were the exact same size except that mine had 2 slices of pork and David’s had about 8 slices (yes, he shared some with me; that’s love, man). We saw much larger bowls go out, some with towering heaps of bean sprouts and shredded cabbage on top (perhaps this was the second row of buttons on the ticket machine?). What we had was just fine for us. The broth was so rich and flavorful and the noodles were chewy but not too thick. 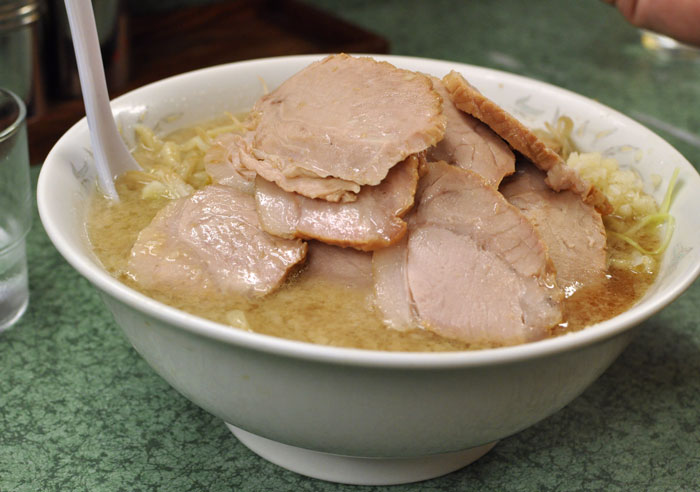 When it came time to write this post, I looked up the name of the place I thought we’d eaten at, and discovered that we had actually eaten some place else totaly different. With the power of twitter and a photo of the front of the restaurant (above) I was able to discover that we’d eaten at one of the most famous ramen chains in Tokyo called Ramen Jiro. In fact, this place has almost a cult like following with as many fans as haters. To read more about Ramen Jiro, check out this post on ramentokyo.com.

In the end, while it’s hilarious to realize we thought we’d eaten some place else all this time, it turns out to be a bit of travel serendipity instead; a delicious happy accident.

Tokyo's Ameyoko Market and Yakitori with the Local Crew