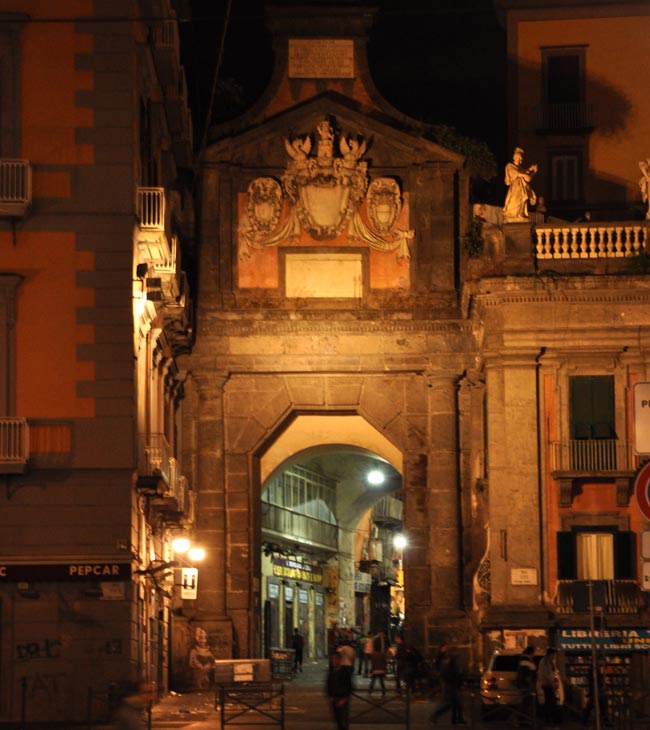 In my last post I explained how going to a new city for the first time is a little like going on a first date. While I had my concerns about Naples, I’m happy to say we got along just fine.  I didn’t exactly fall in love like I did with Rome (there’s nothing like your first love, is there?), I think we could certainly hang out and get to know each other better. In other words, I would love to return for another visit, this one was way too short.

In the way that Rome can be sophisticated, cosmopolitan, and romantic, Naples can be brash, loud, and bold, but also sweet. Everything seems larger than life in Naples; clothes are tighter, brighter and more bedazzled, makeup is bolder and hair is bigger. But the sweet is there too, literally, with pastry shops around every corner, and figuratively, with people who seem genuinely concerned that you enjoy their city. In short, if Rome is like New York, then Naples is like New Jersey. This is not a put-down in any way, but rather an observation that like the rest of Italy, and the US for that matter, there are big differences between the various regions of the country and that’s what gives each place its unique character. 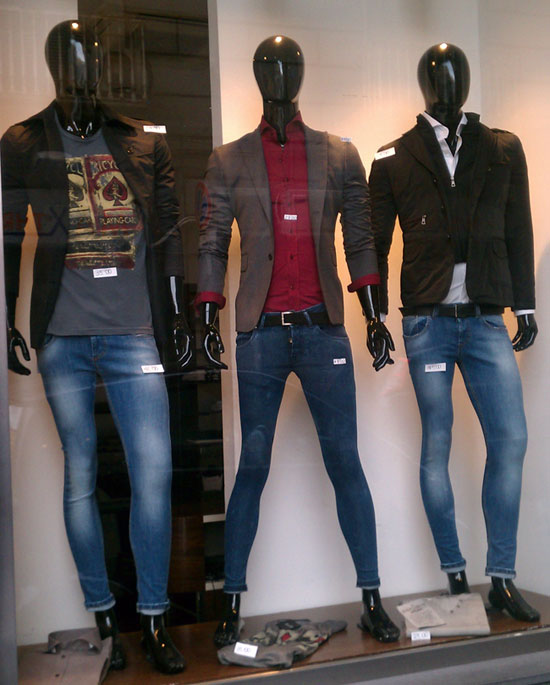 We did a lot of walking throughout the city and never felt unsafe even though people had warned us that Naples was dangerous and dirty. Like any large city, you need to be aware of your surroundings and we were.

I had a long list of places I wanted to see and while we hit quite a few, we also spent one day out of the city at Herculaneum which gave us only two full days in Naples itself. We made a conscious decision not to over-d0 it and force ourselves to see every museum and church. In the end, we still managed to see a lot, most of it just while strolling around, soaking up the atmosphere.

Below are some of the highlights from within Naples. The experiences in restaurants, markets, and the day in Herculaneum will be covered in later posts. For the record, this trip was taken in early October 2011, and my travel companion was my mother who had already been traveling in Italy for 2 weeks on her own before we met at the Rome train station and went directly to Naples.

On our first full day in Naples, a Sunday, we set out on foot from Piazza Dante, walking down Via Toledo, to just wander the streets with no particular destination in mind. There were lots of people in the streets even though most of the stores were closed and the street closed to most traffic. We ended up in Piazza Plebiscito which was filled with people attending a “Race for the Cure” event. This was very cool to see, and we were impressed with the sheer number of people in attendance, though not with the Black Eyed Peas wanna-be band.

Another highlight of the day was walking through the tiny streets of the Spanish Quarter, in search of a place to have lunch. I love the narrow, crowded streets filled with hanging laundry and whizzing motorbikes.

I’ve read that people in Naples live their lives in the streets because many people have tiny, one room apartments and this seemed to be true. We walked past many ground level apartments with open windows and doors, which at first glance may look like a tiny restaurant when you see the kitchen table. But upon closer inspection, you’ll often see a bed and the rest of what fits in a studio apartment.

People still use baskets and buckets attached to ropes to send things up and down to street level from their 3rd and 4th floor apartments. One of the “cool kids” below forgot his jacket and his mother yelled down to him, sending the jacket down via bucket. People also buy produce and other household items from street vendors this way.

The National Archaelogical Museum is a highlight of any trip to Naples and we made sure to check it out before our trip to Herculaneum. Inside are relics, mosaics and frescos from both Pompeii and Herculaneum as well as classical sculptures and an enormous stunning room covered in murals on the 2nd floor which at one time must have been a grand ballroom. The collection of glass and pottery vessels is vast.

The mosiacs, frescos and statues inside the secret room are very graphic, to the point where I can’t put them on the blog otherwise my husband would not be able to share this in his 4th grade classroom. Let’s just say there was all manner of artifacts to provide inspiration and ummm, luck, in the realm of fertility and sex, for both humans and animals, and sometimes, both of them together.

On another day we walked around the Centro Storico and what’s a visit to an Italian city without a visit to the Duomo? Of course we went in…

The exploring of Naples continued on foot, through many cool little alleyways and back streets, including one named Lemoncello street! 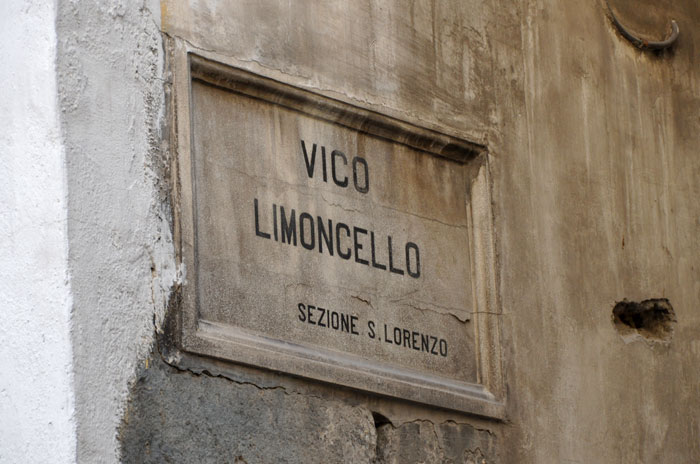 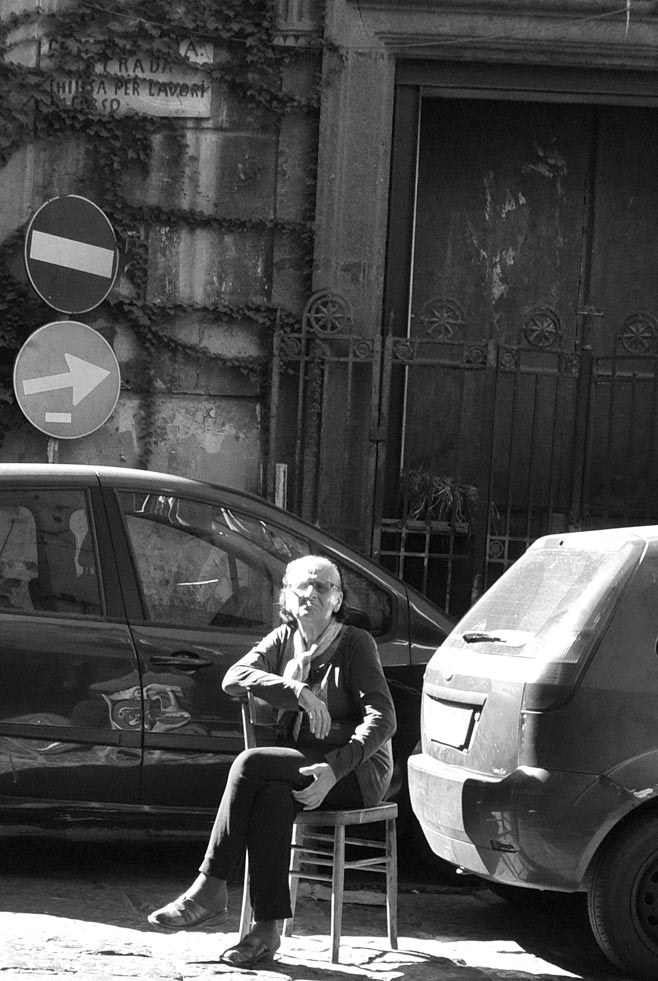 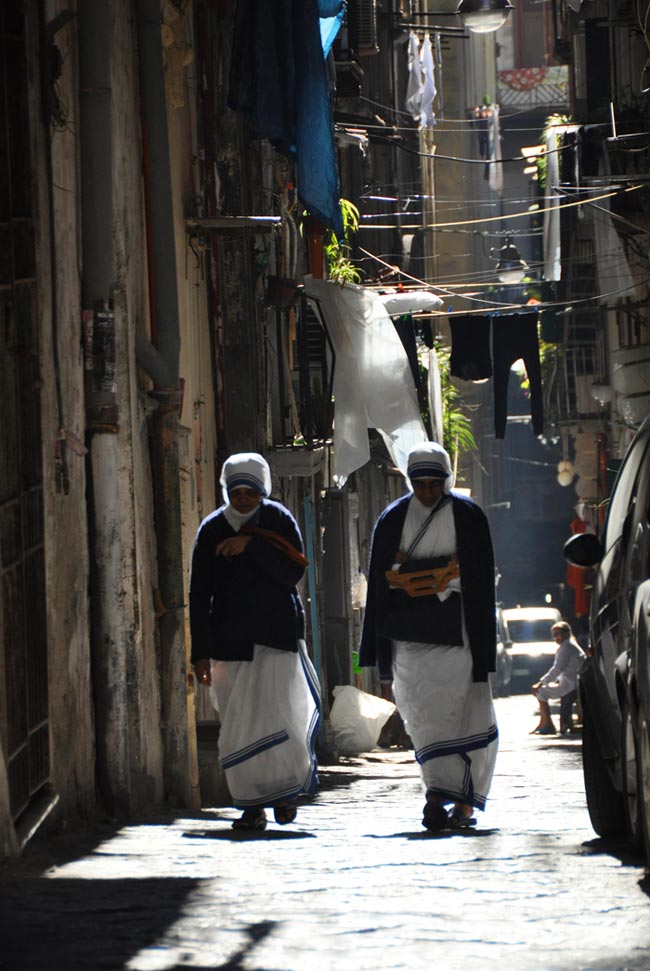 Naples has four funiculars and on our last afternoon, we took one up to the top of the hill to see the view and check out the Castel St Elmo. Little did we know it was a bit of a hike to get from the funicular to the castle’s entrance, only to discover it closed on that day!

Instead of walking all the way back to the funicular, I looked at the map and said, let’s follow this street downhill to get to the middle stop on the funicular. Big mistake. Huge.

The “street” wasn’t a street at all, but rather a series of wide and uneven “steps” in a switchback downhill. After about half an hour of walking, we started to wonder if we’d ever get out and when we did, where would we land? Finally we heard cars and the steps emptied out onto a busy street where we eventually found the middle funicular stop (turn left when exiting the steps). In the photos below, that’s me (top left), saying, “Can we just be done with this now?”

Stay tuned for more to come from Naples…