One of the best parts of hanging out in Istanbul is riding the ferries to get from one part of the city to another. Where else in the world can you go from one continent to another, still be in the same city, and not even need a passport? This is just one of the many things that make Istanbul so special.

There are many options for getting on the water in Istanbul. The first is to simply spend 2TL and get on one of the many daily commuter ferries which shuttle kids to school, the local population to and from work, and tourists to the various sights around the city. Think of it as a big bus on the water.

On one of our days in Istanbul, we took the ferry from Karakoy to Kadikoy to check out the food market there (this is the trip which took us from Europe to Asia in half an hour). We picked up the ferry on the Northeast side of the Galeta bridge and bought tickets from a machine at the dock. Along the way we were treated to excellent views of all of Istanbul including the distinctive domes and minarets of the Blue Mosque and Hagia Sofia in Sultanhamet.

The ferry makes one stop at Haydarpasa train station on the way over, but did not stop here on the return. If I were to do it again, I would have gotten off here to check out this old train station, the terminus for trains coming from Eastern Turkey and points farther East. From there I would have walked over to Kadikoy. We tried to walk over there along the waterfront after lunch in the market, but it’s not possible to get all the way there that way and we didn’t feel like walking out and around to get there. Next time.

On our last day in Istanbul, we took a tourist “Bosphorus cruise”. There are many options for this (detailed here) ranging from 2 hours to all day. We went with the shortest option, with Turyol Lines, timing our trip to coincide with sunset for better (photography) light. When we arrived at the departure point (next to the Galata Bridge, Sultanhamet side) there was a ferry about the leave so we opted to wait it out in order to be first in line for the next departure. While waiting, we looked at the ferry company’s sign which showed the route and schemed as to where the best place was to sit for optimal viewing.

We had a plan; go to the top level, back left, and this would put us on the shore side of the boat for the whole trip.

I’m sure you can guess what happened next. We finally got on the ferry, rushed up to the top back and proceeded to claim our spot. On the right. Sigh…we didn’t realize it until it was too late. Ultimately, we moved to spots along the bench running the length of the left side and all was fine.

The bottom deck of the ferry, below, was almost empty for most of the trip. It’s warm however, if you get too cold. Both levels have tea and snack service.

The trip itself was lovely, albeit a bit chilly and windy. Even though the day was sunny and warm, it’s much cooler out on the water. The views of the palaces, castles, houses along the shore, the bridges, and the lighthouse are spectacular and worth the trip. Next time I’d like to do the longer journey which takes you almost to the Black Sea. 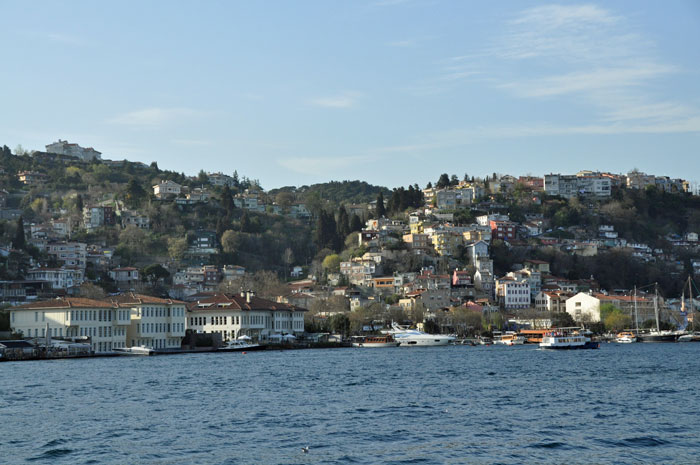 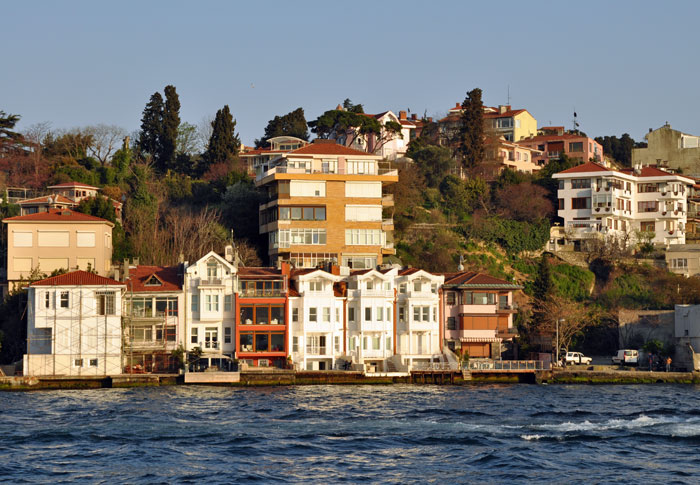 Below, Leander’s Tower, sits on a tiny island in the Bosphorus. Once a lighthouse, and quarantine center, it is now a restaurant and nightclub.

If you want more on the ferries of Istanbul, check out this wonderful multimedia slideshow by Photographer David Hagerman. Make sure you have the sound on while you watch.

The Other Side of Istanbul; Istiklal Caddesi, Galata Tower, Beyoglu