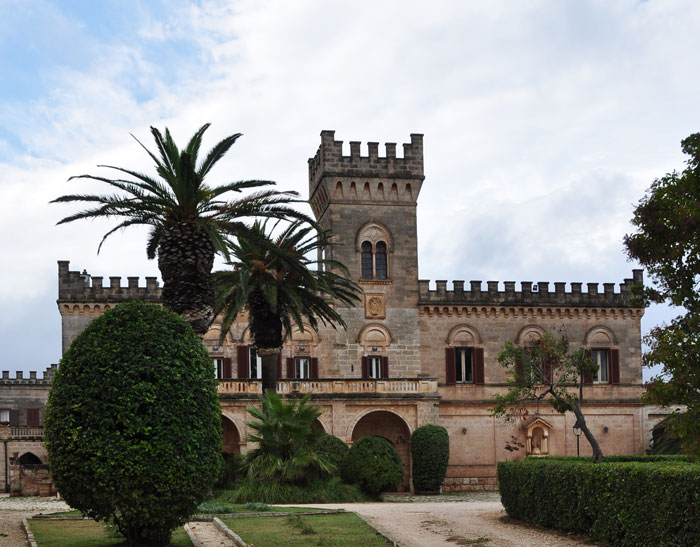 At first, driving up to the masseria feels a bit odd, as if you are driving down a private road (you are), through olive groves (you are), and then suddenly you see a what looks like a small castle in front of you, complete with tower and crenelations around the roof line. This property has been here since the 1600’s and is currently home to four generations of the Angelini family who live in a house adjacent to the main building.

Masseria Salamina sits in the middle of olive groves outside the one street town of Pezze di Greco on the SS16 south of Fasano in the Puglia region of Italy. A masseria is a fortified farm house and this one has been converted into an agritourismo as many in the area have. Agritourismi are a working farms (according to Italian law an agritourismo must make more money from farming than it does from tourism) which also offers lodging and often serve food from their own farm and those of the surrounding area. 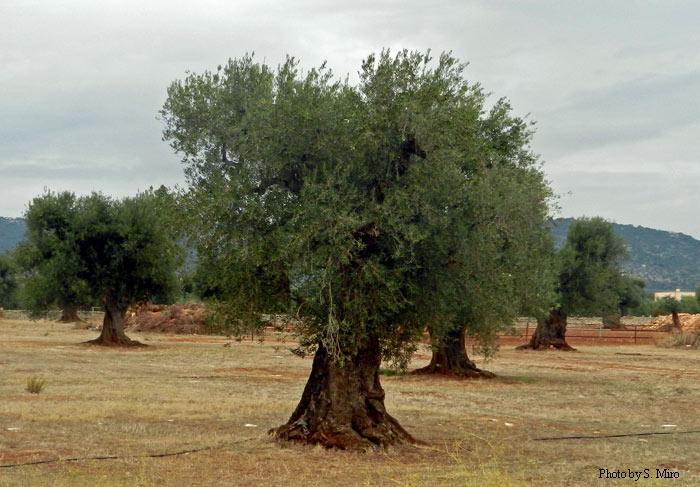 There are 20 guest rooms; those in the main building are called “manor rooms” and are filled with period antiques original to the house and some may have a view of the sea (and are priced to match), “mezzanine” rooms off the interior courtyard with two levels, and “farm house” rooms off the back of the building which are like small 1 bedroom apartments complete with kitchen.

I had originally booked a mezzanine room (the least expensive at 100 euro/night in low season) but we were shown to a farm house room when we arrived. Confused, and with a bit of a language barrier, we asked to see the 2 level room. As it turned out, the farm house room was nicer (same decor but larger) than the mezzanine room and we had been offered this room because they were not full. Of course we stuck with the nicer room. 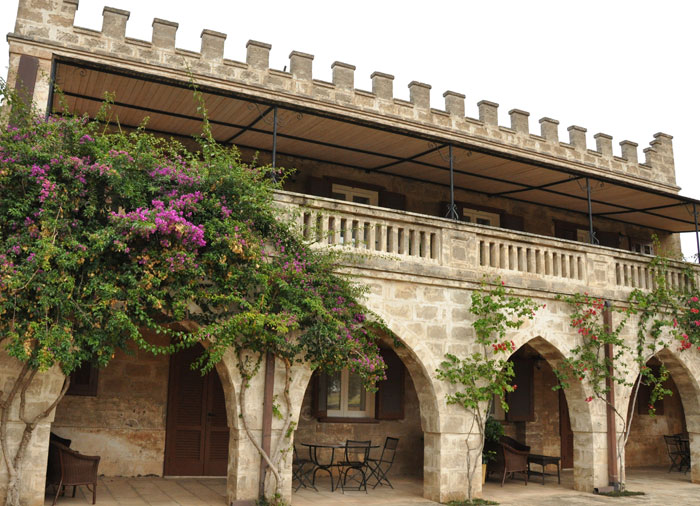 The little apartment was quite spacious for the two of us.  The room decoration seems stuck in the late eighties but it’s very comfortable with high ceilings in all rooms. We were on the second floor so we also had a nice veranda overlooking the olive groves and the kitchen gardens for the restaurant. In better weather we could have sat out there at the table and enjoyed a glass of wine in the evening.

The living room has a daybed plus trundle (good for kids!), table and chairs, and a TV we never watched. The bathroom is quite large, but only has a half size tub with shower. The bedroom is spacious with two closets and a big window. 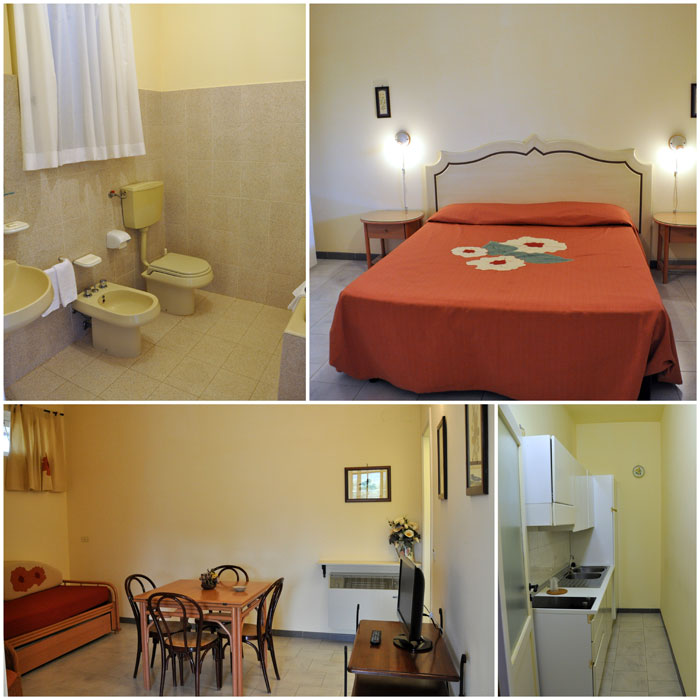 The narrow kitchen has no window, but is stocked with most of what you’d need to cook a meal (utensils, pots, pans, dishes). However, there were no cleaning supplies at all (sponge, soap) and the housekeeping never cleaned up in there. As we were checking out, we mentioned this to the owner and he told us when Italians rent a “self-catering” apartment, they expect to bring those things. These rooms are  usually rented for at least a week at a time, if not more. But he admitted that for 3 nights that did not make sense and that non-Italian guests might not understand. Their website now says that the rooms include daily cleaning “crockery excluded”. We’ve stayed in many rental apartments in Italy and there have always been some cleaning supplies in the kitchen. Now I at least know to ask. 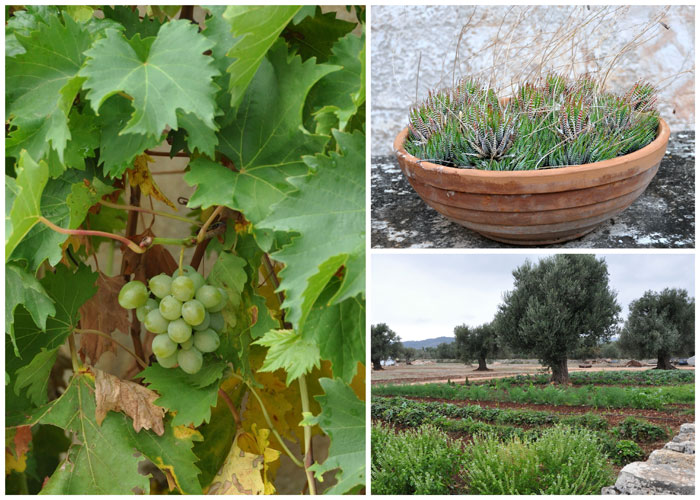 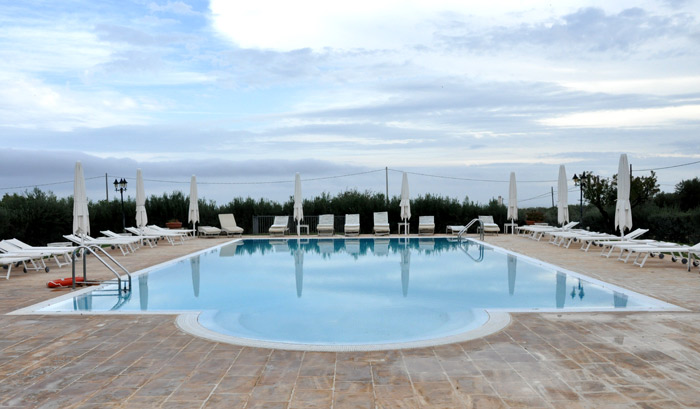 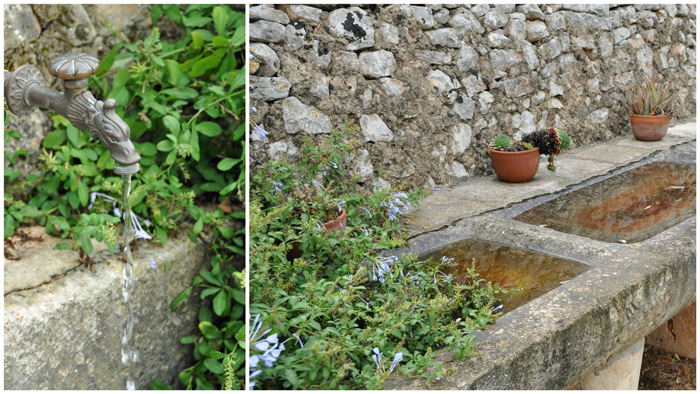 Strong, free wifi is available in the guest rooms and public areas. The public rooms in the main house are stunning and worth a visit. Frescoes on the walls of the stairway look to be original to the house and the ceiling of the main hall could belong in a church. Views from the balcony off the front of the main building go all the way to the sea. 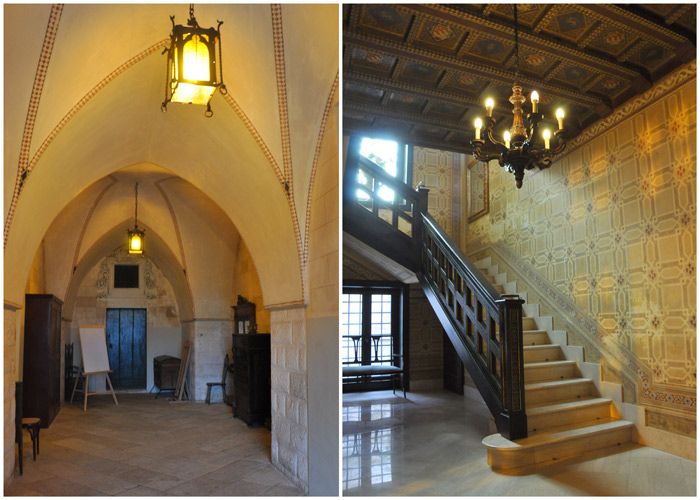 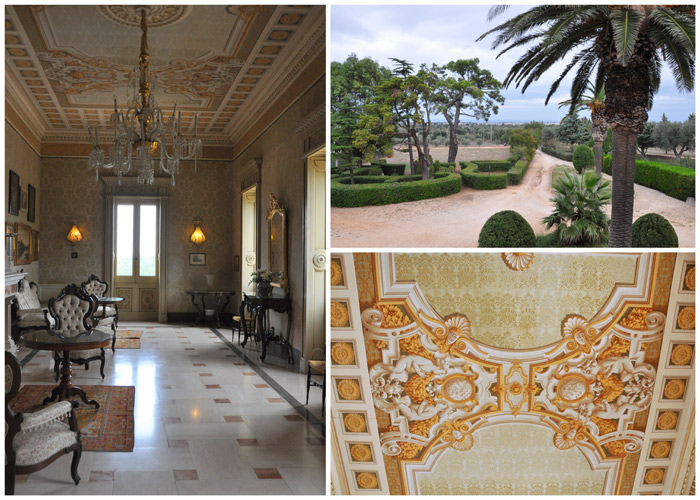 The food in the masseria’s restaurant was very, very good and we ended up eating dinner there every night. That wasn’t the plan; we could have gone out to local restaurants or other masseria in the area, but the food was good and the weather was poor so it just seemed to make sense to stay there. The dining room is in a building which was originally used for pressing olives and has a barrel vault ceiling at least 30 feet high. They offer a four course menu which changes nightly for 28 euro and most of the produce used in the kitchen comes from the gardens surrounding the hotel (even in October the tomatoes, peppers, basil and eggplant were still abundant).

We ate the full menu for two of the nights and one night, after a particularly large lunch, asked for items a la carte which was no problem (though there is not an a la carte menu with printed prices). I believe they serve dinner guests from outside the hotel if you make a reservation and they ask guests to let them know by mid day if they will be dining with them in the evening (the next day’s menu us available the night before). Breakfast was included in the room rate and was a buffet selection of yogurt, breads, pastries (both savory and sweet), cheese (oh, the fresh ricotta…), cured meats, fruit, etc. Of course, there was delicious cappuccino, cafe, and tea. Even the jams were made there. 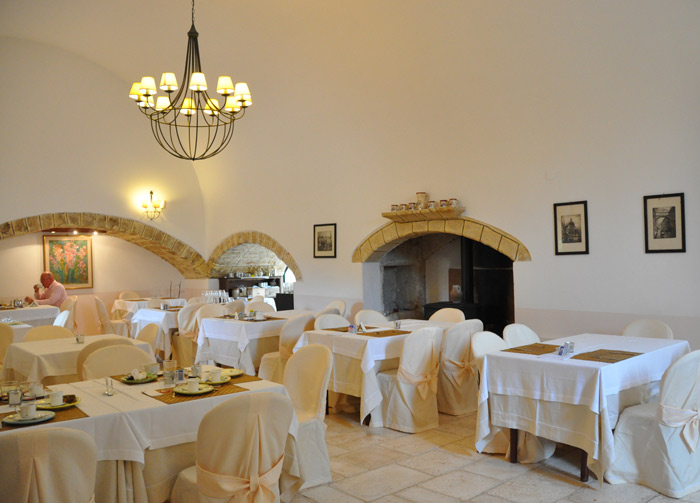 On the first night the menu included a multi plate antipasti which included the traditional puree of fava beans and sauteed chicory, a smoked capocollo, eggplant parmesan and miniature pizzas. The pasta was a trofie with “green sauce from the garden”, the main course was veal  wrapped around sausage with creamy eggplant and roasted potatoes and for dessert, a fruit tart. We ordered a lovely bottle of wine (SUD Malvasia Nera Salento Vino di San Marzano) for only 15 euro a bottle (we drank half and then took the rest to the room).

On our second night, I only ordered the antipasti course which included “duchess” zucchini, roasted peppers with capers, panzerottini, and rolls with ricotta and zucchini flowers. For out last meal we had wedges of fresh young soft peccorino, zucchini “poverella”, pizza rustica, and eggplant with mushrooms for the antipasti. The pasta course was strascinate with sun dried tomatoes and olives and for the main, lamb baked with salad. I think the kitchen shined the most with the antipasti and the pasta courses. The meats of the main course tended to be overcooked and the desserts were not really special.

If I were to stay again (and I would for sure) I would still eat there, though maybe not for every meal. Every night at dinner we got to chat with Filippo (the owner/manager of the masseria) who explained the food (where the cheese came from (local), where the smoked capocollo was made (again local, in a cave), and the different wines. On the last night we had a long discussion local liqueurs (he let us taste a few including the nocino that his mother makes every year) and my mother promised to send him her recipe for making bay leaf liqueur. 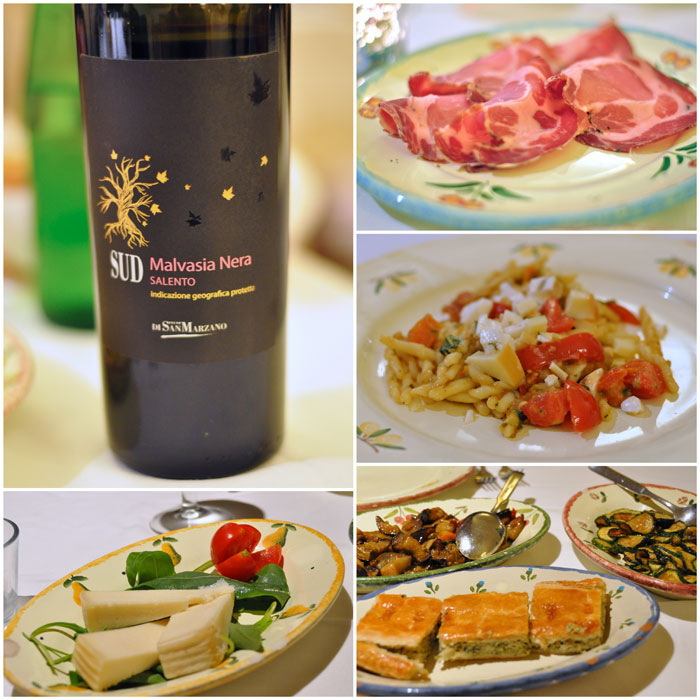 We never had the opportunity to do anything other than drive through the town of Pezze di Greco. Every time we were in the area we were either on our way somewhere or it was mid afternoon when there was literally nothing open. If you plan on staying at the masseria, you will most likely need a car as there’s nothing within walking distance.

If you need a grocery store while there, we did find one open in mid afternoon when everything else was closed and we’d missed lunch (there are other grocery stores, but even the big ones close mid afternoon). It was raining buckets, and thought we’d buy some canned soup to heat up in the room. The store is on the SS16 road toward Fasano, on the right, just as you enter town. They have a tavolo caldo at the entrance, a nice bakery and lots of choice for salami and cheeses plus the usual grocery items. Except soup. But who knew it did not exist in Italy (or at least not in this store)? We found exactly three soups, all by the same manufacture, in foil pouches, hidden among the canned vegetables. We got barley vegetable and it was decent, along with some fresh baked rolls and salami.

Last but not least, my favorite part of the masseria might have been a five month old tortoise shell cat named Julietta. She was one of the sweetest cats I’ve ever met and I wish I could have packed her in my suitcase and taken her home. If you see here there, make sure you give her a scratch and a cuddle from me. 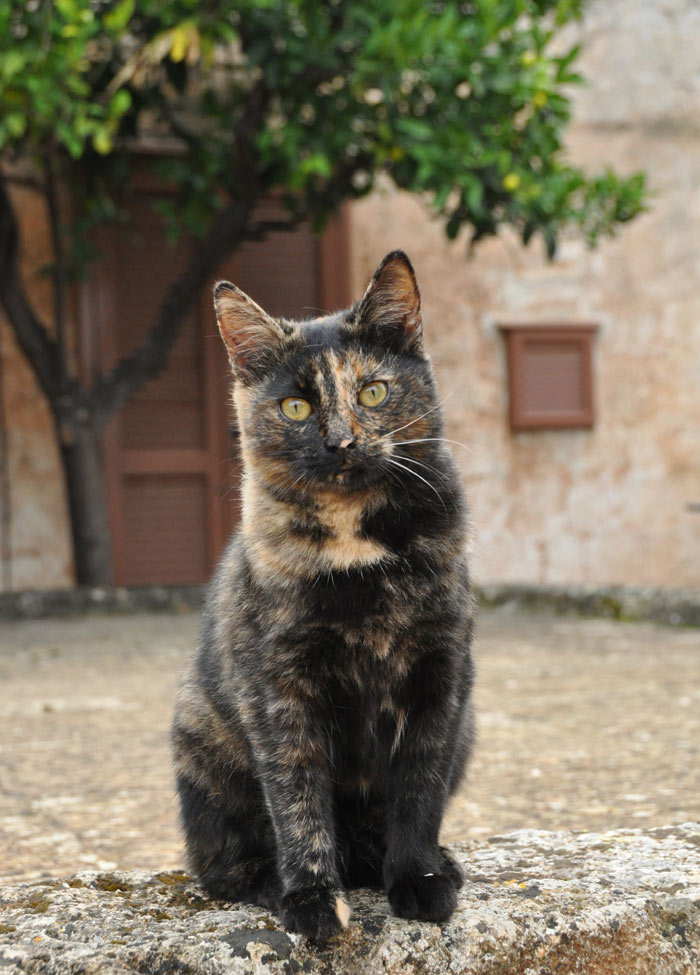 Disclaimer: Nothing in this post or any of the others from this trip was sponsored, paid for, or provided for by anyone other than me or my mother. If I mention a company, hotel or restaurant, it’s because I think it’s worth sharing, good or bad, and my opinions won’t be colored by third party influence.