In Italy, Sunday is traditionally a big day for families to go out to eat for lunch. At 1:30pm, the tiny dining room of Il Cortiletto, which has only five or six tables, is already full. On the covered patio out back we’re offered our choice of tables with only other table occupied. Within twenty minutes it’s almost full so clearly Sunday lunch is a late event in these parts.

The patio has white washed stucco walls and is mostly covered by an arched solid roof so we’re protected once a warm rain starts. Plates are chipped in an unapologetic, shabby-chic kind of way, but nice glasses are used with good bottles of wine. The staff appears to be mostly in their 20’s and 30’s, and the young chef appears a couple of times to speak with the obvious regulars; he in chef’s coat, bushy hipster beard, and baggy chefs pants with a loud print the kind of which I have not seen since I was a chef the late 90’s. The servers, all female, are dressed in jeans and deftly juggle armloads of dishes while trying not to slip on wet pavement between the covered patio and the kitchen’s open back door.

While we don’t really know what to expect with the food, it turns out to be a refreshing take on the regional cuisine, using local organic produce with updated plate presentations from the more traditional fare we encounter later in the trip. 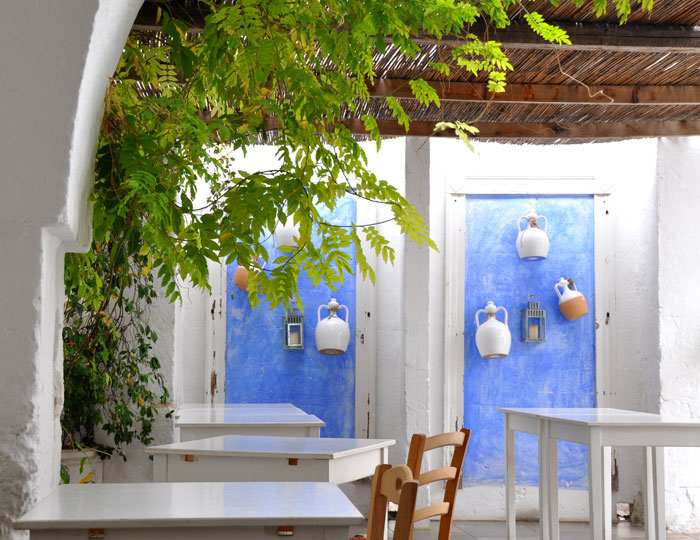 A small bowl of warm fried olives arrives at the table before our order is even taken. I’d never eaten fried olives before in the Pugliese style (these are not battered or stuffed, just fried) and they have a very soft texture and more subtle flavor. This article from Zester explains a bit more about Puglian fried olives.

There’s no printed menu, only a couple of small blackboards with the day’s many choices written upon them. One of the servers, a lovely young woman, speaks enough English (combined with our culinary Italian) to explain our choices. We choose three courses to share and it’s difficult to decide because everything sounds so good. Later, we notice almost every table sharing several courses. We also order a couple of glasses of rose because it just sounds perfect for this humid day. 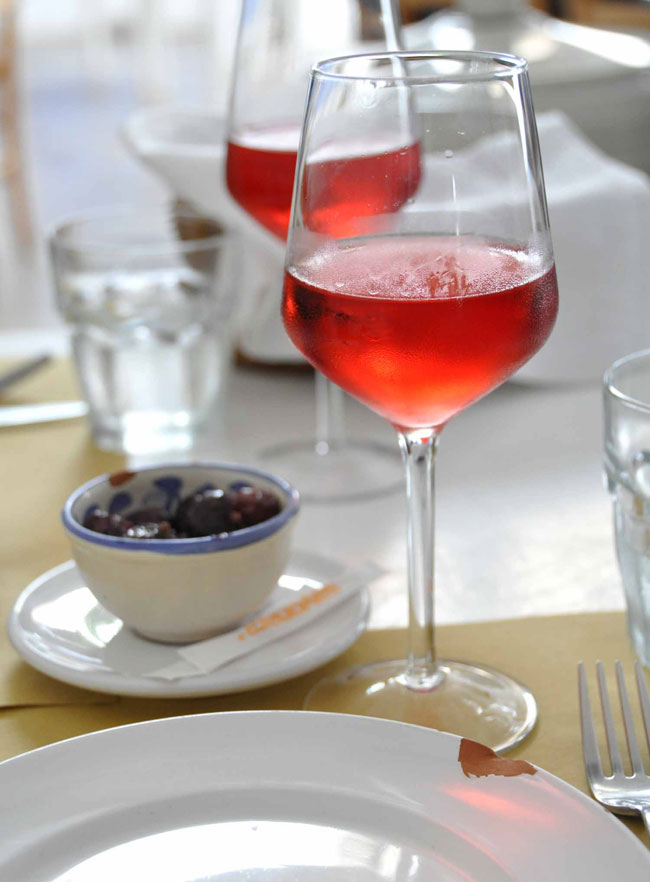 The first course, a mixed antipasti, arrives on two plates. The first is a large platter filled with lots of little bites, much more composed in style than we would see on any meal in the rest of Puglia. It’s beautiful and has local burrata drizzled with olive oil, pecorino cheese with honey and fig, a few slices of coppa, roasted peppers, stuffed eggplant, zucchini, frittata, asparagus wrapped with proscuitto, and little fried balls of something I cannot remember. On a separate plate there’s a savory pumpkin souffle with pesto which is warm and delicious. 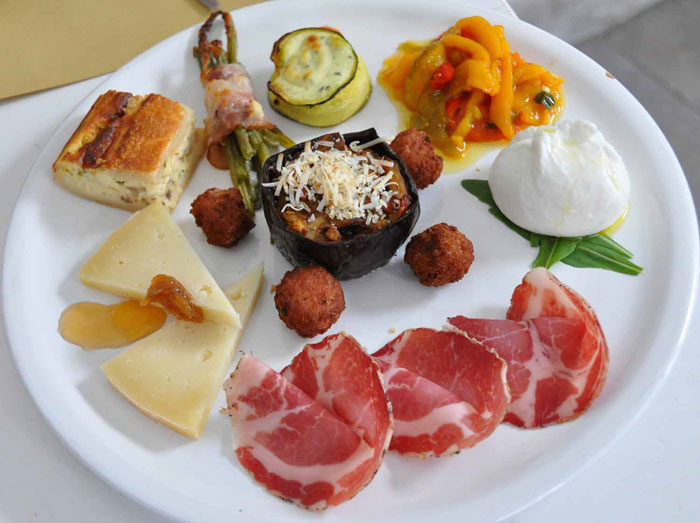 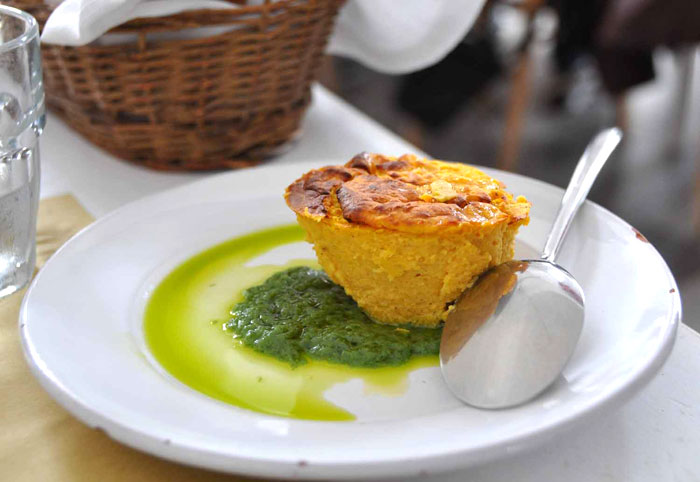 Between the antipasta and pasta courses we’re served a small plate of ice cold wedges of raw fennel. I’ve never seen it served this way before, but assume it’s a palate cleanser or digestive aid since fennel is considered so good for digestion. 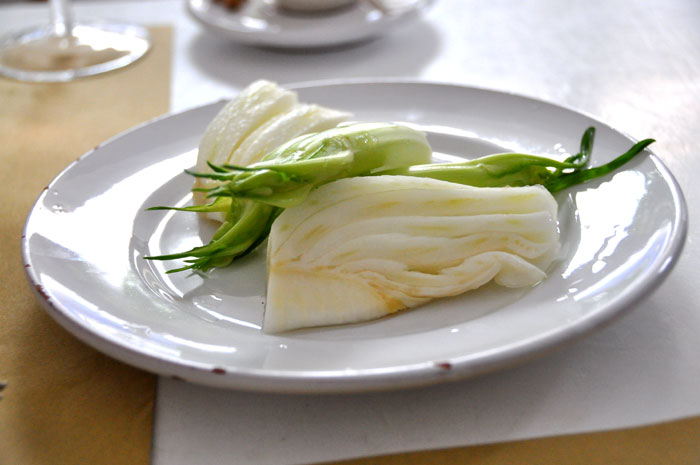 The pasta course is penne with zucchini pesto, fried zucchini flowers and fresh ricotta. This is one of the best pastas I’ve ever had; a perfect balance of flavors and textures. The sauce is creamy, probably with some of the ricotta mixed in with the pesto as well as dolloped on top and the zucchini flowers are fried, adding a crunchy texture and salty fried flavor which offsets the creaminess of the sauce. The penne pasta is cooked very al dente, something we’d see just about everywhere in the region. This dish was served split on two plates so what you see in the photo is a half portion. 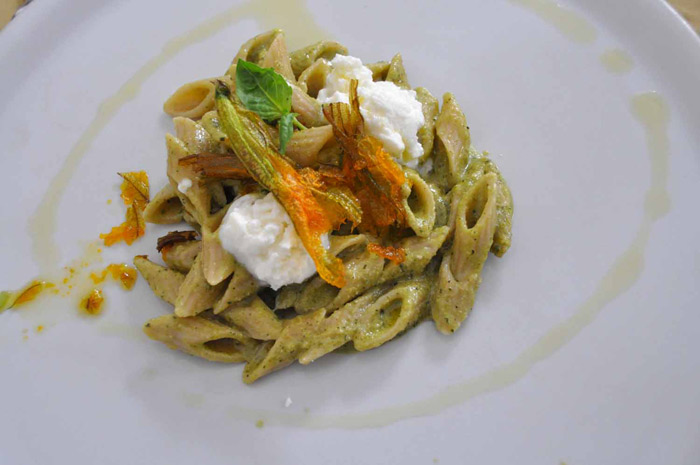 The last course is a plate of grilled lamb chops with diced roasted vegetables (carrots, zucchini, tomatoes, peppers) and rosemary. The lamb chops are tiny but perfectly cooked.  The vegetables still taste bright and while roasted, aren’t mushy. 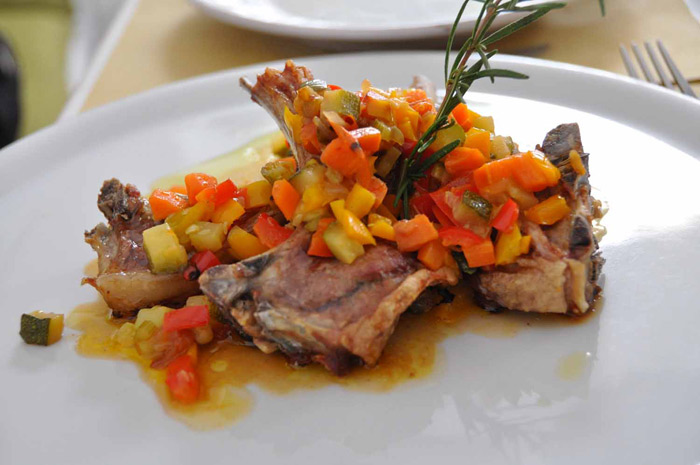 After the meal we’re offered a small plate of cookies and candied almonds which look like they are done in house. 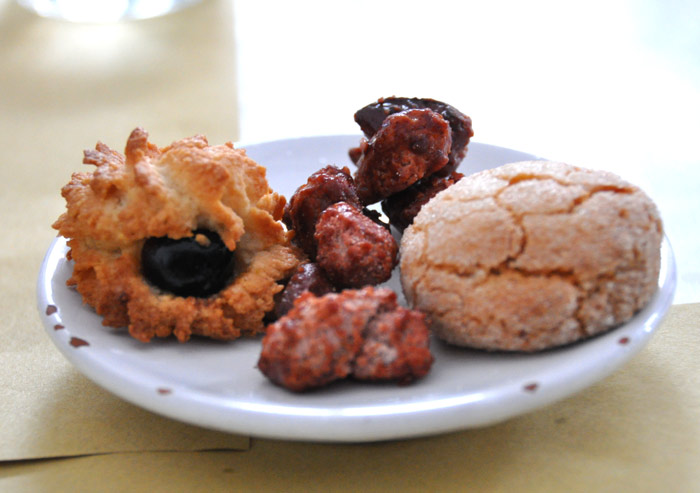 In the end, our lunch is 45 euro including the coperto, 3 glasses of Rose, bottle of water, antipasti plate (9 euro), pasta (10 euro), and meat course (11 euro). We would have gone back again the next day, but they are closed on Mondays. 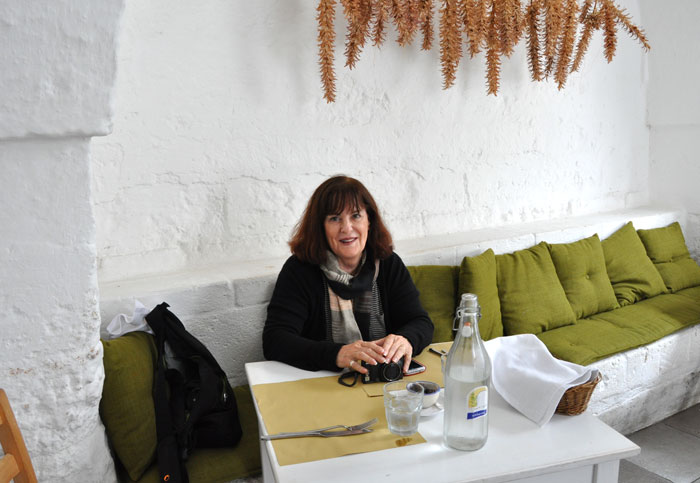