On our last day in the Valle d’Itria we drove to Martina Franca. We lucked out and parked on the street which led straight to the the main square at the Piazza XX Settembre where the walking tour in the Thomas Cook Puglia Guide

begins. Street parking was paid to an attendant who stopped traffic on the narrow street, guided us into the space, asked how long we’d be, and then presented us with an official receipt for 1.80 euros for 2 hours. It was efficient, though labor intensive.

At the far end of the square, just next to the Arco di Sant’Antonio (which is the entrance to the centro storico), is an information office where we picked up a free map to the town. Pass through the arch and to the right is a lovely 17th century Pallazo Ducale (ducal palace) in one of the (now) municipal buildings. At first it appears uninteresting inside, but climb to the third floor you are rewarded with some of the original (now empty) rooms, complete with ceiling frescos, family portraits and painted doors and walls. There was a very cool modern photography exhibit there as well. 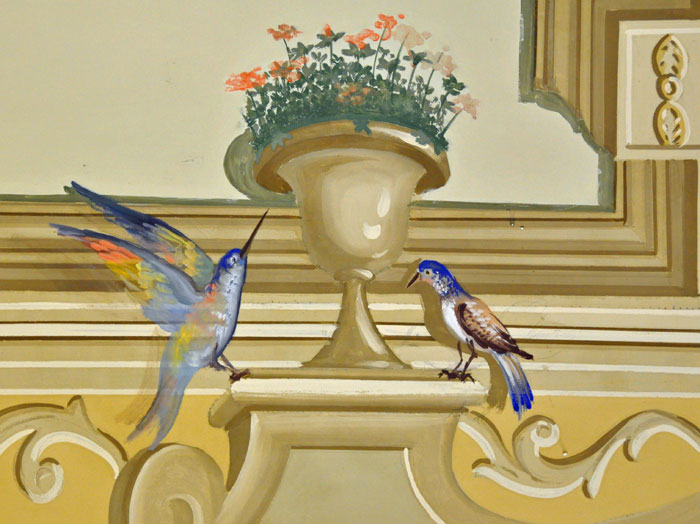 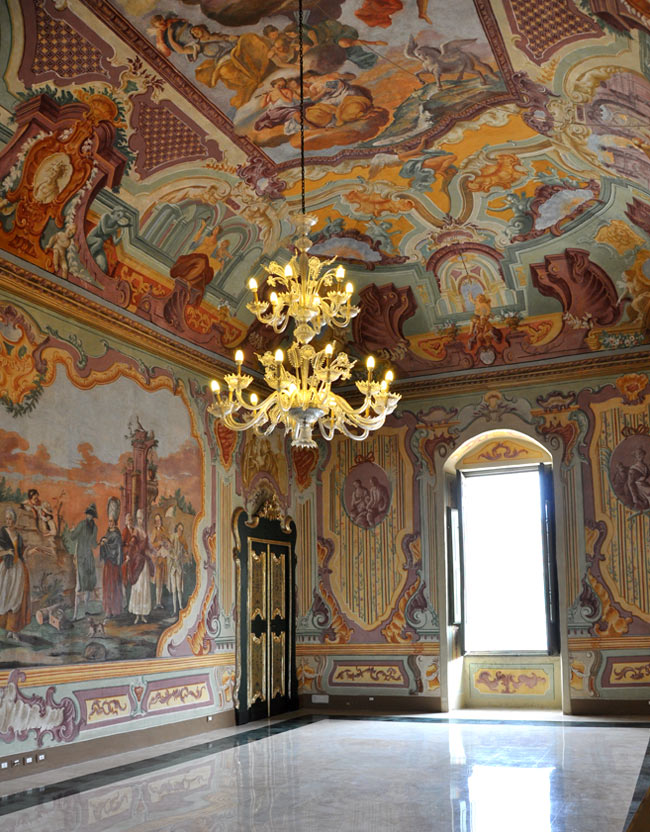 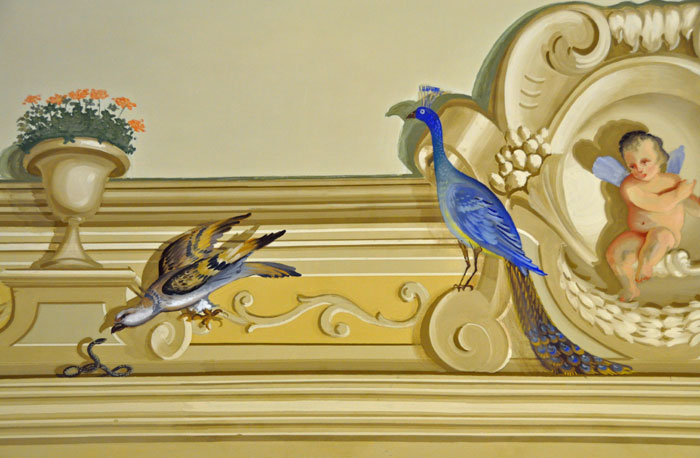 The old center, like most in the Valle d’ Itria appeared to be mostly a pedestrian only zone with the occasional scooter and car coming through. It felt like a very small town, but when I look at a map now, I realize we only saw about 25% of the main streets, so I think it would certainly be worth more time than we gave it (or rather, than we had available on that day). 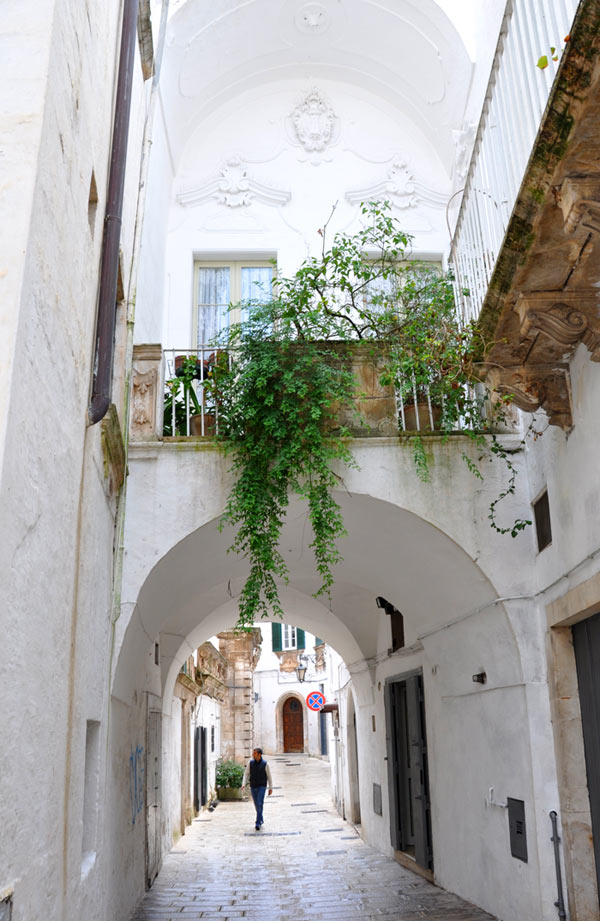 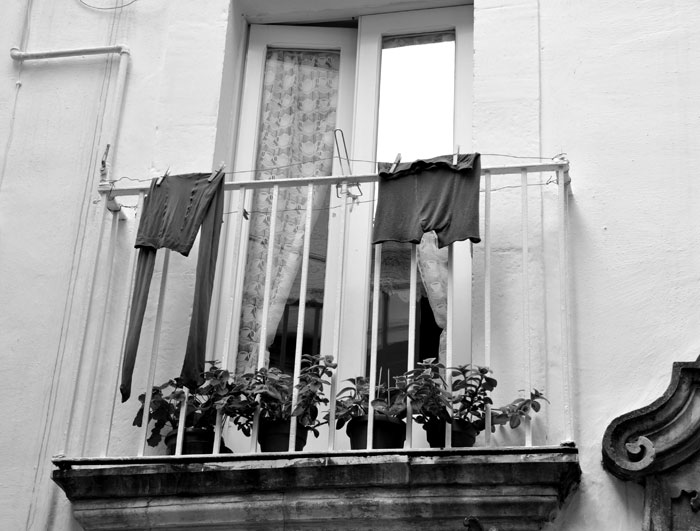 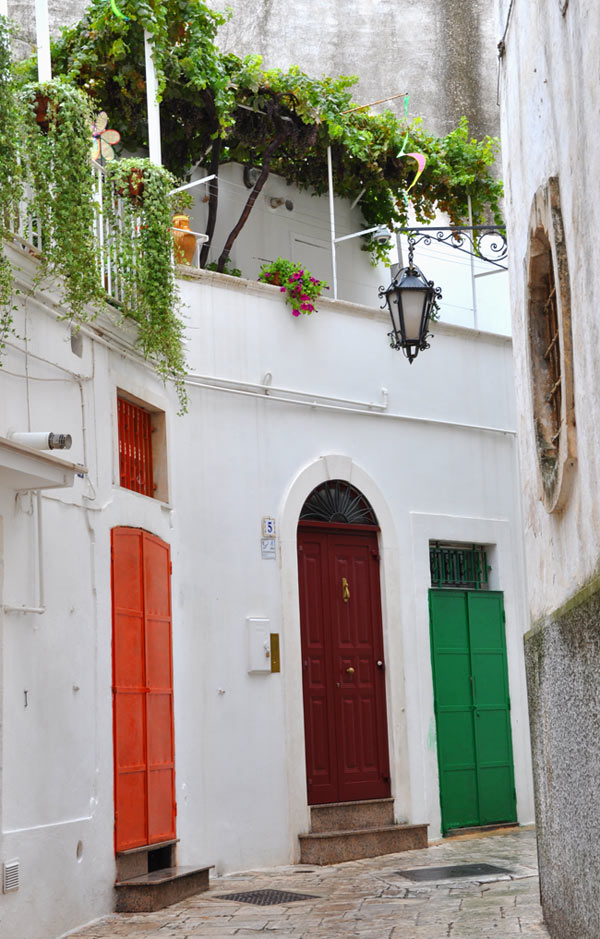 We followed the main street away from the Ducal Palace and toward the Basilica de San Martino, built in the mid 1700’s, complete with a candy confection of a Baroque yellow pastel interior. Tip; if you need a public restroom there is one behind the church, as you face it, to the right. Inside the church is one of the strangest statues of the Virgin Mary I’ve every seen; call it “Virgin Mary Had a Little Lamb diorama”. I believe it’s actually called the Madonna Patorella. There’s also a version of the Last Supper painted by Domenico Carella. 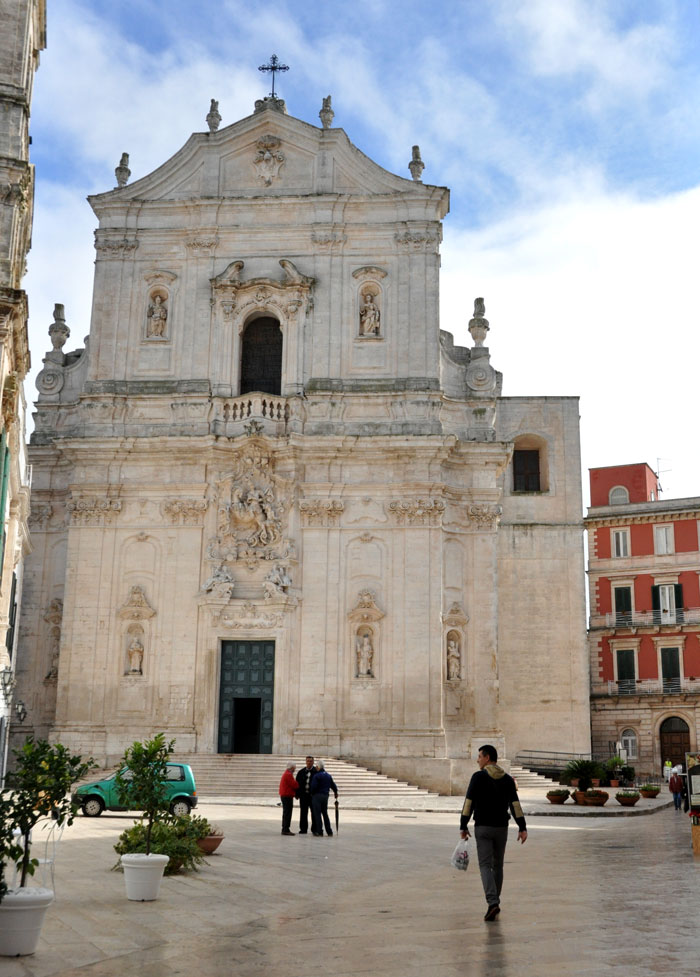 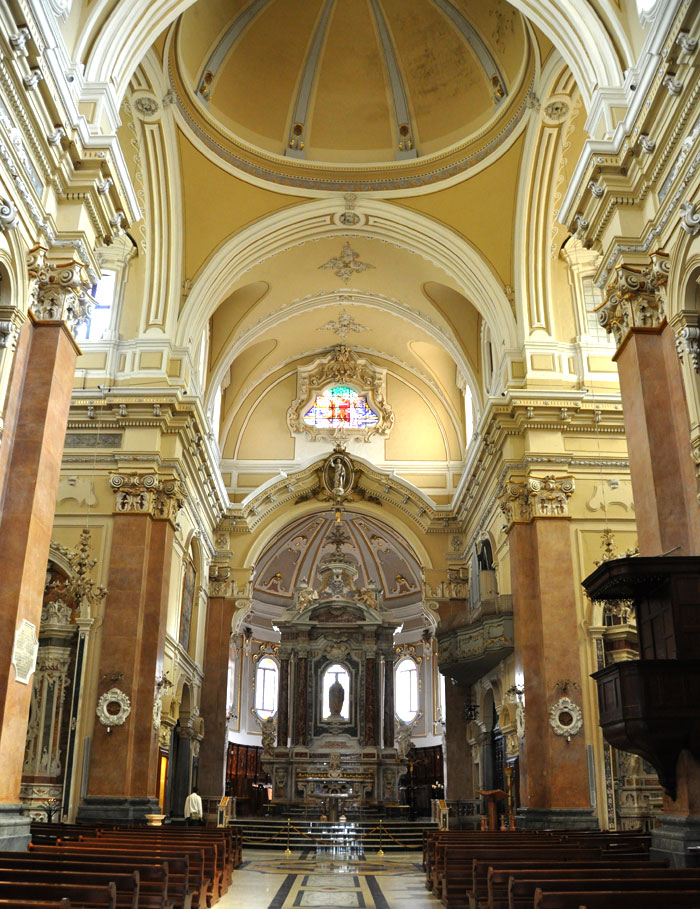 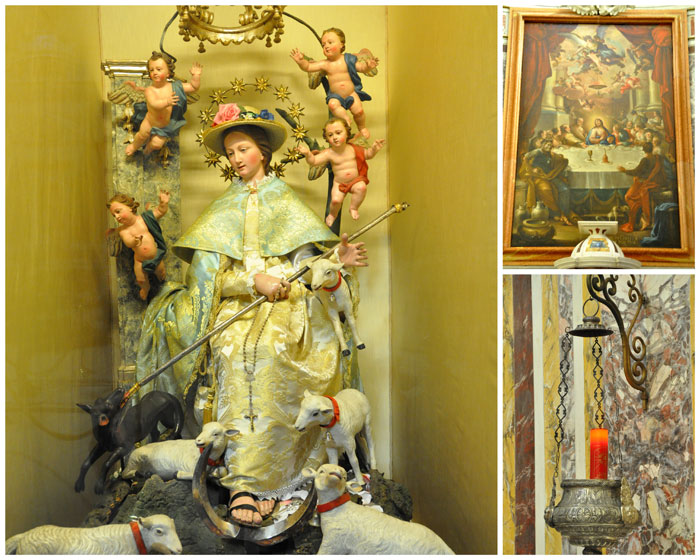 Walking away from the Basilica,  you’ll come to the horseshoe shaped Piazza Maria Immacolata and its arched portico. Nearby is the Cafe Tripoli, known for the cream filled pastries called pasticciotto. Of course, we had to buy one. Pasticciotto are like baked little pies made with a short bread crust and filled with a thick pastry cream, sometimes flavored (lemon and almond for example). This one was plain, and fairly heavy and sweet. I can’t say it was the best version possible of this local pastry (also known as pasticciotto leccese). 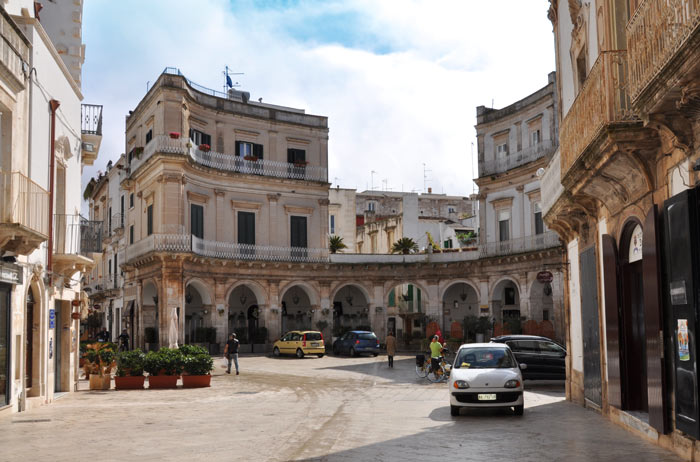 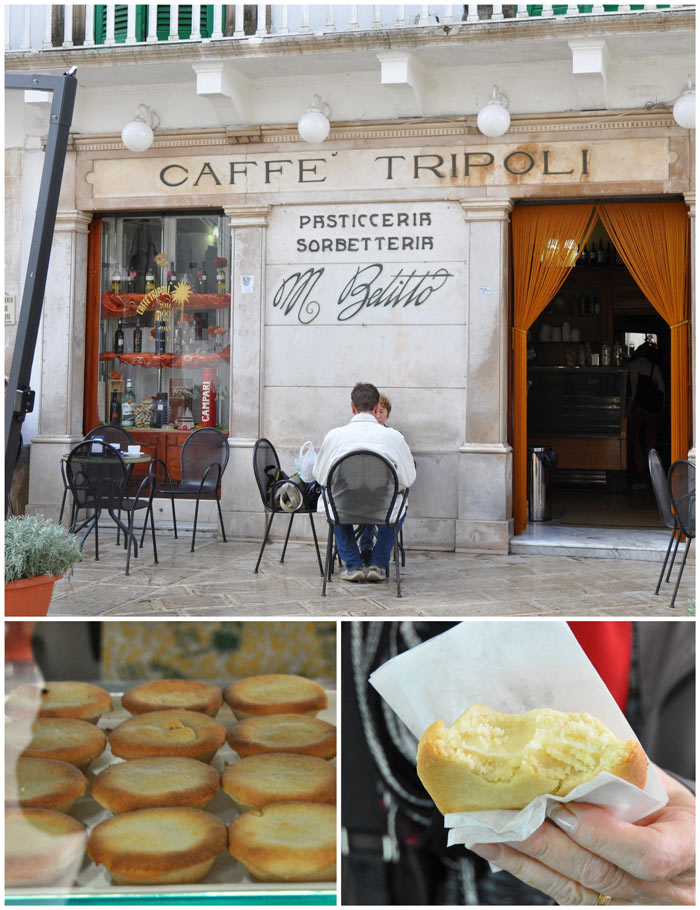 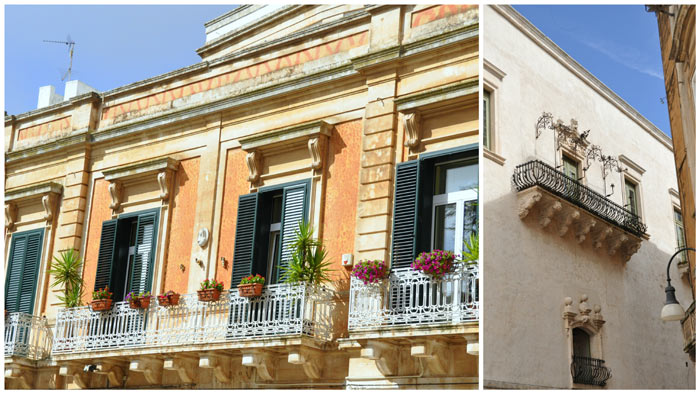 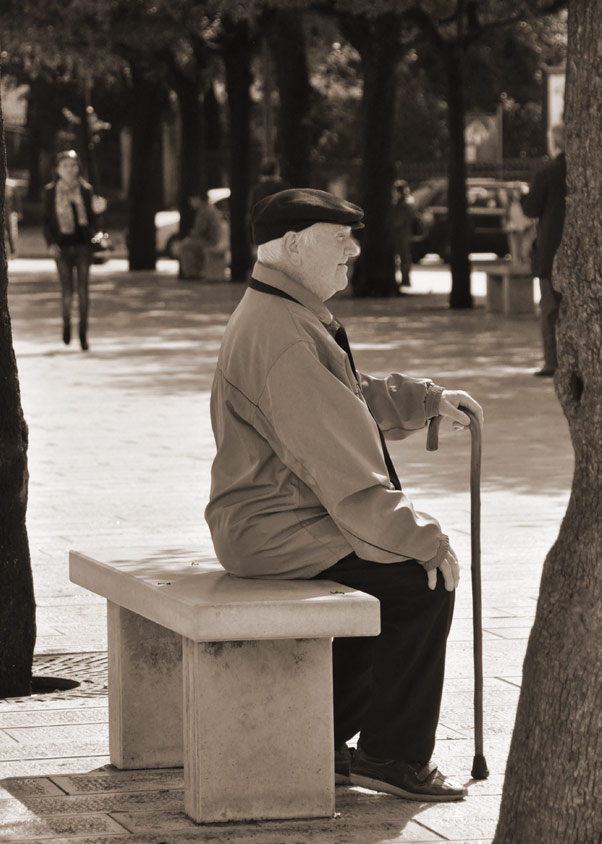 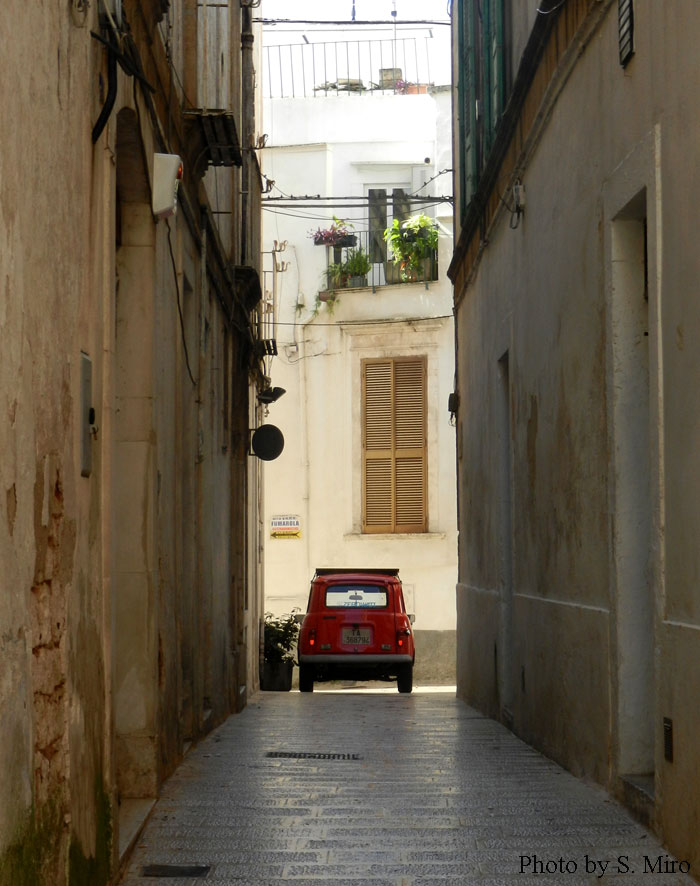 After a while we decided to drive to Ostuni for lunch. What should have taken maybe half an hour took us more than twice that in dumping rain. The amount of water on the road was downright scary. Once we got to Ostuni we drove in circles looking for a place to park. Soon the town was one massive traffic jam due to flooding and we could not get out of the car. In fact, we had to turn around and find an alternative way out of town and in the end, we completely missed seeing Ostuni and missed lunch. We finally found a grocery store that was open (many close mid afternoon) and thought we’d stop for a can of soup to heat in our apartment’s kitchen. Who knew that cans of soup don’t seem to exist in Italian grocery stores? At least not this one. We finally found some soup, all but hidden, on a high shelf in foil pouches. Soggy, we retired to the masseria to have dinner there and prepare for our drive to Lecce the next day. 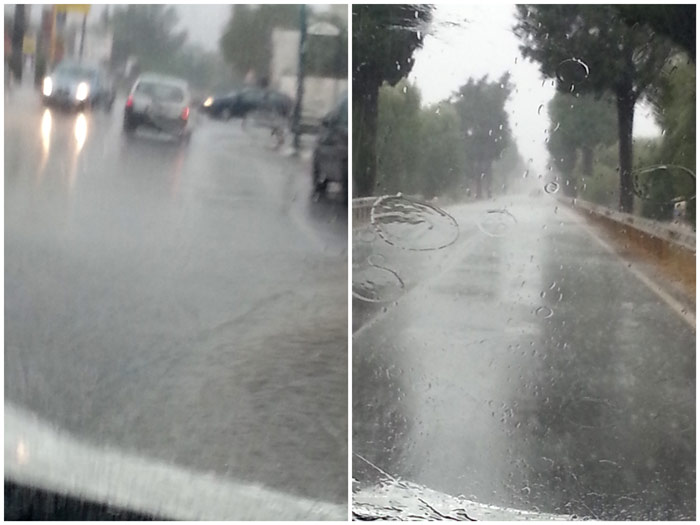