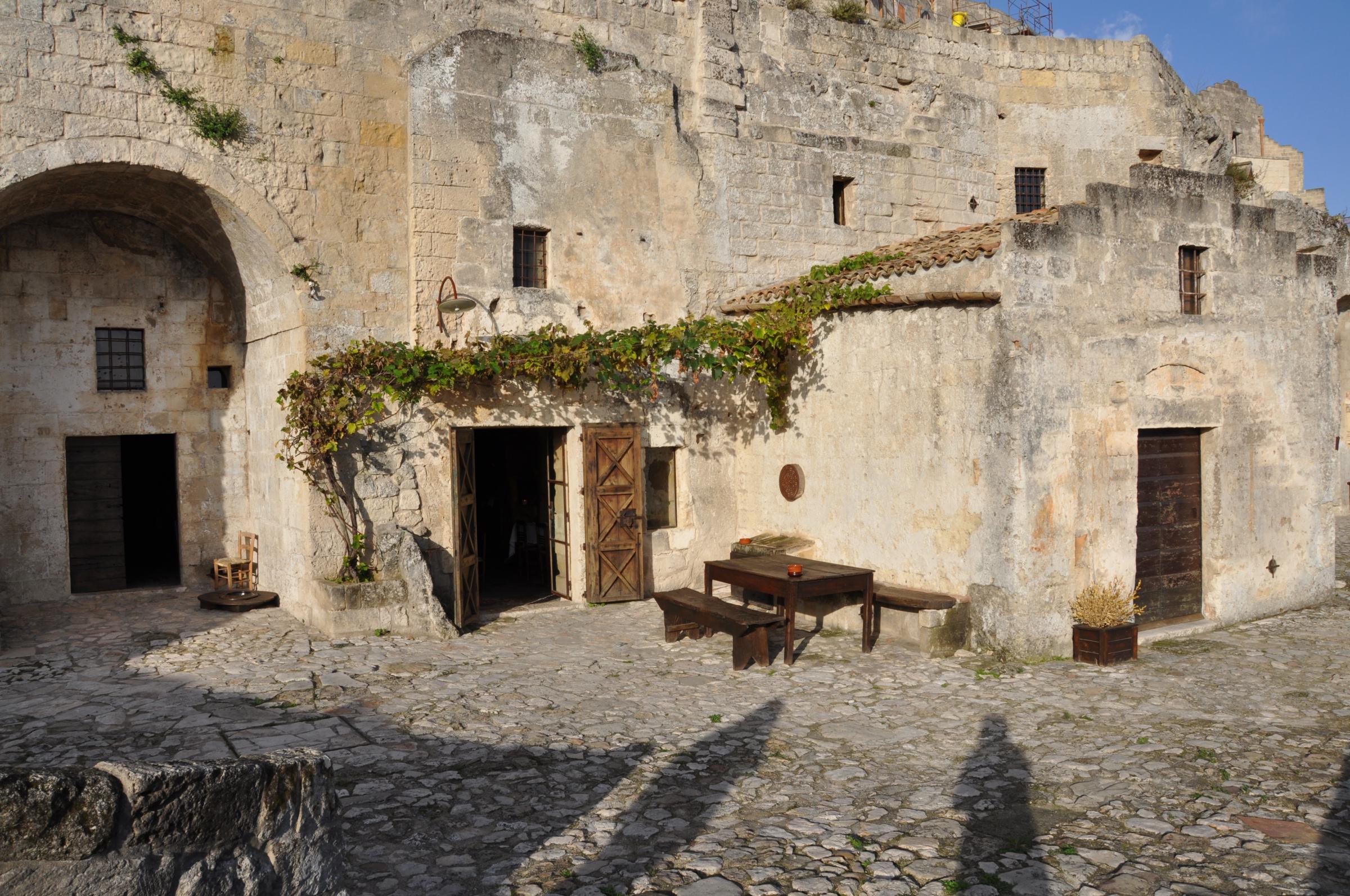 We are in a cave. Yes, a cave, but we are not spelunking. This is no ordinary cave (are there such things anyway?) for it was also once a monastery, so there are pointed arches separating the rooms. It’s neither cold nor humid inside, though it can be a little dark. Electric lighting is subtle, and for the most part, hidden and angled for dramatic effect rather than to allow one to put on her mascara.

Flickering candles everywhere add to the ambiance, as do the pieces of roughly carved wood furniture, homespun linens, and high iron bed stands. But then there are modern bath fixtures and wifi (though no tv nor telephone) lest you forget in what century you are sleeping.

When I was first researching for this trip I came across Il Sextantio in Matera and was immediately enthralled by its style and the allure of sleeping in a cave, albeit a luxurious one. The hotel sits in the restored Sassi of Matera. The literal translation of Sassi is stones, but really refers to the caves carved out of the stones in the ancient town which had been home to the people of the area for hundreds of years all the way up until the 1950s when the government forcefully relocated most of the population to the “new” town section of Matera. In the 1990’s the area was reopened to development and private citizens. It’s now filled with hotels, hostels, and restaurants yet many empty structures remain.

Several months later I came across an online auction for three nights at this property and the price made it too tempting to pass up. When we arrived, there was one more surprise. Because the hotel was almost full on our first night there with a tour group from National Geographic, we were given one of the very best rooms, a suite at the top of the hill, Cave 21. 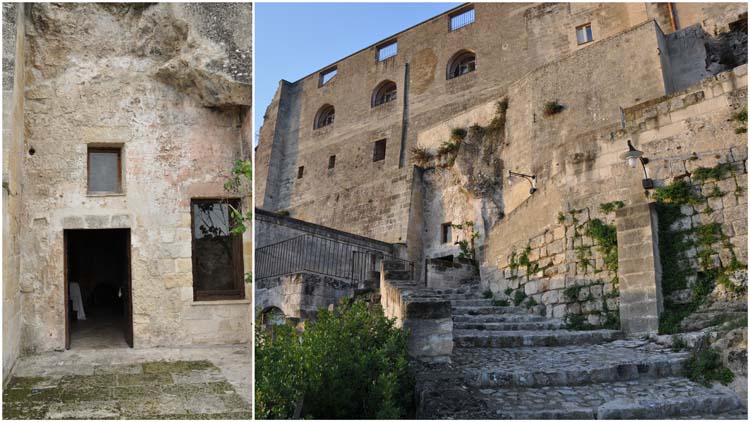 Above, the entrance to our room left. At right, are the steps which lead both to our room and up the hillside to the Piazza del Duomo. The wrought iron railing in the left of the photo is our terrace. Because we were on the main path, we often had people trying to peer into our room, which was a little odd at times.

The space is actually several cave rooms joined together. The only natural light comes from the front door and the window next to it. 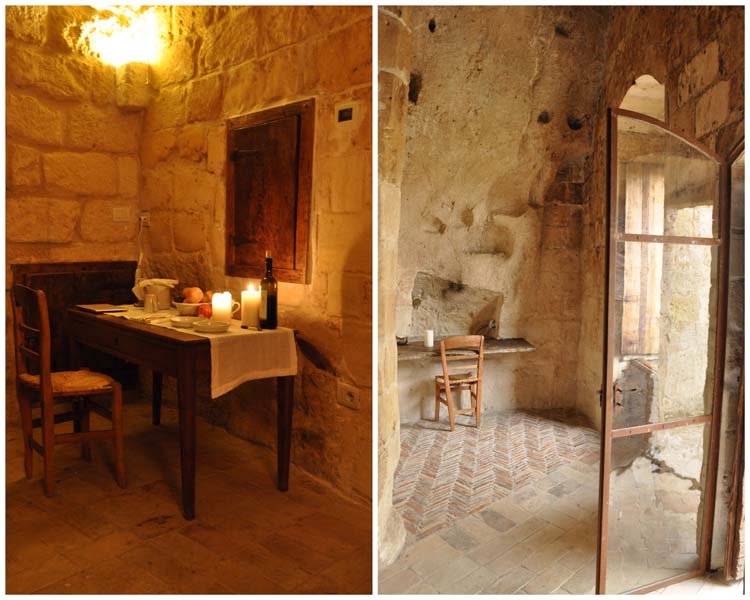 Above left, a space opposite the bed. In the wooden cabinet above the table is a mini-fridge. At right, the entrance to the room with a small desk area with light. Below, the large bed with two twin beds in a separate alcove. 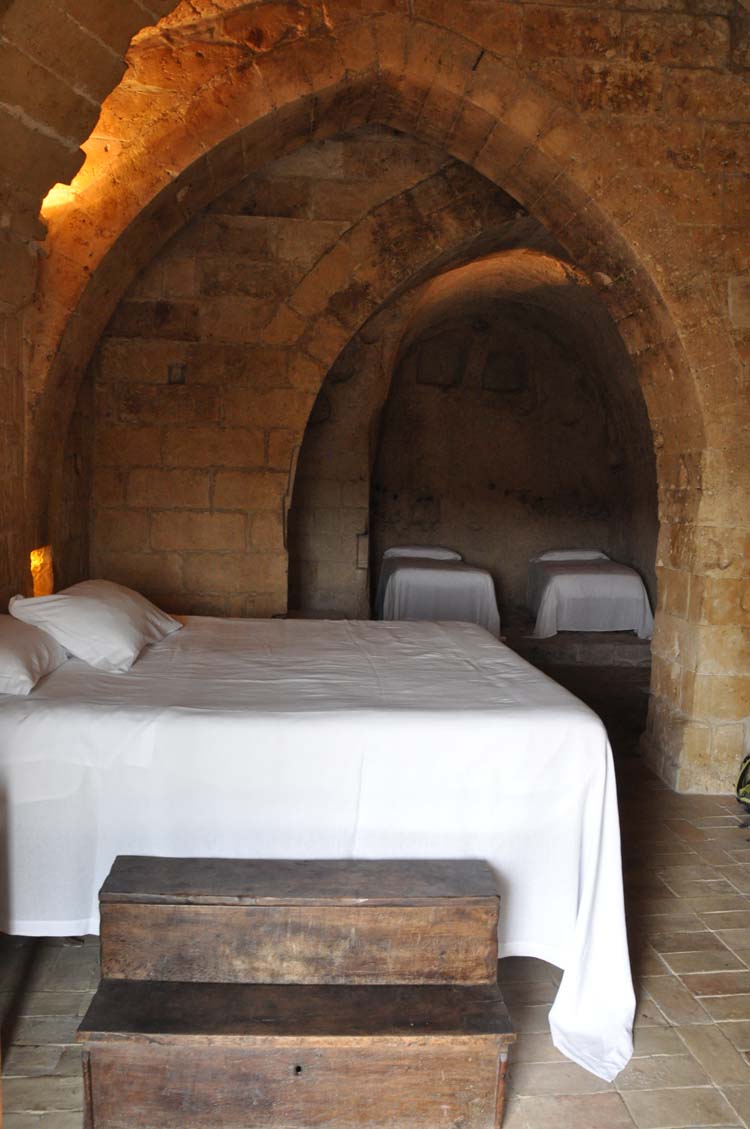 To the right of the alcove seen above, is the bathroom area, seen below. There is a room with just a bathtub in it and to the right, a room with glassed-in shower, toilet, bidet, and sink. The walls, ceiling, and floor are all stone. 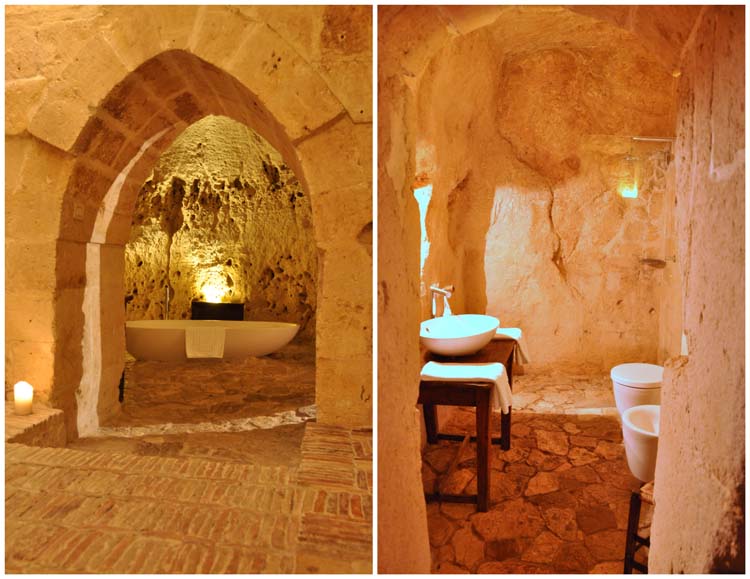 The downside in the quest for the authentic experience a lack of light (both natural and electric) and comfortable seating both inside and out. Our room had a lovely terrace with a smashing view, but nowhere to sit. Inside there are two horribly uncomfortable, tiny chairs.

The terrace below is in desperate need of a bench or some other type of seating to enjoy the views. But those downsides are small when everything else is considered. The hotel has a stark rustic beauty both inside and out and something as trivial as lack of reading light was easily solved by the hotel staff bringing us an extra lamp. Fortunately, there is no shortage of electrical outlets in the room. 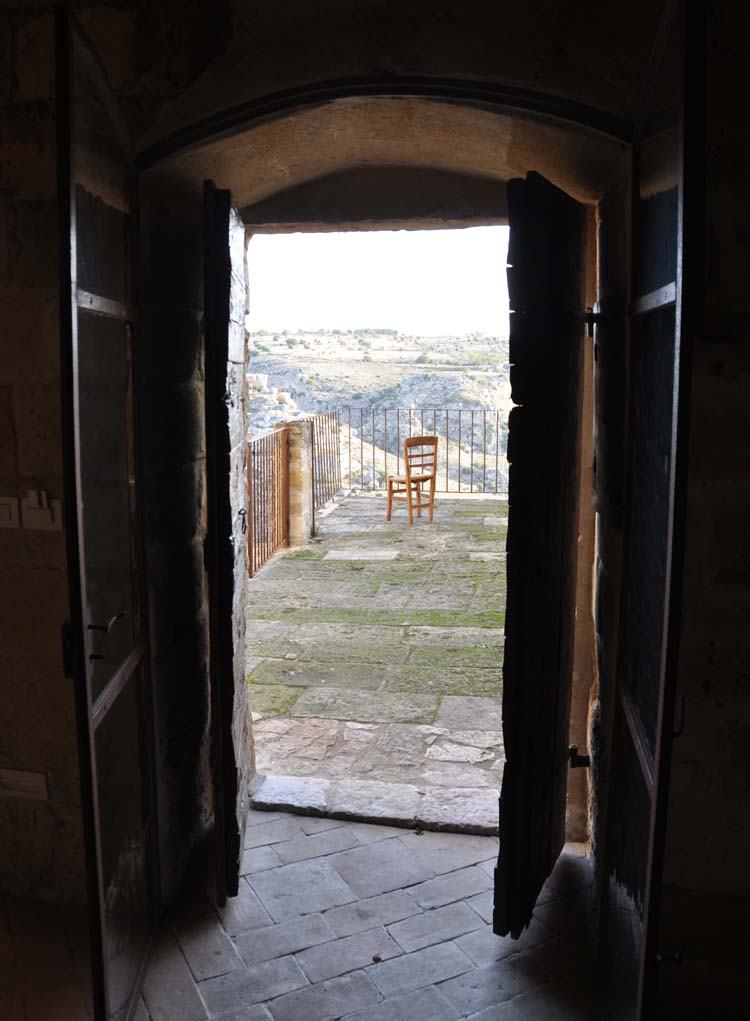 Below, the view from our terrace (pictured above). 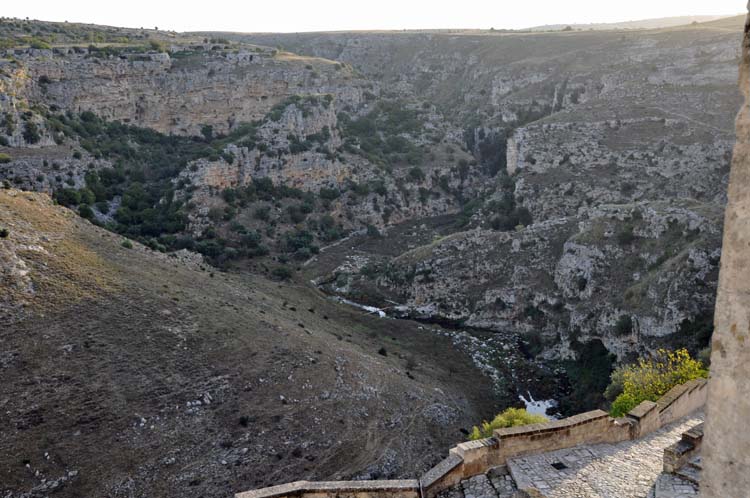 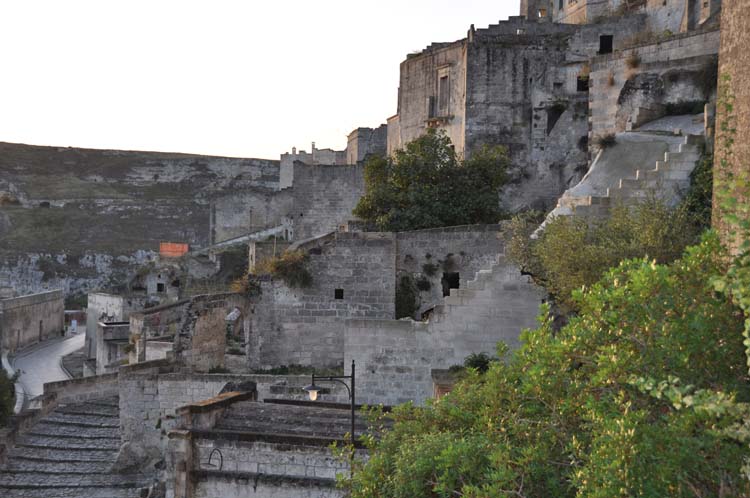 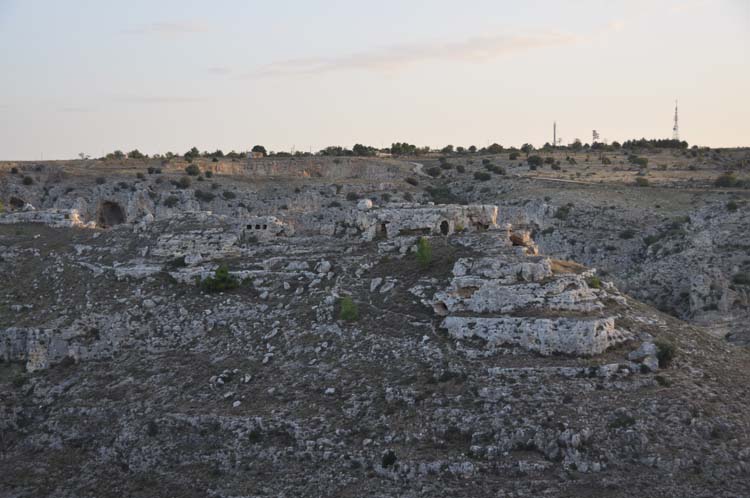 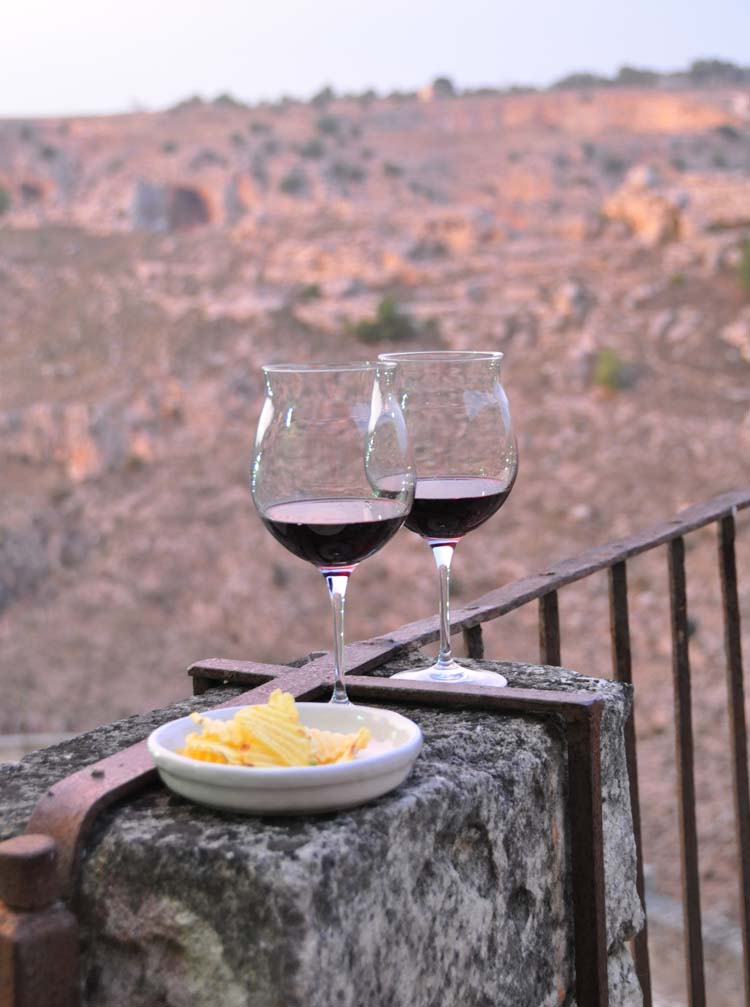 While we were there, a balloon festival was being held and it was magical to watch them fill with air and float overhead. 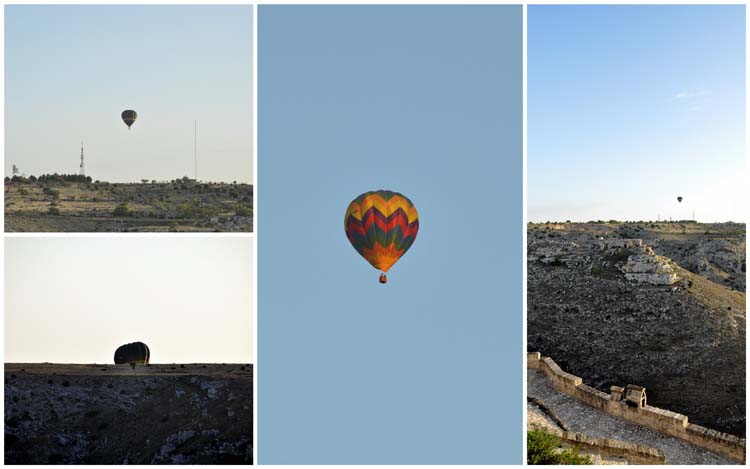 Below, entrance to the breakfast room. 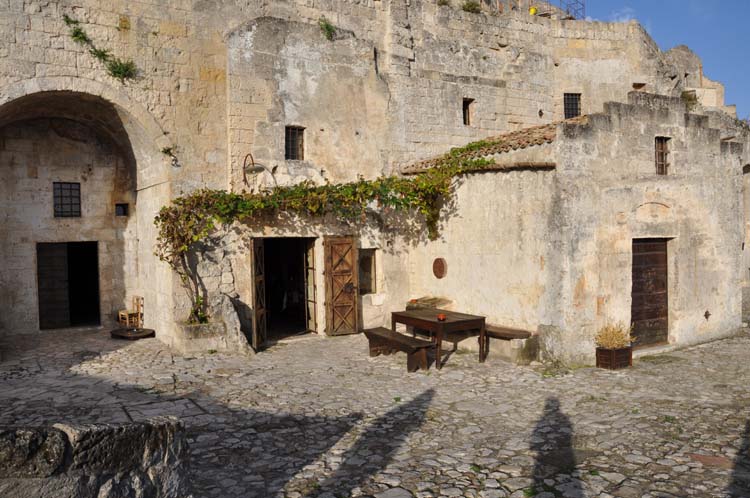 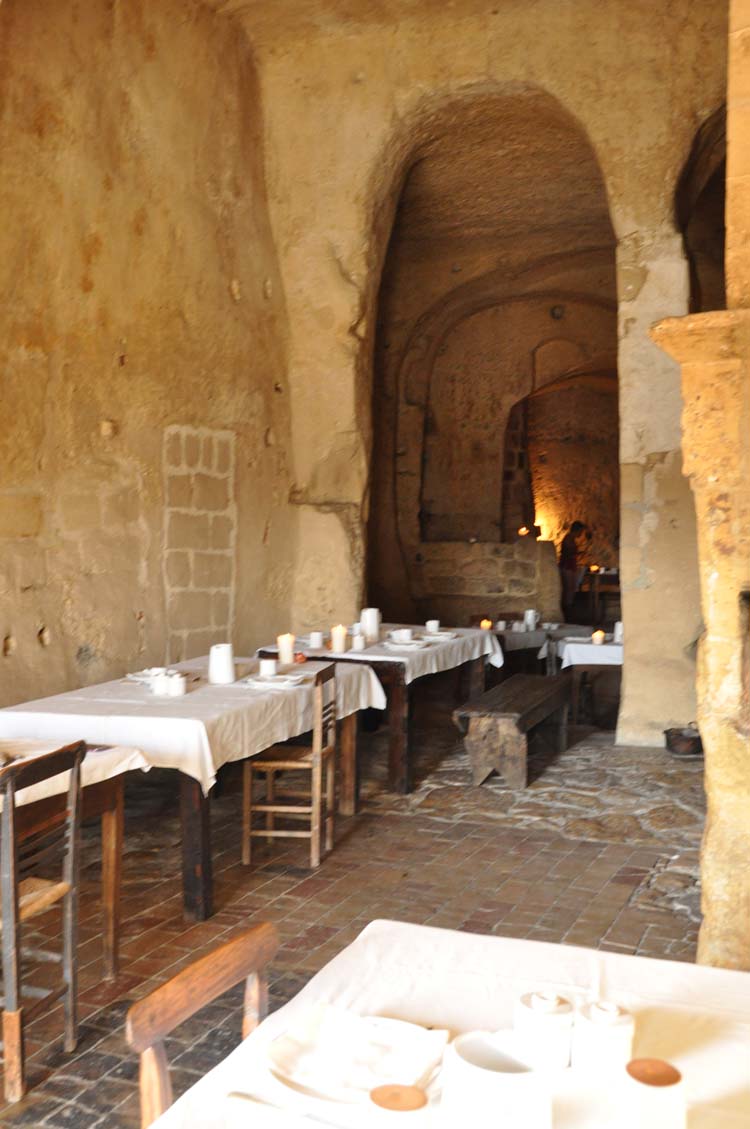 Breakfast is fantastic and varied, but traditional. There are several locally made cheeses including fresh and creamy ricotta, mozzarella, burrata and smoked cheeses.

There are various pizza rusticas but my favorite was a flaky, savory pastry pie made from a filo type dough with layers of eggplant, mushrooms and mozzarella. I enjoyed a version of this every morning with such glee usually reserved for a condemned man’s last supper. In addition to the savory breads there were at least five or six different sweet cakes and always a big bowl of fruit salad. Freshly squeezed orange juice and coffee are available. 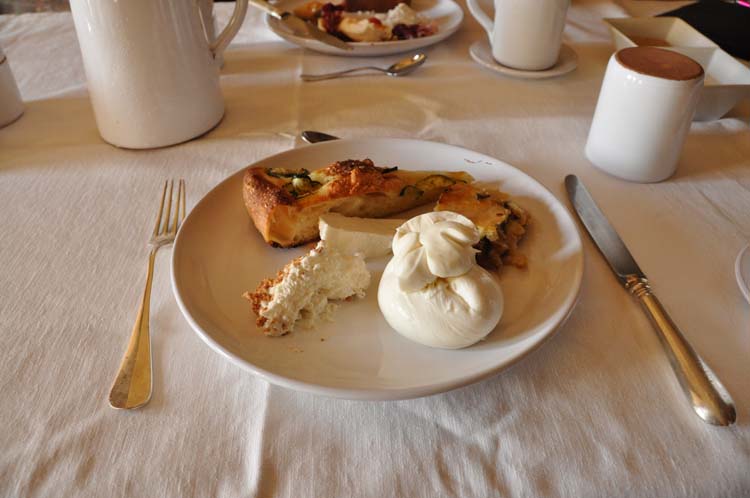 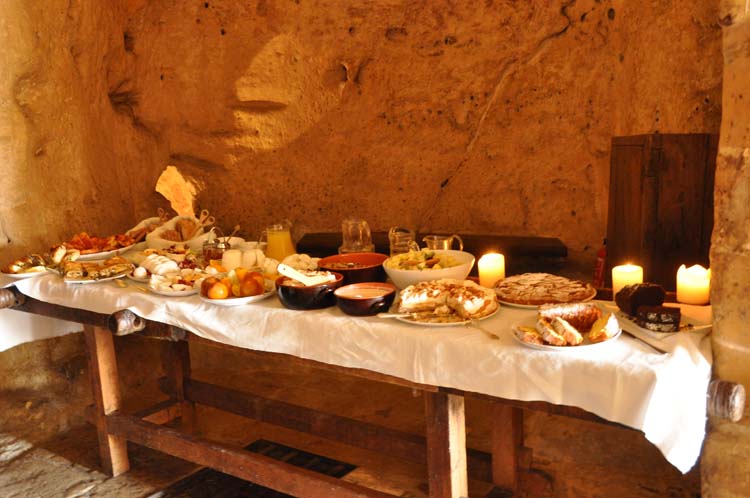 We very much enjoyed our stay at Il Sexantio and would return again in a heartbeat. If you go, do be prepared to do a lot of walking. The entire town is accessible, but the ability to climb stairs, and a lot of them, is a must. Don’t plan on driving to get around the town; the roads are narrow and in the old quarter, dead end to nowhere. Free parking is available in a lot about 100 meters from the hotel.

Disclaimer: As always, I received no compensation for this post and paid for my stay out my own pocket.

A Walking Tour Through the Sassi in Matera Italy