We were at the Tambo del Inka in Urubamba for four nights and while our days were so busy we never really saw the town, we did walk from the hotel each night to find somewhere to eat dinner. Of course the hotel has a lovely restaurant, but menu prices were steep and there was someone there each night playing cheesy live music (picture a guy with electronic keyboard and mike). Honestly, that alone was enough to keep us from dining there. So, where to go? There are literally dozens of places within 6 blocks of the hotel, so you are spoiled for choice in Urubamba.

Please forgive the poor quality of the photos; all of them were taken with my cell phone because I didn’t feel like bringing my DSLR to dinner. All prices are in Peruvian Nuevo Soles which at the time we were there (April 2014) were about 2.8 to the dollar.

On our first night we went to the concierge recommended Q’anela. She’d told us she liked it better than El Huacatay which did not have any reservations available. Armed with a little map, we walked the 4 blocks or so to the restaurant where we were the only people dining save two women at another table. There are two small dining rooms with traditional furniture overlooking a small garden. The restaurant bills itself as having “slow cooked traditional cuisine.” 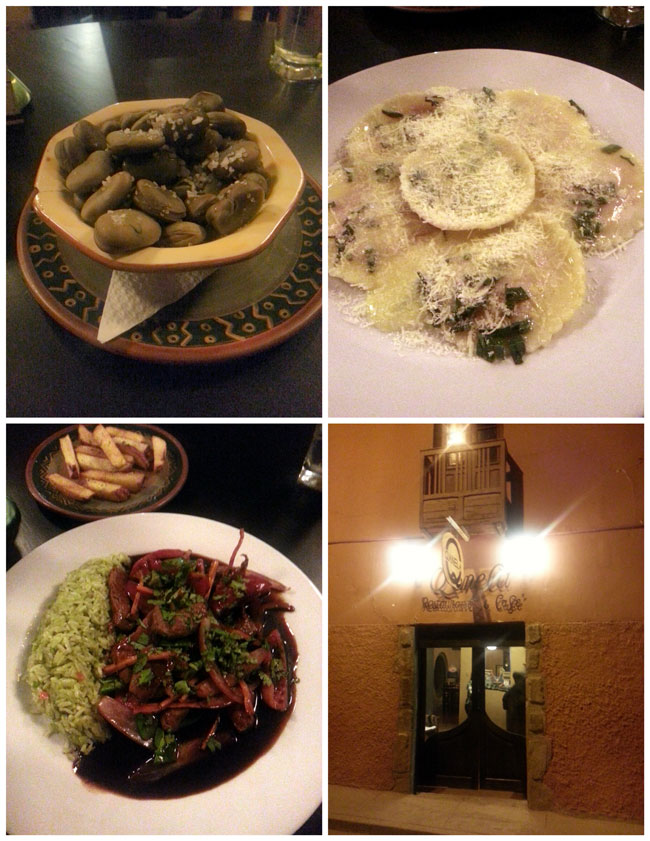 Our meal at Q’anela included a small bowl of complimentary broad beans to snack on while waiting. I had some ravioli while David ordered our first taste of Alpaca in the form of the traditional Lomo Saltado. This came with a green tinted rice and yucca fries. Unfortunately, I was so exhausted from our long trip I didn’t write down any details of the meal and the rest eludes me.

On our second day in Peru we had a big day of sightseeing, visiting town of Chinchero and it’s market as well as Moray and the Maras Salt Pans. By the time we got back to the hotel it was mid afternoon and since we hadn’t had lunch, we opted for a cocktail and a sandwich in the bar. At dinner time we weren’t that hungry so decided that pizza would do the trick and we landed at Pizzeria Quinua which we’d passed the night before, only a few blocks from the hotel. 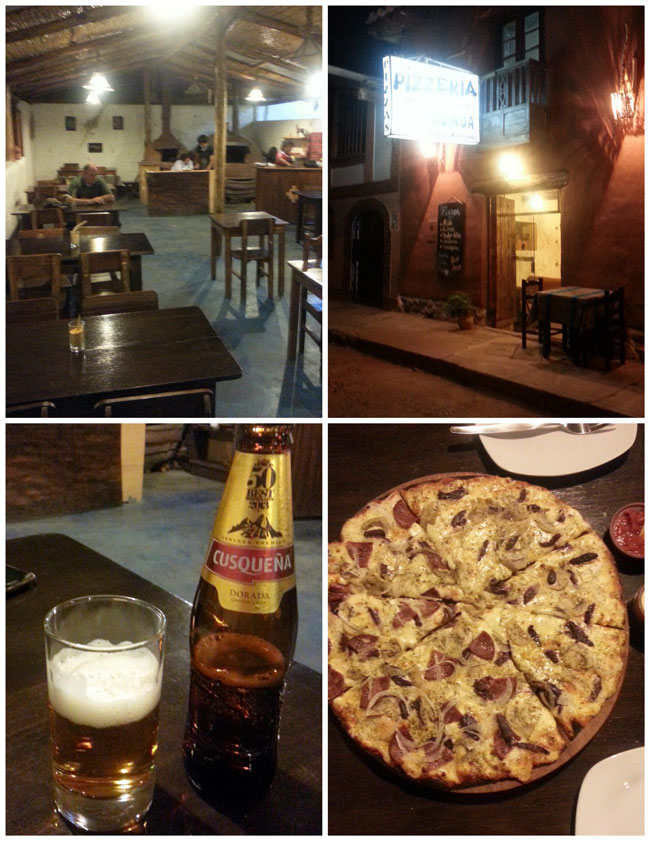 The place again was completely empty, except for the four teenagers working there. In their favor, they did have a wood fired pizza oven, so I had high hopes. Unfortunately, the pizza was only acceptable. The crust needs some serious work. Actually, I think it needs less “work” (as in they over worked the dough) and a better recipe. It lacked good flavor and texture. Still, it may be worth a try if you are craving pizza. I think the place might be new and they are working out the kinks. At least I hope so.

When I was researching where to eat in Urubamba Tres Keros came up over and over (as did El Huacatay below). This restaurant is in an unobtrusive building on the main road through the valley and only about 4 blocks from the entrance to Tambo del Inka. Inside the front entrance you’ll find a courtyard and stairs. Up the stairs is the warm dining room with the effusively friendly chef and owner, Ricardo who does everything possible to make guests feel welcome.

We were seated at a table by the fireplace and brought a basket of bread with home made butter. By our third day in Peru I was ready for some vegetables so I ordered the salad with avocado, asparagus and hearts of palm and a shallot vinaigrette along with a delicious passion fruit sour. I was not disappointed in either. The salad was exactly what I was craving and was fresh and flavorful. David had the traditional lomo saltado made with beef filet and was pleased with his choice. In the middle of the meal a small taste of prawn risotto appeared, a gift from the owner.

When we asked Ricardo about Piscos, he insisted that we taste the one he considered “the best” one of which they only make 300 bottles a year. While it was good, to me Pisco is not a sipping liquor and is best left to mixed drinks. We also had an opportunity to try the wine pictured below, another limited production 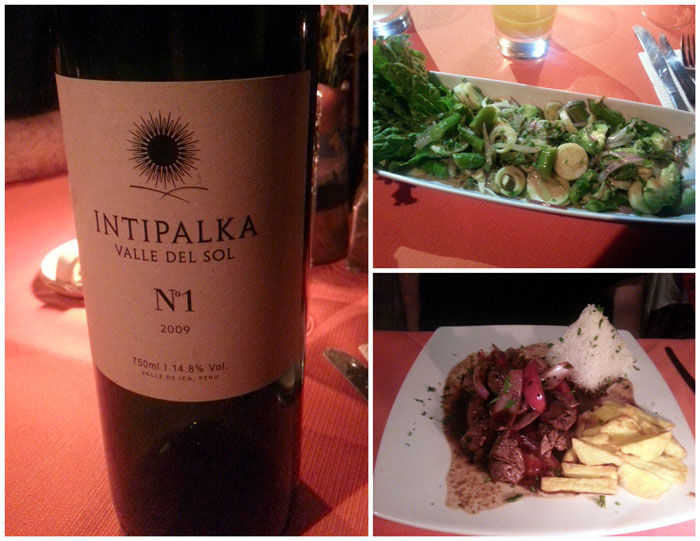 This is probably the most famous place in town and reservations are certainly recommended because it’s so popular. The restaurant is owned by a local couple (he’s Peruvian and the chef and she’s German and runs the front of house). The setting is a garden and a series of small dining rooms (perhaps this was once a house?). We ended up eating a a low table with a built in banquet in their small bar area and had great service by an Austrian expat. The food here is modern Peruvian with a European flair.

When we ordered a cocktail and a bottle of wine, we were brought a complimentary bowl of olives and bread. The wine list had some decent and affordable choices and we selected a Chilean Carmenere. David started with a potato leek soup with sage and local chorizo and followed that with Peruvian trout with quinoa. I chose the alpaca loin with port thyme sauce, quinoa risotto, pear with thyme, and eggplant puree. The port thyme sauce was delicious with the perfectly cooked alpaca (which tastes like grass fed beef) and I really liked the quinoa risotto too. All the food was enjoyable and perfectly executed. I can see why this place is so popular. We shared a dessert of three home made sorbets, banana and custard. 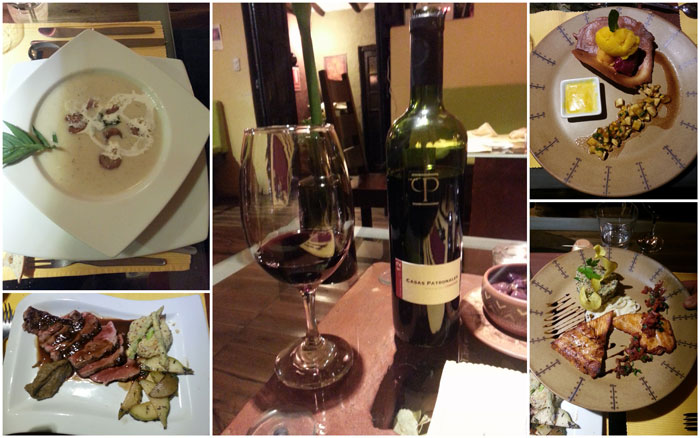 Moray and the Maras Salt Pans