Lima is quickly becoming one of the gastronomic capitals of the world. We only had a day and a half and I wanted to make it count. I’d done a lot of research on where to eat and I had big plans for a ceviche-a-thon. It all seemed to go out the window once we arrived and realized how far apart everything was (the city is HUGE), and it was complicated by the fact that we were there on a holiday weekend (Easter) and many places were closed.

We arrived in the early afternoon and looking for a place nearby for lunch, went to a restaurant called Alfresco based on the recommendation of the concierge. While it’s clearly a popular place, we weren’t especially impressed with the food though perhaps we picked the wrong things; a couple ceviches and cocktails were about $40. Again, we felt our choices were limited. 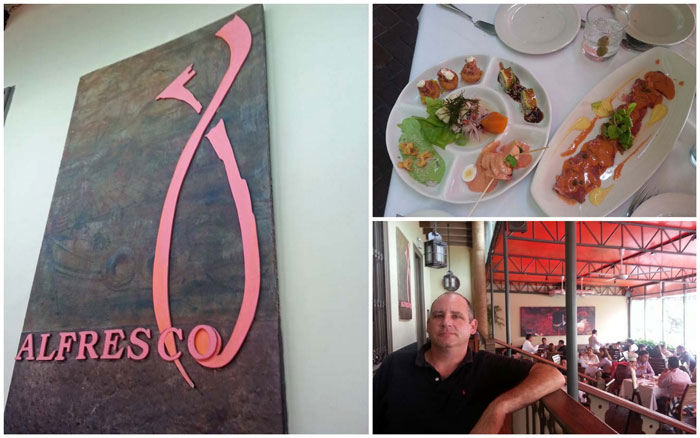 For dinner we went to the critically acclaimed restaurant Maido, which if it doesn’t have a Michelin Star, it should. This place is Japanese-Peruvian fusion done with flair and everything we tasted made sense. It wasn’t forced. The chef, Mitsuharu Tsumura, is Peruvian born of Japanese descent,  and trained in the US and Japan before returning to Peru. We did the Nikki Experience; this was a 15 course, splash out meal. I’ve eaten in restaurants of this caliber all over the world, and the tab, while pricey, was well valued and probably 40% less than a similar meal would cost in Los Angeles, Paris, or London. David had a beverage tasting to go with each course and it was very well thought out, ranging from local beers and peruvian fermented corn drink, to sake, to cocktails with Pisco, to South American wines.

The menu was presented on a folded card which was meant to look like an old Japanese passport. Because it’s been almost a year since we ate this meal, I don’t think I can do justice to the details, but at least I have to menu to say what they are. I apologize in advance for the poor quality of the photos which were taken by my call phone in dim light. 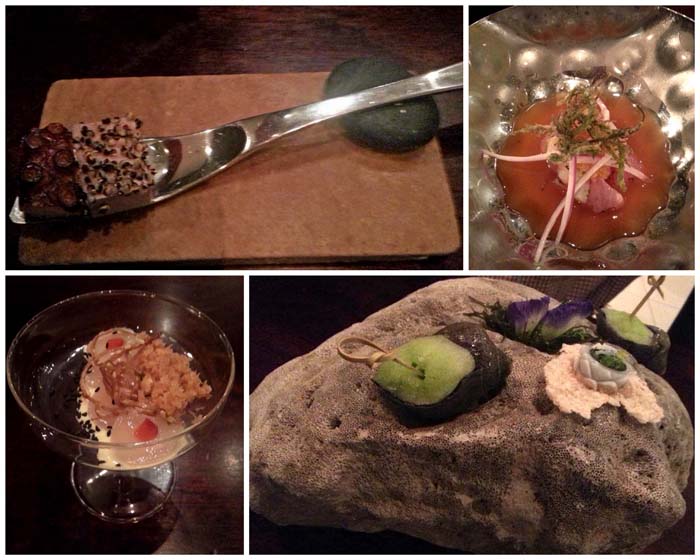 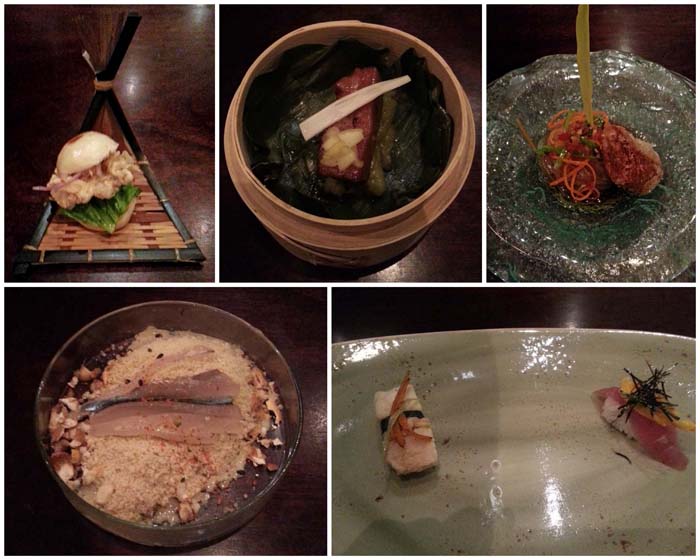 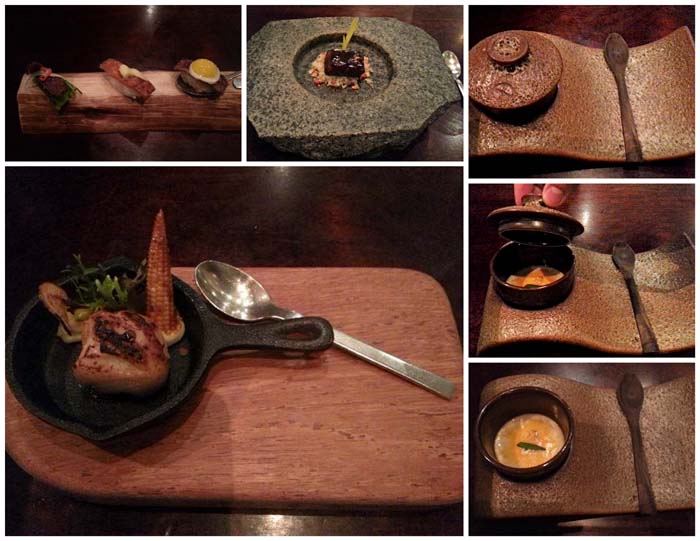 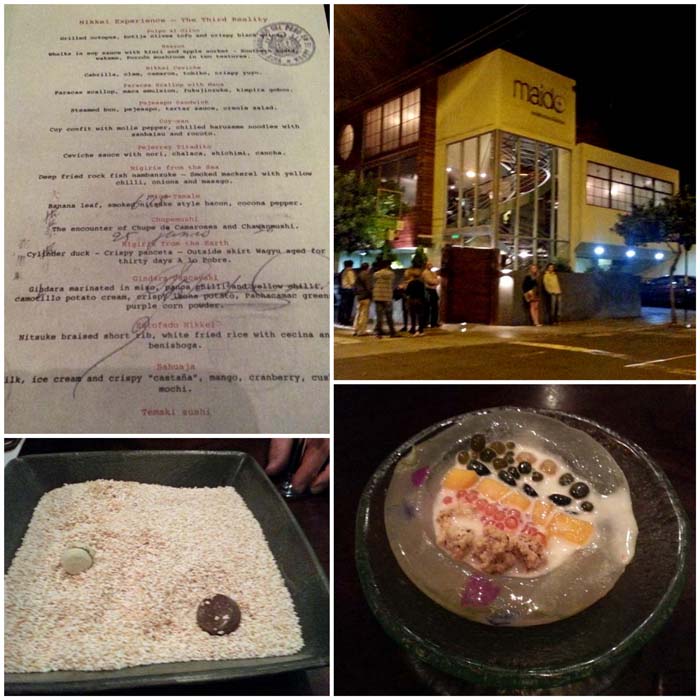 The menu, top left and outside the restaurant, waiting for them to open, top right. Desserts on the bottom; Bahuaja-Nut milk, ice cream and crispy “castaña”, mango, cranberry, cushuro, mochi (lower right). Temaki Sushi (lower left)-this was little petit fours buried in crispy rice “sand” and we had to dig through it to find the treats.

As I said above, the meal was pricy, but for a fine dining experience of this caliber, I thought it was entirely reasonable. The Nikkei Experience was 320 soles per person (about $103) and the wine pairing was 150 soles ($48, but keep in mind there was something for every course). Looking at the menu today, it appears the price has gone up about 50 soles per meal, but the menu (online at least) appears the same.

On our last day in Lima, we went to the old center near the Plaza Mayor. For lunch we went to T’anta, which is a chain from the owners of the famous fine dining establishment, Astrid y Gastón. I had a sandwich with barbequed pork, David had a ceviche, and we both had a Chilcano (a fruit juice and pisco drink). Lunch was about $30. 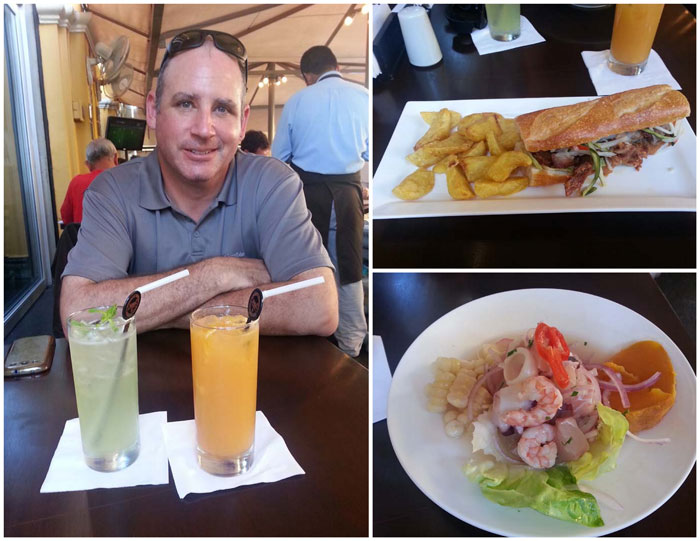 Finally, we visited the grocery store near the hotel on our last night and bought two bottles of Pisco to being home. If you’re interested in a delicious cocktail using pisco which isn’t a pisco sour, then check out my recipe for the “Sacred Valley“, a cocktail inspired by our stay at the Tambo Del Inka hotel in Urubamba. 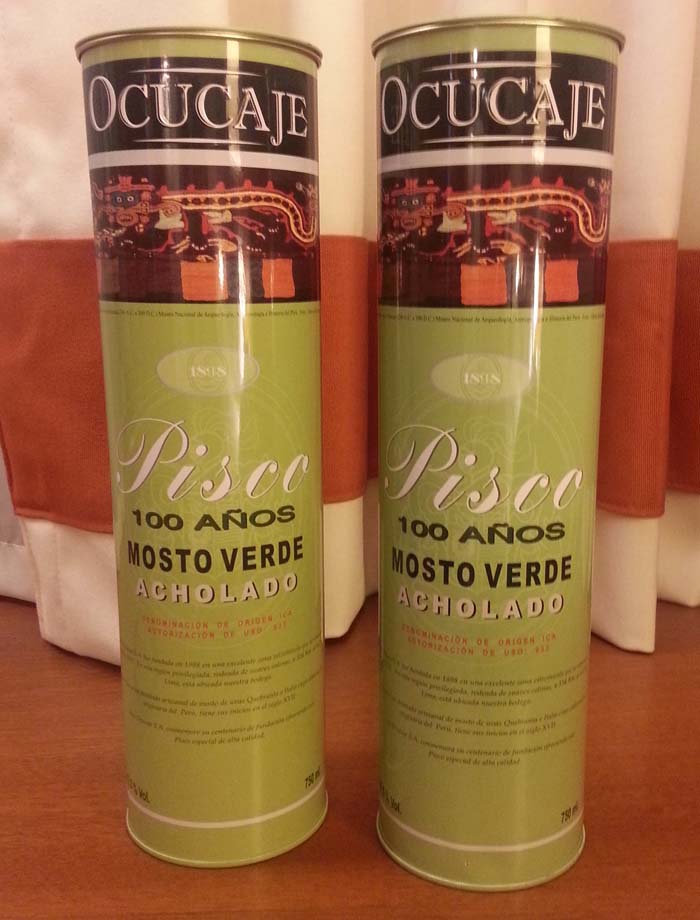