Because we arrived so early (7:30 am) in Bagan, we had two full days and two nights there. We’d hired a driver for our first day there ($35 for the day) and he picked us up at the airport and brought us first to our hotel, the Hotel Tharabar Gate. We were able to check in quickly and enjoy a little breakfast before going out to see the major sights (all temples, as this is why one goes to Bagan).

As I said in my intro post, I booked all of our hotels myself, mostly directly through the hotel web site and that’s what I did here. At the time, July 2014, our deluxe room was $145/night inclusive of breakfast and tax. It also had to be pre-paid in advance via credit card (+5%). It looks like it’s gone up in price but also can be booked on other sites without prepayment. I now work with Booking.com (because I’ve used them dozens of times to book my hotels) and if you book with them, they often offer booking discounts for members. You can book the Hotel Tharabar Gate (affiliate link) with them as well. Any hotel that lets me check in at 7:30 am gets bonus points in my book. I chose the Tharabar Gate because it’s in old Bagan and one of the closest hotels to the main temples (within walking distance of many). We’d only planned on having the driver for one day and getting around on our own the other.

The lobby is open and spacious with soaring ceilings and lots of surrounding greenery. We were offered a cold limeade and a seat while they processed our passport information.

Our room was spacious and had arctic level air conditioning which was required with the 95% humidity and 95 degrees outside. While the hotel said it had wifi all over we found that not to be the case in the rooms and it was spotty at best in the lobby and restaurant. But just two years prior internet access was considered rare in the country and by now, I’m certain it’s much more accessible. 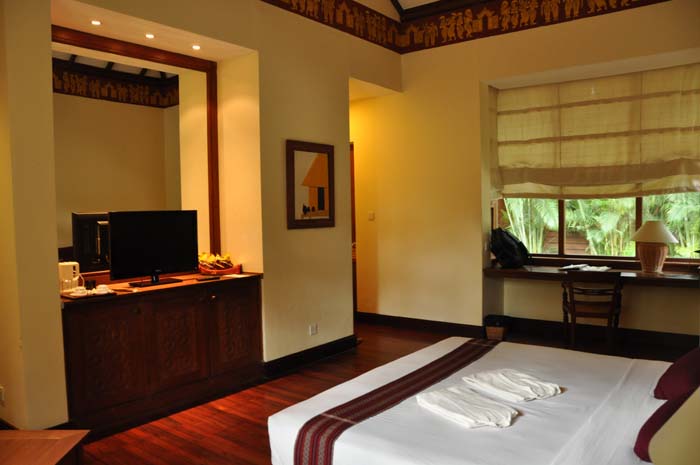 The room also had a mini fridge in the cabinet under the TV, good desk space along the window and an ok bathroom and dressing area (below). 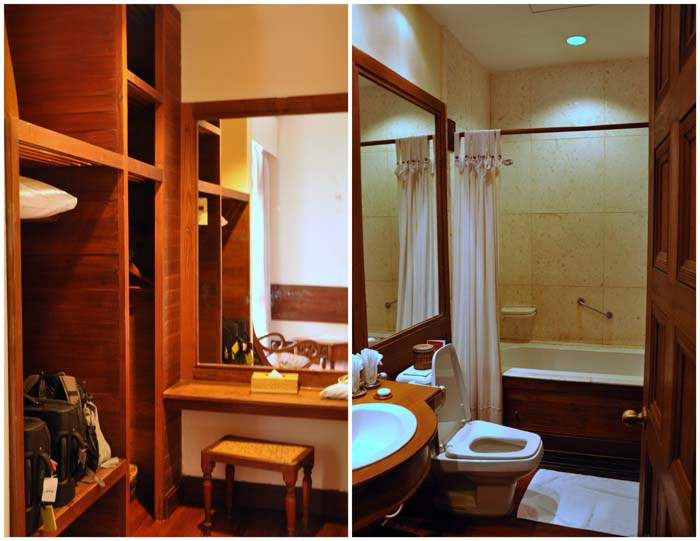 Our major disappointment during our stay was that the pool was closed for renovations. On our second day there, they sent us by horse carriage to a nearby hotel, the Aye Yar River View Resort, which granted us pool access. The trip by horse cemented the fact that we’d made the right choice to hire a driver. While quaint, it was the most uncomfortable way to travel, even for 10 minutes. I can’t imagine doing it all day. The hotel looked nice, but it certainly wasn’t within walking distance of town.

The hotel offers several trips and tours, none of which we did, especially the one on the boat:

Breakfast had a lot of choices but we avoided lunch and dinner at the hotel because it seemed substantially more expensive than the local restaurants.

On our first day, our driver brought us to lunch at the Golden Myanmar restaurant which happens to be very close to the hotel. It’s a large place and seemed to cater mostly to tourists. The food was typical Burmese with many small dishes, some vegetables, some curried meats, rice, of course, and several pickled condiments (see photo at top of post). It was a little difficult to determine what everything was, but I think the goat curry was the best of it. Lunch was 10,000 kyat (about $7.50).

One night we ate at the restaurant next door to the hotel, called Sarabha 2. The food was decent, though too dark for photos of the Myanmar Beer and couple of stir fries with rice we ate. On our second day we had lunch at the well known vegetarian restaurant called Be Kind to Animals The Moon. There are several copy cat places right across the street so make sure you go to the original, pictured below. For lunch we had several refreshing Limeades, eggplant curry and crispy fried spring rolls. Everything was delicious. Lunch was 15,000 kyat (about $11) for the two of us.

Next up…Nobody warned me about the bats…

Getting from Siem Reap to Burma, an Airport Hotel, and Yangon Airways