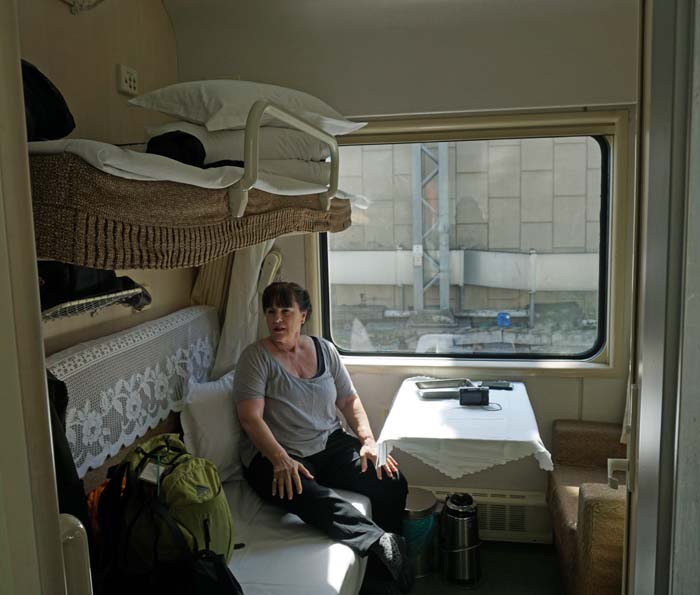 After our morning in Hong Kong, we got a 2PM checkout from the hotel and took a taxi (42 HK$) to Hong Ham station for our 3:15PM departure.
At the station, we exchanged our remaining Hong Kong dollars for Chinese Yuan as that is all that can be used on the train (no credit cards either). The waiting area was a study in chaos and once the gate opened there was a bit of a mad rush to get to the train.
Our tickets were for a 2 berth “deluxe soft sleeper” and cost us 935 HK$ each (about $120 US). The train had 12 train cars with #12 being the dining car and #11 the deluxe soft sleeper. After that there were 2 cars with 4 berth soft sleepers. The rest had some 6 berth carriages and then I think there may have been a few with seats only but I did not see them.
Below is the hallway of our carriage, leading to our compartment. Unlike what I’ve seen in some european trains, there are no jump seats in the hallway. There’s no smoking allowed on the train, but people smoke in between the carriages and so it smells like cigarettes almost everywhere anyway.
Our compartment was a study in beige and lace. It felt surprisingly spacious with a large picture window and a comfortable chair and table with polyester tablecloth opposite the bunks. It had its own private bathroom with toilet and sink, no shower.

The beds come with a bottom sheet, duvet with cover, and one pillow and they are ROCK HARD. The top bunk is about 4″ narrower than bottom bunk. In order to get to the top bunk one has to step on the bottom bunk, step on a small ledge coming out from the wall and then hoist yourself up. It’s a bit awkward. I took the top bunk.

Under the table is one electrical outlet with Chinese and HK outlets, so you can charge electronics if you need to. Small TV’s overlooked every bed, but either they don’t work or we could not figure them out. The space above door is ample for storage but we were able to fit our bags under lower bunk. The room also included a trash can, hot water thermos, and a safe built into the wall cabinet behind the chair.

TIP:
Bring cups for drinking (the wine you bring for example, ahem), for mixing up oatmeal, instant coffee, etc. Bring food, snacks, water and other drinks. The only drinks available in the dining car are Coke, Budweiser, and water. There was no Chinese beer, what is that about? I’d like to know how much Budweiser paid and who’s pockets they lined for that concession.

The scenery was interesting but mostly city after city, big buildings after big buildings as we rolled out of Hong Kong and until it got dark. It never really felt like we were ever out of a city.

The train stopped several times throughout the night for various reasons, and took on water at least twice, but I don’t think they allow you to get off.

View from train is mixed; lots of urban buildings, apartment blocks, factories and some farmland (but not as much as expected). There seemed to be a lot of concrete rubble every where, to the point where they looked like “rubble farms” spouting out of the earth. This remains a mystery to me. Why tear things down and then just leave it there?

In the morning we went to the dining car for breakfast. The car is small, 10 tables of 4, and 2 of the tables seemed to be reserved for crew.
There were three breakfast choices; seafood noodle soup, congee, and “western breakfast” which was two slices of soft bread with fried eggs made into a sandwich and a paper cup of sweetened instant coffee for 20 CNY or $3.25. I probably should have had the congee but I opted for the Western breakfast and it was lackluster to say the least. Perhaps the dinner options are better?
Pretty soon we were pulling into Shanghai, about 20 hours after we had departed. It was a fun and affordable way to make the journey and I’d definitely do it again.

A Goodbye to Hong Kong with French Toast, Noodles, and Dim Sum