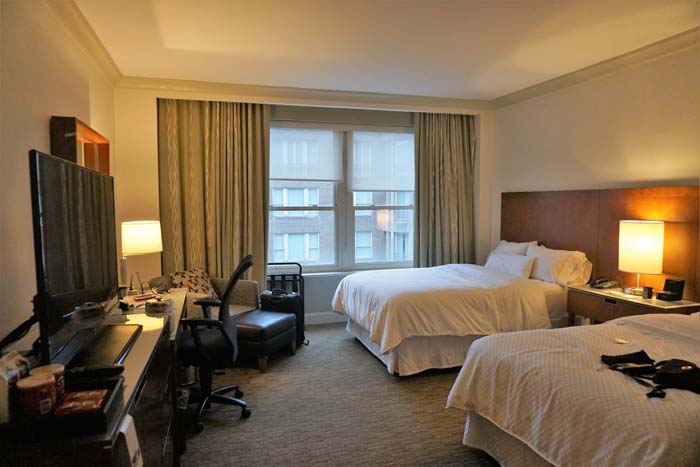 Upon arrival on the train from Chicago to Washington DC we took the Circulator bus to our hotel. It was a bit of a challenge finding the bus stop the train station, but it was worth it. For only $1 and a walk of a few blocks, we easily made it to our next hotel, the Westin Georgetown.

This hotel isn’t in Georgetown central, more like on the Eastern edge of it, but it’s fairly central for sightseeing, about a one-mile walk to the Lincoln Memorial. We had an SPG room with no additional perks; no breakfast, no view, and there’s no Lounge in the hotel. The room is large and there’s a HUGE bathroom with separate shower and toilet stall. The beds were comfortable. I wasn’t wowed, but it was fine for the price (cash plus points).

By the time we got settled, it was a bit late and we had a hard time finding a place for lunch nearby at 2:30 in the afternoon. We ended up at Founding Farmers and had a very good, but filling, lunch of egg salad sandwich and grilled cheese and soup.

For dinner, we met a friend, Beth, for Ethiopian food at Keren Restaurant in the area between Dupont Circle and Adams Morgan neighborhoods. I wish I’d had more of an appetite because it was really tasty and that Ethiopian beer was delicious too. But we had a wonderful time talking travel and finally meeting in person after knowing each other for so long online.

The next day we were up and out early in the morning to do some sightseeing. From the hotel, we walked to the Lincoln Memorial, Vietnam Memorial, and African American Museum (amazing, overwhelming, more on this later). Afterward, we had lunch at Woodward Table which was mediocre at best. Mom’s lobster bisque was ok, but my  “super greens” salad was bland, and the salmon I had added to it turned out to be a minuscule portion.

After lunch and a visit to the Renwick Gallery, we met up with our friend Cathy at the bar in the Michelin starred Blue Duck Tavern restaurant which happens to be in the Hyatt hotel, right across the street from our hotel.

My cocktail, called the Black Beauty, had Rye, house-made amaro, and Blood orange and mom’s Painted Elephant with whiskey, fig, fennel, and yuzu were just what the doctor ordered after a long day of sightseeing. As were the “fries”, which were little bricks of crispy fried potatoes with a creamy center, served with a spicy aioli sauce.

For dinner, we walked into Georgetown proper to the French restaurant, La Chaumiere. We had a charcuterie platter, a couple of salads and some house-made pate. The classic French food was fine, but the most amusing part of the evening was eavesdropping on the table of 6 next to us who were obviously having a business dinner and arguing politics, all while eating steak and drinking several $300 bottles of Château Cos D’Estournel. I didn’t have the heart to tell the middle-aged overweight blowhard conservative (a walking cliche if there ever was one, he looked exactly as you might picture) sitting next to me that his “sensitive son” was probably never going to be what he expected and he should learn to love him as he is. Sigh.

Friday’s lunch was at the Jose Andres restaurant Zaytinya, after spending the morning of Veteran’s day weekend checking out the Tidal Basin, MLK Memorial, Korean War Memorial, and American History Museum. The food here was outstanding. We sat at the bar because we had no reservation and service was excellent.  We ordered three small plates to share; lamb with tabbouleh, zucchini and cheese patties with caper yogurt, and crispy eggplant patties with roasted garlic yogurt plus a couple of glasses of rose wine. A perfect lunch.

For our last night, we took an Uber to the Alexandria Sheraton Suites which is very convenient to Reagan airport (they offer a free airport shuttle as well). They had no club room available but they gave us lounge access. The room itself was spacious. Given that all rooms in the hotel are “suites”, it had a separate sitting area with sofa, desk, kitchenette, etc. Morning breakfast in the lounge was fine but the evening hors d’oeurves were so underwhelming and not particularly appetizing that we did not stay.

The entire time we were in DC it was very cold and when we got to Alexandria, it was 29 degrees Fahrenheit outside! The hotel is a bit of a walk from the main artery of King Street but we hiked down there anyway and checked out the shops until we got too cold and had to walk back. It’s a very cute area and we returned the next day for more.

Our last dinner was at the nearby Mason Social which I selected because it was close to the hotel and had good reviews. I had a southwest salad with a flat iron steak and it was perfectly acceptable. Mom’s “Jambalaya pasta” was so spicy she could not eat it. They sent out a different pasta which tasted like BBQ sauce even though it was supposed to be just tomato. A manager came to check on the table and generously took my mother’s pasta off the check and brought her ice cream, which was very much appreciated.

Note: As always, we don’t accept any sponsored posts and pay for all meals and accommodations ourselves.