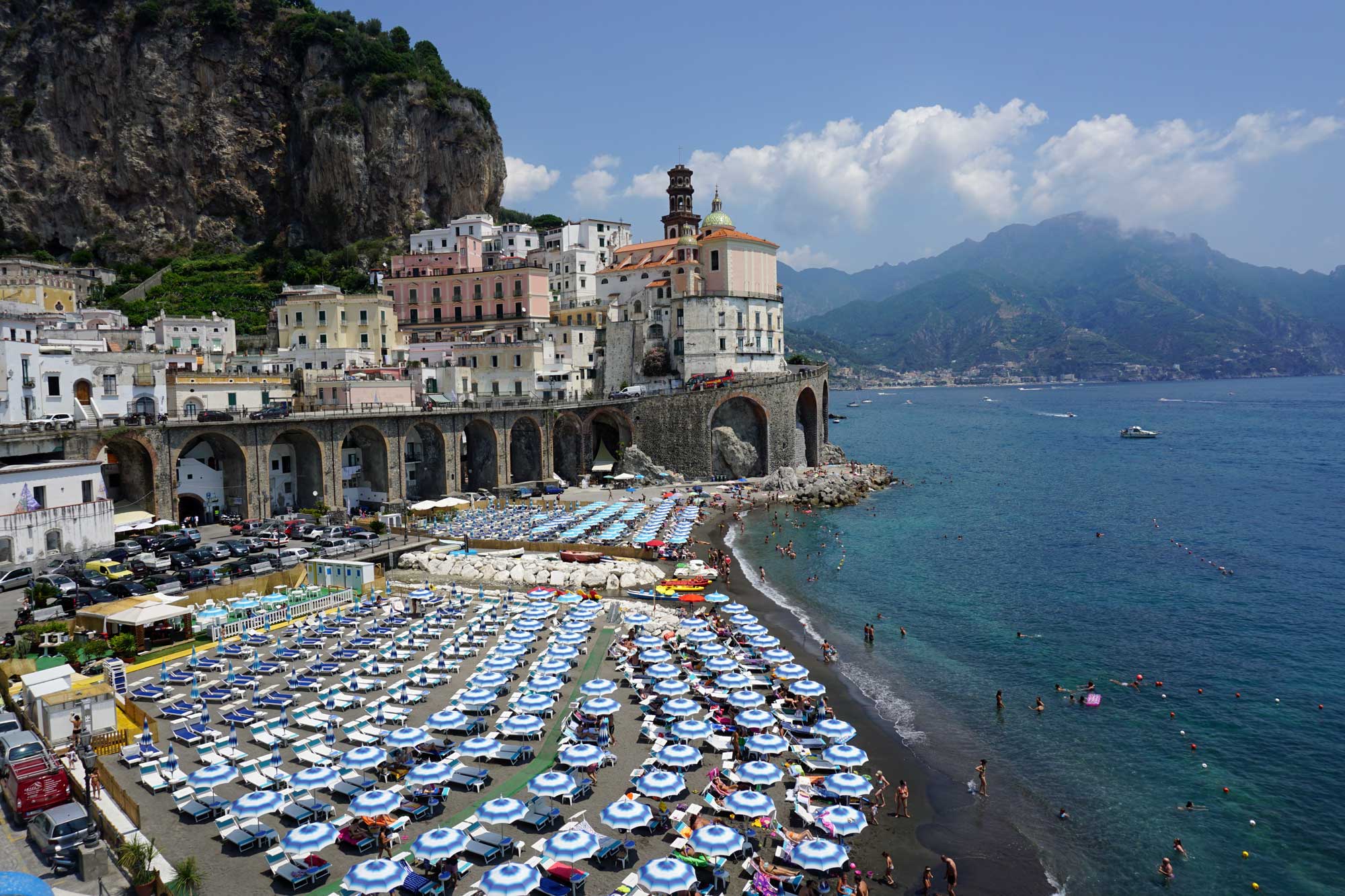 While staying in Conca dei Marini we had limited choice for where to eat. We ended up in the hotel’s dining room for two of our four dinners, mostly because we couldn’t be bothered to walk or drive anywhere (the drawback of staying somewhere so isolated). It was overpriced and mediocre. However, when we did go out, we some lovely dinners, as well as a nice lunch in Positano and one in Cetara.

One of Conca dei Marini’s charms is its piccolo fishing village which can only be reached by boat or by walking down (and then back up) about 300 stairs. One night we did just that, choosing one of the three restaurants down there at random.

This was the view of the cove from our table, overlooking the beach, walkway and tiny wooden pier where boats dropped tourists coming in just for dinner from the surrounding towns.

We ended up eating at Ristorante Risorgimento  (Marina di Conca,42 | sulla spiaggia di Conca dei Marini, 84010 Conca dei Marini, Italy). Still crazy hot at about 8 pm, we had a chilled bottle of local white wine, a Falanghina, a varietal grown in the area. Of course, we had to order seafood; a mixed antipasto of marinated white anchovies and octopus, linguine clams, and (not shown) a pasta with ragu and some grilled vegetables. The food was enjoyable but the best part was watching the boats come and go filled with tourists and the local teenagers hanging out in their little dinghies, just goofing off.

On another night we were picked up at our hotel and driven up the hillside Le Bonta del Capo (Via Primo Maggio, 14, 84010 Conca dei Marini, Italy). If you make a reservation and ask for it, the restaurant will send a car for you no charge. The food was very good, but the view was spectacular.

Our meal was as enjoyable as the view; mixed seafood antipasti (yes, again), wood-fired pizza, ravioli, and steamed clams. One thing and I will spare you the video, but there was some cheesy “entertainment” (someone with an electronic keyboard and someone singing not much better than karaoke) during our meal. But even that could not spoil things.

On one of our days on the Amalfi coast, we re-visited the town of Amalfi, mostly to find an ATM and a pharmacy where we could buy some mosquito repellant. We parked in an underground parking lot off the road between Amalfi and Atrani (Atrani is the photo at the top of the page). While in Amalfi, we walked through the lovely Romanesque and Byzantine cathedral.

If you go, make sure your shoulders are covered so you don’t have to be like the girl in the photo below and wrap a big sheet of butcher paper around yourself.

On another day, we drove to Positano in the morning and parked on one of the roads high above the town and walked down into the center. We failed to notice that parking was only for residents and ended up with a parking ticket. This ticket led to us being told several different conflicting ways to fix the problem by people at our hotel. In the end, we drove back to Positano the next day, found a helpful policewoman who led us to the tiny station in the center of town where we paid our fine in cash.
Our tip: park in the paid lot at the bottom of town.  Look for “Gennaro Di Bartolomeo – Central Parking”. Don’t risk parking on the road.

The day we were in Positano it was almost 100 degrees by 10 am and after about an hour of walking around, I was so soaked in sweat I ended up buying a sundress and changing my clothes in the public restroom near the beach. Below, me in the new sundress with a desperately needed chilled glass of rose.

Twenty years ago, we stayed in Positano on our honeymoon and have visited several times since, always eating at Buca di Bacco, so we had to eat there this time as well.  It’s located right on the water, in the hotel of the same name, above their La Pergola bar.  There’s a fantastic view from just about anywhere you sit. We started with cold drinks in La Pergola, walked around a bit more, and then later had lunch on the covered patio in the restaurant upstairs. As always, the food was tasty and beautifully prepared.

See that red building with the white arches about 2/3rds of the way up? That’s the Casa Albertina where we stayed on our honeymoon. We were going to stay there again but “our” room was booked.

I love this little car so much. #lifegoals

Around the World Pre-Trip Journal March and April 1998

Rome Restaurants; Dining and Drinking in the City