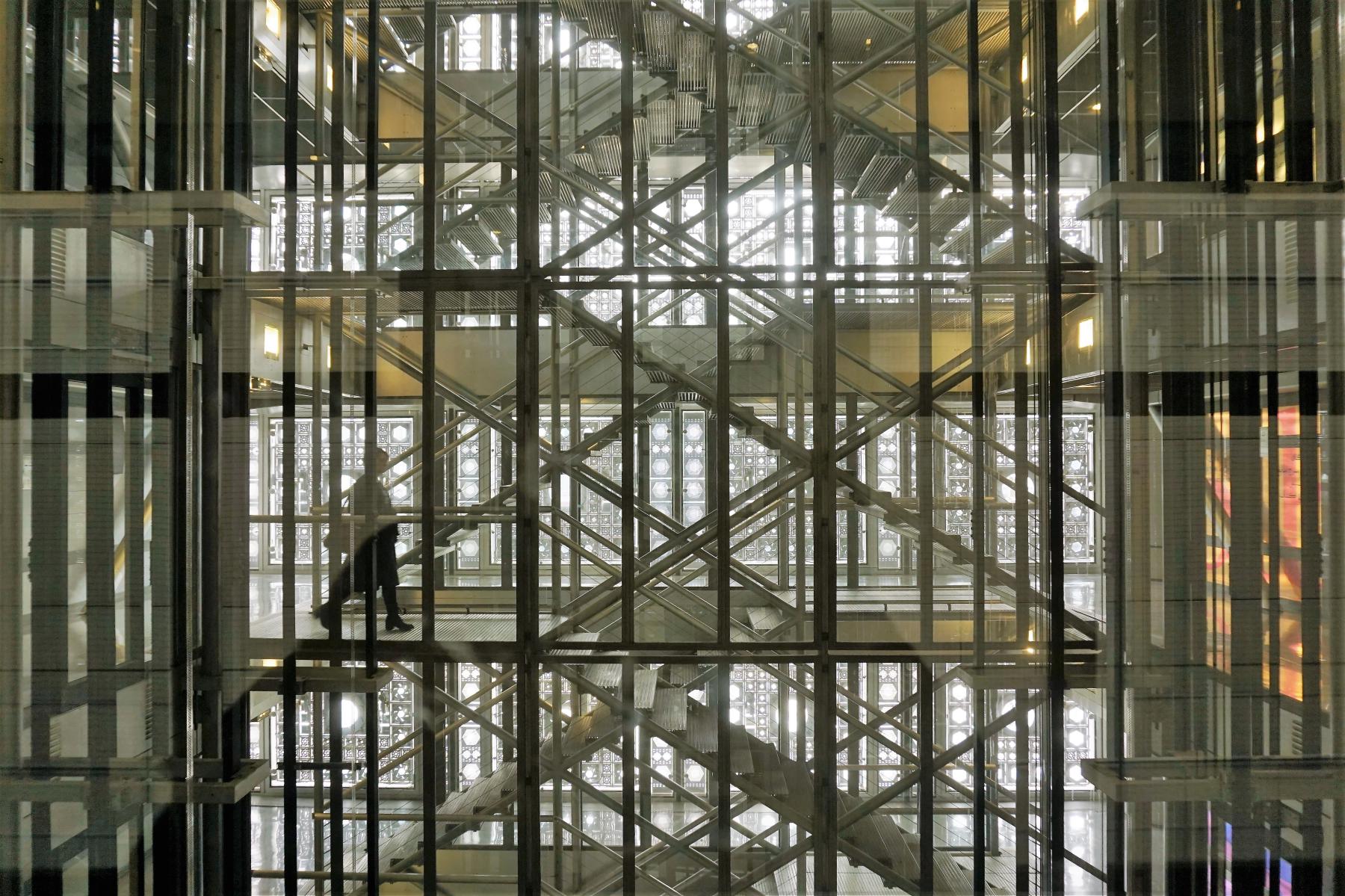 In previous posts, I’ve covered much of the sightseeing we did during our last week in Paris; the Nissim de Camondo museum, the Louvre and the d’Orsay, the Palace of Fontainebleau, etc.

In this post I’m going to share four more sights, all covered by the museum pass; the Institute du Monde Arabe, Notre Dame Cathedral, the Rodin Museum, and Sainte-Chapelle. Links to the sights official websites for hours and opening days are in each section’s header.

The Institute du Monde Arabe (the Arab World Institute) has a lovely museum inside covering the Arab world history.

I especially enjoyed seeing all the beautifully woven textiles and different types of clothing.

The back facade of the building (below and the post’s top image, is a solid wall of glass and metal screen. The metal moves with the sun, opening and closing the aperatures to let light in or keep it out. This mimics the filtered light created by carved wood screens over windows common in Islamic archetecture.

Notre Dame Cathedral is centered in the heart of Paris, on the Ille de la Cite. It’s free to enter the cathedral and the Museum Pass covers entry to climb to the top of the towers as well as the museum in the crypt below. On this trip, we visited the crypt for the first time (the entrance is outside in the square) and of course, walked through the church (for which there was quite a long line to get through security). Unfortunately, no photos are allowed below in the crypt, but it was pretty cool, especially being able to see the foundations of the cathedral.

Behind the church is a lovely park. It’s a nice place to sit and rest away from the crowded square out front. There’s also a small public restroom there that’s free. There’s a larger public restroom underground in the square in front of Notre Dame and it’s often crowded. To use it, there’s a 1 euro charge.

The original version of the Thinker was called the Poet and sits atop the bronze doors called “The Gates of Hell” (see more on these below). When the gates were exhibited, the Poet was so popular Rodin created a larger version whihc became famous on its own.

Above, upper right, Danaid” in marble. Lower right is the old wavy glass of the muesum’s windows. Left, “The Walking Man” in bronze.

In the garden of the museum is a bronze doorway called “The Gates of Hell”. At the top is a small version of The Thinker. On the museums’s website is a page with details of the more than 250 images on the sculpure. There are so many mythological figures represented, and they do a much better job than I can here.
According to the museum’s web page, Rodin  “received the commission in 1880 for a “decorative portal” embellished with “bas-reliefs representing Dante’s Divine Comedy”, as described in the ministerial order. “

While there, we had lunch in the museum’s cafe which is set out in the garden off to the side. We had a delicious and resonably priced soup and salad.

It might give you “church overload” but in terms of locatation and convenience, seeing Notre Dame and Sainte Chapelle on the same day makes sense considering how close they are.

La Sainte Chapelle was the royal “Holy Chapel” to French kings from the 12th through 14th centuries when the royal palace was located on the Ille de la Cite. The Gothic chapel was built to hold many religious relics, most notably the crown of thorns which now resides in Notre Dame.

The architecture may be impressive but it’s the 15 huge stained glass windows and giant rose windows that most visitors come to see. Most of the images in the windows represent stories from both the old and new testaments of the bible.

Note; I have no affiliation with the Paris Museum Pass. I purchased the ones we used and I just think it’s a great value if you are interested in the sights it covers.

Six of Our Favorite Meals From a Week In Paris