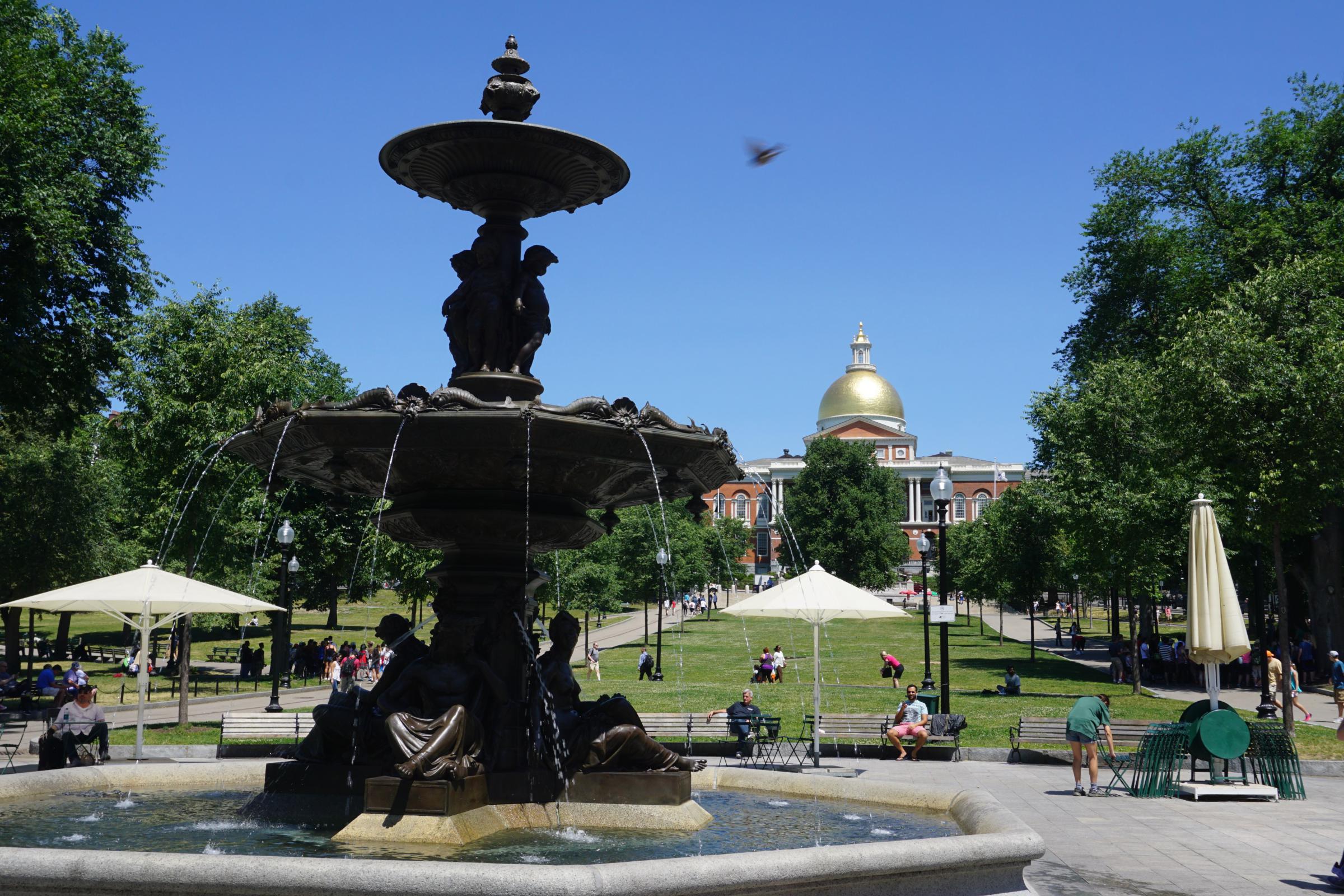 We’ve been to Boston a couple of times in the last few years to visit friends and family. Below are some of the favorite things we did, places we stayed, and the wonderful food we enjoyed in the Downtown, Back Bay, Waterfront and North End neighborhoods.

Ok, all of Boston is “historic”, right? But as someone who doesn’t live there, there, these are some of the sights in the center we enjoyed. If you have time, check out the Freedom Trail. We did not have time to do all of it, but enjoyed parts of it around the city.

One of the main Freedom Trail sights is King’s Chapel, the location of which has over 330 years of history.

This is one of the oldest churches in the United States. The downstairs pews were private boxes all owned by families and built to help keep people warm in the cold winter months. This is still an active Unitarian Church.

On the edge of the Boston Common, a giant public park, you’ll find the Brewer Fountain and the Massachusetts Statehouse with its golden dome.
The Common was used for both grazing cows and for public hangings into the 1800’s.

Right next to the Boston Common is the Boston Public Garden which feels like a connected extension to the Common. This is the first public botanical garden in the United States.

garden you’ll find a large pond, fountains, a bridge, all manner of trees and flowering plants, and lots of birds, You’ll also find the famous brass sculpture Make Way For Ducklings, a statue of George Washington, and a monument to ether (yes, the anesthesia).

The Granary Burying Ground, near the Boston Common, dates back to 1660 and is named after the grain storage building that was at one time located next to it. Most notable among those buried here are Paul Revere and Samuel Adams. The headstones are at once fascinating and a little creepy. According to the Heritage Trail website, the early Puritans frowned upon religious imagery, so one of the more popular motifs on the tombstones was “the “Soul Effigy,” a skull or “death’s head” with a wing on each side that was a representation of the soul flying to heaven after death” shown below.

On one of our stays in Boston, we spent two nights at the Sheraton Boston in Back Bay. It’s a perfectly fine hotel and our room had a nice view of the Charles River. It was convenient to get there via the Logan Express from the airport and there’s a car rental place on site which was also useful to us.

Within walking distance of the hotel is the Select Oyster Bar where we had a delicious meal of fresh local oysters, hamachi , white anchovies on toasted bread and steamed clams.

Boston’s Back Bay has some amazing historical buildings centered around Copley Square which include Trinity Church and the Boston Public Library, both below.

The area also is home to many 19th century brownstone apartment buildings and houses. One of the most beautiful is the Burrage House, a Gothic inspired building complete with gargoyles, built in 1899.

Boston’s Waterfront area has some interesting sights, spanning from Chinatown in the south up to the start of the North End and Little Italy. It includes the Boston Harbor area and the Rose Kennedy Parkway which is a gorgeous walking path along the waterfront.

Boston’s Chinatown has been home to a Chinese population since the but it really grew in the after the Chinese Exclusion Act was lifted in 1943. The population of the area is still 70% Asian who are mostly Chinese and Vietnamese. Of course, the area is filled with markets and restaurants and if you are at all interested in Chinese cuisine, I highly recommend taking one of my friend Jacqueline Church’s fun food tours of Boston’s Chinatown.

While in the area, we spent a couple of nights at the Westin Boston Waterfront. This location is convenient to the convention center, but for us, it was nice to see a different part of the city and especially useful on our return to the airport as was just walked across the street to the World Trade Center stop for the Silver Line to Logan Airport.

On one night there we met up with our friend Jackie to have drinks and snacks at “Drink” a place which hand crafts cocktails to your desires. They make a pretty mean Negroni.

The North end of Boston is home to Little Italy as well as many historical sights on the Freedom Trail.

One of my favorite places was the historical home of Paul Revere. No photos are allowed inside so I can’t show you how people lived back then but trust me, it’s worth the trip. You can see more about the house here and also learn what really happened on the night of his historic fateful ride.

Of course, we had to eat Italian food while there (more than once). On our very last day, before going to the airport, we managed to have dinner with an elementary school friend of David’s, Seth, and his daughter, at Panza where the food and setting were lovely.

“Leave the gun, take the cannoli.” We managed to do our own taste test on two of the North End’s most famous places serving cannoli; Mike Pastry and Maria’s Pastry Shop. I’ll leave it up to you to determine which is best, but for me, I liked the filling from one and the shells from the other.

Have you been to Boston? Leave me a comment and let me know some of your favorite places!