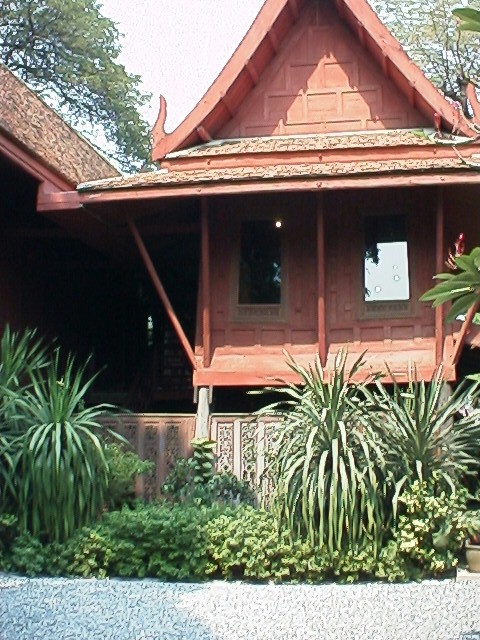 Note from 20 years in the future; in 1998 and 1999 we used Bangkok as a “home base” for our travels around Asia. There will be several installments covering our time in this amazing city. This is Part 1.

At the train station in Chumphon, we met three really nice guys from New Zealand that had also been on the boat from Koh Tao, Paddy, Thomas, and Tony. They were right next to us on the train and when we got into Bangkok we shared a taxi pick up to Khao San Road, the backpacker’s mecca of Bangkok.

When we got there we all went off in search of a guest house to stay in and discovered something that the guidebooks fail to tell you; there are no rooms available before 12:00. All the guesthouses require their guests to pay each day, in advance, and to check out by 12 PM. Every single one we went to was full and had no idea if they would have rooms until later. We sat and had breakfast and then went out again to look at rooms.

I was appalled at the poor quality for the price. We had much nicer, cleaner, basic rooms for much less in Bali, Penang, and Koh Tao. It’s no wonder that everyone hangs out in the lobbies of these hotels; the rooms are dreary, windowless, and filthy. We finally settled on a twin room at the My House Guest House which had been recommended to us. The room actually had its own bathroom but no other redeeming quality. The sheets on the beds were so filthy I had to lay my sarong on mine. David woke up with bed bug bites. We then accepted that we are soft and moved to a nicer hotel.

Khao San Road does have some good things going for it. It is central to many of the sights, including the river. Anything that the traveler needs is readily available; travel agents, cheap clothing, tailors, western and Thai food, cheap internet and email, laundry, used bookstores and good street food.
Fortunately, the huge number of guesthouses in competition has kept the prices low (150-300 B).
Unfortunately, the sheer number of undiscriminating people looking for a cheap room, no matter what, has kept the quality low. The other problem with Khao San Road is that because so much is available there, most people never leave it. Everyone complains about how awful Bangkok is, but they never really see it outside the tourist ghetto.

There is a road, Chakra Phong, that runs perpendicular to Khao San Road, that is filled with street vendors every morning, selling all matter of edible delights, most of which are completely unidentifiable to me. But amazing to look at. There is also a large supermarket there, if needed.

We had a couple of excellent dinners with our friends from NZ down the street from their guesthouse outside of the Khao San area. On  Phra Athit, a road that borders the river, is a teeny, tiny alleyway. In this alley works a woman who sets up her kitchen at night. She has four small gas burners, two woks and two pots of water boiling, a chopping block, and a table laden with ice and her ingredients; fish, chicken, prawns, pork, vegetables. Plastic tables and chairs are set on the sidewalk. This woman is one of the most amazing cooks I’ve ever seen; she filled me with awe and admiration. She speaks absolutely no English, but has a menu (with no prices) that has Thai and English. Between pantomime, pointing to ingredients, and the menu, the five of us were able to order. Not only does she work alone, but she’s skilled and fast, especially given her limited facilities. We had roasted prawns, very spicy prawn soup, crab, chicken curry, vegetables, rice and cokes. A feast for five people for 300 B total!

We’re staying at a hotel called Tarntawan Hotel that is in the center of Bangkok and has allowed us to see more of the city. We’ve done a lot of walking, riding, taxis, and . The hotel is very nice and offers everything a business class hotel should. It’s a fairly small hotel owned by Swiss and New Zealand and they give a lot of personalized attention. we really can’t afford to stay here long.

I’m really liking Bangkok now that we’re getting used to it. I’ve always liked big cities having grown up in Los Angeles I feel right at home. Yesterday we went to the Bangkok Dusit Zoo with the guys from New Zealand. It’s a decent zoo in a large park like setting with a lake in the center. Unfortunately, the cages are a bit small for the larger animals and the big cats, for example, looked thin and unexercised. But it is a nice place to escape the pollution of the city for a while.

As we were leaving there was a man near the entrance with a young monkey. I don’t think it lived in the zoo, I think it belonged to the man. Anyway, he let each of us take a turn holding it and when he tried to take it away from me, the little bugger bit me (the monkey, not the man)! As I was standing there, certain that I was going to die from a dozen unknown, hard to diagnosis, diseases that are passed from monkeys to humans, he tried to tell me that his monkey just doesn’t like women. Yeah, right…

Kristina’s Notes: Thai Transportation
Bangkok is a very large city, extremely spread out, and sometimes distances can be too far to walk.
So, here’s a note about local transportation;
First, there are the tuk-tuks, which are three-wheeled motorcycles with a covered seat on the back for passengers. Tuk-tuk drivers will constantly stop and ask you if you want a ride, negotiate the fare carefully. If they agree to an absurdly low fair they will probably take you where you don’t want to go, like their cousin’s tailor shop.
We’ve found that for longer distances across town the metered taxis are the best, just make sure they are using the meter. For example, when we tried to come across town from another hotel to ours, all the hotel taxis wanted at least 200 B. We even had metered taxis stop who refused to use a meter and told us it would cost 200 B. then we got into a metered taxi that took us across town for only 78 B. The tuk-tuks are a wild ride, fun, and sometimes faster, but for longer distances taxis are a better value, air-conditioned, and keep you out of the pollution and exhaust fumes of the traffic.
The riverboats marked “Express River Boat” are the best value of all. We went a distance up the river that was the same as going across town for only 7 B. This is good only, of course, if where you’re headed is near the river. But it’s also a really neat way to see the city. Beware however of the touts selling “River Tours” that hang out near the boat landings. Just tell them you want a “water taxi”. Get any city map and it will show where the boat landings are. Then, at each landing there is a map, in Thai and in English, that shows each stop. Remember where you want to get off and buy the ticket on the boat; just tell the ticket taker the name of the stop.

We’re having an absolutely horrid time getting connected to our server via iPass. We have had no problems until now, until Thailand. We’ve been sending emails back and forth to our ISP to no avail. If we can’t make it work, we will have to wait until we get to Hong Kong to post the journals and get much of our email. Fortunately, we also have a Hotmail account which allows us to still communicate when necessary.

Our other current problem is our indecision regarding what to do next. We are going to leave tomorrow and head up to Chiangmai for a week. After that, we’d like to go to Cambodia and Vietnam but after looking at a projected budget for it, it looks like we may not be able to afford it. Most expensive are the necessary flights. Traveling overland in Cambodia is considered unsafe and unwise, and not really feasible from Thailand. So one must fly from at least Bangkok to Phnom Penh.
Then, we’ve been told we could either fly to Siem Reap (where Angkor Wat is) or take a boat. The boat supposedly costs $25 each way, but this is an unknown and (as we’ve experienced quite often) could be more. The RT flight costs $113. Is it worth it? We don’t know, we haven’t met anyone that’s come back from there very recently.
Then, we would probably fly to Saigon, but we’d also heard that there is a bus from Phnom Penh, but this is another uncertainty. The next choice is whether or not to fly back from Saigon (cheaper) or travel by train to Hanoi (1700 km) and then fly back from there. Too many decisions! This trip could cost us anywhere from $244 to $454 US, per person, just for airfare, depending on how we do it. Then add the cost of visas, food, lodging, train in Vietnam, etc. and it could be a very costly couple of weeks.

Or, we could go to Nepal for a month before Xmas and then come back to Bangkok to catch our flight to Hong Kong. If we did this we could then leave Bangkok at the end of January and head straight for Cairo, skipping India altogether. Otherwise to go anywhere west from Nepal requires a stop in India. We have always planned on going to India, but we have heard nothing but horror stories from other travelers coming from there recently.

All these choices and decisions are a direct result of having not planned the entire trip before we left. Had we booked every segment we would have been locked into quite a bit, but then at least we’d know what we’re doing.

We’ve also just found out from a couple of different travel agents here in Bangkok, that, as US citizens,  we would not be allowed to leave the Bangkok airport without having an onward ticket back to the US. Even though we have many more stops to go before we go home, we still have to have a ticket! We had not planned on buying this ticket until we got to Europe where it would be cheaper. We have emailed our travel agent back home to find out if this is true.