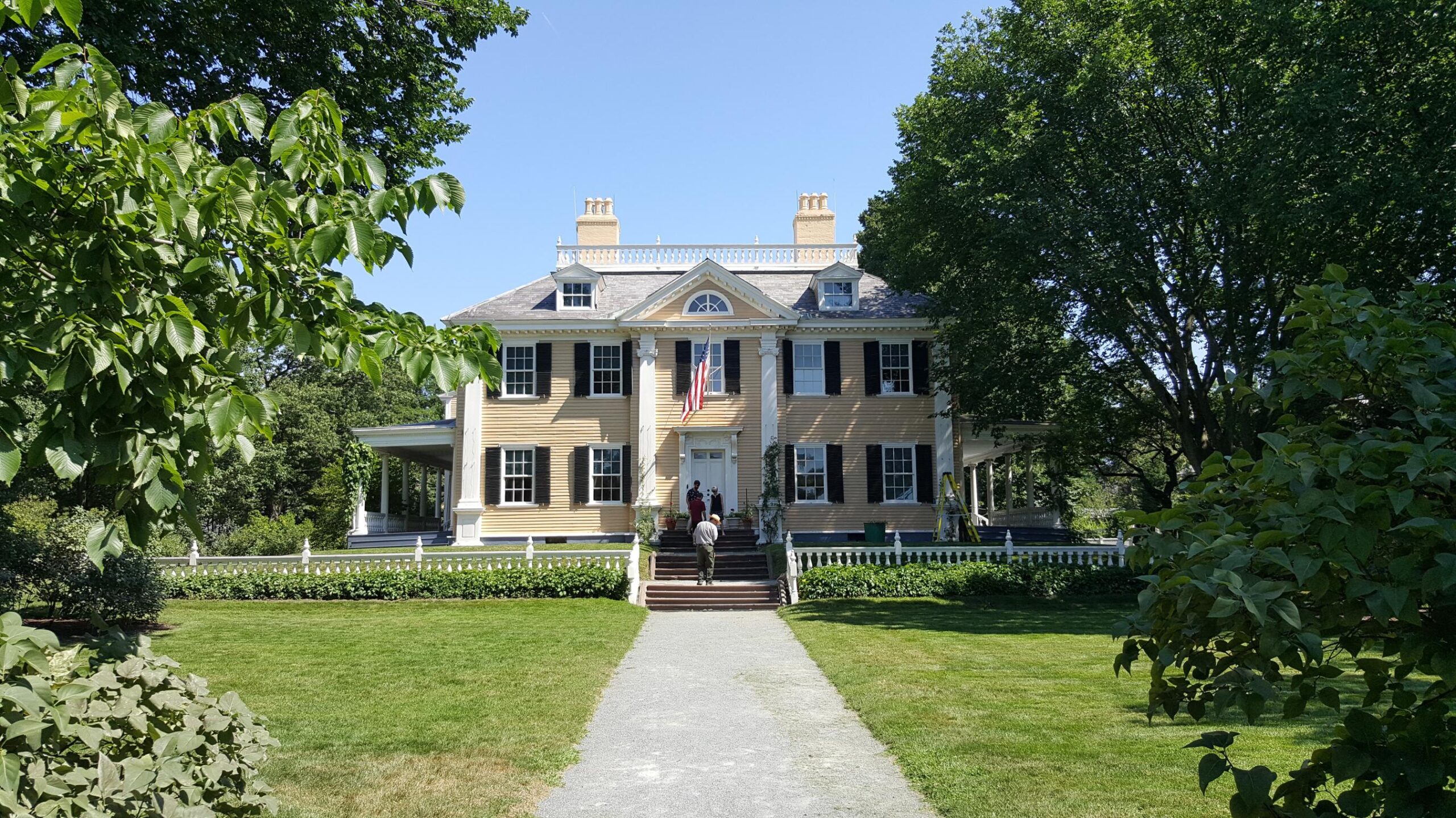 A couple of summers ago, on our way to Scotland, we stopped to visit family on the East Coast which included a few days in Maine and 24 hours in Cambridge Massachusetts. While there we had a couple of meals and squeezed in a visit to the Longfellow House Museum which has a dual claim to fame; it was the headquarters for George Washington during the siege of Boston in the Revolutionary War and the home of the famous 19th Century poet, Henry W. Longfellow.

Originally built in 1759, the Vassall-Craigie-Longfellow House has a 200-year history. Visits to the house and gardens are free, but to see the inside of the house, you must tour with a guide from the National Park Service which manages the property. Basic info for visiting can be found on this page. The house is only open seasonally and is closed in the winter.

Our guide was a young, newly minted forest ranger on her first National Park Service assignment. She was charming and passionate about the history of the house and its former inhabitants and really helped to make the tour so fascinating. She really made the house come alive with stories about the people who lived there, most notably for me, Fanny Longfellow, who was well educated and kept travel journals of her Grand European Tour.

George Washing most likely worked from the room above which was later Longfellow’s study. Washington took over the house in July of 1775 and spent 7 months there, after the original owners, the Vassalls, had fled the coming Revolution in the preceding year.

Henry Longfellow originally rented out two rooms in the house when he was a young professor at Harvard in the late 1830’s. After he married his wife Fanny Appleton, her father purchased the house for them as a wedding gift.

Where to Eat and Stay in Cambridge MA

We enjoyed a few good meals while in Cambridge. For lunch, we went to the Hourly Oyster House which is located very close to Harvard yard and easy walking distance from the Longfellow House.

We had a dozen oysters, the goat cheese and grilled vegetable sandwich and the fried chicken sandwich, all delicious.

We also went to Posto, where we had freshly made pasta and gnocchi and were able to catch up with family over dinner. Below, the gnocchi with beef short ribs was very satisfying.

If you’re looking for a great breakfast (or lunch) sandwich, check out the Hi-Rise Bread Company on Massachusetts Avenue.

We spent one night at the Sheraton Commander, located right on the edge of the historic Cambridge Commons. This hotel is also an easy walk to the Longfellow house. We had a lovely large corner room overlooking the Commons.

Have you been here? Would you like to go?
Leave me a comment at the bottom and let me know!

Around the World 1998; Northern Thailand