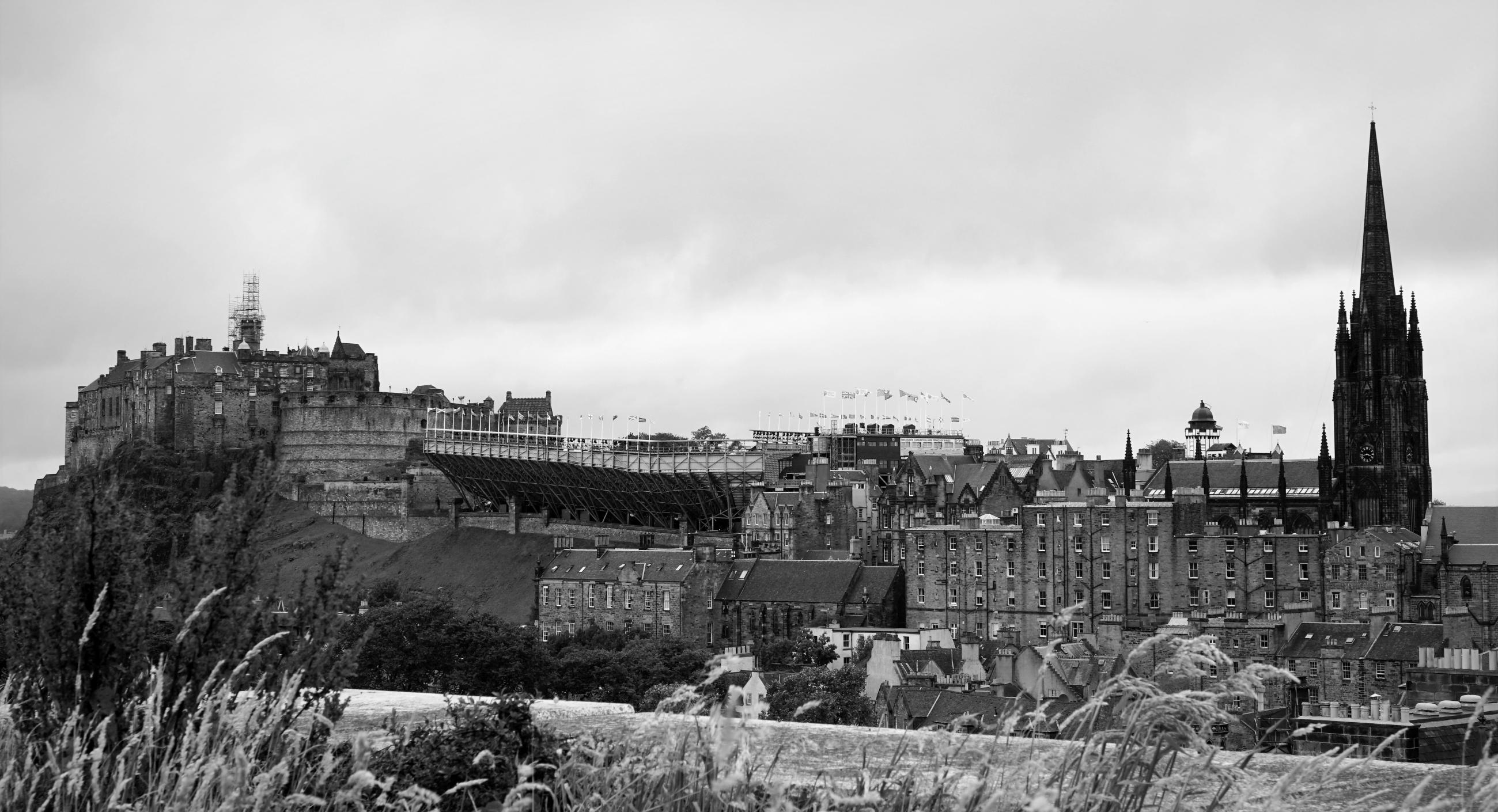 Edinburgh is the perfect introduction to Scotland, blending medieval history and the modern world into a compact walkable city perfect for a short visit. It’s so special, the “Old Town” and the “New Town” are combined into a single UNESCO World Heritage Site. We had 36 hours in Edinburgh and made the most of every minute.
Like many other travelers, Edinburgh was the first stop on our journey through Scotland. Partly because we were there during the summer Fringe Festival (when accommodation is scarce and expensive) and partly because we wanted to see so many of the other places Scotland has to offer, we only had about a day and a half to explore the city.

How to Spend 36 Hours in Edinburgh- What to See and Do:

We started with a walk down the Royal Mil,e which because of the Fringe Festival, was closed in sections to auto traffic and absolutely with people.  The Royal Mile extends from Edinburgh Castle down to the Palace of Holyrood House. It’s an easy downhill walk if you start at the castle.
TIP: There’s an entire website dedicated to exploring what can be found on the Royal mile, check out Royal-Mile.com.

Along the way, make sure to stop and peek into the “closes” or small alleyways, you never know what you will find.
The photo at the top of the post is the view from Advocate’s Close which dates back to 1544 and shows the tallest monument to a writer in the world, the Scott Monument.

Walk through the narrow arch of Lady Stair’s Close and you will find the home of the Writer’s Museum, once a 17th century townhouse.

Everyone says to visit the “Whiskey Experience” at the start of the Royal Mile, but if you want a more personalized experience, stop in to Cadenhead’s Whiskey Shop where you can try and buy.

When you reach the end of the Royal Mile, you will be at the Palace of Holyrood House, home to the royal family when they are in Edinburgh. Opposite it is the strikingly modern Parliament building and to your right, you will see a large hill known as Arthur’s Seat.

We’d wanted to both see the palace and hike to the top of Arthur’s seat, the highest point overlooking Edinburgh, but found ourselves too short on time to do either after an unfortunate experience where we waited an hour for a lunch that never came.

Edinburgh Castle is the heart of the town and can be seen from just about anywhere, sitting high atop the hill overlooking the Kingdom of Fife across the water.

It was at the entrance to the castle that we purchased Scotland’s “Explorer Pass” which allowed us entry to over 70 different historic sites in Scotland. At the time it covered 3 days in a 5 day period so we had to carefully plot out where and when to use it for maximum value, but now it looks like it simply covers 5 days or 14 days. We found it to be a good value, covering high ticket sites like Edinburg Castle and Stirling Castle.

“Those are some big balls”
“That’s what she said.”
The Mons Meg cannon, the mother of all guns in the middle ages.

The Royal Edinburgh Military Tattoo (only in August)

No, this is not a tattoo festival filled with people getting Celtic ink. The Royal Edinburgh Military Tattoo is a true spectacle of military bands and performers (mostly from Scotland but also from other parts of the world), fireworks, music visual effects. We saw bands from India, Japan and the US as well. It’s held on the grounds outside the Edinburgh Castle and lasts for three weeks, with about 6000 people per night witnessing the event come rain or shine.

The Tattoo is very popular and the best seats sell out on the day the tickets go on sale, typically in early December. I happened to see a post about it online the day they went on sale and by the time I bought tickets for our date in August that same day, they were almost sold out.

In the end, I booked section 2, row U, which was midway up the seating and close to the castle end of the parade ground. These seats were absolutely fine. It was not at all necessary to be at the end near the box/expensive seats. We’d heard each night was sold out and from what we could see, the arena was 100% full. The event started promptly at 9PM, as advertised. We arrived at around 8:45 and there was a bit of a queue to get in but it moved fast.
Tip: there are toilets under the seating area for both men and women. Don’t wait in the first line you see near the entrance. As you move farther in, the lines get shorter.

The spectacle was impressive. There were military bands from all over Scotland as well as the US, Japan, India, and several other locations, but it was the bagpipe regiments which were the most interesting. Unlike other US events (like sporting events) there was no food served or sold in the stands. The show lasted 90 minutes. When leaving, the stands exited in a very orderly fashion, waiting for each row to clear from the bottom before the next one could leave (this felt like it took forever).

The National Museum of Scotland

The National Museum of Scotland has everything from Scottish pre-history to fashion to science and technology.

Tip: Go up to the top floor of the museum for stunning 360 degree views of Edinburgh, including the castle.

On one of our walks around the city, we ended up going through the Prince’s Street Garden, a large park in the center of the city. It was absolutely gorgeous and offered a great view of the castle from below.

Where to Sleep in Edinburgh

The Sheraton Grand Hotel and Spa in Edinburgh

We arrived in the middle of the day and took the tram directly from the airport into the city which could not have been easier. From the tram stop, we were able to walk to our hotel, the Sheraton Grand, which I selected because we were able to pay with points. During the very popular Fringe festival, hotel prices are at their peak so this was a way to stay someplace nice without spending a fortune.

The room was a decent size with a nice bathroom, accessible from both the bed area and the hallway of the room. The frosted glass doors into the bathroom were a bit odd, however. David said the pool and sauna were amazing. There is also a spa and special thermal pool on the top floor, but this was only available for an extra fee.

The hotel is perfectly located for exploring and while they weren’t able to accommodate my request for a castle view room, they did give us the breakfast buffet which was outstanding and allowed me to try haggis for the first time (I really liked it!). Try the raised dough waffles. There are made to order egg dishes and specialty coffee like cappuccino included with the buffet if you ask your server.

One afternoon we had cocktails in the hotel’s One Square Bar and of course had to try their own proprietary “One Square Gin” which was served with fever tree tonic, a sprig of fresh thyme and a grapefruit twist. I also had a Word cocktail made with Old Tom Gin.

If you want to splash out, you can’t go wrong with this grande dame historic hotel, Balmoral.

Across from Waverley train station, this Victorian hotel opened in 1902 and is still as opulent today. It’s centrally located and if you’re a foodie, it has a Michelin starred restaurant, called Number One. If I ever win the lottery, I’d love to stay there in a suite with a fireplace and a view of the castle. The regular rooms are pretty nice too.

If you’re looking for something cheerful but cheap(er), the Grassmarket Hotel looks fun. It has a great location in the center of everything, there’s free wi-fi, and some of the rooms have a giant wall map of the city.

Where to Eat in Edinburgh

If you know anything about the farm-to-table movement or the “100 miles” movement in the food world, then you will like Forage and Chatter. We ate there on our first night in Scotland and I can say it’s in the top 5 meals we had in all of our time there, both trips. Their goal is to be seasonal and sustainable and they try to source most of the product used in the restaurant from within 100 miles.

We began the meal with complimentary “fried dough” served with pesto and homemade yogurt cheese with mushroom powder. For our appetizers, we had a liver mousse with apricot and a local Scottish salmon with fried capers.

For our we had monkfish with squid ink barley risotto and sea vegetables and a Scottish sirloin and braised short rib with mushrooms. Dessert was a chocolate ganache tart with orange. Service was excellent and I’ve since recommended Forage and Chatter to several people who have all enjoyed it as well.

Our meal at Innis & Gunn was meant to be one of convenience. It’s located about a block from the Sheraton and on the way to the castle where we were going that night for the Military Tattoo. Unfortunately, the meal took forever to come out (even though they knew we had to be at the Tattoo), and when it did, my roasted pork was cold. That said, the beer was very good, as it should be because the restaurant is linked to the brewery, and the haggis fritters were crisp and tasty. Also, the restaurant picked up our check without our saying anything once they realized what had happened. So, chalk it up to a bad day for them. I would give them another try.

We ended up eating twice at the No. 1 High Street Pub. The first time was right after we arrived and the second was after attempting to have lunch in another pub and waiting for an hour for food which never came. No. 1 has good solid pub food and of course, beer. Above are our lentil soup and beet and goat cheese salad from the first meal. The second meal was a couple of sandwiches with chips (fries) and they were perfectly fine.

Finally, if we to return to Edinburgh today, I’d love to check out two new restaurants, Aizle, and The Table, both of which focus on locally sourced product.

Have you been to Edinburgh? Thinking of going?
Leave me a comment at the bottom and make my day!

Around the World in 1998; Kathmandu Nepal