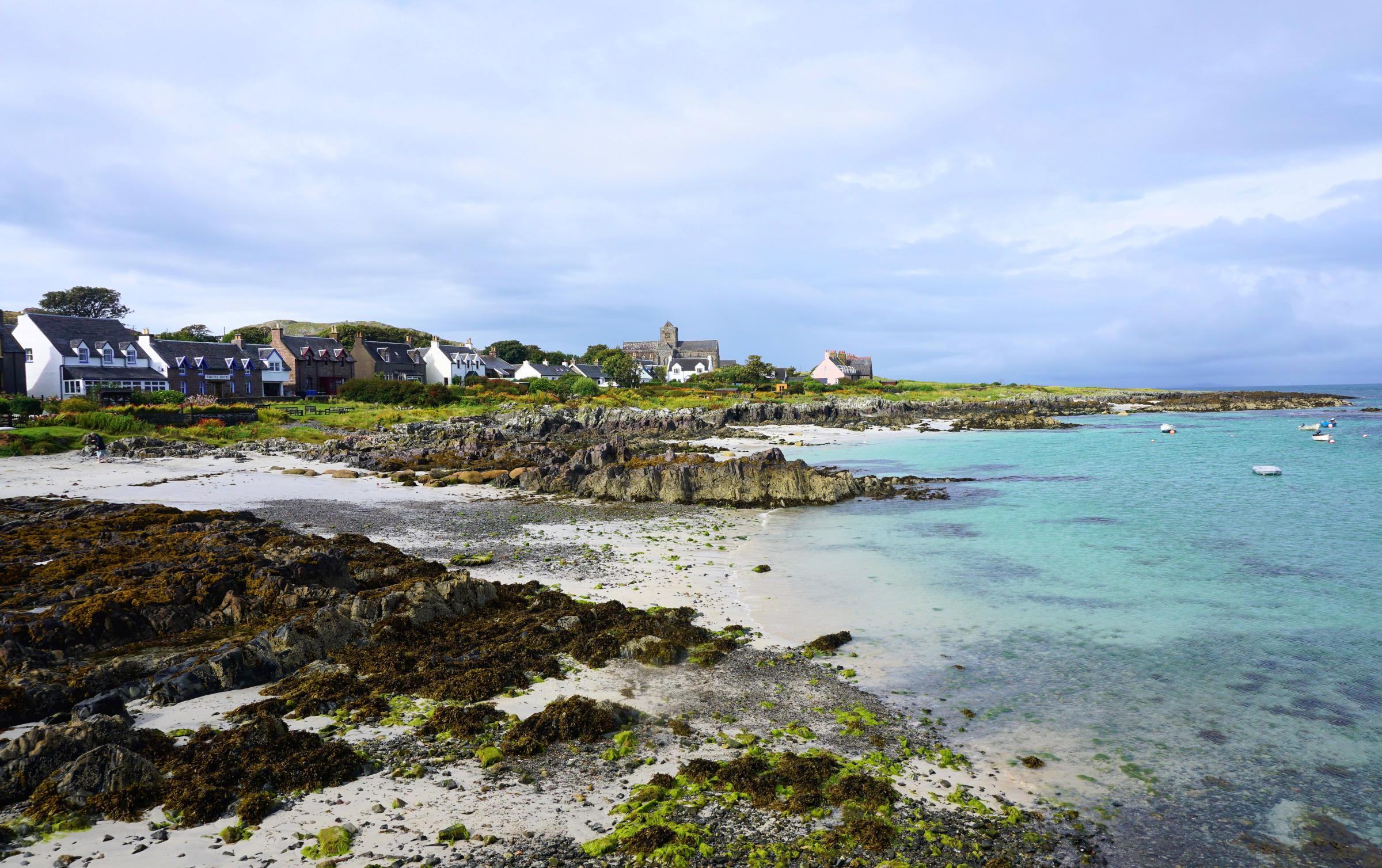 The next step of our Scotland journey was a trip to the Isle of Mull. While there we explored the miniature mystical island of Iona as well as a nature lover’s boat trip to Staffa Island.

The Isle Of Mull

The Isle of Mull is best known for its windswept vistas, the fisherman’s village of Tobermory which is home to the island’s only whisky distillery of the same name, and for the tiny island of Iona of its southwest coast which is home to an abbey that was once the center of early Christianity.

We drove from Glenfinnan to the ferry dock at Lochaline on single track roads (seen in the sheep photo above). The drive was lovely except when we got stuck behind 3 large motorhomes and were then faced with a giant logging truck coming in the opposite direction!

The ferry crossing was short and easy and soon we were on our way south and then west to the small village of Fionnphort where we checked into our B&B and headed over to Iona for the afternoon. More on the ferries at the bottom of this post.

Where to stay in Fionnphort on Mull

Caol Ithe B&B -We spent one night at the Caol Ithe B&B in Fionnphort and it was one of the nicest traditional Bed and Breakfasts we’ve stayed in. It’s a lovely four room guesthouse about 3 blocks from the ferry dock to Iona. The charming hosts made an excellent cooked to order breakfast with homemade bread and locally smoked fish (best of the trip).
Our room was small but nicely appointed and spotlessly clean. It was filled with thoughtful touches like a coffee maker with pods, complimentary raspberry liquor, and homemade “tablet” which is like fudge but not chocolate.
The view from our room overlooked the garden in full bloom and all the way to Iona, where we could even see the abbey from our room.

Dinner was at the only place to eat nearby, the Keel Row Pub. We found it overcrowded, with a crazy waiting system where you have to put your name on a list way before they open and then sit and wait to get into the restaurant. The food was mediocre at best and it seemed like the kitchen was ill-prepared for the influx of tourists they get every summer. Unfortunately, there aren’t a lot of other options. There’s a fine dining restaurant nearby called The Ninth Wave but they were closed on the day we were there.

If I were to return to the area, I would like to spend a few days on the even quieter island of Iona. One of the nicest options, and the closest hotel to the Iona Abbey, is the St. Columba hotel. We walked past it on the way to the Abbey and the grounds and the hotel looked lovely.

In the afternoon we walked down to the ferry dock and took the ferry over to Iona. As you can see in the photo below, Iona is only a short hop across the water from Mull. Our goal was to walk around a bit and check out the famous Iona Abbey. The entrance fee to the abbey was included in our last of 3 days on the Scotland Explorer pass (otherwise 7 pounds entrance fee). At the time, the cost for the ferry was 6.60 pounds return per person.

The walk over to the abbey took only about 10 minutes. The area was first founded as a monastery in 563 A.D. by St, Columba. It was the monks of Iona who brought Christianity to Scotland as well as illustrating the famous Book of Kells (now in Dublin Ireland) here. The abbey that remains today was built by Benedictine monks in the 1200’s. Many visitors feel this is still a very spiritual place. It certainly was peaceful.

Next to the abbey is a small museum with relics and ancient carved stones. Nearby is a small chapel and a graveyard where it’s said that many ancient kings of Scotland were buried, including one of the more famous, Macbeth!

When we arrived on the island, sitting in the middle of the road was this tortie cat (below) who looks very much like one of ours. She seemed to be the unofficial island greeter. However, heed this warning! She’s not as sweet as she looks because she took a swipe at me when I tried to pet her. Do not let her tempt you. Admire from afar.
While waiting for the return ferry, we stopped for a drink at the little bar near the dock (to the left as you exit the ferry). We tried two different kinds of Talisker whisky from Skye. The Talisker Skye turned out to be my favorite of the trip.

Before leaving Mull the next morning, we did a boat tour out to Staffa Island. It was raining when we boarded the boat but the sun came out when we reached the island. We had high hopes of seeing puffins but, alas, we were too late in the season for them. However, a dolphin was spotted off the side of the boat and the island was filled with other kinds of birds, flora and fauna, as well as the fascinating six-sided basalt rock formations Staffa is known for.

We booked the tour in advance with Staffa Tours. There are other companies, and they sound much the same, but this one offered a 9:30 am morning tour that would get us back to Fionnphort by noon which in turn, would allow us to make our 3:30 PM ferry to Oban.

I would have loved to have more time on Mull and we will for sure return. Next time I’d like to check out the Duart Castle near Craignure and the village of Tobermory. I’d take the ferry over to the Inner Hebrides and also try and spend a couple of nights on Iona.

If you want to drive a car on the Isle of Mull, you will need to take a ferry to get on and off the island. Check out the Caledonian MacBrayne ferry website for information. There you will find timetables (pay attention to the “season”) and fare information and can make reservations.
The smaller ferries at Lochaline and Kilchoan do not accept reservations. The ferry between Oban and Craignure does, and I recommend it in high season. I was glad we had a reservation as there was a long line by the time we boarded on our way to Oban, and not all of the cars got on the ferry. In Lochaline, we arrived about 20 minutes before the ferry departed and had no trouble getting on.
The ferry to Iona does not allow cars with the exception of those with a permit so for most people, it will be walk-on only.

Have you been to this part of Scotland? Thinking of going?
Leave me a comment at the bottom and make my day!

Pin one of the images below now and save for later!

Travel Tip: How to Avoid ATMs with Predatory Fees

A Visit to Oban, Kilmartin Glen, and Inveraray Castle in Scotland