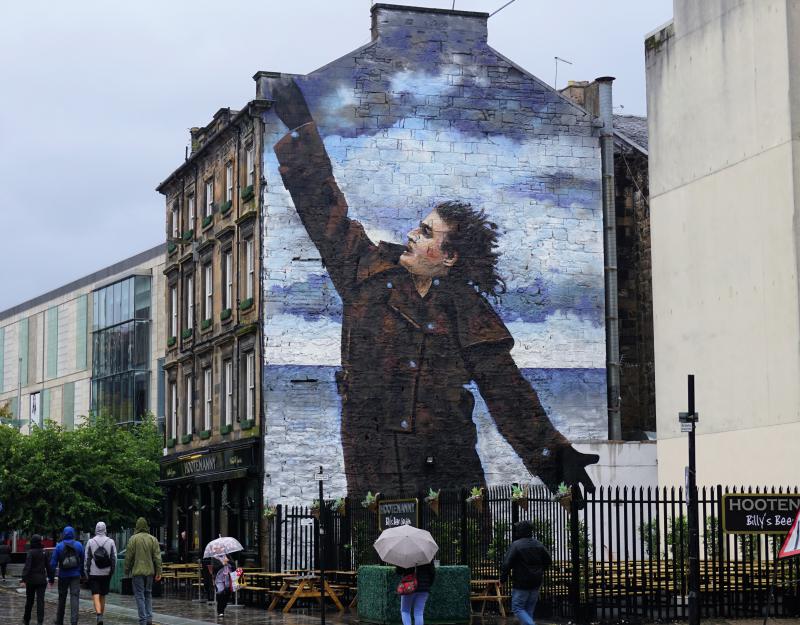 We ended our first trip to Scotland with about 36 hours in Glasgow before returning to London. After our stops at Kilmartin Glen and Inveraray Castle, we returned our rental car to the Glasgow airport and took the airport shuttle bus into the city. This could not have been easier. The drop-off for the Queen Street station was literally in front of the hotel we were going to stay in and it only cost £7 each.

What to See and Do with 36 Hours in Glasgow

Because we’d arrived in the afternoon we started off with a walk around the city center to get the general feel and layout. The first stop was George Square with the city chambers building on one side. This is where all the city business takes place and the inside lobby is beautiful and covered in marble and carved wood.

Above, George Square and the City Chambers building.

Above, the interior lobby of the City Chambers, complete with Venetian mosaics, granite pillars and carved statues.

Next, we walked down to the river and happened to catch this very cool mural below.

On our next full day in the city we visited the Glasgow Cathedral, dedicated to the patron saint of Glasgow, St. Mungo.

Many of the stained glass panels in the cathedral represent the various trade guilds of Glasgow.

Above, the crypt of St. Mungo and the lower church.

Above, the organ of the cathedral.

The Glasgow Necropolis is a cemetery next to the cathedral which is home to ornate above ground Victorian tombs. It feels like more of a park than a graveyard, though there are plenty of toppled tombstones if you are looking for a creepy vibe.

Just a block south of the Necropolis is Tennent’s Brewery, home to Tennent’s Lager which has been brewed since 1885.
We arrived with not enough time to do a tour, but we did have a pint and check out all the memorabilia in their Heritage Center. I loved the sign for the restrooms which included a kilt-wearing “gentleman” image.

The word “tenement” brings up images of squalid, overcrowded apartment buildings to most Americans, but this apartment (now a museum) is anything but. This was our favorite experience in Glasgow.

The apartment is a window into how people lived almost a century ago. This specific apartment was lived in by a woman named Agnes Toward from 1911 to 1965 and appears virtually unchanged from the beginning of that time, down to the coal burning stove in the kitchen and original boxes of food in the cupboard.

Both the parlor room and the kitchen had beds built into closet spaces. Quite often multiple children shared beds like this.

There was a bedroom in the 4 room house, but it’s likely it was rented out to a tenant for extra income and Agnes Toward shared the bed in the kitchen with her mother.

The bathroom was fully functioning with running water and a flush toilet, a luxury.

The Tenement House can be visited on a self-guided tour, but we found the tour guide on hand to be charming and willing to answer my millions of questions.

Where to stay in Glasgow

We booked a room at the Carlton George using Chase points primarily because of the central location which included a subway stop at the corner, the Queen Street train station (trains to/from Edinburgh) next door, the Central train station is a 10 minute walk away and the airport bus let us out literally in front of the entrance.

Our room was large, with big windows overlooking the street, but not too noisy. We had a side view of Nelson Mandela square. The bed was two twins pushed together and both mattresses and pillows were uncomfortable (a theme in Scotland). The room came with a complimentary mini bar which included small carafes of whisky, vodka, and gin. The small bathroom had a tub/shower combo and every time we showered, the water went everywhere.

The room came with lounge access which included breakfast and afternoon “tea”. Service was spotty as were the offerings. There wasn’t much available at breakfast (coffee, pastry one morning but not the next, yogurt, whole fruits), so go early because it was rarely replenished. Midday tea had minimal pastries, and evening drinks and snacks were minimal. Again, go early.

If we were to return to Glasgow, I would consider staying at the CitizenM hotel which is an affordable and centrally located choice.

If we wanted to splash out with something more lux, I would look at the Grand Central Hotel which is in a historic building close to the central train station.

Where to eat in Glasgow

Unfortunately, both places we went for dinner while in Glasgow have closed since we’ve been there. On one night, we had dinner at a restaurant called City Merchant. While the food looked good, our overall impression was “meh”. So I guess I should not be surprised that they are now closed and have reopened as a Turkish Restaurant! The second restaurant is called Ramen Dayo and while they still have one location, they no longer have the one we visited on Queen street.

We had a nice lunch at the Butterfly and the Pig tea room which offers lovely sandwiches, pastries, desserts, and of course, tea.

Have you been to this part of Scotland? Thinking of going?
Leave me a comment at the bottom and make my day!

Pin the image below now and save for later!

Around the World in 1998; Jomsom Trek, Annapurna Himal, Nepal

Taking the Virgin First Class Train from Glasgow to London