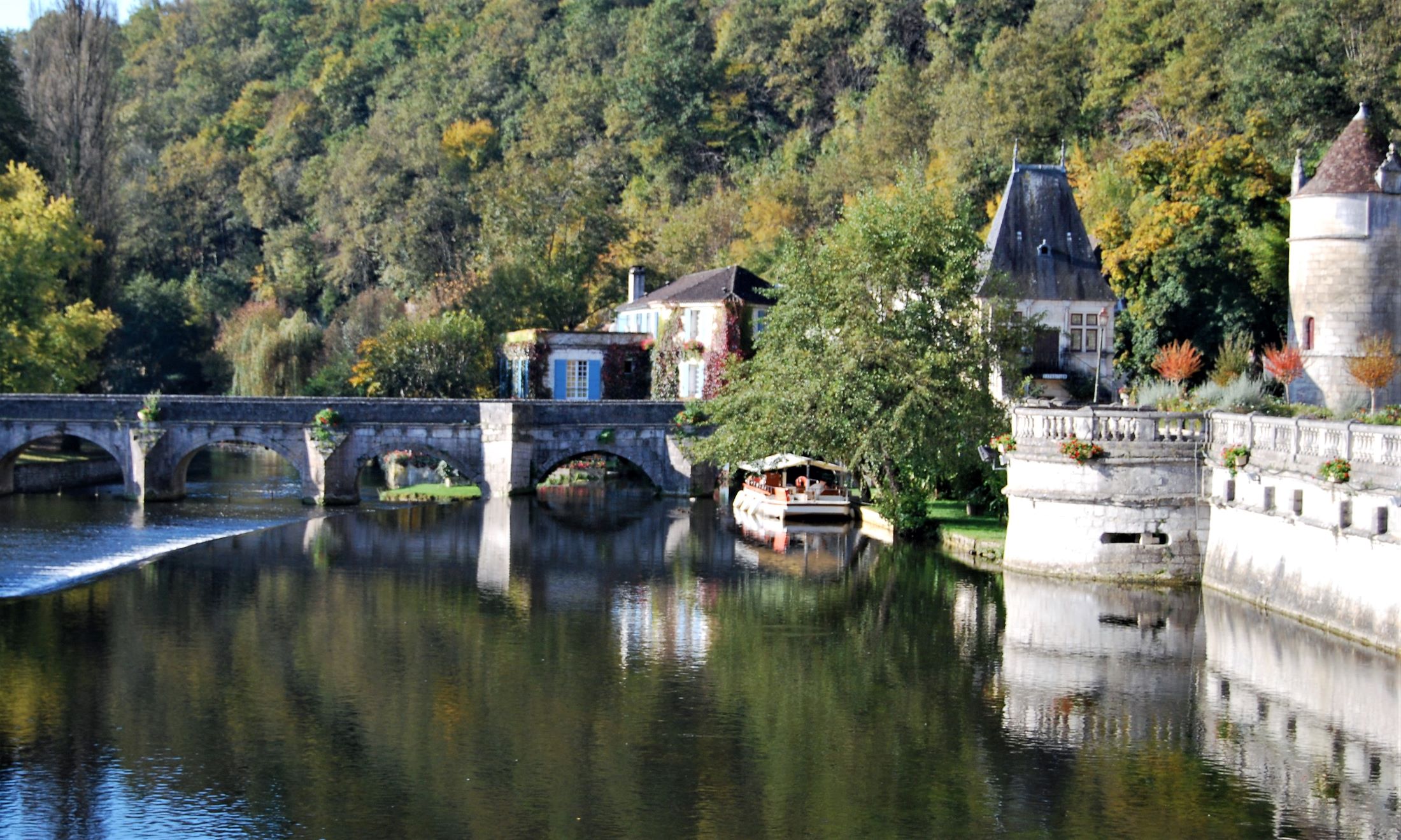 Sometimes reading the paper pays off. A few months ago, I was reading the International Herald Tribune and came across a restaurant review. Written by Patricia Wells, it usually includes two restaurants in France, or somewhere in Europe. Since we were headed to France, I read it with an eye toward a possible good meal. Well, the first review was for a Michelin three-starred restaurant in Montpellier that sounded fabulous, although out of budget (and our wardrobe). The other, however, Chez Philippe,  looked promising and affordable, so I ripped out the article, stuck it in the guidebook, and forgot about it until we got to back into Spain.

And sometimes the culinary Gods are with us. The review said that even in the tiny seaside village of Marseillan the restaurant is often full and “reservations a week in advance are not out of order”. It also said they were closed Sunday, Monday, and Tuesday, the very days we were in Barcelona, and wanted to call for a Wednesday night reservation. So, as soon as we crossed the border into France, we stopped at a payphone and called for a reservation. No problem, they said (by the time we got there for dinner, they had filled the reservation book).

We arrived in the town of Marseillan to discover that all the hotels were closed for the season, with the exception of an expensive one on the beach. And no, we did not stay there! We drove out of town and found a Premier Classe Hotel (motel) and parked ourselves there for the night.

The initial allure of Chez Philippe is twofold. One, the restaurant is owned and run by three men who previously owned a Michelin starred restaurant in Paris, which they closed three years ago. Two, the restaurant offers a 100 FF prix-fix menu only (although the review implied a la carte as well) which turned out to be extremely good value for the money.

The setting of the restaurant itself is also alluring. On a back street in this tiny town, from the outside it appears very unassuming. Inside, however, pale yellow walls, tables made of warm honey-colored wood, and ceramic plates in similar colors, but different patterns, greet you with a welcoming atmosphere. On the walls are more honey-colored wood, this time in the form of frames that surround colorful drawings of food and handwritten recipes, some for the menu items themselves. The menu itself is straightforward, yet in no way simple. The atmosphere is comfortable and casual, both the diners and the staff dressed informally. By the time our diner was well underway the entire restaurant was full, all 34 seats, as well as a small private room upstairs.

We began the meal with one of our favorite white wines, a Viognier, which we discovered comes from that region of France called the Languedoc. The wine was a 1997 Domaine La Condamine L’Eveque, and went fabulously with the meal. David opted for a couple of items that were presented on the small chalkboard of “daily specials” and I stuck to the good choices on the menu. For an appetizer he had the Mousse de Brochet aux Pistachios, Buerre a la Orange (local fish mousse with pistachios and orange butter sauce) which was a lovely, light baked mousse, studded with green pistachios atop a tangy orange sauce. I had Aubergines Marinees au Fromage de Chevre (roasted eggplant with goat cheese) which was simply slices of roasted eggplant, atop a thick layer of warm goat cheese, on top of toasted bread. All sprinkled with sea salt, herbs, and garlic and tasted incredible.

For his main course, David again ordered a special; Poelle St. Jaques au Curry (sea scallops in curry at an extra charge) which were served with the bright orange roe still attached in a light curry butter suace with julienned zucchini. I had Roti de Dindonneau Confit aux Echalotes et Ail (young turkey confit with shallots and garlic). This was an incredibly homey dish, not what I expected, but so good, nonetheless. The turkey was rolled, wrapped in its skin, and then slow roasted and served with whole roasted sweet shallots and garlic in a flavorful jus.

At this point, we should have had dessert next, but David being the culinary traditionalist, insisted on a cheese plate first (again an extra charge). Instead of having a tray of multiple kinds of cheese to choose from, he got whatever was the fromage du jour. Thankfully, it was his favorite, two different types of goat’s cheese, one hard, one soft. This was presented in somewhat of a ritual. First, the cheese plate was placed on the table and then the waiter returned with a crock of coarse sea salt, a bottle of herb/peppercorn olive oil, and a pepper grinder, all of which were to be used to enjoy the cheese to the fullest. Which of course he did, relishing every last bite!

Finally, it was time for dessert and I ordered, of course, my usual chocolate, this time in the form of Ganache au Chocolat, Zestes D’Orange et Gingembre Confits (chocolate ganache with candied orange and ginger). This was a choc-a-holics dream since ganache is nothing more than pure dark chocolate melted and mixed with heavy cream. The result, when chilled is like eating soft fudge, this time accented with the complementary flavors of orange and ginger. David had Baba au Rhum et Sabayon au Rhum which was a light angel food cake drenched with rum and served with a rum creme anglais type sauce.

At the end of the meal, we spoke with the owner, who spoke more passionately about food than anyone I have encountered in a very long time. We asked him why he left Paris and his starred restaurant, and he replied that he just loved the area and wanted to retire to an easier life. I told him that a small restaurant like this one is every chef’s dream and he is fortunate to have made it work so successfully.

Chez Philippe is located in the small town of Marseillan at 20 rue de Suffren,( tel. 04-67-01-70-62.) Reservations are absolutely necessary, and some of the staff do speak English, so don’t worry if you don’t speak French. They are open for dinner only.  The menu is 100FF per person, and although we spent 355FF on the entire meal, including wine and extras, we felt it was an excellent value.

We left the pleasant memories of our meal in the south of France behind us, and set off towards Annecy, where our friend Tony, one of the three Kiwi gents we met in Thailand, lives now.  He had told us back then that he was going to try out for a  Rugby team in France, where New Zealanders are in great demand for their natural rugby abilities.  The Kiwis are far and away the greatest Rugby players on the planet, as we have discovered in our travels.  Most of the rest of the world plays a lot of rugby and cricket, not just soccer.  Some places have basketball, too.  The sports scene is a little different outside the USA.  At any rate, by the time we got to Europe, Tony had a job playing semi pro rugby, and was comfortably set up in Annecy.  We found out from him that Thomas, another of the three, was still unemployed and in the process of moving in Britain.  Thus explaining our inability to locate him.

We arrived in Annecy just before sundown and called Tony from the center of town. We met in the closest cafe, where we paid a mind boggling 12 dollars for a beer and a coffee.  It turned out to be the town’s one and only celebrated transvestite cabaret bar! What a coincidence, no? Of course, everything was overpriced.  Tony took us to his house, just up the street, where his roommates had gone to their folks for the weekend and offered us their room.  What a change of pace, from always on the go, to real bed, real apartment.  A home. Maybe not mine, but the feeling was good.  Tony took us out to a local rugby sponsor’s restaurant, where he knew the chef and the crew, and we ate well.  We both slept well that night.

Friday, Tony had school and rugby practice, so Kristina and I went to the town, and walked around the old part, bought some blank tapes to record some of Tony’s CD collection, and took in the sights around the old town.  Annecy is situated on the edge of a lake, at the foot of the French Alps, just southwest of Geneva.  It is a beautiful old city with plenty of charm and year-round tourist appeal.  Summer on the lake, winter in the mountains, skiing.  Tony took us out to dinner with the rugby guys at their hang out, a bar/restaurant in the next village, which is owned and run by one of the team owners.  They ran out of the regular meal, so we all got the default, steak/frites.  The food was good, and the atmosphere festive. We planned, that night, to ski in the morning.  This was the best news I had heard in months.

“Of course, I want to go skiing!” Tony had offered me one of his super discount passes to one of the nearby ski areas.  Once I had cleared it with Kristina, I was good to go.  Tony is learning how to snowboard, and getting pretty good, but I stayed on skis.  If I only have one day to ski this season, I figure, I might as well do what I do best.  I snowboard some, but not as much I ski, and I am much more comfortable on a pair of skis, still.

The weather was fantastic the next morning, and Tony helped me rig an outfit with some extra gloves and a pair of his windproof workout pants.  So early Saturday AM, we bombed out the mountain road to the snow.  There was a lot of snow, although it had clearly been melting for some weeks.  We had icy conditions in the morning and slushy in the evening, and we had a blast.  It felt so good to get out and play in the snow a little bit. Little did I know, one month later, Tony and I would reign supreme in hip-deep, ultra-light powder in the higher Swiss/French alps, just after the ‘big spring blizzard’.  For now, I was content and ready to face the next leg of our adventure: Italy.

Have you been to France? Thinking of going?
Leave me a comment below and make my day!

Any post on this site may contain affiliate links. Thank you for supporting wired2theworld by using our links to shop, book hotels, or organize tours. If you use them, they cost you nothing extra but we may make a small commission that helps us to continue to provide helpful and free content.