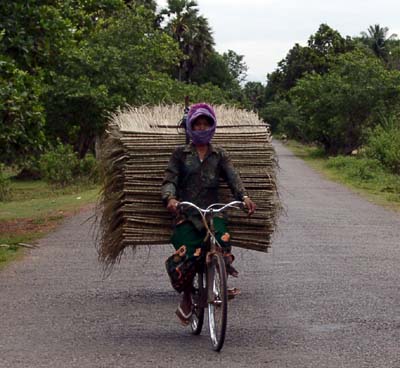 This morning, after our usual breakfast of egg sandwiches, baguette, and coffee with milk at the Cheese Shack, we drive out to Banteay Srey, which is also known as "the citadel of the women". We pass through great scenery on the drive and I had the chance to try out the video function of our new camera. We can take 30 seconds of low resolution video so I got some great shots of  traditional houses on stilts, public primary schools, pigs, cows, water buffalo among the rice paddies. We also stopped the car so I could get a couple of shots of this woman (above) on her bicycle. She must have thought I was crazy, but she still smiled and waved as she passed by.
We crossed over a few bridges, some of which were not much more than a few boards nailed together. The trip is about a 1/2 hour outside the main paort of Siem Reap, and the driver charged an extra $10 for the trip. The road used to be in much worse condition and was considered dangerous due to roving bandits and such, but now it's smoothly paved and seemingly safe. I suspect that the upcharge won't last much longer. 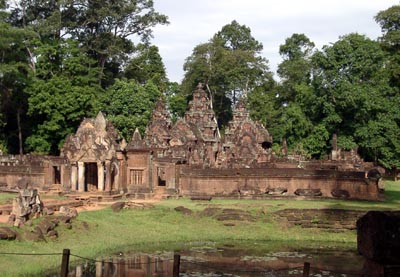 Banteay Srei is a beautiful temple with some of the most intricate carvings I have ever seen. It consists of rose colored sandstone, every surface with some sort of detail carved into it. It's much smaller than I expected but stunning nonetheless.We arrived early, before the tour busses. Still, there were afair amount of people and the site could easily become over crowded.

The temple is Hindu, dating back to the latter half of the 10th century and is considered to be the "jewel" of the temple groups due to it's small size and exquisite condition. As we waled among the miniature temples, I was amazed at how untouched everything looked. It was like walking through a princess's dollhouse. The style of the carvings is Banteay Srei, it's own style, just as many temples are in the Bayon style. It's said that this temple is more like those of India than any other Hindu temples in Cambodia, and I can certainly see that in the elaborate details. The only thing missing is the gaudy paint. 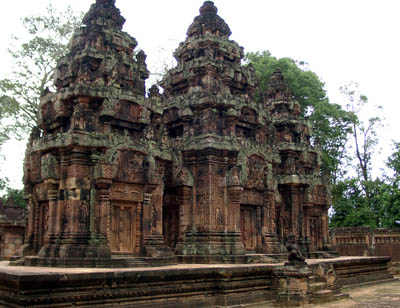 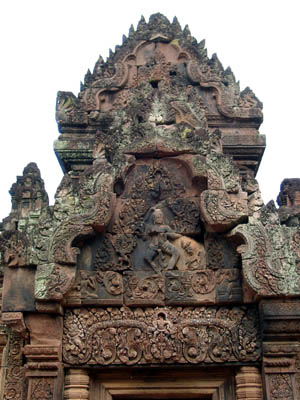 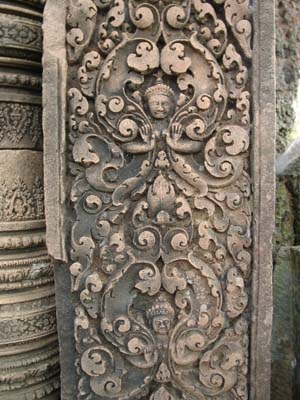 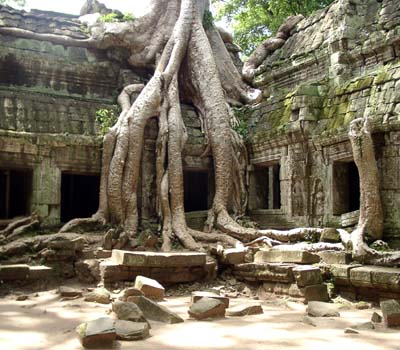 On the drive back to Siem Reap, we stopped at the temple of Ta Phrom. While we walked along the path to the temple entrance, a local police officer offered to sell us his badge for $5 . Of course, he didn't say it was fake, but this is apparently a common scam among the temples and we politely declined.
Ta Phrom is the temple that was left almost as it was found in the jungle, and now famous for the movie, Tomb Raider. Most of the temples were found in such a state, ruins covered by Banyon trees and the jungle. It's hard to tell if the stones hold up the trees or the trees hold up the stones. Quite a few places are roped off, and every time it rains, more pieces fall. In the case of Angkor Wat and Bayon, for example, the trees were stripped away, stones catalogued, and the temples reconstructed.  Ta Phrom was left as is, and it still continues to crumble. The setting is very romantic, and brings the feeling of adventure and discovery to it's visitors. I could almost imagine I was a French explorer a hundred years ago, thrashing through the jungle to come across these temples being engulfed by the strangler roots. 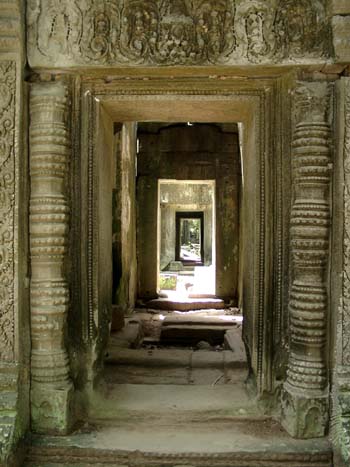 We had an over priced lunch at Cool Corner Pizza, a reastaurant near the old market in Siem Reap.  It's owned by French ex pats, and lucnch included a pizza with a disappointing crust, drinks,  and a very decent hoummous plate for $14. I know, I can hear all you budget travelers out there screaming at me. Truthfully, I wanted to eat at the stalls in the market, but David still had a pizza craving. After lunch, we got stuck in the market during rainstorm, where I bought a beautiful silk scarf for $4 and georgous red silk top for another $4. I wish I'd bought more.

An afternoon rainstorm forced us to go see more temples instead of the fishing village we had planned. Along with Ponheary we checked out the temples of Preah Khan and Neak Pean.

Neak Pean is also known as the Temple of the Coiled Serpents. It is perfectly square walled complex with a tiny temple atop a circular mount. The temple forms a floating island in the center of a large moat. On each side are four chambers that face out onto smaller ponds. Each chamber has a water spout which takes the form of a head of either a human, lion, elephant, or horse. When we were there, the moat was empty, but I'm sure it all appears quite magical when reflected into the pool below. 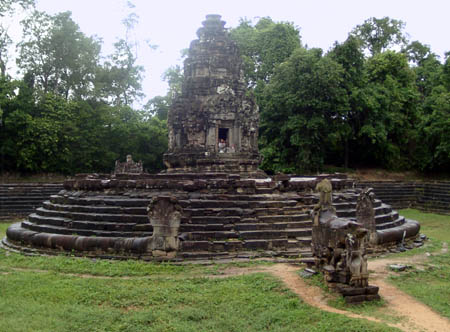 After Neak Pean, we headed to Preah Khan, the "sacred sword" temple. This temple was a home to monks, and their students and has both Hindu and Buddhist sections to the building. It is similar to Ta Phrom in that it is in an advanced state of decay and has not been "reassembled", but rather, left to the elements.

Most of the temples are missing their buddha statues and heads. This loss is due to two main reasons. First, there were Hindu kings that followed Buddhist kings, who had all the buddhas removed from any of the temples built before him, and second, modern day poachers have stolen them, along with countless other statues to be sold on the antiquities market. Some statues have even had the heads stolen right out of the national museum in Phnom Penh! The temples have also been damaged by soldiers, ranging from US bombing in the late 1960's, to Khmer Rouge soldiers desicrating the temples, to Vietnamese soldiers using the carvings for target practice during their occupation in Cambodia.
Below, in a photo of a wall at Preah Khan,  is a prime example of both the religious and opportunist desicration. On the left, in the small niches, were faces of Buddha, removed almost 800 years ago. The larger apsara on the right had her head removed in the last ten years, probably to be sold in Thailand. 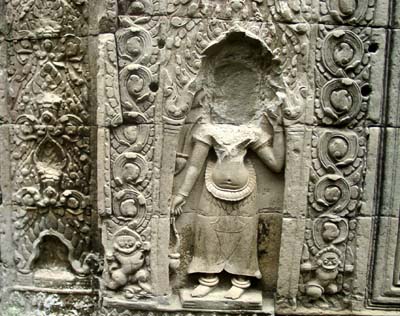 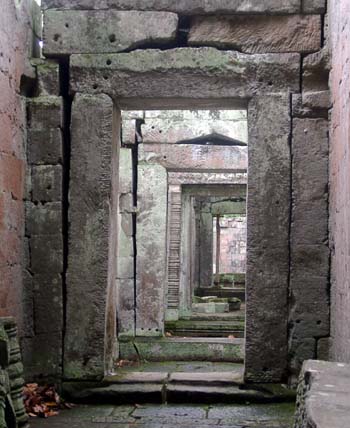 Doorway in Preah Khan, above.

In the evening, after another dinner at the Chiang Mai restaurant, Ponheary suggested an alternative to taking the boat or plane to Phnom Penh, a private car for $60. I was a bit concerned that the road was too rough and would take 12 hours, but she said it would take about 4 hours to make the drive. Flying would cost $60 each, the boat $23-25 each and take about the same amount of time.  I had read that share taxis could be hired at the central market, either by the seat or the entire car. We checked this out at the market, couldn't figure out where to go, and finally decided to take Ponheary's offer. Personally, the boat didn't sound fun or safe to me, so I was happy to go with the car option. Also, the car was door to door service for only a few dollars more per person. This would be an even better and cheaper option for 3-4 people, or people traveling with children.