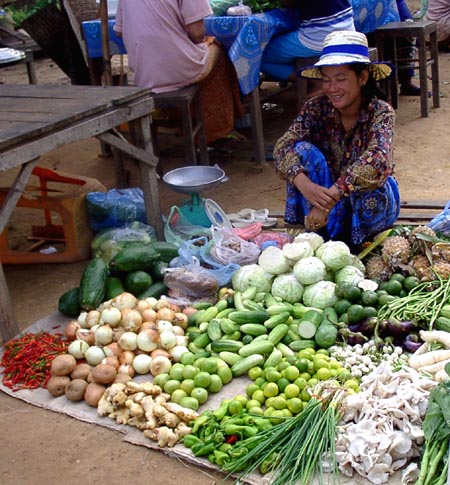 Last night we told Ponheary that today we wanted to see the Vietnamese Fishing village and we'd had enough of the temples for now. I mentioned to her that I'd like to see a real local's food market, as opposed to the market in town which has mostly souvenirs for tourists (though we did walk through the food section there as well).  So, this morning, she sent us off with Phall, our driver for the last two days, and instructions for him to take us to a market along the way to the fishing village. 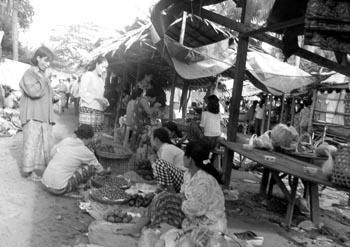 the main road and crossed a small bridge on to a dirt road. About a half mile down, we passed an elementary school and next to it, a small outdoor market. The market is semi covered by permanent wood structures consisting of a roof with open air sides. Most of the vendors sat on the dirt with their produce or meat in front of them, some out of the sun under the awnings and some, right in the dirt pathway. It was still early in the morning and there was quite a throng of people shopping for the daily food. As with many underdeveloped nations, lack of electricity and refrigeration make it necessary for people to shop for perishables every day. 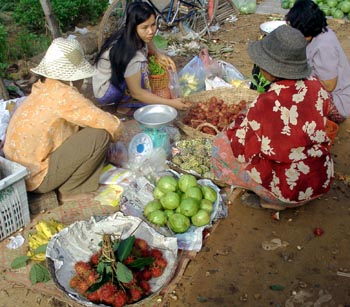 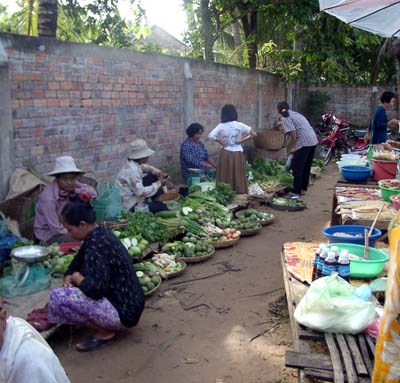 As we walked around, I was really impressed with the quality of some of the produce available. The meat, fish, and poultry, on the other hand, were a bit scary since none of it was on ice and all were covered in flies. I took some photos and tried to be as unobtrusive as possible, but it was a bit hard since we were the only white faces there. David and I were walking without Phall, who had elected to stay and protect his car from the children he said would damage it if he left it alone. It seemed like we were quite the object of curiosity as no one could quite figure out why we were there.  The lovely smiling woman in the photo at the top of the page blushed when I asked her if I could take her picture. She had some of the best looking produce there and I wished that I had a place to cook so I could have bought some. 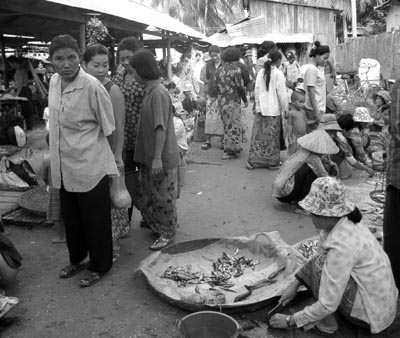 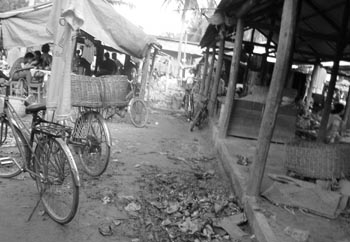 After the market, we walked over to the school which was wide open, though it appeared that all 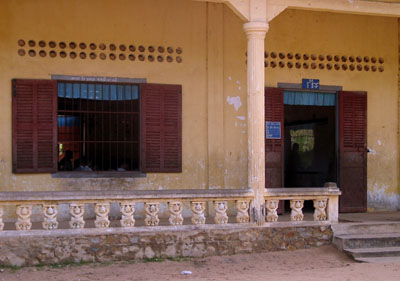 the students were in class. We poked our heads into one of the classrooms and were quickly invited in. There was a young woman at the front of the classroom, but it was hard to tell if she was the teacher or just an older student. After we entered, the children all stood and David, in his best teacher's voice said, "Good morning class!" They responded with a resounding "Good Morning!" in English! I'm sure he would have loved to stay and teach an impromptu English lesson, just as I would have loved to buy and cook the food from the market, but we had time for neither and had to leave for our next stop. 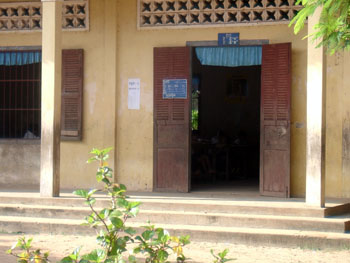 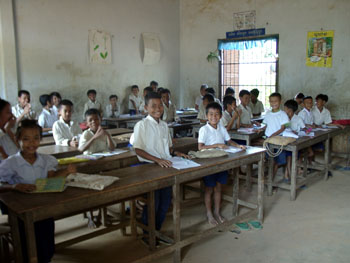 Back to Banteay Srei     On to Fishing Village ...