The Vietnamese fishing village is said to be a good option as a break from "temple overload". The Tonle Sap lake, which is one of the largest freshwater lakes in the world, rises and falls with the yearly monsoon tides. During the monsoon season (May to October) the Mekong river rises and actually reverses its flow back into the lake, casusing the lake to more than double in size. The lake provides most of the country's fish as well.
The fishing community has it's houses either on top of boat hulls or in the form of small shacks which sit on stilts. As the tide rises, the entire community packs up their homes and moves to higher ground. If they did not, they would be stranded out in the middle of the lake, or under water. As we got closer, we could see many houses, not much more than sticks and boards, literally being moved on the back of a truck, to places further inland due to the rising of the water. Once out on the water, we would also see boats being tugged inland toward the shallower water.

We arrived at an area set up just for tourists to take boat rides out onto the lake. There had to be at least 50 empty boats waiting for customers. Since Ponheary set up everything in advance, we did not need to haggle with the many people who wanted our business. Phall brought us directly to the boat, which, as it turned out, we had to ourselves. The boat sat at least 16 in wooden chairs set on the deck. Our fare was $15 total, for the two of us (Phall again staying with his car), and the trip took a little over two hours. This is overpriced according to the LP guidebook, but the book is out of date. Plus, if we'd had more people with us, my guess is that the price would have been the same. The trip was well worth the money. 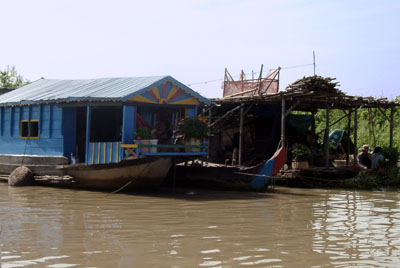 The boat captain pushed us out of his space in the canal, much like a Venetian gondolier. He had a difficult time maneuvering the large boat through the shallow water and the reeds. The further we got, the deeper the water, and the wider the channel became. I don't know why I had expected the "village" to be out on the lake, but in fact, it lined the sides of a small tributary. He motored slowly along and we had an excellent opportunity to take it all in. We were passed a few times by quicker boats, crowded with more people, but I'm not sure how they could enjoy the scenery while going so fast. 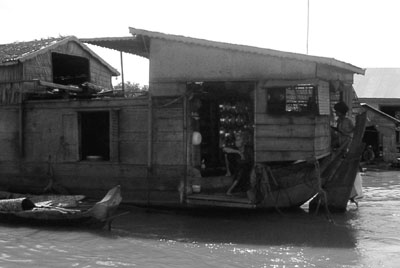 Along the way, we saw all the trappings of a regular, land locked village. There was a school, a billiards hall, markets, agriculture and aquaculture, and many homes, all floating atop variously sized boats. Some of the markets reminded me of the produce trucks that ply the streets of Latino neighborhoods in Los Angeles. These were small boats, filled with the basic necessities of life (bottles of fish sauce, produce, plastic baskets, etc.) paddled about from houseboat to houseboat, usually by a solo female proprietor. The farming techniques were quite interesting as well. We could see that some families had planted vegetables on a sort of floating island or in pots on rafts along side their boats. There was also some sort of aquaculture (fish farming) going on in large, cage covered barges. 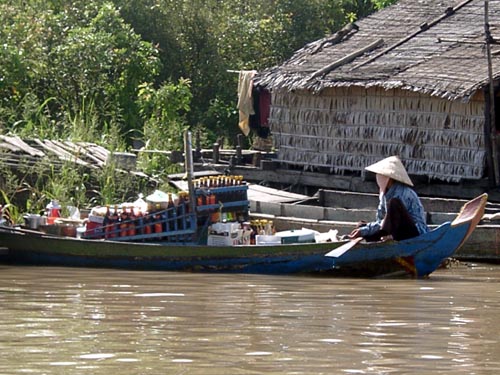 When we finally reached the mouth of the river, the boat's captain took us out onto the lake and turned off the motor. It was a bit unnerving, since he did not speak English and we weren't sure why we were stopped. Was he going to ask us for more money? Was it a scam? My traveler's paranoia was suddenly in full force.  Fortunately, he spoke a bit of French and David was able to determine that this was part of the "tour". To appreciate the vastness of the lake, one had to sit in silence on the calm water.

On our way back in from the lake, the boat made the standard "restaurant/gift shop" stop any good tour makes. Though we weren't really interested, we got out of the boat anyway. At the restaurants on both sides of the river mouth were huge birds, some sort of stork I think, sitting on top of cages with more big birds inside. I'm not sure why they were there, but I think they were fed to keep them there for the benefit of the tourists. Inside the shop I bought a bottle of water and noticed the shop owner had a pet monkey. Forgive me, I do not know what kind of primate it was. Maybe a gibbon? Anyway, I was torn between my horror of someone keeping it as a "pet" (though common here in South East Asia) and wanting to play with it and check it out. He was quite a tiny fellow, not even as big as our cats. I didn't attempt to pick him up (not after what happened to me with the monkey at the Bangkok Zoo back in '98) but I did get a couple of photos. 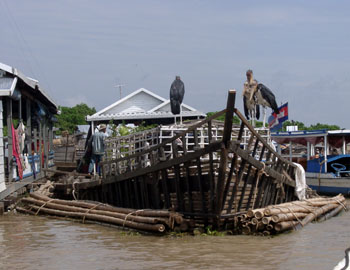 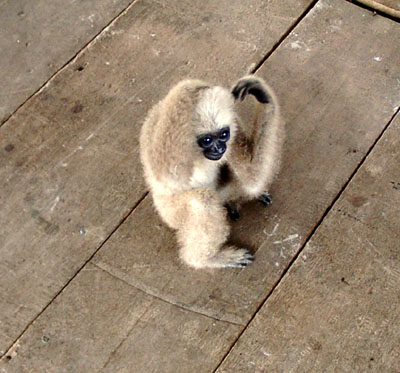 After our busy morning we stopped in town for lunch at Cafe Kampuccino. While standing outside reading their menu, we met a woman named Kim who said she'd eaten there before and that the food was very good. We invited her to sit with us and like any good travelers, got to hear her life story over lunch. Kim, a Canadian, was in Cambodia with the N.G.O., "Doctors Without Borders". She's stationed in a remote village and was in Siem Reap after spending 10 days traveling in Laos on her own. She was 6 months into a 9 month stay in Cambodia and it seemed like the stress of the job was quite high. Two other doctors that had started with her dropped out after 3 months and she was the only doctor left. Still, she didn't seem to have any regrets.  She also confirmed something that Ponheary had told us, that there is no malaria in Siem Reap. Of course, the CDC still recommends the medicine, so, better safe than sorry, we decided to continue taking it, at least until the end of our trip.

In the afternoon we went for a traditional Khmer massage at Angkor Massage. The place is run by the blind and helps to support and give jobs to the blind community in Siem Reap. The cost is $3 per hour per person. We walked in and there were 8 or 10 massage tables set up side by side in a large room. We were asked to change clothes and given pajamas, but I declined as I was already wearing loose clothes. Each of us was assigned a masseuse, who was indeed blind, and asked to lie face down on the table. It was then that the torture began.
Let me begin by saying that I've had many a massage in my time. I've had traditional Thai, Balinese, Swedish, all different types of massage. Never have I had a more painful massage than in Siem Reap. Imagine someone taking their thumb and pressing it into the most tender part of your body, like the inside of your upper arm. This is the type of move that is taught to commandos to incapacitate people. Now, imagine the person taking all their body weight and putting it behind that thumb, again and again. It was one of the most excruciating experiences of my life. All of my "ow!" exclamations did not seem to elicit any respite, just the occasional "sorry" and then more of the same. I'm not really sure why I didn't just get up and leave, but I guess I kept hoping it would get better. David, on the other hand, said his massage was excellent, and only hurt a little. Maybe I'm just too "sensitive". Oddly enough, afterward, I felt strangely good, if only a little bruised.

Next, we visited the artist's school, Les Chantiers Ecoles. Here, we saw how students from rural areas learn the ancient arts of stone and wood carving and painting. And of course, at the end was the obligatory visit to the gift shop. The quality was much better than what was available in the central market, but very expensive. Had I the money, I would have loved to purchase a giant stone buddha or angkor era goddess, but these were in the $300-$500 US range.

After a trip back to the market where we bought several more silk scarves and a couple "Danger:Land Mine!" T-shirts (of questionable taste if you ask me) for gifts, we went to the Red Piano, a popular bar/restaurant where we had an early dinner. Tomorrow we're off to Phnom Penh....