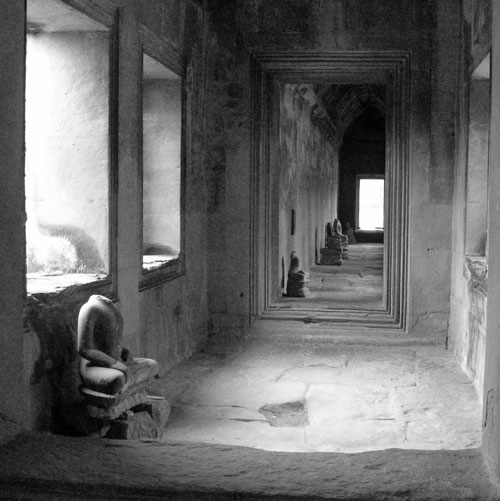 In July 2002 we took a 2 week trip to see the
ancient ruins of Angkor, the atrocities of the Khmer Rogue
in Phnom Penh, the beaches of Ko Chang Thailand,
and the bustling metropolis of Bangkok.

May 10, 2002
I’ve been preparing for this trip now for about 3 months, ever since we decided where to go this summer. Actually, the decision of where to go was also part of the preparation. In the running were Turkey, Egypt, Peru, Cambodia, Vietnam, India. Some were disqualified due to time constraints (India seems to need much more than two weeks can offer) and some were eliminated due to perceived danger and/or political unrest. Ultimately, we narrowed it down to Peru and Cambodia. After London last June, I was thirsting for some adventurous travel, something that would be a bit of a challenge. After much deliberation, we chose Cambodia. Although we’ve never been to South America and do hope to go there someday, the allure and pull of South East Asia was just too strong and the desire to return, too great.

After that I began my research in earnest. The internet is my main resource and an invaluable wealth of first hand information. I began haunting message boards and posting questions of my own. See the links page.

It seems that travel in Cambodia, specifically in the highly touristed areas of Siem Reap (Angkor Wat) and Phnom Penh have become both safer and easier in the three years since David and I were in the region. In fact, it was probably safe even then, but the border had just opened to land crossings and the going was rough or so we heard.

Now, the trip from Bangkok is still rough and we have chosen to fly this route. This is a dilemma for many travelers, fly for $140 each way from Bangkok to Siem Reap, or take a bus for as little as $3 from Khao San Road in Bangkok. The road trip is fraught with it’s share of problems and will eventually cost the traveler at least 12 hours time in a minibus and pick up truck and probably much more in dollars while waiting at various stops and visa scams. There is another way, however, to do it on your own, and this is detailed on Gordon Sharpless’ wonderful site, TalesofAsia.com. In this way, you take a public bus or train to the Thai/Cambodia border and cross the border on your own, arriving well before the KSR mini van hordes. Then, negotiate your own ride from the border to Siem Reap. The journey will still take 6-8 hours on bumpy pot holed roads. Still, we decided to fly for the sake of saving a bit of time. Thus, we will fly to Hong Kong, change planes and fly to Bangkok where we have a 5 hour layover and then fly to Siem Reap. It will be a long day any way you look at it.

Here’s a tip for buying an inexpensive plane ticket. If you live in a major city that has a large immigrant population of your destination county, go to the neighborhood where they live and shop the travel agents there. Los Angeles has the largest Thai population outside of Thailand and the eastern part of Hollywood is known as “Thai-town”. There, through the recommendation of a Thai friend, I went to Star Tours travel agency and purchased our tickets to Bangkok and Siem Reap. I saved about $300 off the cheapest internet fare I could find and I got to fly the airline I wanted (Cathay Pacific) which had the best schedule for us. Keep in mind, most flights from the western US depart mid afternoon for Bangkok which has an arrival time of around midnight. You will also lose a day in transit, crossing the international date line. We wanted to arrive mid-day so we could go straight to Siem Reap and not lose time or have to spend the night in a hotel in Bangkok.

I have a running list of things to do before we leave. Everything seems to be half complete. I have my prescription for Doxycycline for anti malaria, but have not had it filled. I decided which web sites I am going to buy travel insurance and book our hotel for Bangkok on, but I can’t bring myself to plop down the money.

First let’s talk about the malaria issue. This is, of course a matter of personal choice if you want to take the medication or not. The Centers for Disease Control (CDC) states that most of Thailand is malaria free except for the land bordering Burma and Cambodia and possibly the island of Ko Chang. Strike one for us.

Then, it states that many parts of Cambodia are safe, except for the Siem Reap (Angkor) and rural areas. Strike two. The CDC also says that in South East Asia, the malaria parasite is resistant to Larium, which is the anti malarial that you only take once a week. Fine by me since larium is linked to everything from nightmares to hallucinations to depression. The other options are the antibiotic doxycycline and the a drug, malarone. Malarone, taken once a day and only for a few days prior, during exposure, and a few days after, costs about $5 a pill and is not covered by my health insurance. It has no major side effects known as of yet. Doxy is taken once a day, a few days before, during ,and for 4 weeks after exposure. Possible side effects are stomach upset and sun sensitivity. The bonus is that it may help prevent intestinal nasties of the bacterial kind. It should be covered by my insurance for a grand total of $5.

Next comes the travel insurance. “But you’re only going for 2 weeks”, you say, “why do you need it?” Fear. Fear of something happening before we leave and we can’t go, forfeiting our non-refundable plane tickets and pre-paid hotel. Fear of something dreadful happening while we are there and needing medical assistance. Fear of these two words; Cambodian Hospital. Need I say more?

From a link on the LP Thorntree, I found a good travel insurance web site called World Travel Center. After much comparison, I selected a plan totaling $98 for the two of us that seemed to be very comprehensive (medical, emergency evacuation, trip cancellation, etc.), but I had some questions so I emailed the company. I received a very quick response that said that the plan I had chosen was not going to be carried by the company any longer, but that I could call and they would recommend other plans. Hmmmmm….I was skeptical, but called and spoke to a very nice women who emailed me another plan that was not yet up on their web site. It seems better suited to us and would cost even less so this is the one I think I will buy

Lastly, we need a hotel in Bangkok for the last three nights of our trip. For years, David and I have been saying that if we ever went back to Bangkok we would stay at the Peninsula hotel. Ever since we spent New Year’s Day 1999at the Peninsula Hong Kong, and stayed at the Beijing Palace Peninsula Hotel, we knew we’d have to go there. It had just been built when we were there last and we could not afford to stay there on our RTW budget. When my mother and I went there in 2000, we visited friends who were staying there and I got to see the fabulous rooms first hand.

The Peninsula sits right on the river across from the famous Oriental Hotel (rooms starting around $250 a night). The Peninsula is considered one of the best luxury hotel bargains around given that rooms can be found online starting at about $130 a night. These are rooms that would cost $300 and up in the U.S. I learned some interesting things when trying to find the best deal online. Booking through the hotel directly does not necessarily give the best rate and room rates do not include 17% in service charges and taxes. So, the cheapest room on the Peninsula’s web site is $140+$23.80 in taxes. It does, however, include breakfast. When looking at all the various online booking services I found rates from $130 a night including breakfast and taxes to $175 a night for the same room nothing included. Buyer beware. For a little more, we can upgrade to a Grand Deluxe room with a balcony over the river. This is the plan. Hey, we have jobs. We can afford it, right? No more Khao San Road flop houses for us.

July 8, 2002-5 days to go….
Not too many left now, and still a lot to do. I managed to take care of the Peninsula reservation/payment, get the insurance, and malaria medicine. David, who spent a week in Baja, bought his doxy for $27 for 24 pills!! Who said medicine in Mexico is cheaper? Only if you don’t have insurance (which he does!), I guess.

This week I also, bought AMEX Traveler’s Checks over the phone and had them delivered for only $4. This is a great service they offer if you have a Gold Card. It’s so simple and they just debit your checking account. We will also be bringing US$ in small denominations, primarily for use within Cambodia.

We did a preliminary pack last night to see if we were missing anything. See my pack list. Almost everything I pack is either black, white or khaki. We are using the same eagle creek bags we took around the world. They are a bit large for this trip, but hopefully we can fill them with goodies!

We have a guide lined up for our time in Siem Reap. She was highly recommended by another traveler on the the Fodor’s message board. When I wrote to the poster, she responded with lots of information and nice things to say. Many people say that you don’t need a guide to tour the temples, but I figure if I am going so far, and spending so much, I’d like to be able to understand what I’m looking at.

Our guide  is named Ponheary Ly and is licensed and supposedly speaks English very well. This is very important, because in Honduras we had a horrible guide in Copan, who could recite the details in English, did not speak it well enough to answer questions. Ponheary also owns a guest house called the Marina Villa ($15 a day) at which we will be staying and we’ve booked a car and driver through her as well. Many people rent a “moto” bike and driver for about $7 a day, but since there’s two of us the car seems to be a better option and it will be nice to have the A/C to cool off. I’ve been communicating with Ponheary via email and she recently emailed us to confirm our arrival and say she will meet us at the airport. Nice. I also think it’s very interesting that a woman is working as a guide as my understanding is that most of the people who work in tourism in Cambodia are men.