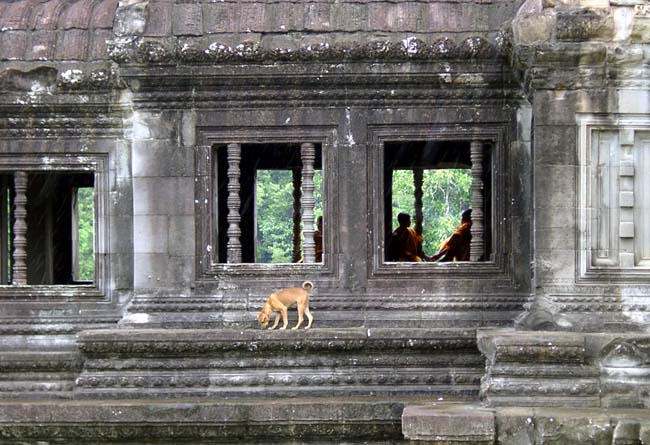 Sometime in August my mother said to me “I have to go on vacation, now!”

She knew that I could not go with her since we’d already taken a trip together this year to Prague, Vienna and Budapest. Didn’t she realize we have an every-other-year rule for our vacations together?

So, of course I said, “where do you want to go?” and got back the usual, “I don’t care” response. I suggested China as I knew she still wanted to go and it wasn’t high on my list. She also mentioned going back to Thailand and said she’d probably go on a tour since she’d be going alone. I suggested she check out Intrepid tours as I’d heard they were good and not the “big bus” style which I knew she’d hate.

So, for a month or so we debated back and forth the various tour companies she’d researched, arguing the merits of each, with me constantly saying, “Why don’t you do it on your own? It will be cheaper and I can plan it all for you!”. Finally she relented, deciding on Thailand with a side trip to Cambodia to see Angkor Wat.

I immediately contacted Ponheary Ly, the guide David and I had toured the temples with back in 2002. The more I helped my mother plan her trip, the more interested I got in returning to South East Asia. Ok, I always want to go back to Asia. But for a while, I’ve been aware of the great work Ponheary has been doing with local schools and of the foundation that was set up for her, The Ponheary Ly Foundation. I knew I really wanted to go and participate with the foundation.

At this point my mother had already got her tickets to Bangkok in Business Class on Singapore using FF miles.

I decided I had to go. I have enough vacation time, so why not? But this time, I’d be buying my ticket, so I opted to fly on Thai which has a non-stop flight to Bangkok from LAX. It’s a little more money than other carriers, but I figured it would be worth it since I’d be flying alone. Later, my mother was able to change her flight to the same one I’ll be on, albeit in Business class. She also (out of guilt perhaps??) upgraded my ticket to Thai’s Premium Economy.

We will only be together for the first week of this trip, the time spent between Bangkok and Siem Reap. After I go home, she will continue on for a week in Northern Thailand by herself.

For more information about what we’ll be doing besides touring the temples in Siem Reap, please look at the link on the left called “Cambodia School Visits”.

Other Planning and Preparation:

For once, the hotel choice turned out to be relatively easy. In Bangkok, we’re staying at the Royal Orchid Sheraton, using SPG points supplied by my mother. Thanks Mom! Can’t beat a “free” hotel room with a river view! I’m a bit concerned about the location, but the hotel has plenty of fans on the Fodor’s site. I know it won’t be the Peninsula, but prices there have increased out of budget.

In Siem Reap, we’ll be staying at the Victoria Angkor Hotel. It looks lovely and gets really good reviews. Yes, we could go cheaper (or more expensive for that matter), but this one looks like it fits our needs and tastes.

I haven’t had any of the standard traveler’s vaccinations since my RTW trip in 1998 so I thought it was time to see what I needed. After perusing the CDC site at length, I determined all I needed was the Typhoid vaccine (yes, this was later confirmed at the clinic). My mother also got a series of various vaccinations.

The cdc site reccomends Malaria prophylaxis for Siem Reap but we’ve decided not to take them this time. This is a personal decision, not a recommendation on my part.

Well, it’s going to be hot there, though December is considered the “coolest” and “driest” month so it shouldn’t be as bad a previous trips.

I’m bringing a 22″ rolling bag and I always pack most of my clothes into zip lock bags. Normally I would do carry-on only, but Thai’s weight allowance is very low.

Why is it that I always feel the need to buy a new carry on bag for each trip? I am on the constant quest to find the perfect bag. I guess my needs continue to evolve, and thus so do my requirements for the perfect bag.

This Eddie Bauer bag is the one I’ve settled on for this trip.

It does not look like much, but it has some really nice features. The bag can be carried with a shoulder strap or backpack straps, both padded. It has an interior sleeve for a laptop and a section that zips apart like an expandable suitcase.

This bag has to carry all my laptop, cables, camera, chargers, books, phone, toiletries, and extra change of clothes. I’ll also have an extra camera this trip I’ll be donating to the plf.org and since I don’t want to risk it disappearing from my luggage.

Laptop: I recently bought a used laptop for travel. It’s a Toshiba Portege R100. It weighs 2.2 lbs, has a 40G hard drive, 12 inch screen and built in wifi. It’s lacking a cd/dvd player, but that’s what you sacrifice for the light weight. I have magazines which weigh more.

Last time I traveled with a Palm Lifedrive PDA and a wireless keyboard. While this worked ok for text, it wouldn’t let me post to the website in real time and I couldn’t edit photos.

I’ve loaded Skype onto the computer and a very tiny webcam, so I should be able to both talk to and see David as long as I can get an internet connection.

One of the drawbacks to an old computer is an old battery. I could buy a new one, but it’s really expensive, so I’ll just have to settle for plugging it in. Fortunately, Thai airways has 110 electrical ports at every seat in premium economy (according to their website, I hope this is true!)

Website: The website is now created in Dreamweaver. This applies only to trips from Central Europe on forward. I use an FTP program called Firezilla to upload to the server.

Photography: I’ve been using a Nikon Coolpix 7900 since Oct 2005. This is a decent point and shoot digital camera. I’ve been looking a Digital SLR’s for the last 6 months or so, but haven’t been able to commit to buying one. I find myself increasingly frustrated with the P&S in low light situations and with being unable to adjust the focal point. Still, it’s what I have night now, so I’m bringing it.

Almost all photos get run through Photoshop Elements, cropped and corrected before I post them online.

Music: I think I may be the only person in the world who does not own an ipod.

However, I just discovered that my phone will play Mp3’s so I got a 2g micro-sd card, put about 180 songs on it (only half full!) and I’m ready to go. The functionality of the player is not fantastic, and I had to buy and adaptor plug to be able to use my noise canceling headphones, but it should work.

Unfortunately, my phone will not work to make calls outside of the US (thanks to my carrier, Sprint), but at least I’ll have use of it at the airport.

After the trip:I managed to do just fine with the clothes I brought. In fact, I did not wear any of the sleeveless tops/tank tops because of the mosquitos. I also only wore my sandals once. I found that the pavement in Bangkok was very uneven and the paths at the temples in Siem Reap the same and I stubbed my toe and tripped quite a few times. I was very thankful to be wearing closed toe shoes then. Otherwise, I might have broken something! I had a couple of pieces of clothing laundered in Siem Reap and washed out a few things myself. Overall, I was happy with my choices.

I really liked having the laptop with me. It’s so lightweight that carrying it was not a problem. During the day I locked it in my suitcase in Bangkok and in Siem Reap, it fit in the room safe. At night I was able to download my photos. I was also able to use it to get online and check email. I did have a couple of problems in places with the connection however-nothing is perfect. Still, I’m glad I brought it.

The new Eddie Bauer bag I bought for the trip worked very nicely as my carry-on on the plane. I never carried it during the day, but it held everything nicely on travel days.