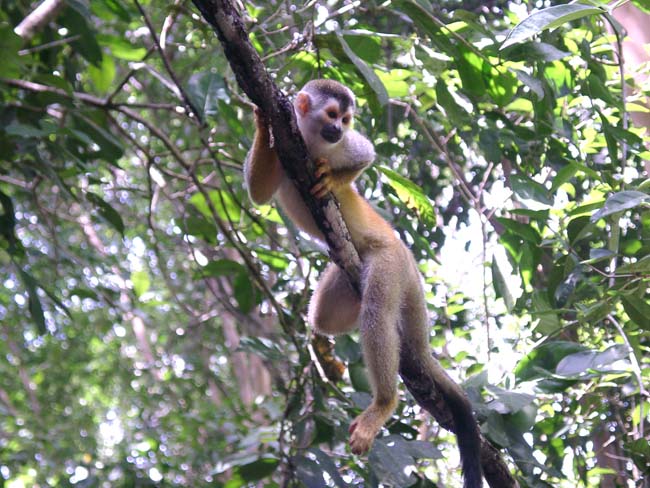 In August 2003 we took a trip
to Costa Rica to see volcanos,
beaches and amazing wildlife….

“Costa Rica? Awesome!”  That’s the general response I’ve been getting when I tell people where we’re going next. This is in stark contrast to “You’re going where?” or “Why?” when I told people we were going to Cambodia or Honduras. Even Sicily was met with a bewildered indifference as if most people knew it was Italy, but didn’t exactly know where it was or why you’d want to go there.

But Costa Rica, well, that’s different. Isn’t it the “Switzerland of Central America” after all? I guess people have heard of the jungles and beautiful beaches too. And yes, they have one of the highest literacy rates in the entire world. As long as it’s not “Central America, sanitized for your protection”, we’ll be fine.
Actually, it probably will be the sanitized version, since we’re only going for a week and we’re not exactly “roughing it”.

This is probably one of the fastest trips I’ve ever planned and it all fell together in the space of a week. I got approval for a specific week off and began a search of where to go. We considered Hong Kong briefly, even though we’d been there, since there were some amazing deals available post-SARS. But, nothing was available when we were. I also began hunting around luxurylink.com, trolling for ideas and possibilities. Costa Rica caught my attention and it was a place we’d always wanted to go. It has the benefit of a shorter travel time than Asia and no jet lag. There were also some great packages available.

Since we had a lot of frequent flier miles with American, I searched their web site looking for available tickets to San Jose Costa Rica. Nothing. So I called, hoping something would pop up. Again, nothing, which really wasn’t surprising since I was calling less than a month in advance and frequent flier tickets are usually long gone months ahead of time. Then I remembered they have an agreement with other partner airlines (we did this for Honduras) and asked about that. Yes, but nothing available. Hmmmm…what about business class? Yep. For 60,000 miles each plus $21 tax, the tickets can be yours. Before you say, “oh that’s mighty fancy-dancy of you”, let me explain that we weren’t flying American, but rather LACSA, a Central American carrier known for it’s high incidence of lost luggage rather than plush amenities.

So, we’re flying LACSA (the national airline of Costa Rica and part of the TACA group) business class. I don’t have high expectations, but it does have some benefits for the extra 15,000 miles each. First, the LACSA flights are the only ones direct from LA to CR, otherwise we’d have to go through Houston or Miami. The business class seats will be larger and hopefully more comfortable on our overnight flight which leaves at 1 AM. Hopefully there will be a nice lounge to wait in, and we won’t have to wait in the hellish lines to check in at coach.

Back on luxury link there were three or four Costa Rica packages available and we chose the one at a hotel on the mid pacific coast called Villa Caletas. Given our short time there and very little time to plan, it just seemed like the easiest thing to do. I bid on an auction package and I did get out-bid once, but finally came in as one of the winners. We got 5 nights in a junior suite with jacuzzi on the balcony, including breakfast, one dinner, and all taxes (16.4% in CR!) for about $700 total. The room rate is $190/night, not including any of the extras like taxes and breakfast, so I think it was a good deal. From here we can do several day trips including Manual Antonio Nature Preserve and beach. We can also just relax (it is a vacation, right?).

That left us with two nights and once I discovered that Costa Rica has the largest active volcano, I knew where we’d be spending them. Arenal Volcano has been erupting daily since 1968 and I knew this would thrill David who has always been fascinated by volcanos. After a little research at Arenal.net, I chose the Arenal Observatory Lodge, the only hotel inside the park, built originally as housing for Smithsonian vulcanologists. We reserved a “Smithsonian” room which is accessed by crossing a suspension bridge and have huge panoramic windows overlooking the volcano.  Near Arenal, in the town of Fortuna, are the Tabacon hot springs. There are also waterfalls, and canopy tours available. There are cheaper rooms to be had in Fortuna, but this place looked really interesting and since we’ll have a car it won’t be hard to get around when we’re there. One thing I did notice though, is if you don’t have a car while staying there, and you want to go on any of the local tours, it will cost you more to have them come pick you up out at the Observatory Lodge.

We’re going to rent a 4×4 for our time there since it’s the “green” (read, rainy) season. After a little research, I decided to go with a company called Tico travel. I chose them because the rates were the most reasonable and included all taxes and basic insurance. While we will only be there 7 days, we’ll need an 8 day rental because we’ll be picking up early and dropping off late. That extra day is really expensive. They also guarantee the exact vehicle you reserve, instead of “or similar”. After getting the crappy car in Sicily, I thought this was a good thing. When looking at rental cars in Costa Rica, make sure the price quoted includes daily mandatory insurance, tax, and if picking up at the airport and extra 12%. I found Tico Travel’s rates to be the best when all this was considered. Some of the other companies’ rates were the same as Tico’s before they added on all the extras. (Note; we did not go with Tico Travel after all, see below)

I called American Express and checked about their car rental insurance coverage. In Costa Rica, the “basic” insurance that comes with most car rentals includes a $750-$1000 deductible. If you want “full coverage” it’s an extra $13 per day. If we reserve and rent with an AMEX Gold card, we can decline the extra insurance and still be covered.

Finally, I did the bulk of my research online. The Fodor’s Latin America message board has a wealth of information about Costa Rica. In fact, it seems like every other question on there is about Costa Rica. I also bought the Lonely Planet Costa Rica guidebook.

LACSA is connected to TACA, so we were familiar with the area of the international terminal at LAX from our previous trip to Honduras. Armed with prior experience, we arrived early, prepared for the worst. We discovered that LACSA has no special line for first class or a first class lounge. We could have used American’s but we would have had to go to another terminal. Luckily there wasn’t a long line, though figuring out where to go was a bit confusing.

The plane was a smaller one, an Airbus 319. There were twelve seats in “first”, configured two by two. Coach was three by three. It wasn’t even close to first or business on any long haul carriers, but still better than the cattle car in the back.  It’s always nice to have a flight attendant ask you if you’d like a drink before takeoff and bring you a bowl of warmed nuts to go along with it. Of course, David took full advantage of the cocktails. We had Mystery Meat for Dinner at 2AM and no breakfast. Arrival was on time at 8AM and virtually no wait at immigration, no wait for the rental car driver.

Before we left, I found a better deal for the rental cal. We used Orbit travel who guaranteed they would be able to give us a new Toyota Rav-4. We saved the 12% airport surcharge tax by having their van pick us up and take us to an off site rental location  two blocks away, and we saved 50% off the insurance cost by using our AMEX gold card and declining the extra insurance.

After we picked up the car, we drove to nearby mall to get some colones from an ATM. The car had a CD player so we looked for music store, but nothing was open that early. This was especially frustrating since I’d asked if the car would have a CD player and was told “probably not”. We found no ATMs to work with our card which needs a cirus/MC logo, not Plus/Visa. Hungry, we ate a quick breakfast at Burger King (horrifying yes, but they took US dollars and we were starving). After that, we got on the road to the volcano…..