In August 2004 we took a trip to
the Big Island of Hawaii to see the volcano,
snorkel the beautiful warm waters, and relax… 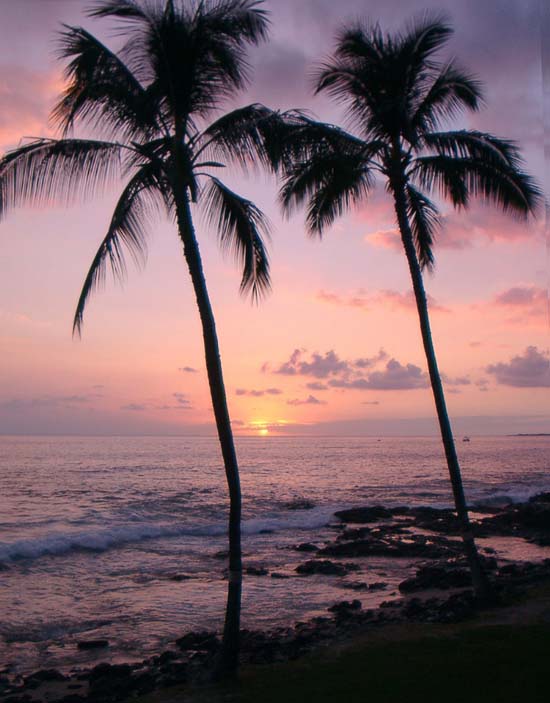 Hawaii-Day 1- Kona
Hawaii-Day 2- Kona Farmer’s Market, snorkling with sea turtles
Hawaii-Day 3- Snorkling, our one and only luau, complete with pig in a pit
Hawaii-Day 4-Day at the Volcano
Hawaii-Day 5-Kealakekua Bay and the Place of Refuge

I’ve never had such a hard time trying to figure out where to go on vacation in my life. First, we were going for two weeks to Vietnam, then I discovered the summer airfare to Asia is extortionist, $1300 per person LAX to Vietnam, unless you are willing to fly an extra 10 hours, including a layover in Korea, for $850. Since David was unwilling to fly Korean Air, and we were running out of time, I started looking a someplace shorter, and closer to home, like Mexico. We’d never been to Puerto Vallarta or Acapulco so we considered those places. By this time summer was half over and we had to shorten the trip to one week. I looked into Belize, but hurricane season had started early. Peru was even in the running for a while. I went so far as to create a spreadsheet breaking down the cost of all the trips to a per day cost. Then, we got word the volcano was putting on quite a show on the Big Island of Hawaii so that quickly became the new focus.

After looking at a number of packages, it still seemed cost prohibitive to go even for 5 nights and stay in a hotel along with the cost of airfare, car and food. Hotels have a minimum of four types of rooms in Hawaii, with the least expensive package always quoted first using a “mountain view” room. We’ve stayed in such rooms before, and even though the Four Seasons Maui is one of the nicest hotels in the world, spending that type of money for a view of the parking lot is not something I’d willingly do again. In fact, after that, we vowed for nothing less than a view of the ocean.

Next in line comes “partial ocean view” which could mean a sliver of blue sighted only if you lean dangerously far out over the balcony. “Ocean view” follows, with the top of the line being “Ocean Front“. The price difference between mountain view and ocean front can be upwards of $200 per night in most hotels. When the starting rate is $300+ for mountain view rooms, it adds up quick. Ok, so I like nice hotels, sue me. After all that, I realized I’d better look at other options or we’d be back to doing a car trip to visit relatives for my vacation.

I’ve never considered myself a “condo person”, but I was willing to look into it in order to save some money. Quite a savings it turned out to be. There are no shortage of condos for rent in Hawaii, the trick is finding something nice in a good location. One can either rent from a management company or directly from the owner. I liked the idea of renting from the owner because we got to see photos of the exact unit we’d be staying in and I even spoke to the owner on the phone. The downside is that most don’t take credit cards and you have less recourse if something goes wrong.

We wound up with a 1 bedroom oceanfront condo in Kona for $125 per night rented via www.vrbo.com. This is about 1/4 the price of staying some place like the Four Seasons. However, there’s no maid service, no expensive mini bar, and no marble bathroom. What we do get, is a list of amenities not included in hotel rooms like a full kitchen (no $50 hotel breakfasts), DVD player, beach towels, washer/dryer, and a nice lanai to sit on with the waves crashing below. The complex is within walking distance of town and has a pool with an ocean view. Frankly, I’d rather stay there than “Uncle Bobos” tacky, cheap motel. The condo would definitely be the way to go for families with children. Two bedroom condos, or even homes, can be had for less than $150 per night. If you’re willing to be a bit farther from the ocean, the price drops considerably.

As for airfare, it was in the $600 per person range from LAX to Kona. For some reason, the Big Island is more expensive than Oahu or Maui. Honolulu flights can be fount for as little as $300 r/t, but that’s mid week and you still need another flight to get to Kona. I was able to find a non stop flight on Expedia to Kona on United, and while I waited, the price went up! So I checked the United web site and for some reason, the price was coming in at $459 per person. Not believing it, I called United, and strangely, the fare was on sale for that day only so I booked it.

A similar thing happened with the car rental. I looked at all the individual sites for Hertz, Avis, Dollar, Thrifty, etc. and prices all varied widely. Thrifty had the lowest price by far, at least $50 less than any of the others for the 5 day rental. But when I called them, the price was much higher. When I was finally ready to book, I went to the web site and a compact car was coming up for $31 per weekend day with 3 days at $0.00 dollars. Weird, huh? No mention of a special offer, but I rolled the dice and booked it anyway. This saved another $80 or so. We’ll have to see if that’s what we actually pay (I have reservation printed out, so I think they’ll have to honor it).

So, flight, car and condo all booked. I believe doing it all on our own saved us some money over going with a package, though Expedia did have some good package rates. It just depends on how much time you’re willing to put in to doing your own research.

Usually I go with Lonely Planet or Frommer’s. This time, based on multiple recommendations, I ordered Hawaii The Big Island Revealed: The Ultimate Guidebook

. This is a series of guidebooks only for Hawaii, written by a couple who actually live there. They seem to be packed with information that “regular” guidebooks miss. There’s more on sightseeing and less on hotels and restaurants. There are photos of the best beaches and specific instructions on how to get there. So far, I like it a lot.

Before we went to Honduras to go diving we bought a lot of our own equipment, so I guess we’ll be bringing all our snorkel gear with us. I don’t anticipate diving (just the thought sends me into a panic) but I am looking forward to snorkeling.

Departure is only 10 days away….