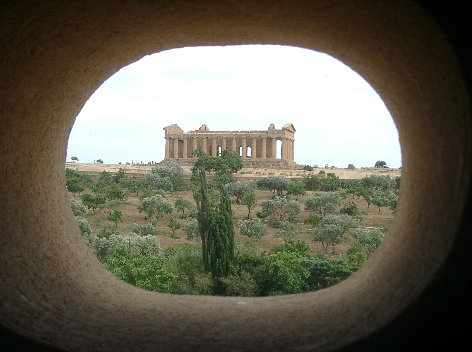 We left late, around 3 PM to head for Agrigento. Drive took a little over an hour and one could definitely do this as a day trip from Gangi (in fact the women from NJ did just that). As we drove into town I was amazed at how much I remembered from my time here 4 years ago. Then, of course,  we drove around looking for parking and once again got trapped in the maze of tiny streets. It's amazing how it just happens, even when you tell yourself, "I will not get stuck in those streets again".  Finally, we got out and managed to find a parking space in the piazza near the train station. We found an ATM, got more money, and started looking for a place to stay. There's not much nice up in the old town, though there are quite a few "budget" places. However, if you want a place with a view of the temples, or on the beach, head down the hill.
We started with the Villa Athena, the only hotel inside the archaeological park. I'd read good and bad things about this place and wanted to check it out. I thought it would be worth it for the view and a special place for my Mom. The rates started at  200+ Euro and quickly dropped to , 180, 160, 140 for small room with view of temple, if we paid cash. The hotel is run down and badly in need of paint and repair. I think it's skating by on it's reputation and the view, which to be fair, is absolutely spectacular. But don't let the romantics fool you, this is not "faded glory", it's just faded.
We left to go look at others for a quick comparison. Baglio della Luna turned out to be $240 for a tiny room looking onto a courtyard. We also looked at the Hotel Kaos and Hotel Eos, both with tiny rooms for $140 and $90 respectively, overlooking the beach. At that point we gave up and went back to Villa Athena and opted for the smallest, least expensive room. The desk clerk wanted to be paid in advance, in cash. I had to ask for receipt which was given to me on a blank form. I'm certain he pocketed the cash. I admit I'm a sucker for a room with a view. And we had an incredible view, even from the bathroom which was a porthole window (see photo at right).  Some of the rooms had balconies, but were well over $200. At night the temples are all well lit, though the park is closed for visitors. The view from our room was so stunning, I kept getting up in the middle of the night to look. Sunrise was equally impressive.

Running out of time, we opted for a quick trip to see temples, (4.50 E each) which were beautiful around sunset. 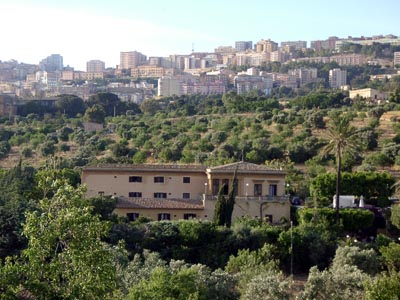 From the walkway along the temples, we could see back to the hotel and it's grounds. There is a pathway that connects the three main temples, Hera, Concord and Herecles. Along the way there are catacombs to peek into and a botanical garden. On the other side of the parking area are more ruins and about a mile away is a "Roman Quarter" still under excavation. This is my second time here and once again, I've seen neither, nor did I make the walk all the way out to the Temple of Hera. I guess I'm saving it for the next time. People are not allowed to walk through the Temple of Concord, in fact, if you get too close an alarm will go off. But, you can walk among the ruined columns of the Temple of Herecles, built in the 6th century BC. The sheer size of the columns are impressive and the view of the ocean over the cliff leads to visions of centuries of marauding invaders storming the beach. 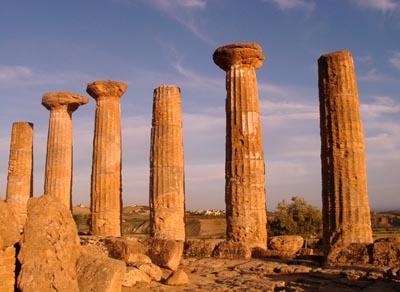 Our goal was to make it into town by 7:30 PM to find the Liberia Multimediano (listed in LP Sicily), a small bookstore, and apparently the only place with internet access. Fortunately, we found it in time and were able to use one of its two computers so my mother could transfer funds and access her money.
We had dinner at L' Ambasicati Ai Sicilia which had an outdoor terrace with excellent view. 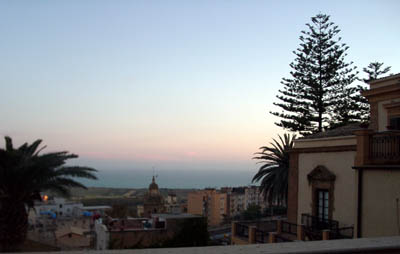 The food ok. We had a very young red wine, the vino della casa. We shared an antipasto rustico with grilled vegetables, caponata, pecorino cheese and bruschetta. I had the bistecca which turned out to be veal scallop with parmesean and tomato sauce. My mother had a grilled beefsteak and we had fries and spinach. All together it was 31 Euro, a pretty good value. After dinner we walked around the old town a bit. There weren't many tourists, but plenty of locals out for their nightly stroll. Lots of expensive stores to window shop in too, but nothing was open in the evening.