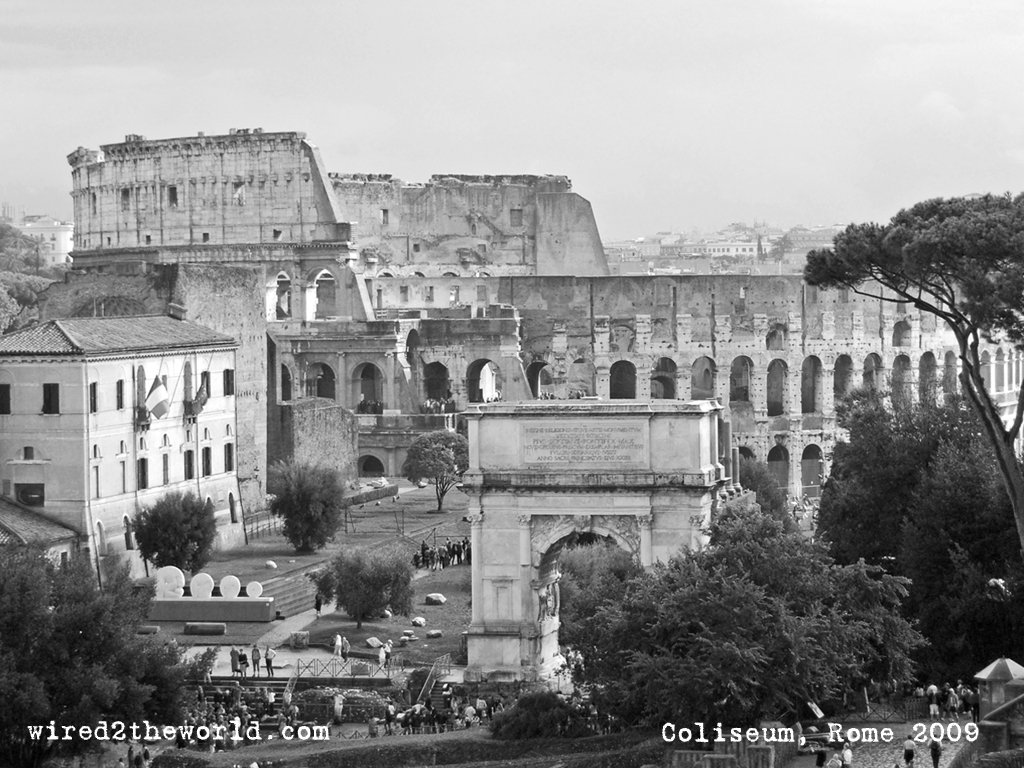 Rome Google Map– A map of all the restaurants and sights I researched for this trip and the one in 2008.

Back in April ’09, my mother told me she was considering going to Portugal by herself. I thought Portugal might not be the best trip to do alone, but suggested a trip to a single city like Rome or Paris. We had been to Paris the previous fall and I had been to Rome with my husband and friends the spring of 2008. I thought she should she seriously consider Rome as I had already done the research for her and she agreed. One thing led to another and suddenly I was going along.

We searched for airfare on United where my mom has Premier status and kept coming up with airfares in the $1200 range for our dates. Then one day I was on Twitter and came across a mention of an airfare sale to Europe on Delta with flights starting at under $300 R/T! I checked and sure enough, found tickets for LAX to Rome with a layover at JFK for $435 all in. It was crazy and after a flurry of phone calls and texts, not only did we have 2 tickets to Rome but my friends Jessica and Tris (who had gone to Rome with my husband and me last year), were coming too. Within 24 hours the “sale” was gone and tickets were $860+, the low fares never to be seen again.

With the tickets out of the way, the next thing to do was search for an apartment. We had rented with www.rentalinrome.com last time and very much liked the apartment we had. However, for this trip it was still a bit expensive and it didn’t have WiFi access which was important to my mom because of her job.

After looking at what felt like hundreds of apartments, we settled on one with www.sleepinitaly.comIt is located in Trastevere and on their web site called “Vicolo del 5 Angel”
The photos on the web site are very accurate. When we booked it the price was 150 € a night for 4 people. It has since gone up to 180 € per night. It has 3 bedrooms and 2 bathrooms and is very spacious and beautifully decorated. The kitchen is decent and has both a dishwasher and a washing machine (we used both). The beds were comfortable and had nice linens. The owner was very nice and clearly cared about the apartment and if the guests were happy (as evidenced by a small problem we had later on).

The bathrooms were fine, though the one my mom and I used off the kitchen had hot water issues (just not hot enough all the time). The owner said they are going to call a plumber to fix this and I believe them. This is a new vacation rental and they are still trying to work out all the kinks.

As it turned out, the apartment did not have “wireless” access. What it had was a router with a cable one could plug into the back of the laptop, but you had to be sitting in the living room for this. You would need the WEP key to gain access to the WiFi and I didn’t feel like trying to get that info or explain it to the owner, but I’m sure it could be had. Fortunately, in the bedrooms which fronted the street, there was unprotected WiFi access coming from somewhere which worked just fine (though not in the center or back of the apartment). I liked having this because I was able to Skype call with my husband every morning, plus check email, and post to Facebook and Twitter.

The only real negative was the noise. I’d read that Trastevere was “party central” for Roman and tourist twenty-somethings but I had no idea to what extent and that our little street was the epicenter. During the day it was fairly quiet, but the evenings and into the wee hours of the morning it was bedlam right below our windows. Then, at about 4am the trash and bottle collectors would start, along with the street cleaners. Seriously. It was quietest between 7 and 9 am.

We all really liked the apartment and honestly, the noise was the only issue. If you are a heavy sleeper then it might not be a problem at all. The double bedroom with en suite bath was very quiet, just the 2 bedrooms at the front were noisy. Personally, it didn’t keep me awake, but it did wake me up for a few minutes several times a night.

To be honest, I didn’t do my usual obsessive-compulsive planning for this trip. First, we had spent a week in Rome only 18 months prior so most of the research was done. Second, I had a 2 week trip to Vietnam in July which took up most of my planning time. And thirdly, we just wanted to make this a more relaxing trip.

For our last trip I had scheduled one “event” (museum, tour, or day trip) for each day. For this one, the only thing I booked in advance was a private tour of “Underground Rome” with Katie Parla  and tried to figure out what to see in a 3 day times pan to make the best use of the Roma Passes we intended to buy. I researched going out to Tivoli on our own (included in the Roma e Piu Pass) but we ended up not going after we determined that it was just too much effort. Also, when we went to buy the Roma e Piu Pass from the information kiosk in Trastevere we were told they had to be reserved in advance and we would not be able to buy them anywhere. This is a little fact I did not see anywhere on the Roma Pass web site.

So, other than the 1/2 day tour with Katie, and a loose list of museums, we had nothing concrete planned going into our week in Rome.

Finally, I want to give a shout out to a great web site which is loaded with practical information on Rome called www.roninrome.com Ron gave me some great advice about getting to Tivoli, though unfortunately I wasn’t able to use it on this trip.

I usually travel carry-on only. However, my friends would be checking their bags, so my mother and I decided to do the same. I was able to check my usual carry-on 22″ roll-aboard, and carry on a smaller rolling bag along with a day bag which held my camera.

My packing tips can be found here https://wired2theworld.com/travel-tips/packing/

Photography
I took 1010 photos in 7 days. I use a Nikon D40x DSLR and will be posting links to photos on my web site as I go. I process all the photos through Photoshop Elements before putting them on my web site and this takes more time than the writing. All photos on the web site were taken by me unless otherwise noted.

Technology
I travel with a old Toshiba 2 lb laptop. As I said above, I like having it with me to keep in touch and I was happy I was able to see my husband face to face via web cam on Skype every day. I also tried to download my photos to the laptop every day as a backup.

Personal Guidebook
From the information I put on a Google Map I made of Rome (restaurants and sightseeing) and information cut and pasted from various reports online, I created my own “guidebook” for Rome when we went last year.

This time, I updated it with our prior trip experiences and added new restaurant info on Trastevere and other neighborhoods we planned to explore. I arranged it by area or neighborhood, so if we were in some place and want to stop for a meal, it would be easy to find something.

This trip I took my Travel OCD one step further and printed out 7 pages of my Google maps to go along with each neighborhood. Then I manually numbered every item (all 115 of them!) on the maps so we could easily find each place.

This took a lot of time, but was really useful in the end. We rarely planned to go to a specific place to eat, but rather, would pull out my notes and walk to the closest place which looked good. Most of the time this worked well; there were a few times we got lost (Google is not perfect) or found four places in a row closed for lunch (opening hours tended to be missing from my notes).

I admit I’ve been spoiled in the last few years. Almost every time I’ve flown it’s been either in Business Class (tickets or upgrades gained with FF Miles) or at minimum in Economy Plus which offers extra legroom.
I was not prepared for the bone-crunching, soul-sucking experience of Delta’s Cattle “Economy” Class. I’m just shy of 5′, 4″ tall and I have no idea how anyone taller can withstand it. The seats only recline about 2″ and when the person in front of you reclines it is impossible to reach the bag under the seat in front of you. The food is barely edible. I recommend bringing snacks along.
The only positive is that the interior of the planes have recently been renovated and the seats, while tiny and close together, have new blue leather upholstery and individual seat back screens with video-on-demand. This meant that though I could not sleep, I was able to watch over 10 movies (with the ability to start and pause on demand) during our trip there and back.

Kristina was quoted in Fodor’s Italy 2010