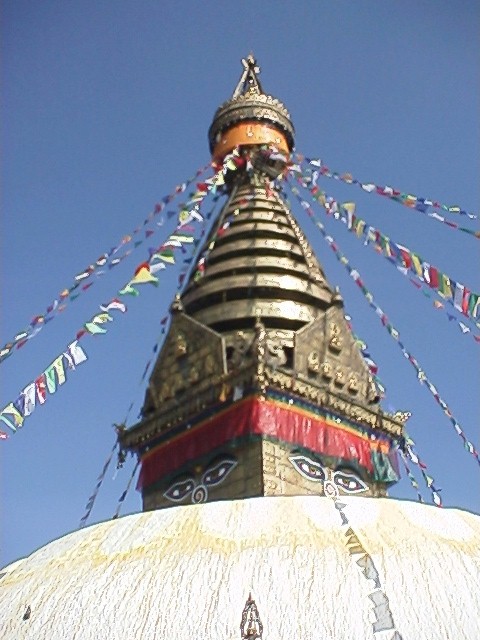 Today we took the Swiss Bus from Pokhara to Kathmandu. Thus, we learned the benefit of trusting your guide when he recommends a different bus company. But, alas, we booked this bus ourselves, from the guesthouse, after Hiran left. There is nothing “Swiss” about the Swiss bus; it is not nice and clean, and it does not run on time. Actually, it wasn’t all that bad and the driver did a fairly good job not running us off the road as we saw with another bus that had a head-on collision with a truck.

We are back in Kathmandu and back to the lovely Kathmandu Guest House. One of the best features of the hotel is the Communications Center which offers internet terminals, faxing and international phone calls. They also allowed us to use their fax line late at night to call our iPass and upload to the web page. We are still amazed that from Nepal we can log on!

This morning we met up with Hiran and Tikka and paid them the rest of their wages for the trek. We wound up giving them a little extra because we felt that they were well worth it. Hiran gave us a book he keeps for his “clients” to write in, giving recommendations, if they want. We wrote three pages full of praise, and again, highly suggest that anyone considering trekking in Nepal contact him.

Hiran and Tikka went with us to see Pashupathinath Temple and the cremation Ghats along the river. Along with the Hindu temple which is thousands of years old and an important pilgrimage site and the ghats are another series of smaller temples higher up on the hill.

In front of many of these temples sit Sadhus and Indian snake charmers. The sadhus are supposedly ordinary men who have given up all of their worldly possessions to embark on a long journey or pilgrimage. They usually let their hair grow into long dreadlocks, paint their faces with symbolic colors and stripes, and depend on the “kindness of strangers” for their support. They also tend to smoke the “holy” marijuana. Nowadays, they usually pose for photos for money from tourists.

There is one well known Sadhu in Kathmandu we’ll call Penis Man. Penis Man is known for being able to lift a large rock off the ground with a string attached to his penis. We were offered the chance to see this miracle, for a fee, along with “photos ok” and we politely declined. To be fair, Dave wanted to do it but, I didn’t really feel that this was something I needed to witness in order to fulfill my journey to Nepal. We also saw a few “snake charmers” complete with the requisite flute, basket, and cobra. I took a photo from a distance and kept on walking. The snake charmer’s flute playing became erratic as he tried to get our attention so that we would give him some money.

The cremation itself was not as macabre or grusome as I anticipated. Given, we saw no actual dead bodies. What we did see was essentialy a 3 hour funeral on the edge of the river and a large fire burning from an earlier cremation. We were told that the location of the cremation depends on the caste of the deceased. Weathy families hold theirs on the upper side of the river bridge, lower castes, downriver. The ghat highest upriver is reserved solely for the Royal family.

Surprisingly, there were many local onlookers, not just camera-toting tourists. I asked Hiran why the locals outnumbered the tourists 10 to 1 and he replied,  “many people out of work, nothing to do”. Also, because the deceased was from a wealthy family, so the spectacle proved interesting even for them. It seemed that the ritual went on forever. The family arrived bearing a casket, the first sign of wealth, besides being upriver. The mourners came in their everyday clothes, not black, not white and had to wait for other creamation to finish burning. While waiting, there was an endless stream of mourners coming to bring flowers and gifts to the casket. We watched as they shaved the heads of close male family members.

At first, I was surprised that there were no tears, thinking that maybe sentimentality was not part of the culture. Then, the wailing began, by some of the women surrounding the casket. Particularly by one woman, who was probably the young man’s mother/sister/or wife. I was so moved by her grief I couldn’t help crying myself. We waited for the first pyre to burn itself down, watched as they washed off the ghat, blessed it, and set up the logs for the next cremation. At this point, they went to get more logs and we couldn’t stay to watch the finish. Apparently, the lower caste cremations are not as elaborate nor as long.

That night we had dinner with Hiran and Tikka at the New Orleans Restaurant. We went there because Hiran is a vegetarian, something we learned about him while trekking. He told us he was born Hindu but converted to Buddhism because he was vegetarian and Hindus practice live animal sacrifice.

Today we left time for packing and shopping. We bought some new clothes, down booties, handmade paper goods, coloring books and a cool “wizard hat” for David to use in his classroom. I also bought a 250 million-year-old rock/fossil of a sea shell for David’s little Xmas present. These fossils abound in the Kaligandaki riverbed valley up north of Jomsom where we trekked. The man who I bought it from asked me why I didn’t find my own when I was there and I replied that I had been too tired just walking to look for fossils.

The Kathmandu Guesthouse held an expensive buffet dinner and cultural show which we did not attend. However, at the front desk, in all the guest’s key cubbyholes, were our Christmas presents from the hotel; traditional Nepali hats in black with the guesthouse logo on them. Very cool.

Have you been to Nepal? Thinking of going?
Leave me a comment at the bottom and make my day!

Taking the Virgin First Class Train from Glasgow to London

A First Timer's Guide to Planning a Trip to Egypt