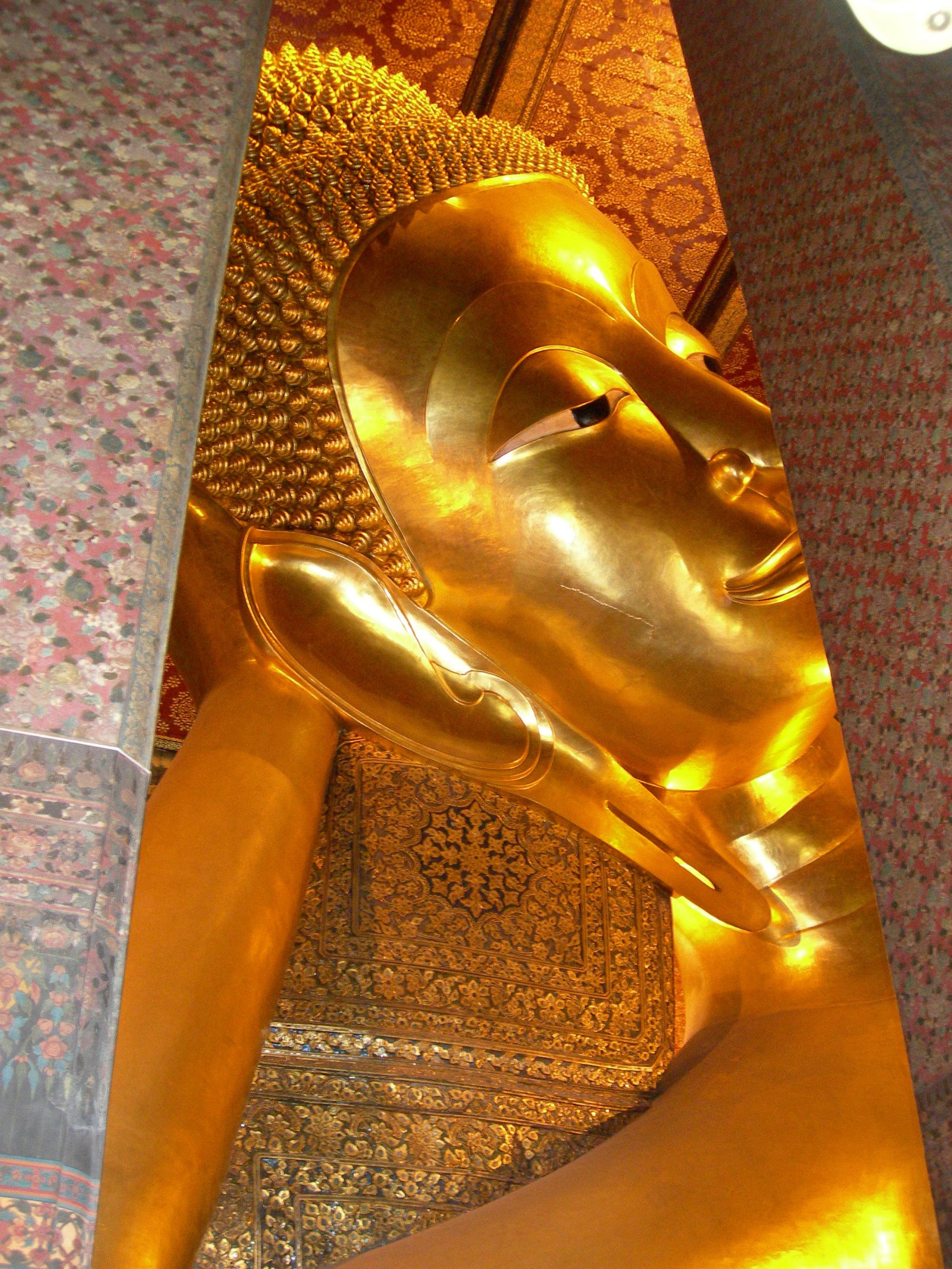 Royal Air Nepal flight 401. Not too bad, really. For some reason, we wound up in upgraded seats, the Nepali version of business class. However, it was an upgrade in seats only. Bad service, mediocre food, and no movie. Lots of turbulence, making me nervous. We were thankful though that at least the flight wasn’t canceled, as Royal Nepal has a reputation for this. We changed the bulk of what was left of our Nepali Rupees back into US dollars at the airport (the only place in the country where this is legal), and spent our last rupees on overpriced chocolate.

When we got to the airport we noticed that the official, pre-paid taxi to downtown Bangkok was 650 B!!! Instead, we walked upstairs to the departure floor and took a metered taxi for 280 B.

We’re back at Asia hotel. Dave is in his secret spy/super telephone man mode.

But we have success! A common thing in the hotels here is a control panel in a bedside table with switches that control lights, piped-in music, hard-wired phones. After detaching the cover, pulling out a few wires, we prevail.

Sneeze. Sniffle. Hack. Cough.
My cold, which never completely went away, has returned in full force, causing me to spend an entire day in bed. This is getting old.

We managed to meet up with Libby, with whom we trekked in Nepal, and who was her way back from Nepal home to Australia. We took her up the river on the boat and felt like locals as people asked us for directions on how to use the river buses. We walked past the famous Oriental Hotel and decided to go inside to take a peek and they wouldn’t let us in! They stopped us at the front door and said if we weren’t guests, we couldn’t even go in for a drink!
Insulted, we left, vowing never to stay there, even if we became millionaires.  🙂

Next, we went to see the Royal Palace and the Emerald Buddha. The Royal Palace houses all of the ceremonial rooms of the Royal Family. However, there were no personal rooms in view, used or unused and that was a disappointment. We took no photos because there were signs everywhere saying “No Photo”, although there were tourists doing so everywhere. The Emerald Buddha is actually made of jade and is only about 2 feet tall. But, it sits atop a huge, ornate, golden pedestal.

After the Palace, we went to Wat Po, the oldest and largest wat in Bangkok. It houses the Temple of the Reclining Buddha, a 46 meter long, gold-covered statue. Again, no photos, but we did take a picture of a funny sign we saw for a toilet.

Note from 20 years in the future; the large image on the left is of the Reclining Buddha, taken on a later visit in 2007.

Wat Po also contains a massage school which we had been told by Steve and Julie was wonderful. So, Dave, Libby and I took a number and waited for over an hour for our turn to be pulled, twisted, and pummeled. It was wonderful and different than any other massage I have ever had. I hope we can go back when we return to Bangkok.

For those of you who are techno-junkies like we are and are planning a trip to Bangkok, we have discovered a great cyber cafe in midtown. It’s called Byte in a Cup and it’s in the Siam Discovery Center mall on the 4th floor. They have excellent coffee, good rates, and two computer terminals. But the best thing is that at almost every table, built into the floor, is a phone jack and a power jack to plug in a laptop. We discovered this after we continued having a difficult time getting a strong connection when we tried to upload from the hotel room. When we brought the computer to the cafe and logged on we got the highest speed connection of the entire trip, 44,400 bps. We uploaded text and photos in record time, all while having a cappuccino!

Have you been to Bangkok? Thinking of going?
Leave me a comment at the bottom and make my day!

What to Wear in Egypt; a Packing Guide and Tips for Female Travelers

How to see the Pyramids in Egypt; Saqqara, Dashur, and Giza