Today was a day of running errands for the foundation, but it was fun and interesting. The first order of the day was a visit to Tchey School to deliver some school books and take a look at the school.  This school is the model of what all the schools have the potential to be, yet at the same time there is a cautionary tale to be told.

Tchey school has been the recipient of a lot of attention and donations, from the PLF and from numerous organizations. While it has benefited from the donations with the building of new classrooms, library, kitchen and other structures, it has also suffered from the short-attention-span syndrome of many organizations. What you don’t hear a lot about in the world of charities is that many come in, build something, and then leave with no plan in place with how to deal with the expense of running it after their departure. This can be seen in the numerous buildings which currently sit empty, not being used for their original intent. One of the reasons I admire what the foundation does is that they are in it for the long haul and have a long term vision for each school. It’s not about a quick fix for Ponheary or Lori or the foundation.

Check out the slideshow above of photos from the school.
This is a new format, let me know what you think!

We walked around the school, and the kids were playing outside and sitting at their desks while all the teachers had a planning meeting about the beginning of the year. Imagine that happening in a public school in the US. We saw a special classroom built by the Japanese to educate high acheiving local kids in the Japanese language and school system. These kids later go to college in Japan and usually stay to work there. We also saw a kitchen set up by another organization to provide breakfasts for the school kids but unfortunately, the funding for the food has disappeared so the kitchen is not in use.

One of the things which really impressed me was the school’s rice field. The rice is grown organically and fertilized by a flock of ducks which live at the school. It would make a nice neat story to say that the kids grow this rice to feed themselves this organic, sustainably raised rice,  but that’s not exactly accurate. They grow the rice, thresh it, pound it into highly prized flat rice, and then sell it so they can buy four times the amount of conventionally grown rice. And that’s the way they feed themselves and their families.

After our visit to the school we went back to the guesthouse and then down to the large central market with Marina Ly to get items off a long list of things needed for the girls at the Srayang house. This market is not the one in the center of the old part of Siem Reap which is mostly filled with tourist souvenirs, the Central Market is filled with food, household goods, fabric and other things the typical local family might need. Marina had all of her favorite vendors to visit, and while she probably could have done this without us, it was nice to feel like we played some part in choosing what kind of things the girls might like and making sure we got everything on the list; washcloths, shampoo, clothespins, hangers, even cotton bras with cartoon characters on them. 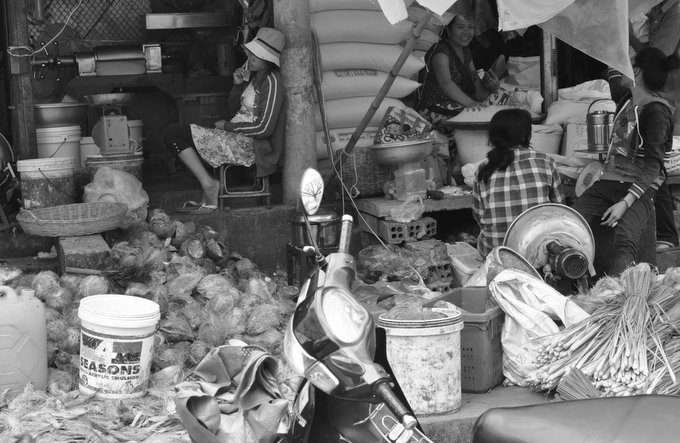 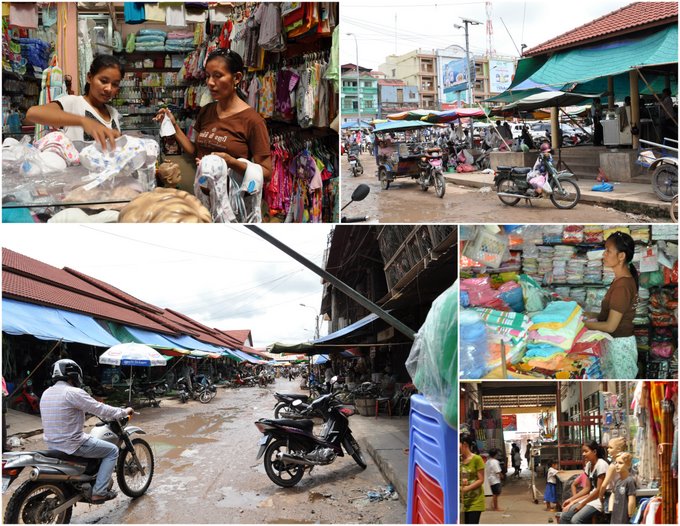 After shopping for the girls, Marina took us through the food section of the market where we saw everything from local sausages, to duck eggs, vegetables of all kinds and pig heads. 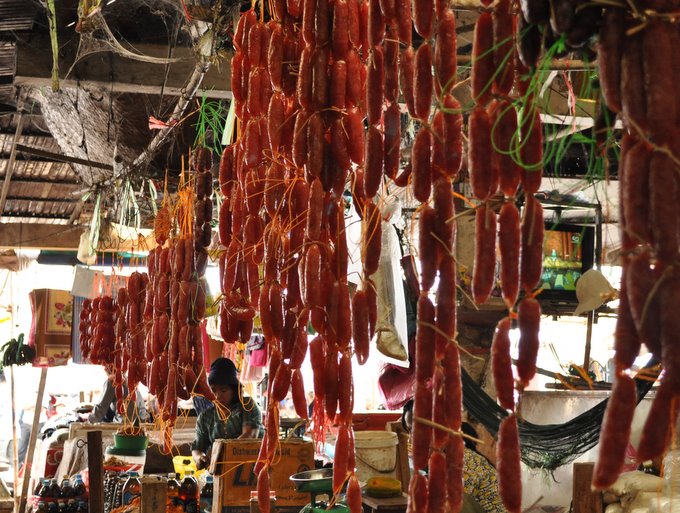 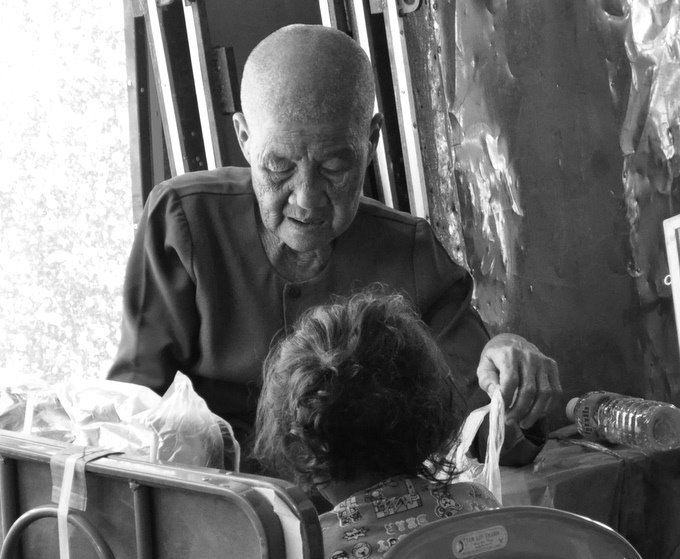 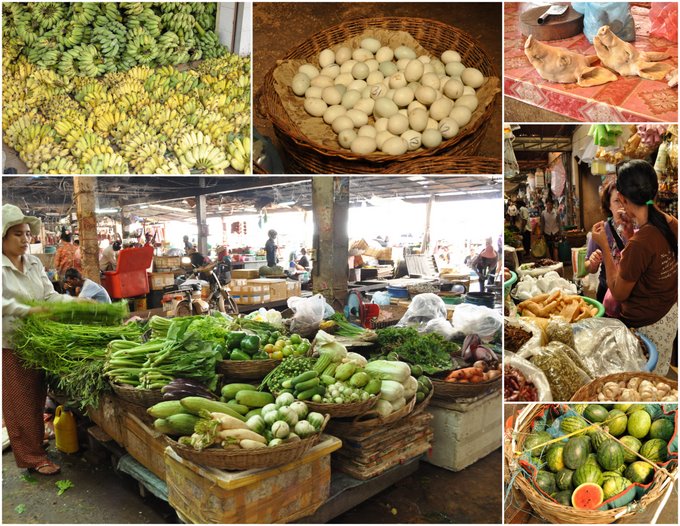 For lunch, we went back to a place which would certainly be one of my favorite restaurants to eat at in Siem Reap if I lived there; Irrawaddi. This Burmese restaurant is about 3 blocks down Wat Bo Road from the guesthouse and the food is not only delicious, but very consistent. Today was pretty much a repeat of our previous meal with the tea leaf salad, morning glory salad and rice with tea leaves and mung beans.

In the afternoon I took some photos of two of the Ly children who live in the guesthouse,  Alice and Yaya.

For dinner my mom and I went downtown with Lori and Lynn to a vegetarian restaurant called Chamkar on the Passage off Pub Street which has some of the best food in Siem Reap, meat or no meat. The spring rolls were fresh and flavorful, and the baked tofu, noodle and eggplant dishes we had were all fantastic. Judging by the name on the business card, the owner in French, but the food is all Khmer influenced and that combination made for a lovely and well executed meal. 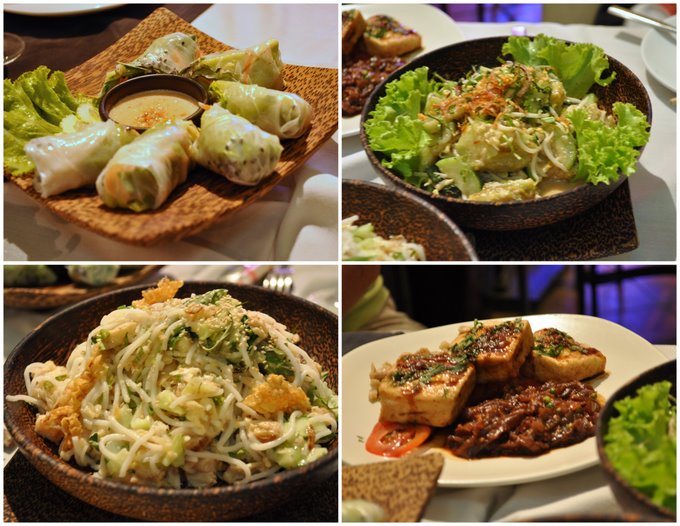 It had started to rain when we arrived, and when we left, the Passage had become a river and the sky was dumping rain in buckets instead of drops. I took off my shoes and ran to the waiting tuk tuk. In the half block between the restaurant and the street I was drenched to the point of having to wring out my clothes when we got home. I could not have been happier…

On the Rails in Battambang, Monks Trump All