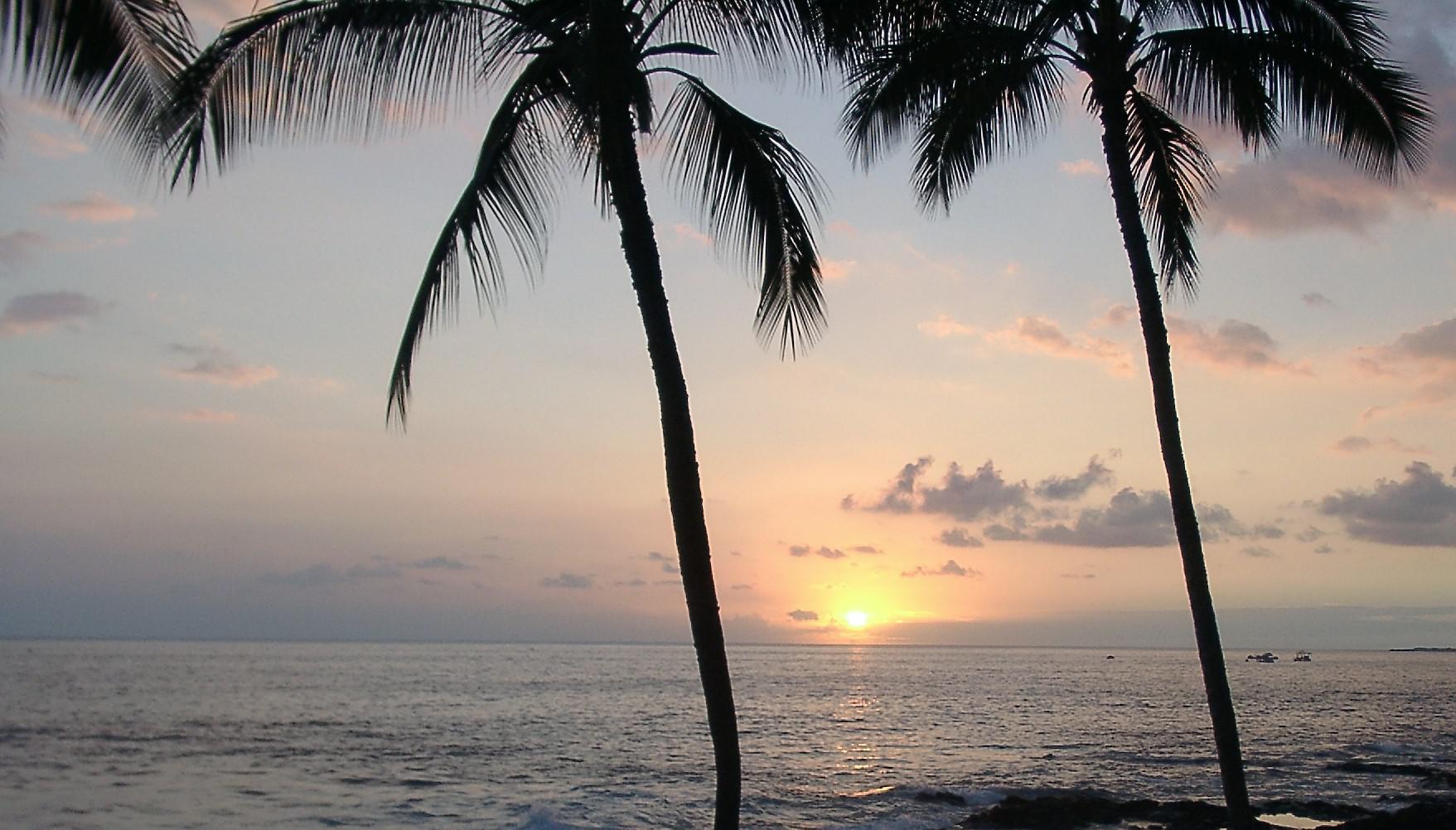 I wish that I had had the time to write in the last nine days so I could possibly convey how absolutely chaotic they have been.  Our Bon Voyage party was so much fun we needed an entire day to recover afterward. We had our last visit to the travel doctor for last Hepatitis shot, Larium for David (I refuse to take something with such horrific side effects), and some syringes and needles with a doctor’s note just in case.  We also did something we had never done before; we wrote wills. We wrote medical powers of attorney and “living” wills. We had them notarized.  It was a sobering experience. Our last two days were a whirlwind, complete with a 300-mile drive around Southern California. First to San Diego to drop David’s car with his parents, and then up to Palm Springs to drop off my car with a friend the day before we left. David’s parents generously decided to give us an early Christmas present and bought us a new modem for the Libretto. Of course, as soon as we got home, I tried to install it. No such luck. Then it was a race to the store to exchange it. Again, we had more difficulty installing the software! Five hours before we were supposed to leave I was still on the phone with tech support trying to get the thing to work. Finally! It worked. Once. Let’s hope it works again.

Finally, it was time to go to the airport and we learned the first of many lessons I’m sure. Always call the airport to confirm that the plane is on time! We got to LAX early only to discover that our flight was 2 hours delayed. But since my mother and some there to see us off, we decided to wait and have some overpriced food. After a few hours and a very tearful good bye, we were off!

I’m ready to do a commercial for Air New Zealand and unpaid at that! They have to have the most comfortable economy class of any airline I’ve ever been on. The seats have footrests, headrests, recline more and have more leg room. The food was ok and they even have decent New Zealand and Australian wines. The staff was genuinely nice. We were also fortunate that the plane wasn’t full, so we had room to lay down and sleep a little.
I wish I could be so glowing about the Honolulu Airport Hotel, or the Hotel Formerly Known As the Holiday Inn. We had an ugly room, overlooking a parking lot and the  hanger. It smelled like smoke and the unwashed masses and it wasn’t even a cheap room! We had an even worse breakfast.  Today we go to Kauai and a much nicer hotel, the Sheraton, to celebrate our upcoming wedding anniversary.

August 31, 1998 Waimea Canyon, the Grand Canyon of the Pacific

It was up with the sunrise this morning, due I’m sure to the three hour time difference.  The view from the room is beautiful and I couldn’t resist a few pictures…

Then we were off on a quest to find breakfast away from the hotel that wouldn’t bankrupt us. We also knew that we wanted to see Waimea canyon so we decided to drive toward there. On the way, we found a great local place to eat.  It’s called the Camp House Grill in Kalaheo and we had great breakfast for $13 tax and tip included. Not bad, considering that $13 won’t even get you one continental breakfast at the hotel.
After we ate, we drove toward Waimea Canyon and then the steep, narrow, winding road to the various lookouts.

We first said, “Oh we won’t drive up the whole way, it can’t be that interesting.” But it was beautiful, and we found ourselves driving further and further. At the top, it started to rain or we would have walked on one of the many short hikes offered. From there, had it not been locked in by rain, we would have seen Waialeale Mountain which has the most rainfall of anywhere on the planet. Unfortunately, all we could see was a well-weathered sign that pointed the way to “wettest place on earth.”

We had a fabulous dinner at a restaurant in Poipu called Roy’s where I had the opportunity to talk to the 22 year old chef, John Sikhattana. We had 4 different appetizers instead of eating the pricier entrees; shredded Hawaiian pork ravioli (which were actually steamed dumplings) with citrus cured salmon and tomatoes; coconut crusted shrimp with a spicy ginger cocktail sauce and marinated cucumbers; szeschuan baby back ribs that were sweet, spicy, and salty all at once; and blackened seared ahi with a soy mustard sauce. Great service too.

If the early settlers had known what lay beyond the western edge of the new world,  then this place might be like Los Angeles is today.  The island of Kauai lives up to its name and reputation in every way, and then some.  Our room boasts a spectacular ocean view and the pool is directly beneath us.  The weather is idyllic.  This is one of the only places where I have seen the rain come and go so unobtrusively. This morning,  Kristina and I watched a dark wall of rain and clouds as it approached menacingly from the sea,  only to leave the lush foliage glistening in the sun, more beautiful than before, after ten short minutes.  Tradewinds blow forcefully as if to keep the line of clouds from loitering in one place for too long,  but the breeze is warm and comfortable.  Kauai is as close to paradise as I can recall having been since Kristina and I were in Paris last October.  The locals are all very friendly and warm, unlike some Parisians, and I do not feel that their hospitality is insincere.  Granted, the island economy depends on tourism for survival and prosperity,  but the welcome is genuine and without resentment.  Hawaiians are a proud and strong people.  The only person who has used the word Howlee (a.k.a. Gringo, Gai-Jin, etc) during our stay was a mainlander, in reference to himself.  I imagine that it is a little different in the lineup for waves at any of the good surf spots.  Whereas the locals may willingly share their island and their cultural history,  they are less inclined to share their most precious gems: the best surf in the world.

Kristina’s Journal:
September 2, 1998 Three Years and Counting…
Yep! Three years of wedded bliss today. Yesterday we saw something called the Spouting Horn. This is a place on the beach where the waves crash against the lava rocks, woosh up through a big hole, spouting like Old Faithful, while at the same time, a smaller hole creates a loud baritone. Very cool.  Last night we went to dinner at the Koloa Broiler in Koloa Town where you cook your own food on a big grill inside the restaurant. They have steak, fish, ribs, etc. It was a novel concept but overpriced for what you got (your meat, paltry salad bar, rice, and baked beans and bread). I did get my kitty fix though. There are a few stray cats that live around the restaurant and one sweet little female came up to the table while we were eating. I shared my pork ribs with her and was pleased to learn from the waitress that no one lets her go hungry.

We woke up early this morning and went down to the pool for a “free” one hour SCUBA instruction. The instructor was more interested in teaching the people that were actually paying to go out later in the day, so he just handed us the tanks, showed us the regulator, and said, “have fun in pool.” It was good though, because it helped me get used to breathing through a regulator in my mouth.
Later in the day, rented snorkel gear and went out on the other side of Poipu beach. It was like swimming in a giant fish tank at an aquarium. Amazing, beautiful, colorful fish swam all around us. Now I’m really looking forward to Fiji. We will try to get an underwater camera and eventually get those pictures posted.
For lunch we went back to one of the best submarine sandwich places I’ve ever been to. It’s called Shipwreck’s and it’s in the Poipu Shopping Village. For less than $9 we had a giant roast beef sub with everything on it and a drink.

September 3/4/5 Could Someone Turn Off That Hawaiian Music???

We’re sitting here in the Honolulu Airport, waiting for our flight to Fiji. We got here four hours early, unfortunately, because we had to return the rental car on time so as not to be charged an extra day. More unfortunate is the unending Hawaiian music that pervades everywhere in the terminal over the loudspeakers.

Last night’s dinner was very good at a restaurant called Piatti right across from the Sheraton. Italian/ Hawaiian/ Asian if you can imagine that. We had an excellent wine, Calera Central Coast Pinot Noir, 1995, 20th Anniversary Vintage from Hollister, CA  for all you wine buffs out there. For our good friends who live on the central coast, you should look for this wine.  The food was good too; Beef Carpaccio with greens and Kau Orange-Shoyu jus; Insalata di Mare with grilled shrimp and scallops, green papaya, avocado and lemongrass-cilantro dressing; Maile Affumicato which is Green Tea and Vanilla Smoked Pork Tenderloin, grilled on Sugarcane Skewers with Plum and Tamarind Glaze; and lastly, Crusted Ono with Gorgonzola Sauce, Roasted Maui Onion and Tomato Sauce and Mashed Potatoes.

This morning we were up and out early to go snorkeling one last time before we left. We saw tons more beautiful fish, including the multi-color parrot fish (my favorite), trumpet fish, and a sea cucumber.

Then it was off to pack up and get out of the room by noon.  We asked for a late checkout, but they wouldn’t budge. They would, however, store our bags for the day and give us a “hospitality room” for an hour when we returned. So we took that expensive convertible and went driving the island in the pouring rain. We saw Waimea Falls and a lot of green mountains shrouded in mist.  A point of information: Hawaiian Airlines runs so many shuttle flights between the islands that they will gladly put you on an earlier flight if you arrive early and they have space. We did this.

If you’re wondering why there are three dates for this entry it’s because we’re about to lose a day by crossing the international dateline. Actually, we get to have the 4th of September for all of 45 minutes. We depart Honolulu at 12:45 AM Sept. 4th and arrive in Fiji at 5:10 AM Sept. 5th. The flight is 6 hours, 20 minutes. You do the math.

THINGS WE DID TO SAVE MONEY:

THINGS WE SPLURGED ON:

Disclaimer: Any post on this site may contain affiliate links. If you use them, they cost you nothing extra but we may make a small commission to help support this site.

Visiting the Arc de Triomphe and the Paris Sewer Museum