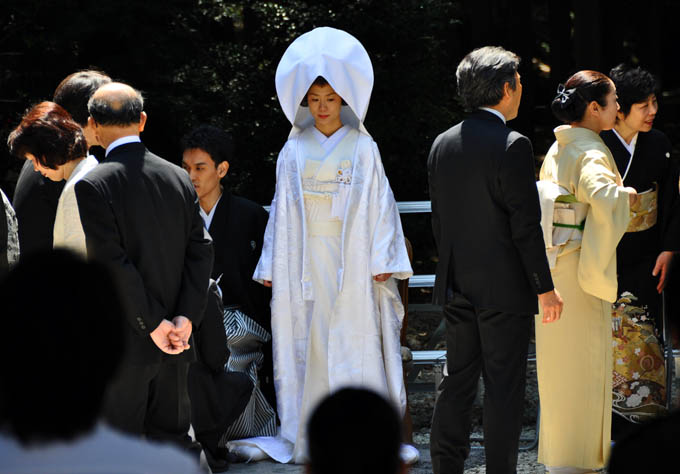 As part of our airline package we had a half day tour of Tokyo. I contacted the travel agency before we left, looking for details about what was included in the tour and they automatically booked the tour for us for the day after we arrived, without asking. Fortunately, we decided that doing this on our first morning would be the best time anyway.

Can we learn to love the bus and follow the leader?

This is the same tour offered by just about every travel agency and booked through Grey Line Tours. It normally costs 4,000 yen per person and includes a visit to the Tokyo Tower, the Meiji Shrine, a drive by of the National Diet building and Aksaka Guest House, and a final stop at the Imperial Palace garden. Typically we would not choose to do this type of tour, but since it was included, we thought it might be a good introduction to the city. Plus, I wanted to see if I was missing something by usually avoiding the “get on the bus and follow the tour leader” type of tour. 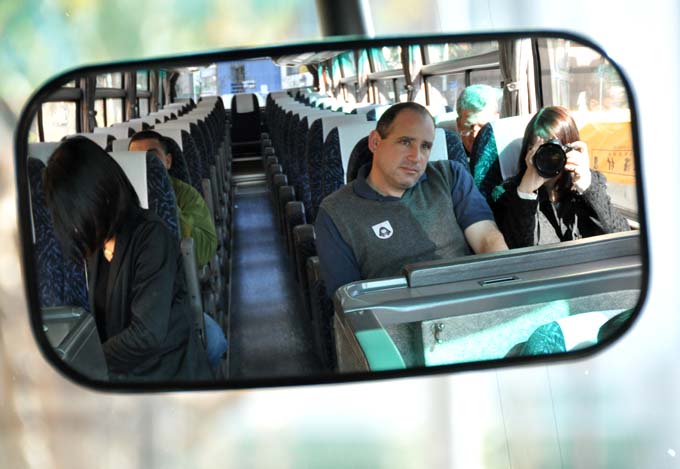 The pick-up time at the Hilton is at 8am. There was some confusion about our guide (one showed up, but we weren’t on their list), but they took us anyway, because as I said, every company uses the same tour in the end and no one else showed up for us. We spent almost an hour driving across town with one stop at another hotel to pick up more passengers and then a stop to change buses (split into half day and full day tour groups). This would have bothered me if we’d paid for the tour as it seemed like a huge waste of time. In the end, there were only 12 people in our group. I asked the guide if this was typical and she said no. Typically they would have 60-80 people at this time of the year, and in the past month she had days with only one or two people because of the downturn in tourism. We were extremely happy not to be on a bus with 60 other people. 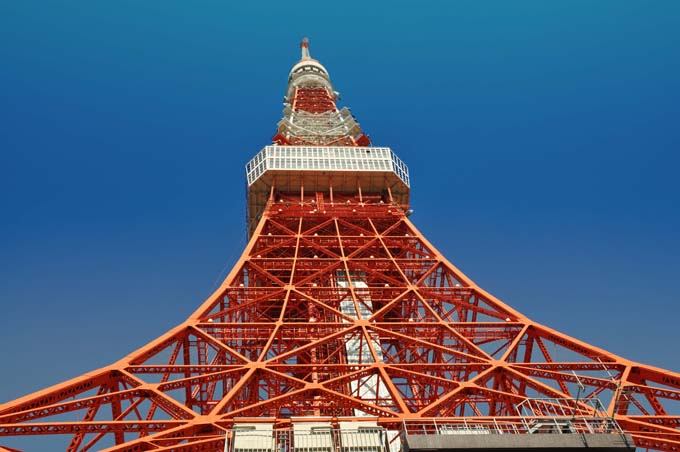 Our first stop was the Tokyo Tower, a bright red copy of the Eiffel Tower, built to house communication equipment in 1958. We were taken by elevator to one of the viewing platforms and the guide walked us around, pointing out various landmarks and buildings in the slightly hazy view. On a clear day you can see Mt Fuji from here, but it wasn’t really visible to us today. There are other things to see at the tower, including an aquarium and a floor with souvenir shops and restaurants, but we didn’t see any of it. We were scheduled to have another 45 minutes there, but because the group was so small, the guide went off-script and gave of the choice of staying at the tower or visiting one of the neighboring temples. Thankfully, everyone agreed to a change. 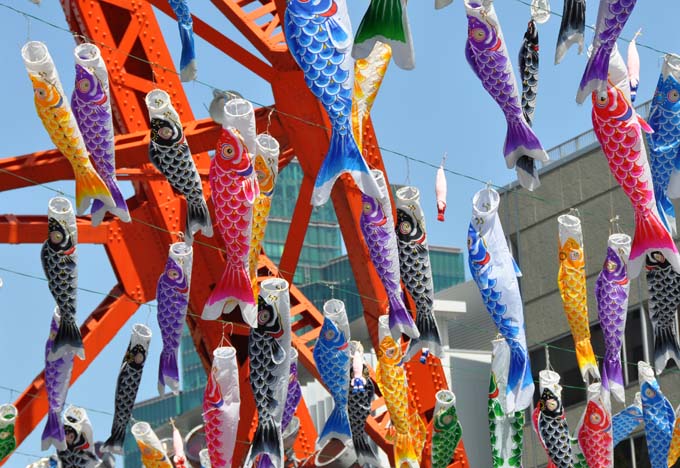 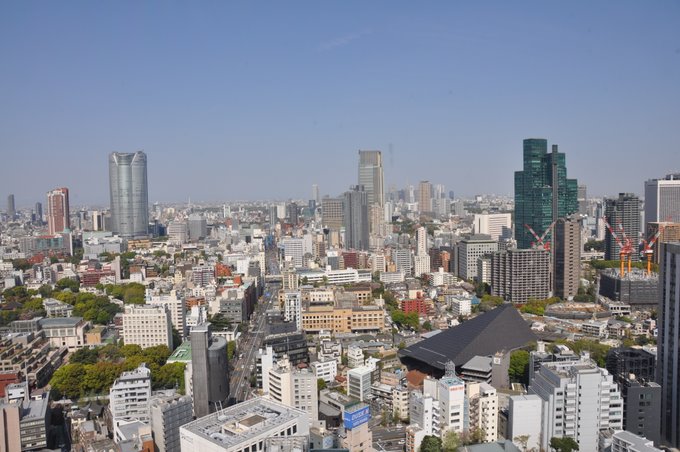 We walked through a section of Shiba park to the Zojoji Temple which was built by the Tokugawa family in 1393 and moved to this location in 1598. Inside the temple grounds we saw the Daiden (the main hall), hundreds of jizo statues placed there to commemorate and protect children who have died before their parents, and the Sangedatsu Gate (the main entrance), a massive structure by which passing through its doors one can rid themselves of greed, foolishness and hatred. Of course, we exited through this gate and all wondered about the ramifications of exiting and not entering. There was also a flea market sale going on while we were there. 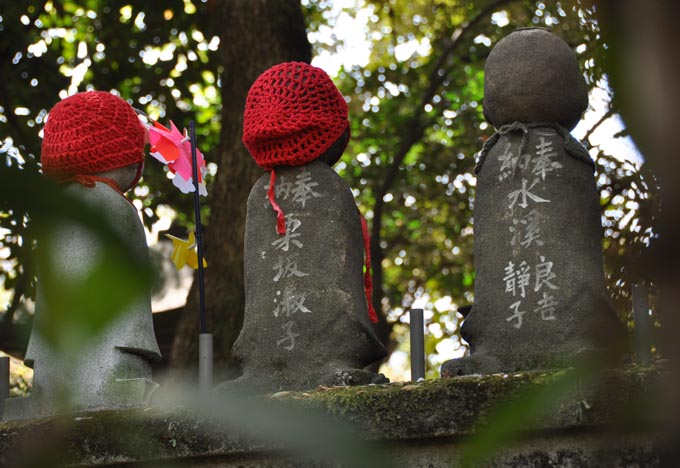 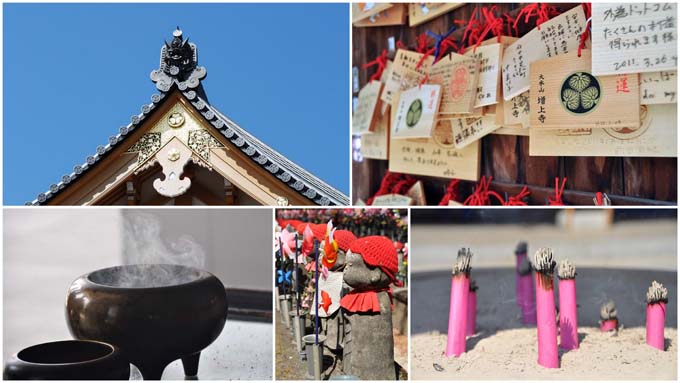 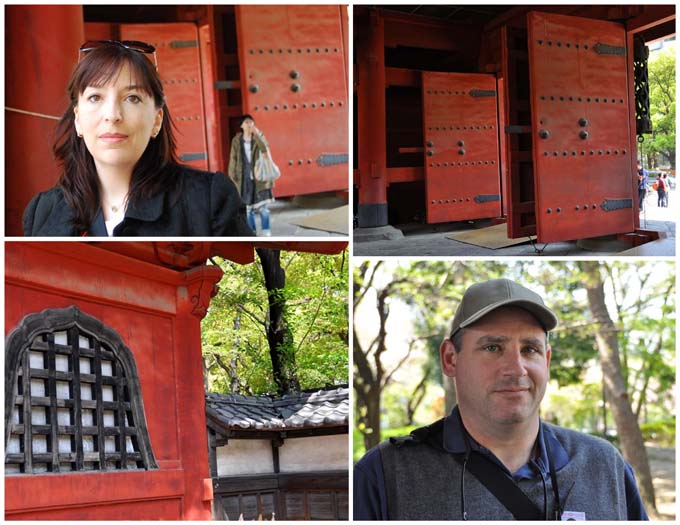 Our next stop was the Meiji Shrine, located inside Yoyogi Park. Relatively new, it was built first in 1920 by the imperial family, destroyed by Allied bombs in WWII, and rebuilt in 1958. A long gravel road leads from where the bus parks to the gigantic torii (gate), the largest Shinto gate in world. It’s a lovely walk, shaded by large cedar trees, and along the way there is an area bordered on one side by donated wine barrels of all the great French Chateaus and on the other  by brightly decorated sake barrels. 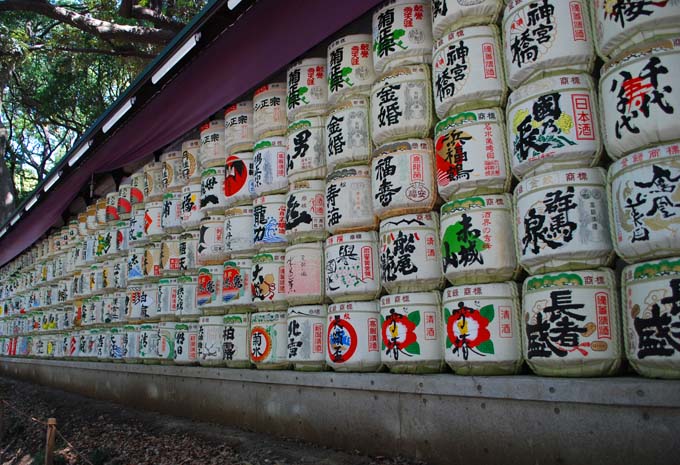 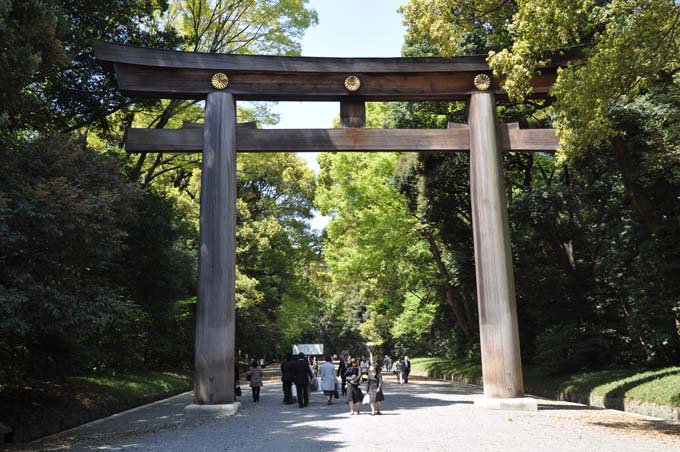 Outside shrine’s entrance, there is a water fountain fed by a natural spring and used for ritual purification before entering the inner courtyard . The guide demonstrated what to do, showing us how to rinse our hands and mouth using a bamboo dipper in the water. This was a handy piece of knowledge and experience for us and we used it on future visits to other shrines. 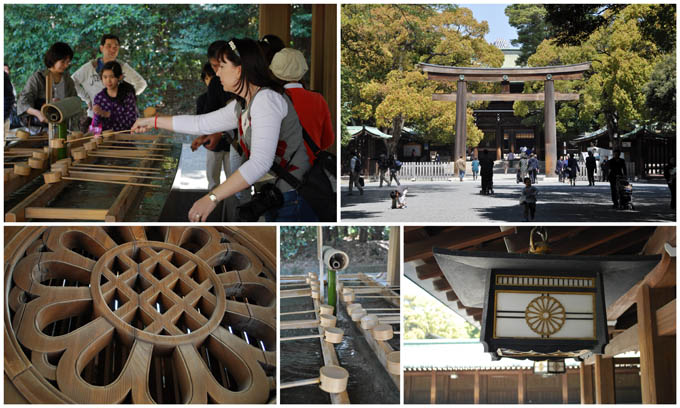 It was a sunny, beautiful Sunday in April and there were two weddings going on while we were there. We were told it was perfectly acceptable to photograph the wedding processions; the only place we were not allowed to take photos was inside the temple itself. 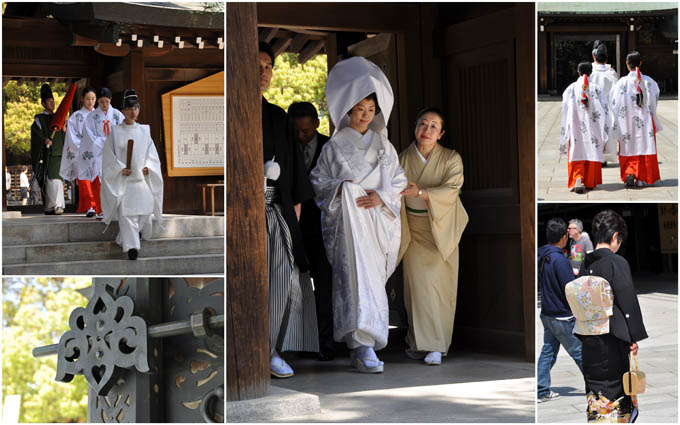 The brides were stunning in their traditional white kimonos with high heavy veils. The guide explained to us that for a traditional wedding, the bride rents the kimono for about $6000 for the day, and then rents 3 other dresses to change into during the wedding and reception. The average cost of a wedding in Japan  is $57,000, supplemented mostly by cash gifts from the guests. 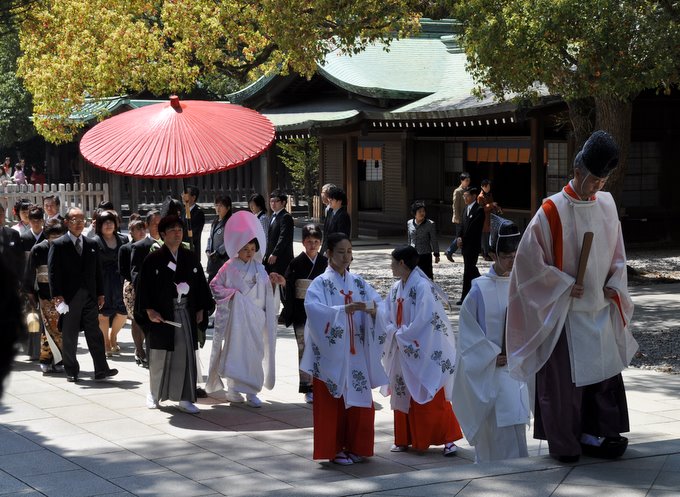 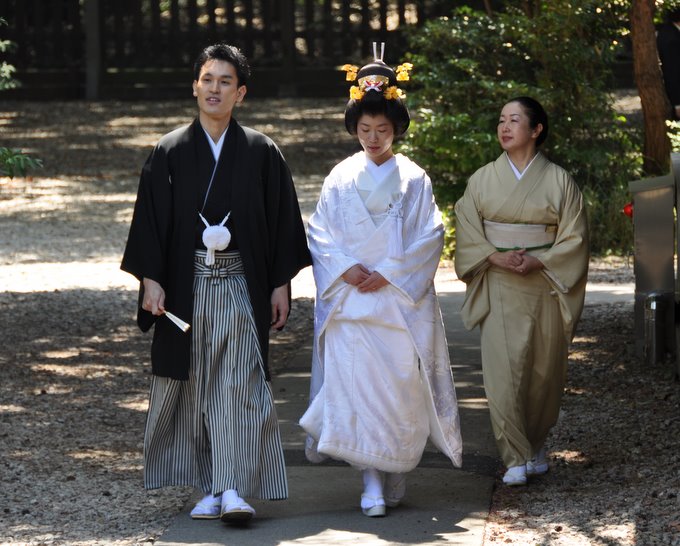 Inside the temple we were shown how to perform a traditional prayer; toss a coin into large wooden box on the other side of a gate, bow, pray and clap our hands. The guide also explained to us the wooden prayer plaques we saw hanging around (people buy the plaques, write their prayers on them and they are blessed by the monks). After that, we were given 30 minutes to walk around and make our way back to the bus. There is a snack shop near the parking lot with clean restrooms (and heated seats!), where we got a drink and a meat filled bun.

The drive by of National Diet building (like Capitol Hill in DC) was fairly boring as was the Aksaka Guest House which looks almost exactly like Buckingham Palace and is used for visiting dignitaries. More interesting was the running narration we got during the drive of what is going on with royal family. Our guide did not hold back on giving her opinion about how the press treats the wife of the crown prince or how things are changing for the Imperial family in general. 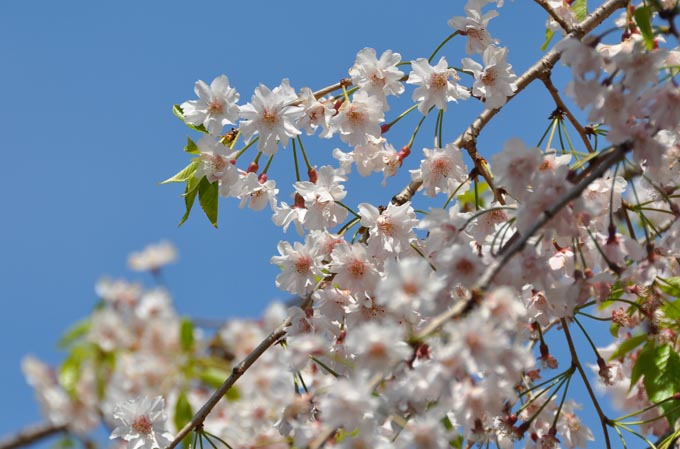 Our last stop was the Imperial Palace garden. It’s very pretty, and filled with cherry blossom trees, naturalized irises, ponds, streams, and waterfalls, which were turned off to save power. There are some very colorful carp in the ponds and we saw a swan building her nest in the outer moat of the palace. The emperor still lives in the palace, so it is not open to the public except for a few days a year. 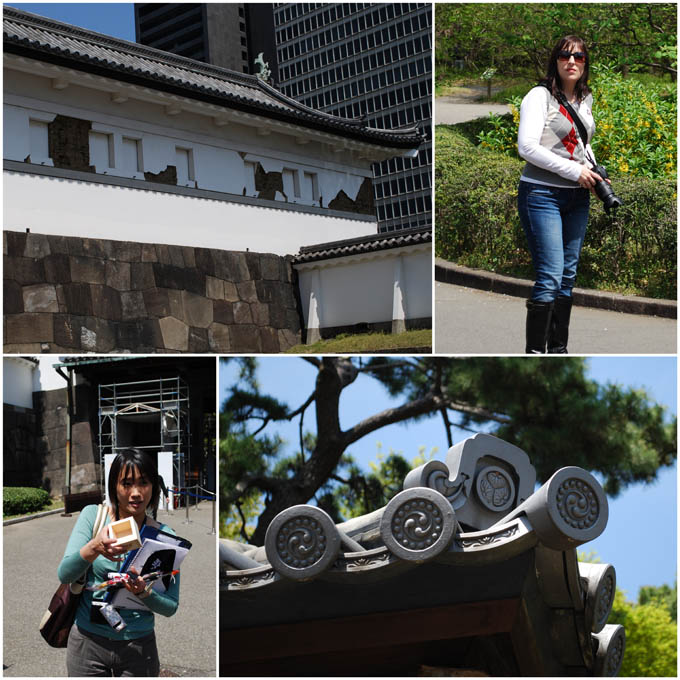 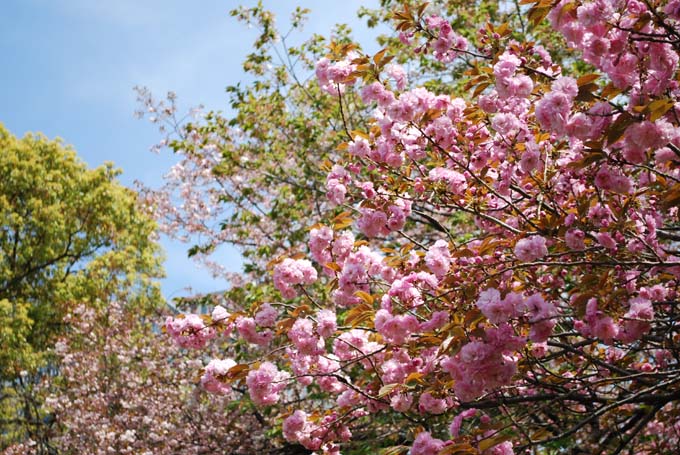 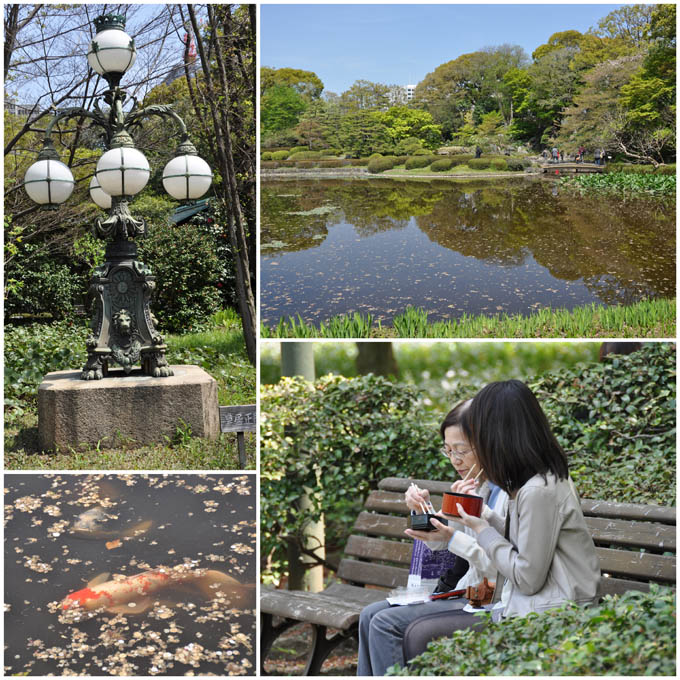 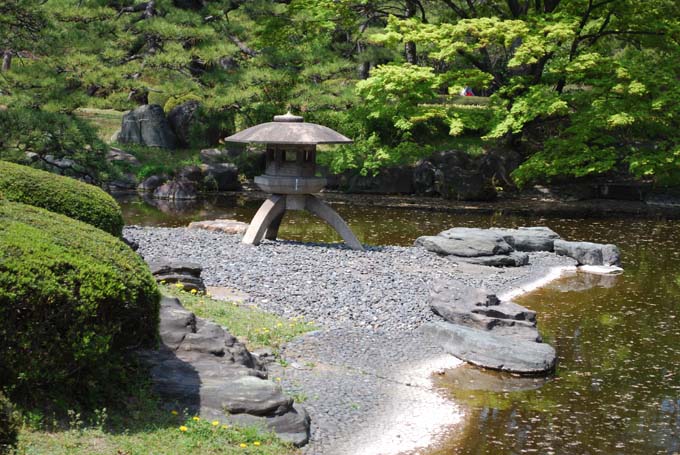 After the garden, the bus brought us to the Ginza neighborhood for a drop off around 1pm. Everyone was on their own to get back to hotel. In all, for about $50, I’m not sure if this tour would be worth the expense because many of these sites are free and can be easily seen while sightseeing on your own in the various areas of the city. On the other hand, if you are pressed for time it could be a good choice to see a lot all at once. For us, it was a nice option to have so that we did not have to think on that first morning. However, of all the places we saw, we probably would have only sought out the Meiji Shrine on our own, and while I’m very appreciative of some of the cultural information we got from the guide, we both agreed we are still not fans of the “get on the bus and follow the leader” style of travel.

Did I Fly All The Way to Japan to Have My First Meal at Denny's?